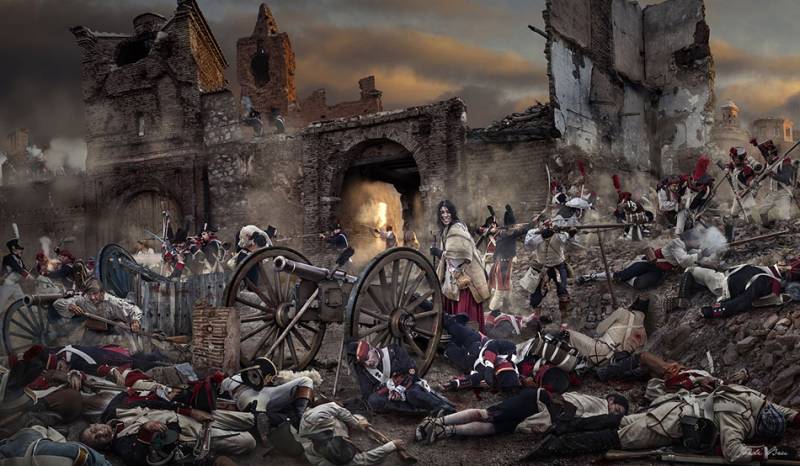 21 February 1809 ended a two-month siege of Zaragoza - one of the most dramatic episodes of the Napoleonic wars. During the siege, more than 10 thousands of Spanish soldiers and about 40 thousands of city dwellers, including militias, were killed. The population of Zaragoza in two months decreased by 70%, from 55 to 15 thousand people. The majority of these victims were carried out by the typhus epidemic that broke out during the siege, aggravated by hunger and poor sanitation. The French and Poles who stormed the city lost about 10 thousands of people, four thousand of them died in the battles, and the rest also died of typhoid.

The French army, commanded by Marshal Jeannot de Monsey, who received the emperor’s order to take the city, numbered thousands of infantrymen, four thousand cavalrymen and 43 cannons, which were combined into 260 batteries, including 22 heavy siege weapons. 60 defended Zaragoza by thousands of soldiers and officers of the Spanish regular army and 30 of thousands of local militias - almost the entire adult male population of the city.

True, most of the "regulars" were recruits who were called up for service less than six months ago and did not even have time to go through the course of a young fighter. The militias were not trained at all and were mostly armed only with cold weapons. But the morale of both was exceptionally high. The defenders had 205 guns, some of which remembered the glorious times of the Duke of Alba.

Zaragoza was an ancient fortress city, surrounded by a high stone wall with towers, and about half of the defensive perimeter wall was double. The young 32-year-old General José Palafox, the Defense Commander, did everything possible to further strengthen the city. In particular, he ordered to cut down and burn trees and shrubs, as well as - to demolish all buildings within a kilometer from the fortress, in order to deprive the attackers of any shelter. The stones of the demolished buildings went to reinforce the walls, and a deep ditch was dug in front of the walls. Also around the city built several advanced redoubts, installing part of the artillery on them.

The operation to capture Zaragoza began on December 20 of 1808, with an attack on these redoubts. The fortification of Monte Torrero was "taken on a bayonet" by the dashing blow of Polish zholnezh from the Duchy of Warsaw, who decided to demonstrate their valor to the new allies. This success allowed the French to install siege cannons there and begin to destroy the city walls with direct fire. Another Redut of San Lazaro could not be captured on the move, the Spaniards repulsed the attack.

22 December, de Moncey sent an ultimatum to Palafox demanding to surrender the city and on the same day received a concise answer "We will fight with knives!" However, the matter did not come to a stabbing between the commanders, since for some reason 29 of December de Monsey was recalled to Paris and replaced by General Junot. This general also commanded not long, after two weeks he was replaced by Marshal Lunn, who got the glory of the conqueror of Zaragoza.

By the end of December, the French surrounded the fortress with a solid blockade. Soon the city began to feel the lack of food. And then typhus came to Zaragoza, which turned out to be a more terrible murderer than the French kernels and bullets. Thousands of defenders, slain by the disease, lost their combat capability, many of them died. Meanwhile, the French guns made three large breaches in the fortress wall on the site where it was single. Understanding that, most likely, they could not keep the wall, Palafox ordered to strengthen the city buildings and connect them with underground passages, and block the streets with barricades.

By mid-January, the French had captured the advanced redoubts of Pilar and San Lazare, and their siege trenches opposite the breaches came very close to the walls. 16 January fell the last redoubt of San Jose. On January 27, a decisive battle took place: Lannes sent three assault columns into the breaches, one of which consisted of Poles under the command of General Khlopitsky. The French broke into the city, but all the streets leading to the center were blocked by barricades, and the houses along them were turned into pillboxes.

The task of the attackers was complicated by the fact that almost all the houses in Zaragoza had small windows and thick stone walls, which even the field artillery could hardly give in. The windows of the Spaniards laid bricks or sacks of earth, leaving only small loopholes for shooting. To get inside the buildings, the French had to blow up the walls with powder charges. In this case, the main burden fell on the sappers, who suffered heavy losses. In the streets and squares of Zaragoza, 165 people died, including 11 officers.

The fierce battles that turn into hand-to-hand fights began for the monastery of the brotherhood of Blessed Augustine. The monks fought on a par with the soldiers and militia, but since the Lord forbids them to shed blood, they fought with clubs, benches, censes, candelabra and other improvised objects. One Pole brother in Christ smashed his head with a heavy crucifix. However, some monks used muskets and sabers, apparently deciding that God would forgive this sin.

For several hours, the “front line” took place inside the monastery cathedral: the attackers were seated in the vestibule, and the defenders - in the sacristy, showering each other with bullets, and sometimes converging into hand-to-hand. But in the end, the best French training played a role and they captured the monastery, mercilessly killing its defenders. 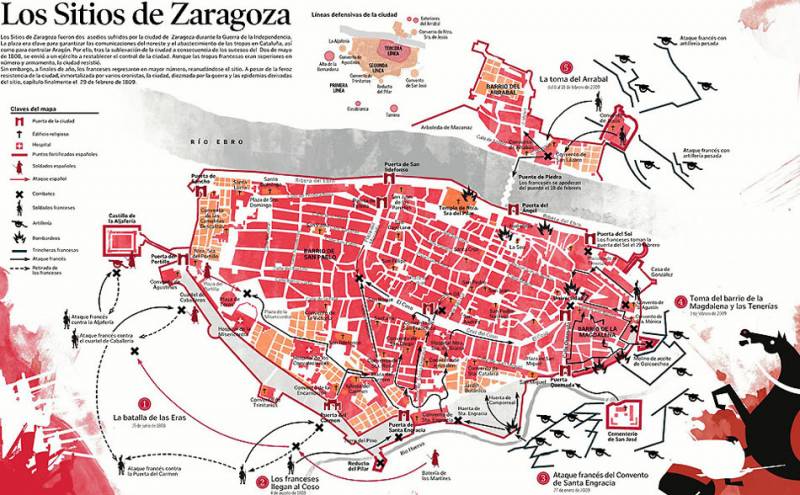 Map of the Siege of Zaragoza. Spaniards are marked in red, French in black. The explosions are places of concentration of the fire of French artillery, the crosses are the places of the most fierce fighting. 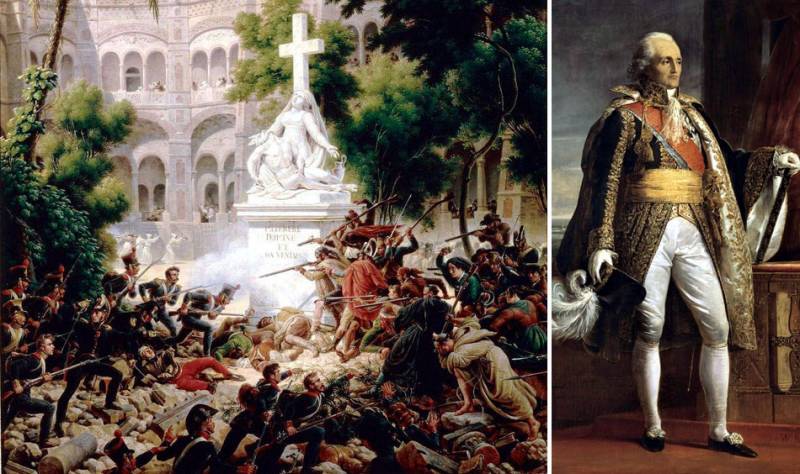 On the left - a fight in the courtyard of the Augustinian monastery, a painting by Francois-Louis Lejeune. Right - Marshal de Moncay. 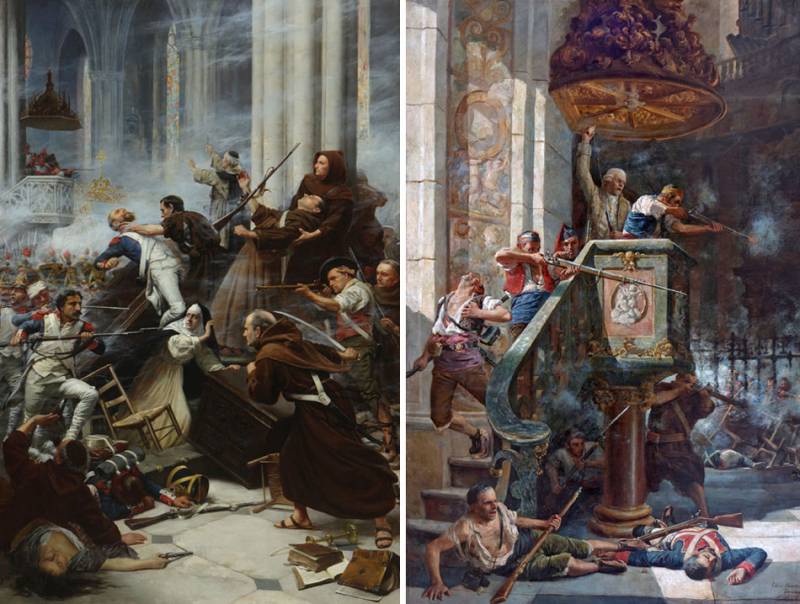 Two paintings depicting the heroic defense of the cathedral of the Augustinian monastery. 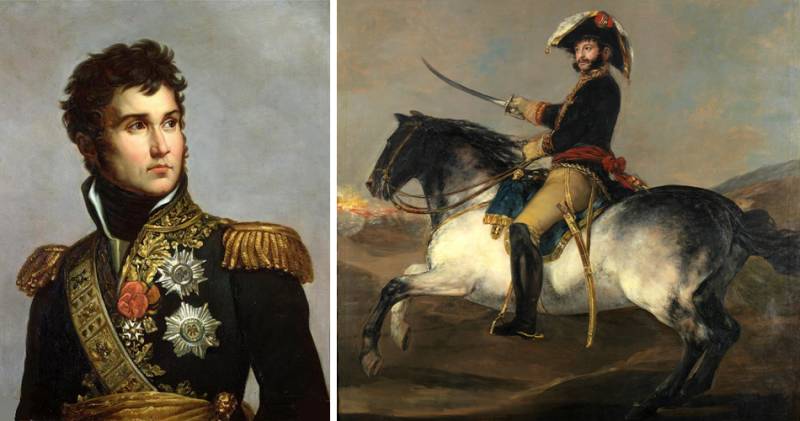