Nostradamus from the White House

February 23 2017
27
Donald Trump spoke publicly about the problems in Sweden. The Swedes, the American leader explained, had “problems,” but such problems as “they could not imagine.” On the day Trump started this speech, there were no particular problems in Sweden. Suddenly, as if Trump had trouble, problems in Stockholm were formed. 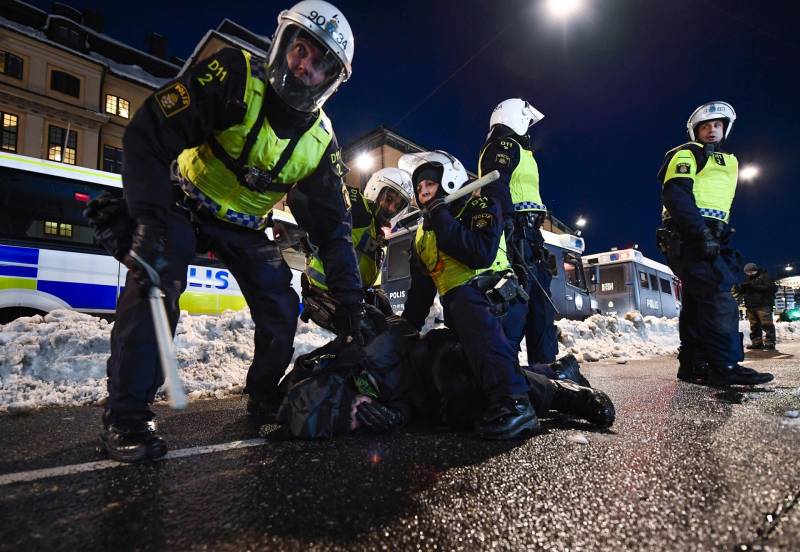 Late in the evening, 20 February in one Stockholm district, riots occurred: dark personalities (it is assumed that these were migrants) set fire to cars, broke into small shops and made looting. The signal went to the police at 20 hour. 18 min.

Stockholm policemen managed to detain a wanted person at the metro station. The detention was not approved by the “local” - and then the real battle began. The policemen threw stones at one, they injured one hand. It was in the dark. The police opened fire, the Stockholm press wrote about warning shots. No one was injured, except the aforementioned policeman who was injured.

The representative of the regional command center of the Stockholm police Eva Nilsson confirmed the newspaper "Aftonbladet" wounded by a stone of a police officer.

The peak of events came on 22: 20, when "violent riots" began in the area. Approximately 30-40 people participated in the riots. It is not possible to accurately indicate their number: it was dark on the streets.

It is reported that seven or eight cars were set on fire. Showcases were broken several small shops. These shops robbed, the owner of one of them was beaten up. Another person was beaten. They both managed to go to the hospital on their own.

After midnight, the area was cleaned up. However, the police did not arrest a single offender that night. Not even the suspects.

Police report that incidents will be investigated.

Earlier, US President Donald Trump, speaking in Florida, allegedly hinted at the terrorist attacks in Sweden.

“We need to monitor security in our country. You see what is happening in Germany. You could see what was happening, last night, in Sweden. Who could believe? In Sweden! They took too many [migrants]. And now they have problems that could not be imagined before, ”he is quoted as saying. "BBC". And Mr. Trump mentioned the terrorist attacks committed by Islamists in Brussels, Nice and Paris.

In Stockholm, however, there were no terrorist attacks. Therefore, Trump's statements about Sweden were ridiculed by the world community. Former Prime Minister of Sweden Carl Bild, for example, suggested via Twitter that Trump was “smoking something before that.”

Then Sweden’s Prime Minister Stefan Leuven spoke. "We all have to take responsibility for the use of reliable facts and verification of information that we distribute," - he threw a stone in the garden Trump. The indefatigable Karl followed again. The former prime minister wrote on his Twitter account that in Orlando, Florida, where Mr. Trump spoke, there are "more 50% murders than in all of Sweden." Not lagged behind and the American press. “Sweden is far from being the first American-friendly country that has come into conflict with the new president,” the newspaper said. "Sight" A note in The New York Times. An evil, ironic message points out the unfortunate experience of Mr. Trump’s recent communication with the President of Mexico and the Prime Minister of Australia.

Being indignant about Trump's speeches, the Swedish embassy in Washington officially appealed to the US State Department for clarification, RIA reports "News".

“The press service of the White House had to sweat a lot, explaining that Trump had in mind not a specific incident, but a general change in the crime situation in Sweden due to the influx of migrants. It was literally a couple of days, the scandal had not yet had time to forget, and riots happened in Stockholm. Of course, there were also some lovers of criminological versions who suggested that the American special services “had a hand” to provoke excesses and thus justify the unsuccessful utterance of their president, ”says Vladimir Ardaev on the agency’s website.

In fact, speaking of the situation in Sweden, Mr. Trump did not mean an event, but a documentary film aired on Fox News, notes "BBC". The fact is that Trump regularly watches Fox News, this is one of his favorite cable channels.

The President of the United States wrote on Twitter that he was not talking about terrorist attacks in Sweden, but he had sharpened the topic of migrants. “My statement regarding what is happening in Sweden was based on Fox News, which touched upon immigrants and Sweden,” he explained.

Fox News reported an increase in armed attacks and rape in Sweden after 2013, when large numbers of migrants from the Middle East and Africa began to arrive in the country. The American documentary Amy Horowitz, who commented on the decision of Stockholm to let in a large number of refugees in 2013, informed the television channel about this.

According to official figures, Sweden has already received about 200 thousands of refugees and migrants. This figure is the highest in Europe, if we bear in mind the ratio of arrivals to the number of local residents. In 2015, the number of people willing to receive refugee status in the country has greatly increased: more than 160 thousands arrived here. But in the 2016 year, the flow of refugees decreased: first, Sweden introduced border rules, which increased the time of inspections; secondly, Stockholm began to encourage materially those migrants who expressed a desire to voluntarily return to their abandoned homeland.

However, in Sweden restless due to migrants. A year ago, reminds the BBC, the country was shocked by the murder of 22-year-old Alexandra Mezher, who worked in a refugee detention center near Gothenburg. On charges of murder, the authorities arrested an 15-year-old refugee. The head of the Swedish police then asked for more than four thousand law enforcement officers to be involved in the fight against terrorism and the deportation of illegal migrants.

After throwing stones and shooting at Stockholm in February 20, Trump's statements stopped being funny. Some analysts even called his words prophetic.

On the other hand, the problem of immigrants in Europe is so acute that nostradamus can earn money by anyone.

According to Valeriy Zhuravel, a leading researcher at the Northern Europe Center of the Institute of Europe, Russian Academy of Sciences, indigenous Swedes are beginning to feel pressure from migrants, although they used to be tolerant of migration processes. Some migrants try to set their own rules. “All this causes the growth of nationalistic manifestations. Quiet Northern Europe begins to resist these processes. The saddest thing is if all this will lead to self-will over these people, ”the expert told the newspaper "Sight".

As for the statements of Trump, the American president had in mind not only Sweden, but also the whole of Europe, said Kirill Koktysh, associate professor of political theory at MGIMO. The expert recalled that "Trump has repeatedly said: the open door policy pursued by Angela Merkel is wrong, catastrophic, and will lead to negative consequences." “Now Sweden is a fairly timely illustration of what Trump is talking about,” said Koktysh.

The Swedish “rockfall” is an event, however, local. To give it the meaning of a terrorist attack or a new point of reference, after which euro skeptics will become popular in Sweden, is meaningless. The internal situation as a whole, including in politics, is stable, and the Swedes' desire for change tends to zero. In addition, new rigid border rules operate quite effectively, and the material “compensation” pushes other migrants to go back to their homeland.

On the other hand, the issue of migrants in Sweden will be exacerbated year after year. A once stable and prosperous country may be faced with the need to either abandon the idea of ​​accepting refugees or maintain a doubled police army whose task will be to protect civilians from non-peaceful ones.