On the battlefield and in the international arena ...

February 22 2017
20
February 20 turned out to be a sad day when we received two terrible at once news from battles on distant frontiers. In the morning, the Russian Ministry of Defense reported the death of four military advisers in Syria (the tragedy itself took place on February 16). In the evening, the Russians were shocked by the news of the premature death of Russia's permanent representative to the UN, Vitaly Ivanovich Churkin. 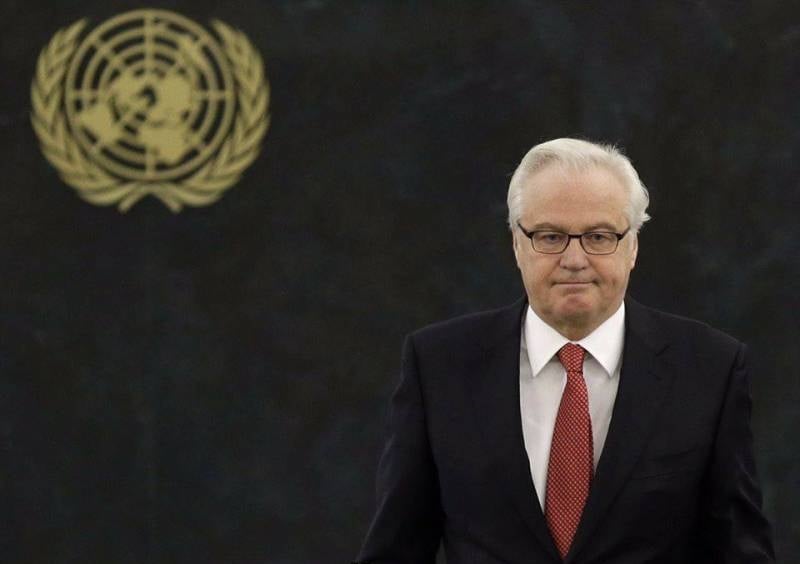 It would seem that these are different events - the death of the military in a war zone and the death of a diplomat in the workplace. But these people are united, above all, by the service for the good of the Motherland. The service they carried away from her, in those areas where it was especially hot. And in the United Nations recently there have been such heated fights that the arena of an international organization looked like a battlefield.

The soldier needs an incredible courage not to retreat under a hail of bullets, to be among the gaps, in solid smoke. A diplomat - to speak in support of his country, knowing that here, in this hall, almost everyone is opposed to it. To challenge the global "sharks". And you can not say for sure where you need more courage.

However, four Russian servicemen did not die in direct clashes with anti-Syrian militants, but during the terrorist attack. According to the Ministry of Defense, their car was blown up on a radio-controlled land mine, when the Russians escorted a convoy of Syrian troops from the airfield in Tias to the city of Homs. Two more Russian soldiers were injured as a result of the explosion.

As for the death of Vitaly Churkin, then, according to official data, he died due to heart disease. But many doubt it, considering in what lair the deceased was and worked. Of course, it is too early to accept or reject various conspiratorial versions, but this is suspicious: lately, Russian diplomats have been dying too often.

Such different corners of the planet: Syria and New York. Exhausted in the battle with terrorism, the Middle Eastern country suffered enormous losses - and the city was full of food, modern, glittering with neon advertisements ... The road between Tiyas and Homs is semi-desert, where the land is already generously soaked in blood, where a cunning mine can wait at any point. And - the hall shining with cleanliness, equipped with the best equipment, from where broadcasts are conducted to the whole world, where world problems are discussed. And we have to fight among the sands, among documents and journalists. And death - it equally lurks both there and there.

Even if we discard all the conspiracy and difficult-to-prove versions - all the same, the death of Vitaly Churkin looks exactly like a death in a battle. We all saw how in recent years he endured the most real persecution. Harassing Russia, which I took upon myself, which I certainly took to heart. It is clear that not every heart will withstand several months of such a load, and only a few years ...

Unfortunately, we once again see the mockery of death. And the “intelligent” mockery - in the same hall, where Vitaly Ivanovich’s clear voice sounded until recently. And - perfect wild mockery in social networks and even in real life - in front of the Russian consulate in Odessa (a city built under the leadership of Russian Empress Catherine II). Both there and there over the death of a citizen of the Russian Federation were mocked by representatives of the same country, poisoned by falsely understood “European values” (however, another question is how Europeans themselves understand these values ​​today).

The fact remains a fact: while even representatives of the United States and Western Europe express condolences to Russia in connection with Vitaly Churkin’s passing away (and even Samantha Power, with whom he entered into heated debates), is a country “aspiring to Europe” missed the chance to "put a pig." Ukraine has blocked an official statement on behalf of the UN Security Council regarding the deceased permanent representative of the Russian Federation. As a result, the document was adopted in a different format: as a statement to the press. "Council members mourn after, who spent more than forty years in the diplomatic service of Russia, headed the country’s mission to the UN for more than ten years, and to whom 21 February would have turned 65 years“, - said in this statement.

The official representative of the Foreign Ministry of the Russian Federation, Maria Zakharova, sharply criticized the actions of the representatives of Ukraine: “They can’t do anything good, only they spoil everything, including themselves».

The actions of the “maydauns” at the Russian consulate in Odessa are completely something beyond: the bottom has fallen even lower. It is disgusting to comment on the words of the notorious Lyashko. But you need to say about other people, even there, in Ukraine. And in the same Odessa, and in Kharkov there were those who were not afraid to bring flowers to the buildings of the Russian missions. Although we remember how people who expressed grief over the crash of the Russian plane in Sochi, were subjected to real persecution by right-wing radicals.

Yes, the battle goes on not only in the mined desert, not only in the UN headquarters and not only at the buildings of the Russian consulates. The main battle is in people's minds. Some have already lost this battle, even while remaining alive and seemingly victorious. And others - win it, despite the pain of loss, despite the fact that we are persecuted together with the Fatherland and with the abused justice. And win thanks to people like the fighters against terrorism who fell on the fronts. And such as Vitaly Churkin, who defended the position of his Motherland to the last breath