February 22 2017
6
Currently, the United Arab Emirates is hosting the regular international exhibition of weapons and military equipment IDEX 2017. During this event, the defense industry of many countries plans to present both already known and completely new models. Both recognized market leaders and less well-known players who want to receive their contracts have expanded their stands at the exhibition. An example of a new type of equipment from a company intending to win a place on the market can be considered an armored car BOV M16 Miloš of the Serbian development.


According to published data, a new armored car from Serbia was created by specialists from Borbeni Folding System (BSS), organized a few years ago, from the city of Velika Plana. The FSU enterprise is a subsidiary of a larger organization, Hugoimport - SDPR, and is developing various projects of combat armored vehicles. Some samples from the FSU are already known and demonstrated at previous exhibitions. Now the list of products of this company has replenished with new development. 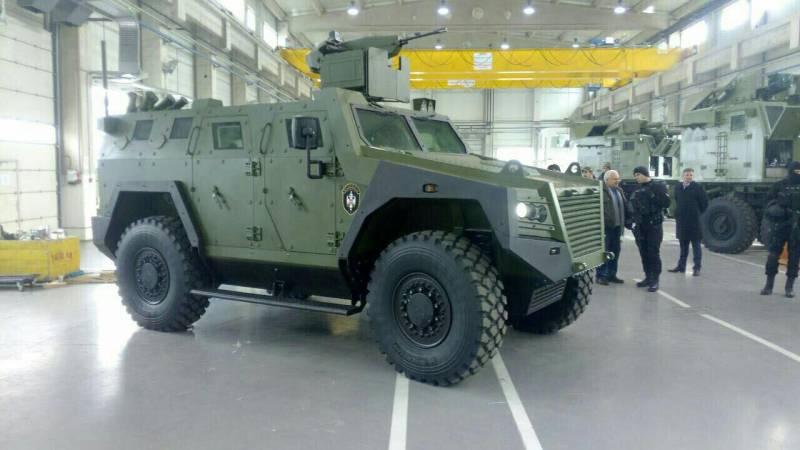 As follows from the published information, the goal of the BOV M16 Miloš project was to create a promising armored vehicle that meets modern requirements and belongs to the MRAP class. Such equipment should carry people or some goods, as well as protect them from all possible threats. The project involves the use of both ballistic and mine protection. In addition, it used some other ideas and solutions that are relevant to MRAP technology.

In terms of overall appearance, the newest Serbian armored car is a typical representative of its class, fully complying with the requirements for such equipment. This is a four-wheel drive all-wheel drive machine with a well-developed armor, built on the bonnet layout. A number of measures aimed at improving the safety of the crew. In addition, the project provided the possibility of arming armored vehicles of various types weapons with remote control. Thus, there is reason to believe that the project was created taking into account all the existing international experience in the field of MRAP-class armored vehicles.

The main element of the BOV M16 Miloš armored car, as is clear from the published data, is a bearing welded armored body designed to protect the crew and passengers from various negative impacts, as well as serving as a support for all units. The body is built on the hood scheme and is divided into two main volumes. Front, featuring smaller size, is a engine compartment. The larger rear compartment of the hull accommodates the combined cockpit and troop compartment. 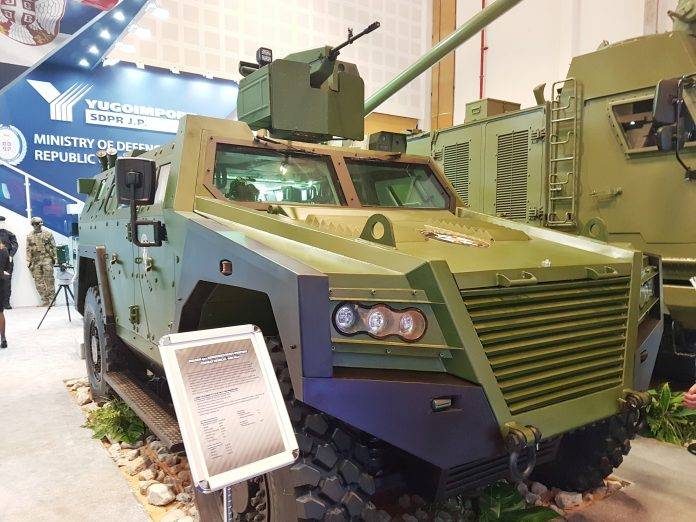 Unfortunately, accurate information about the level of protection of the new armored car is not yet available. There is reason to believe that the corps is able to protect people from firing small arms and rifle calibers. The habitable part of the body has a "mine-bottom" bottom V-shaped, designed to divert the shock wave of an explosive device to the side. The characteristics of such protection are also not specified. Probably, there is a possibility of rescuing people when explosive devices are blown up with a charge of up to several kilos of TNT.

The front part of the body housing the engine is formed by several polygonal armor plates assembled into a single structure at different angles to each other. At the same time, the hood receives the frontal grille slightly tilted back and an angled cover, which is the central section of the entire upper sheet. Directly behind the hood is the front sheet of the habitable compartment with two openings for the glasses. The habitable part of the hull has sides consisting of a larger vertical bottom sheet and a less high inclined top. The project provides for a horizontal roof and a vertical feed.

Under the hood of the Milos armored car there is an American-made Cummins ISB 300 diesel engine, which develops power up to the HP 300. With an Allison 3500SP automatic transmission, engine power is transmitted to both driving axles. The undercarriage is used with a wheel formula 4х4. Suspension of relatively large wheels is based on vertically arranged springs. All four wheel arches are almost completely located under the body. 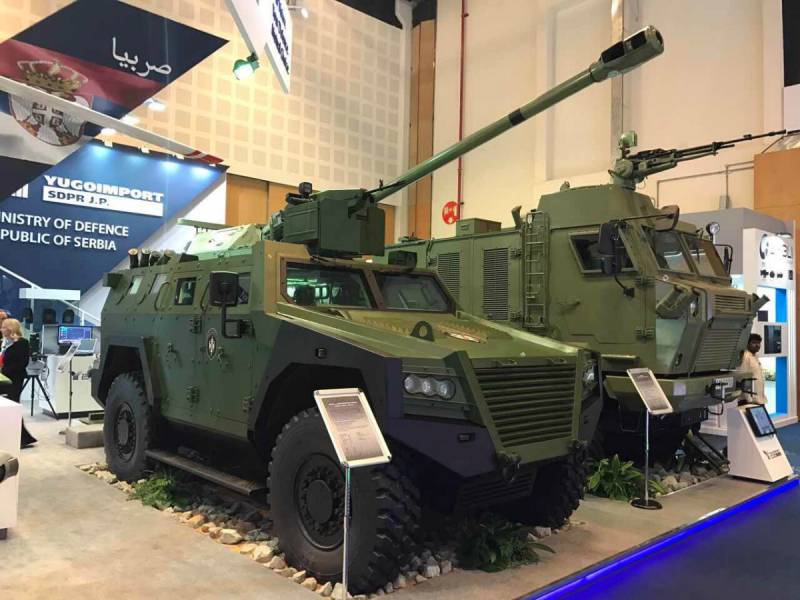 The armored car of the Serbian development has a rather large protected cabin. People are invited to be placed in several rows. So, in the front of the habitable compartment should be the driver and the commander (or the weapon operator), behind them there are two more places for passengers. Access to the seats of the two front rows is provided by side doors. A few more seats are located in the aft compartment of the hull and are located at the sides. It is offered to get into the stern with the help of a lowered ramp. In total, the armored car can carry up to eight people: four in the front compartment with access through side doors, and the same in the stern.

The BOV M16 Miloš armored car is said to be able to protect passengers from various threats. In the case of the detonation of explosive devices, additional protection should be provided with special seats that absorb part of the energy of the blast wave, as well as appropriate design solutions used in the construction of the compartment floor. So, if it is impossible to dissipate the energy of the explosion, the individual elements of the structure should be destroyed.

The crew and the landing provided a good overview. Almost the entire projection of the inclined frontal bronelista is given under two openings for glazing. Each side door has its own parallelogram glass. Four rectangular glasses are placed in the sides of the aft compartment - two in each. Under the aft windows are embrasures with movable flaps. If necessary, the seated rear fighters can use personal weapons. Other doors and body parts, however, are not equipped with such devices. 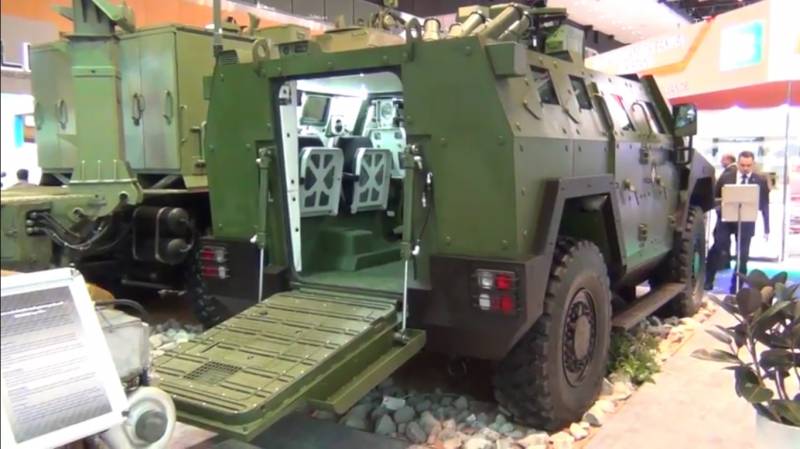 The exhibition sample of the new armored car is equipped with its own armament in the form of a remotely controlled combat module of the M15 type, developed by the “Hugoimport - SDPR” organization. This product is located in the front of the roof of the machine, with all its units are located outside the enclosure. As part of the module has a turntable, which houses the swinging casing to install a machine gun and a fixed box for ammunition. The front of the module is covered with an additional flap of characteristic shape. During the IDEX-2017 exhibition, along with the BOV M16 Miloš armored car, the M15 combat module equipped with a heavy machine gun was demonstrated.

As an additional means of protection is proposed to use smoke grenade launchers. The armored car carries six such devices with a caliber of 82 mm. They are located on the roof of the hull, above the aft troop compartment, and are directed forward.

The BOV M16 Miloš armored car has medium dimensions. The length of the vehicle is 5,48 m, width - 2,48 m, height - 2,3 m. The combat weight of the vehicle depends on the configuration and purpose. According to available data, when changing the composition of the onboard equipment and depending on the tasks assigned, the Milosz armored car can weigh from 12 to 14 t. A sufficiently powerful diesel engine allows the car to accelerate on the highway to 110 km / h. Power reserve is 500 km. 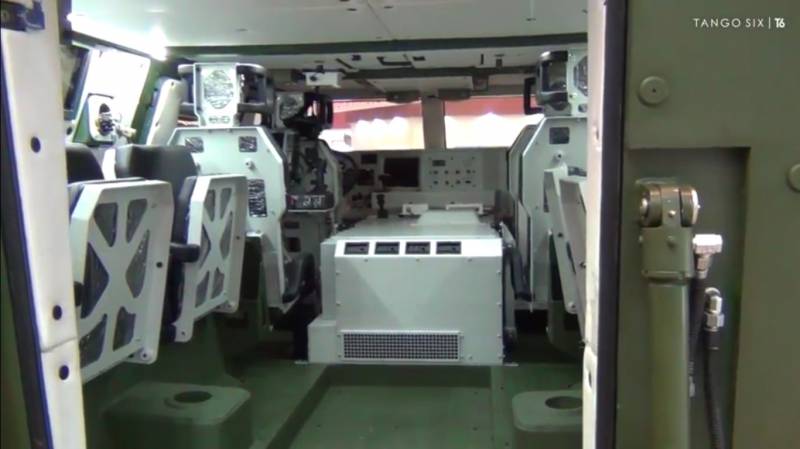 Perspective armored car from the defense industry of Serbia has a characteristic appearance characteristic of modern machines of class MRAP. Because of this, he is able to solve all the main tasks assigned to such equipment. MXOVUMX Miloš BOV can be used as a protected vehicle for transporting people or goods. He can also help with the transportation of goods, carrying out support of other equipment and being ready to take the fight. It is also possible to use armored vehicles as light reconnaissance vehicles protected from a large number of threats.

At the moment, Borbeni Compound Systems has built only one prototype BOV M16 Miloš armored car. This machine, according to some sources, has already managed to pass part of the tests in Serbia. Now they have decided to show it to potential customers at the exhibition in Abu Dhabi. Apparently, at the end of this event, the armored car will leave the exhibition hall and go back to the testing grounds for further tests.

For obvious reasons, the promising Serbian armored car has not yet become the subject of contracts for the supply of serial equipment. The machine has not yet passed all the necessary tests, because of which it can not yet be put into service or offered to order. However, the current IDEX-2017 is a good platform to showcase new developments. Armored vehicles have certain chances to interest potential buyers. 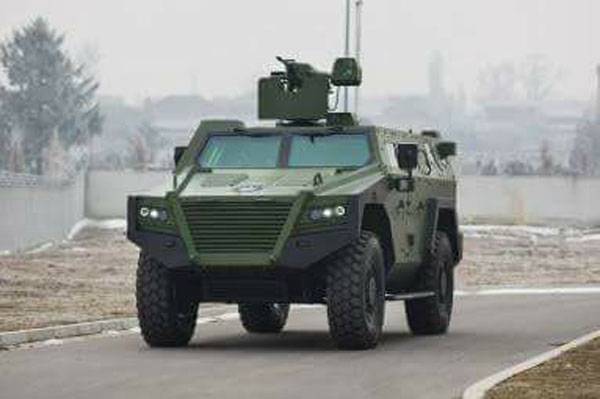 It can be assumed that the range of potential customers of the new technology will be quite wide. Many countries need MRAP technology, and the lack of own production forces them to purchase machines from third countries. Theoretically, all such states can be considered hypothetical customers of the new “Milos”. This allows developers to wait for the first orders in the very near future. The volumes of such orders, for obvious reasons, while can only be a subject of forecasts.

However, similarities with other models of their class of armored vehicles can prevent the BOV M16 Miloš car from gaining its market share or even reaching mass production. The fact is that even without this model, a significant number of MRAP vehicles are present on the international market for military equipment. At the same time, the Serbian model, as it can be assumed, has no decisive advantages over foreign developments. Thus, in order to enter the market, Serbian manufacturers of armored vehicles from the FSU and Hugoimport-SDPR will have to make some efforts. Otherwise, the prospects of the armored car may look very vague.

The first public demonstration of a promising armored BOV M16 Miloš Serbian development took place only a few days ago. Potential buyers had the opportunity to get acquainted with the new sample and draw the necessary conclusions. Probably, on the basis of these findings, new decisions will be made concerning the purchase of armored vehicles. Judging by the known data, the new project of the Serbian industry may have certain chances of receiving orders and the start of mass production. Nevertheless, the probability of a negative development of the situation is also quite large. Time will tell whether BOV M16 Miloš will be able to interest potential buyers or it will remain just another original sample with no real future.