Sevastopol. 35 battery: the story of dishonor 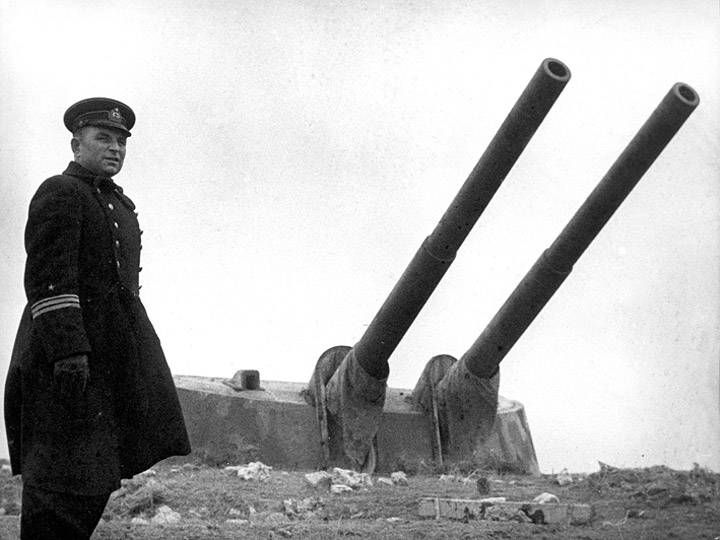 Sevastopol Golgotha ​​is called the "35 battery" the inhabitants of our city. Today, the memorial complex, built on the site of the last line of defense of Sevastopol, gained worldwide fame. Every year, it is visited by tens of thousands of people seeking to pay tribute to the memory of the heroic defenders of our Motherland. 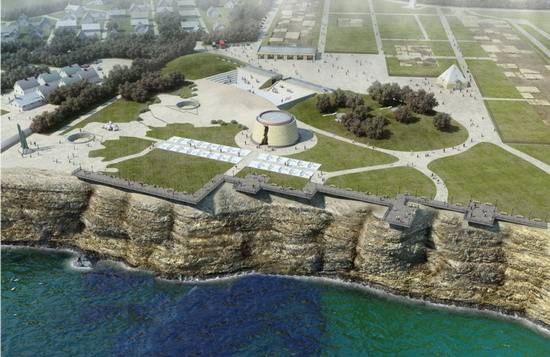 Unfortunately, not all of them know that the newest история "35 battery" is also associated with betrayal and deception. Our story is about how the place of the feat and the greatest tragedy in the history of the city has become a place to satisfy the ambitions of corrupt politicians who tried to enter the heroic history of Sevastopol from the back door.

35-I battery: how it all began

Many people of Sevastopol remember that ten years ago there was no memorial complex at the site of the “35 battery”. When members of the Patriot youth organization paid attention to him, the true abomination of desolation reigned here.

The organization Patriot was created in 1998 year, as an association of Sevastopol youth, not indifferent to the history and traditions of our city. The young guys under the direction of their senior comrades engaged in a noble cause - the search and reburial of the remains of Soviet soldiers who died in World War II. So, they were on the "35-th battery." 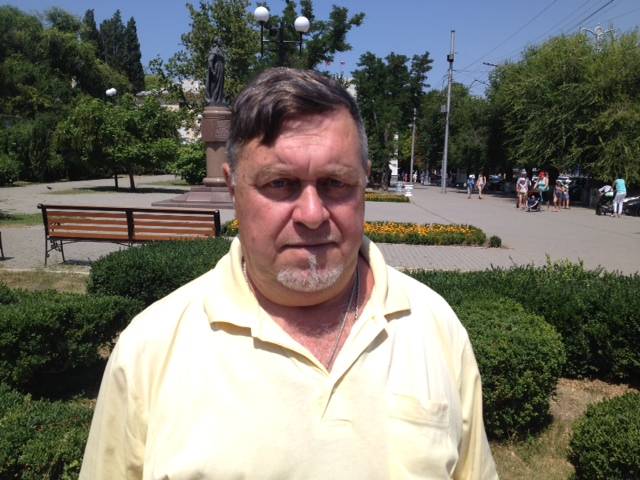 “In the 2005 year,” says the then head of the Patriot Alexander Vorobyov (in the photo), “we initiated the reburial of the remains of more than 90 Soviet soldiers who fell during the defense of Sevastopol. The 35-I battery at that time was a pitiful sight. We were amazed at how she looked. The building of the battery lay in ruins and became the object of activity of robbers and marauders. The remains of the towed structures - unique sources on the history of fortification - were cut for scrap. Unorganized excavations were carried out on the territory of the monument, both by groups and by single diggers. Around everything was littered with bones, which were removed from the ground or brought here by local residents who built cottages. ” 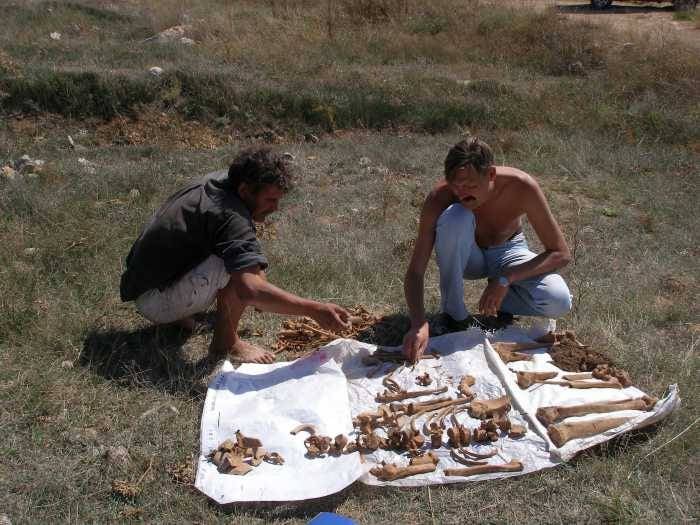 The tragic feat of the defenders of Sevastopol, abandoned to the mercy of the military and party command, was ignored for many years, so it’s not surprising that the visible symbol of this betrayal, the 35 battery, the heirs of those same commissars who ran the city until recently, tried to forget. But after 60 years after the tragic events, they could no longer be hushed up. At one time, the book by I.S. Manoshina "Heroic tragedy", dedicated to the last days of the defense of Sevastopol.

The guys from the "Patriot" decided to contribute to the perpetuation of the heroic memory of the defenders of Sevastopol. They began to look for caring people, to attract public attention. Oleg Molodtsov, a researcher at the Institute of Strategic Studies, was one of the first to whom they turned. He prepared the 35 Coastal Battery Research and Museumization Program, which included field research, the reburial of fallen Soviet soldiers, the museumification of the object, involving the best domestic and foreign specialists and turning it into a memorial monument.

The developed program received positive expert evaluations from such authoritative organizations and departments as the Regional Branch of the National Institute for Strategic Studies under the President of Ukraine in Simferopol (Director A.G. Shevchuk), the Crimean Research Search Association “Memory” (President I. Klyucharyov ), the national reserve "Tauric Chersonesos" and others.

Enlisting public support and obtaining the necessary permits, search enthusiasts got down to business. In August 2006, security and exploratory excavations and a survey of the underground structures of the 35 battery began. The works were conducted by members of the public organization "Patriot" under the leadership of Alexander Alexandrovich Vorobiev. The direct leadership of the excavations was carried out by Oleg E. Molodtsov.

At the time of the commencement of work there was not even a description of the monument. The battery was blown up in the 1942 year and was a labyrinth of underground structures that were regularly looted by vandals. In particular, the marauders cut off the metal sheets that supported the ceiling arches, which greatly complicated the work of the expedition, as the concrete layer, having lost its fixings, fell off from the ceiling with pieces. But this did not stop enthusiasts. At the end of September 2006, at the end of the prospecting, five expedition participants, using the archival plans discovered, examined the underground structures of the battery and made a description of them.

The performed works were documented in accordance with all the norms of legislation on security and search activities and gained recognition in the scientific world.

Of course, with the help of a youth organization it was impossible to implement such a large-scale project as the museumification of the “35 battery”, therefore from the very beginning the members of “Patriot” were looking for allies in this noble cause.

Alexander Vorobiev says: “We invited journalists, television, appealed to representatives of public organizations, political parties, all those who are not indifferent - Sevastopol and not only. Appealed to many. In particular, through I.F. Ermakova to Sergius Tigipko. They told about their plans openly, provided copies of the “Museumization Program” and other developed documents. Through Vadim Kolesnichenko went to the Party of Regions ... "

Addressing politicians, search engines could not even imagine that the holy theme of Sevastopol Golgotha ​​would become an object of political speculation. Wanting to realize a good thing for the city as soon as possible, they, of course, did not think that their practices, representing intellectual know-how, could be used by politicians.

Therefore, a real shock for the members of the organization was the appearance on the First Russian Channel in the “Wait for Me” program a deputy of the Verkhovna Rada of the Party of Regions, known for his “humanitarian” initiatives, who in his own name sounded the 35 battery designation museum based on the concept developed Sevastopol social activists.

Later, in connection with the project of museum certification, the surname of Aleksei Chaly was increasingly mentioned. It is now considered in bad form to recall Chaly's ardent friendship with the Party of Regions. However, in the 2006 year, the future chairman of the Sevastopol ZakSa, according to the list of “regionals”, brought his five deputies to the Sevastopol city council. Among them were, in particular, Elena Bazhenova, director of the Laspi group of companies and TC NTS, and Andrei Semenov, head of security at Tavrida Electric. Recall that the city council 5-th convocation was the most scandalous. According to the dark schemes under the strict guidance of the Party of Regions hundreds of hectares of urban land, including near the sea, in parks, squares and groves, were illegally transferred to individuals. At that time, experts called Chaly the main “purse” of the local PR cell.

Of course, having a powerful, financial and organizational resource, it was easy for “regionals” to intercept the topic: to achieve the allocation of land through the City Council, to obtain the necessary approvals from the executive authorities. At the address where Tavrida Electric is located, the charity organization “35-I Coastal Battery” was registered, which began to accumulate and raise funds for the project.

In violation of the norms of scientific ethics, people who began research work on the battery were excluded from them. Instead, they attracted other professionals. Of course, social activists tried to protest. However, they were powerless against the powerful machine of the Party of Regions that drove the city.

As Alexander Vorobiev recalls, an attempt to have a heart-to-heart talk with a regional deputy, into the hands that the “Patriot” works and which used them so uncleanly, ended up in that he “sent us in three letters in plain text ...”

The Nazis were buried with Soviet soldiers ...

The project “35 battery” from the noble initiative of Sevastopol community activists turned into an element of political PR. And for politicians, as you know, all means are good. And since it was necessary to put the object into operation, as soon as possible, right for the next elections, they simply chose not to pay attention to many important problems related to the scientific and search parties.

The level of negligence of politicians who decided to become famous on the museumification of "35 battery", says the following fact. During the search, members of the Patriot discovered the remains of three German soldiers. In a hurry, the new owners of the “35 battery” did not particularly bother with what to do with them, but solemnly buried them, according to A.A. Vorobyov, together with the Soviet soldiers, apparently took the Nazis for the defenders of Sevastopol.

Of course, it cannot be denied that Alexey Chaly made a great personal and financial contribution to the creation of the memorial complex "35 battery". But in this story, as in all others, where the name of Alexei Mikhailovich appears, it is difficult to get rid of some ambiguity. On the one hand, good intentions and good deeds, and on the other, there is an unpleasant aftertaste, a steady feeling that you have been deceived somewhere. The case that began with deception, unfortunately, continues with deception.

It is believed that a visit to the museum complex is free of charge, as indicated in the announcement in large print of the museum complex website. However, here you can read that a group visit to the monument due to limited bandwidth is possible only by prior arrangement. As representatives of the Crimean travel agencies told us, these agreements include the compulsory payment of a charitable contribution of 800 rubles from one group, regardless of its size. At the same time, unlike all other museums, money should not be transferred on the fact of a visit, but only on a prepaid basis, after which the travel agency receives an approved schedule for the season. But the group may not gather, and the money is transferred forward, and no one returns it, since the funds are issued as “charitable donations”. Of course, donations can be considered symbolic, and they are unlikely to fully cover the costs incurred by a charitable organization. But control over the funds received in the form of charitable contributions, as is known, is not as strict as in the case of doing business. Yes, and taxes from charitable donations are not charged. So, there are new questions.

For many years it was customary to keep silent about the tragedy of the defenders of Sevastopol. But the truth can not be hidden and silenced. Therefore, we are confident that the newest history of the “35 battery” will sooner or later be made public without bills and defaults.