February 20 2017
22
The double standards of the West are today expressed everywhere, and the Munich Conference is anything but a forum on international security. If security was discussed, only the West: will it collapse or not? For today it is threatened with numerous challenges that are nothing but the sovereign interests of non-Western countries. 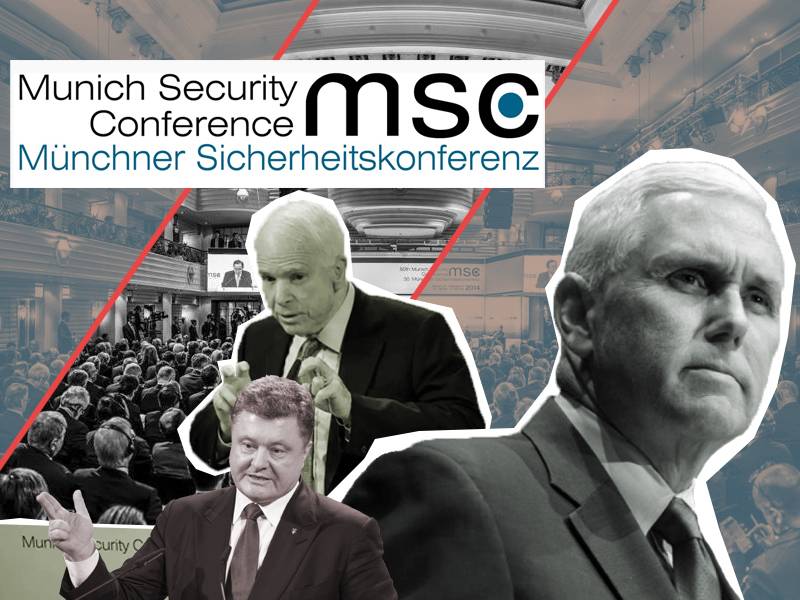 In Munich, they discussed the political binomial theory of Newton: how to maintain the domination of the West in the world? Translated into a politically correct, tolerant Atlantic language, this is called the preservation of the "liberal world order." The answer is simple, because it is obvious: for this, non-Western threats to the West and its “liberal order” need to be eliminated, leaving free hand in international affairs exclusively to Western countries.

To do this, you must somehow take the sovereign interests of countries that conduct policies independent of the West, dare to have their own opinion, even in their own internal affairs, under the "international" control. The biggest threats to the West in this regard are Russia and China, and not terrorist LIH at all. This is how Obama posed the question, which is why the formally anti-Obama approach to international politics, declared by President Trump, frightened the Western Atlantic and globalist elites. After all, Russia and China are in general civilizations alternative to the West, do not Donald Trump understand this?

Trump did not attend the Munich Conference, sent US Vice President Michael Pens, who somewhat calmed the Atlantic elites, making a tough statement: "We must make Russia responsible and demand the implementation of the Minsk agreements."

It turns out that President Trump’s new policy declares the continuity of Obama’s international policy, they just want to ensure America’s dominance in other ways. What then is trump for us better than Obama and Clinton? Many are convinced that they are for Russia, by Stalin’s definition, “both worse” ...

Actually, Russian observers, including myself, have always said that Trump will defend the interests of America, so you should not expect from him the pro-Russian steps that many of our patriots for some reason are waiting for. Trump was a lesser evil compared to Clinton, and today this is fully confirmed: along with tough statements by members of the Trump team, they always add at the end a phrase about the need for dialogue with Russia, Michael Pence did so. We did not hear from Obama and his team.

It is also very important that Trump, and the elite group behind him, set out to rebuild the system of ensuring America’s interests in the world on the new principles: “Let's make America great again! First America! ”They hope to maintain the achieved positions in the world, and even to multiply past successes, however, what the“ American perestroika ”will end in is impossible to predict, we know this from the experience of Gorbachev's perestroika.

It is obvious that the Trumpian restructuring of America and its system of domination in the world opens a window of opportunity for Russia, China and, in general, the whole non-Western world. It is well understood in the West, Anatoly Chubais told us about the real “horror in Davos”, where his colleague shared this horror: “Trump has two options: either he will give up everything he said, or he will lead us all to catastrophe” .

Davos elder, 86-year-old George Soros declared an all-out war in Switzerland for Trump, called him "a potential dictator and a crook", in line, apparently, hanging on Trump the label "bloody dictator"? Trump, in turn, announced a number of American media, including CNN, the enemies of the people! What is it? We see the beginning of “American perestroika” ...

The Obama line at the Munich Conference was represented by Senator John McCain and his political vassals, however, after the defeat of Trump, they retreated into second roles. Most of all, Petro Poroshenko tried to prove himself, who turned to the individual, accusing the Russian president of "hatred of Ukraine" and the desire to "punish the desire to live independently." This time, Peter lied in half: one can say that Moscow is indeed punishing Kiev, but for striving to sell itself to the West as a military springboard and vassal.

According to Ukrainian political analyst Vladimir Skachko, Poroshenko proposes himself as a sort of “tip of Russophobia” to stay in power, he fears his Nazi patriots, and hides behind desperate Russophobia in order to appear more radical than the nationalists themselves. As far as he succeeds - we will soon see.

Vladimir Putin quickly responded to Poroshenko’s hysteria: he issued a decree on the temporary recognition of passports and other LDNR documents in Russia, before Kiev fulfills the Minsk agreements. We note that Moscow made this move on the eve of the meeting of foreign ministers in the “Norman format”, as a message to this “format”. Or an ultimatum?

So, will the West retain its “liberal” domination in the world under President Trump? The Munich Conference did not give an answer to this question, such questions are not solved at conferences ...