Kosovo: Balkan stranglehold on the neck of European security 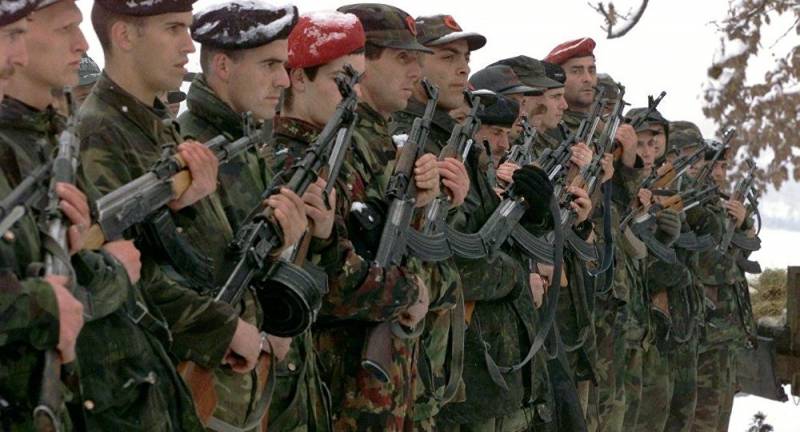 Kosovo parliament decided to create an army and join NATO

The parliament of the unrecognized republic of Kosovo at the regular session adopted a resolution on the establishment of the Armed Forces on the territory of the region. According to the document, the formation of a full-fledged army is to be held at the base of the Kosovo Security Force (SBC).

“The Kosovo government is empowered to start coordinating and submit to the Parliament for approval a strategy for the transformation of the Kosovo Security Force (KSF) into the Armed Forces,” reads the text of the resolution.

For the adoption of the resolution, both deputies from the ruling coalition and representatives of the opposition forces, except for members of the “Serbian list”, representing the interests of the Serbian people in the Kosovo legislature, voted. In addition to creating their own Armed Forces, the authors of the bill plan to “organically integrate” the army into the military structure of NATO forces.

Such a responsible decision for a self-proclaimed state, whose sovereignty is far from being recognized by everyone both in the UN and privately, is based on the official statement of the President of Kosovo, Hashim Thaci, about the alleged Serbian-Russian military threat to occupy the province. “Russia and Serbia may be starting a new armed conflict in the Balkans, with preparations already under way. Under the pretext of threatening the security of Serbs, Serbia openly threatens intervention and occupation, ”said Thaci. In addition, the Kosovo leader claims that with the help of Russia, Serbia plans to split Kosovo and seize its northern regions. Hashim Tachi states that Moscow has successfully applied this practice in the Crimea and in the South-East of Ukraine.

The statements of the “pristin godfather” (before the policy of Thaci was widely known as a major functionary of one of the Albanian criminal groups operating in Kosovo) about the Russian-Serbian threat against the background of the fact that neighboring Montenegro already has one foot in NATO hysterically. But, of course, the surge in militarization of Kosovo will not remain without attention and relevant conclusions from Belgrade. Therefore, why build up an already complex situation in a restless region?

On the other hand, the desire to join the North Atlantic alliance by building up combat capabilities and increasing armed formations is a pernicious business. First of all, for its economy, since military spending traditionally requires extremely high costs and infusions, and the resources from Pristina - the cat wept. One can only imagine what kind of “invincible and legendary” army Kosovans will create, which is destined to “organically integrate” into the NATO military system. More decent than this army, perhaps, will be perhaps the Baltic soldiers.

Note that the situation with Pristina, in part, is similar to the events unfolding in Montenegro, whose government seeks to join NATO and the EU as soon as possible. Milo Djukanovic, like Hashim Tachi, in the past, an authoritative mafia, who made a decent fortune by smuggling cigarettes (for which he was even charged with a criminal case in Italy), pulls the country into a military alliance with NATO and Europe. Both there and there - leaders, similar in biography and behavior. Rather, puppets in Western deft hands, who skillfully direct the policies of small but “independent” states.

Throughout this Balkan geopolitical game, there is a clear flaw in NATO puppeteers who sow the blessed grains of democracy around the world: first, if they manage to hook Montenegro to the bloc by hook or by crook, then if the conflict escalates to any kind of conflict, the Montenegrin people will the same as Serbian, will stand on their historical and cultural ideals; secondly, the situation with Kosovo cannot in any way contribute to stabilizing the situation both in the Balkans and in Europe. Rather, on the contrary, by supporting the militaristic spirit of the criminal elite in Pristina, the West will only unleash a regional conflict, representatives of different forces will be drawn into it, taking into account geopolitical interests, which will lead to a new crisis on the peninsula. And, thirdly, no matter how much the military-political leadership of NATO covers up with its well-intentioned intentions, but in this case the continuing expansion of the bloc's advance to the East is evident. Including the attempt to cut off Serbia as much as possible from the sea and from land from the possible support of the closest ally - Russia in the event of a military threat to Belgrade.

We can only guess how the Pristina initiative to build his army will be completed, but the only thing we can assume for sure: the Serbs, who live compactly in the northern part of Kosovo, won't just sit back.