Photo shot at a Russian diplomat

February 20 2017
13
The mission of a photojournalist is to capture the truth as it is. But it is, however, often too bitter. And photographs in this case are such that it is difficult to look at them. 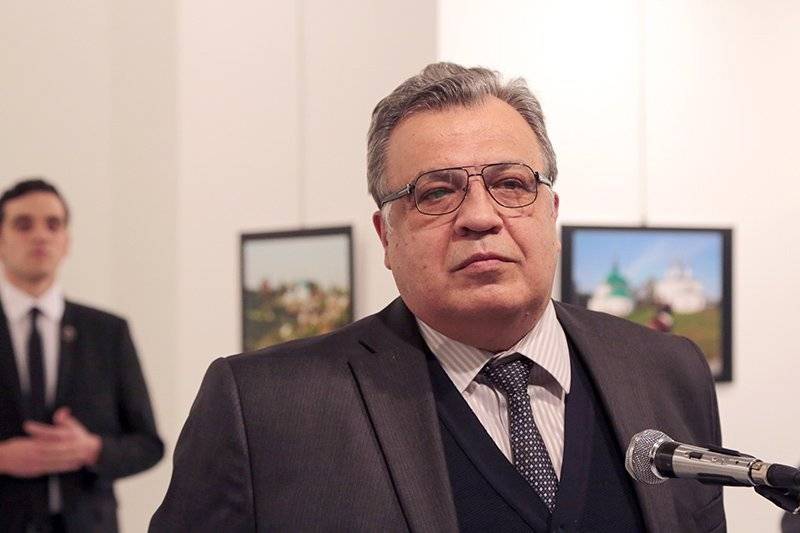 Look at this photo. Its author is The Associated Press correspondent Burkhan Ozbilichi. This frame could be called "a few seconds before death." 19 December 2016 of the Year ... Russian Ambassador to Turkey Andrei Karlov speaks at the photo exhibition in Ankara. Behind him is a vague figure of a man in black - the future killer.

But ... Whether this strongest picture did not participate in the World Press Photo competition, or the jury did not pay attention to it. A completely different photo won, reflecting the same event. A photograph that focuses on a murderer, not a dead man.. The terrorist Mevlut Altintash, triumphant over the body of his victim, waving a smoking pistol, raising his finger and shouting extremist slogans. 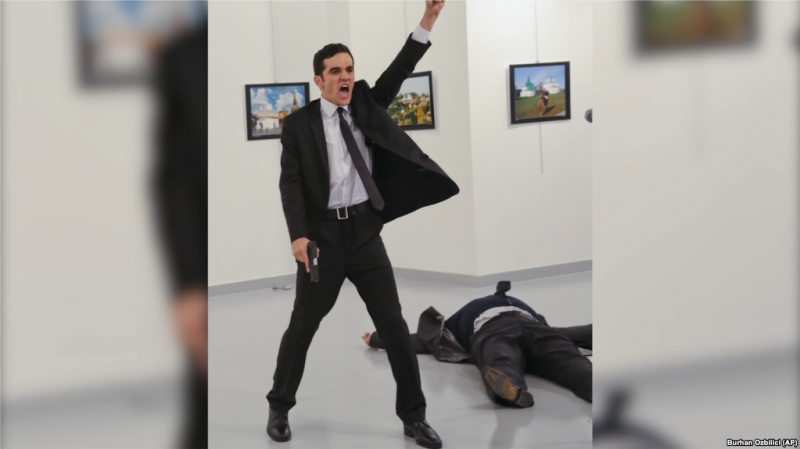 Of course, this is a strong frame. Without a doubt, reportage photo is stronger, the more dramatic the plot depicted on it. “And yet, nevertheless, nevertheless ...” If a terrorist were not eliminated, but captured and sat in a prison cell, he would have been pleased with the victory of the photograph of Burkhan Ozbilich at the World Press Photo competition. He would have been pleased with the choice of the jury (or the choice of the photographer himself, if he presented exactly this frame from the whole of his tragic report).

At this competition in the genre of reportage photography and previously won the work of journalists who captured the nightmarish, tragic events. But, with rare exceptions, the main characters of these photos were the victims of crime, not the criminals. In this case, it turned out the opposite.

In particular, the frame is compared with the work of photographer Yasushi Nagao, who won at the same competition in the distant 1961 year. His work also received the prestigious Pulitzer Prize. It reflects the murder of the extreme right-wing terrorist of the Socialist Party of Japan, Inejiro Asanuma, during a political debate in Tokyo on October 12 1960. But even in that photo there is no such frank and impudent triumph of the murderer. 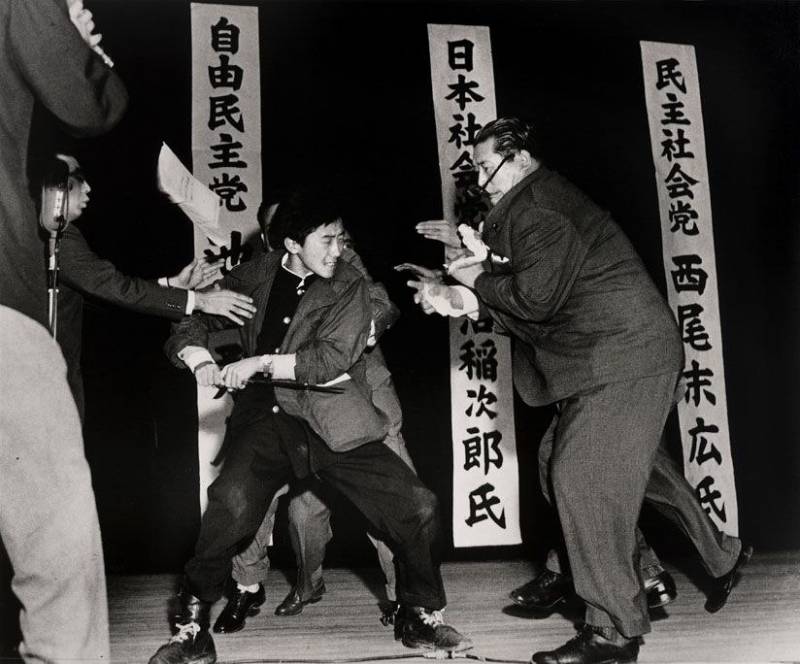 Let's go back in our time ... Chairman of the jury Stuart Franklin condemned the decision of his colleagues who voted for the photo of the murder of Andrei Karlov. He called her incredibly tough news I couldn’t do anything with the opinion of the majority.

Expressed against this decision and the staff of the Russian Embassy in Turkey. They stated: "The choice of the jury World Press Photo discourages. Complete degradation of morals and moral values. We deeply regret that in the pursuit of fame, giving away rottenness, any means are used. Propaganda of the terror of terror is unacceptable.».

The head of the Foreign Affairs Committee of the Council of the Federation of Russia, Konstantin Kosachev, noted that this situation had “causedfeeling of disgust", and - "sense of horror in understanding how many more terrorists can be inspired by the photo itself, and the jury's high mark". Kosachev added that this is - "beyond morality».

Russian senator and famous TV presenter Alexei Pushkov wrote in his blog on the Twitter website that the jury’s decision was “moral wormhole».

It would seem that members of the jury did not want to openly demonstrate Russophobia. They took a picture of the year photo frame, expressing, in their words, "the hatred of our time».

But, if we recall the already mentioned snapshot of the assassination of the leader of the Japanese socialists, it should be noted that the victory of this frame was during the Cold War, which was fought not only against the Soviet Union, but also against socialist and communist ideas in general.

The current victory of the cruel snapshot of Burkhan Ozbilichi takes place against the background of Russia's total defamation, in particular, its role in Aleppo. Namely revenge for Aleppo and explained the terrorist who killed Andrei Karlov, his monstrous crime.

From our point of view, the killer is an unconditional villain. But there were those who rejoiced in the murder of a Russian diplomat. First of all, they are supporters of Islamic radicalism, including the ISIL organization, which is banned in the Russian Federation. And also - "Nebrat", ready to welcome even the most cruel deed, if it is committed against Russia. And this situation, unfortunately, may inspire new terrorists to the so-called "acts of retaliation." Those who awarded the prize should have thought about it.

In the world of fine art - a lot of masterpieces, created based on the tragic scenes. These masterpieces cause catharsis - purification of suffering. But, say, in painting there are additional opportunities to place specific accents, to portray a hero as a hero, and a villain as a villain. Photography, basically, reflects everything as it is (unless it is a deliberately staged image, the purpose of which is to manipulate public opinion).

And so the tragedy of Andrei Karlov came into the lens. In the very picture, it would seem, there is no assessment of what happened. Still, the viewer's main attention is focused precisely on the killer. Unfortunately, in present conditions it looks like the propaganda of terrorism.

There is no direct fault of the photographer who captures the tragedy. But all the same - in fact, another shot was made at the late Russian diplomat. This time - photo shot.