February 20 2017
7
By the beginning of the First World War, the German army was armed with a large variety of large-caliber guns. In addition, there was a certain amount of special power artillery. The existing artillery was distinguished by sufficient firepower, but the effectiveness of solving combat missions was adversely affected by the not too high mobility of such systems. Several solutions were proposed to solve this problem, including the installation of existing tools on railway conveyors. The first version of such a weapon was the 15 cm SK Nathan system.


Soon after the start of the war, an original way was proposed to increase the firepower of artillery formations, which did not require additional costs. As a means of enhancing land artillery, it was proposed to use specially modified naval guns. The installation of a ship or coastal gun on a wheeled carriage made it possible to ensure the transfer to a specified position with the further destruction of specified targets. However, the implementation of such a proposal was associated with certain technical difficulties.

The fact is that the requirements for naval guns differed markedly from those for the ground. The artillery of a ship or coastal battery should have been distinguished by a long range of fire and the possibility of armor penetration. There were no significant restrictions on the dimensions and weight of the structure. In connection with such features, the adaptation of naval guns to the new role turned out to be quite a complicated matter. For the effective use of the existing system, it was necessary to develop new means of transportation, and also to find suitable tractors.

15 cm SK Nathan complex in firing position. The conveyor design is visible and the coulters fixed on the ground

In 1915-16, a new idea was proposed and developed regarding land platforms for naval artillery. It was proposed to recall the previously used special transporters on the basis of the railway platform. The tractor, accordingly, should have been a locomotive of the existing model. This technique first appeared in the middle of the XIX century and showed itself well. Railway guns had high firepower with a sufficiently high mobility. The gun could be delivered to the desired area in the shortest possible time. The only limitation in terms of mobility was the need for the presence of railway tracks.

The first mass-produced railway cannon for the German army was developed by the Krupp concern. In accordance with the weapons designation system existing at that time, the complex was named 15 cm Schnelladekanone L / 45 in Mittelpivot-Lafette (“15-cm gun of fast reloading with a barrel of 45 caliber on a rotating installation”) or 15 cm SK. Also, the project was named Nathan. According to some information, some serial weapons subsequently received their own names, in which one or another “last name” was added to the name Nathan.

As a basis for a promising gun mount, it was proposed to use the railway platform of the original design. In its composition both existing assemblies and aggregates, as well as completely new products should be used. In particular, it was necessary to develop a frame from scratch that fully meets the new requirements. The proposed platform could join any existing locomotives and compositions, which gave corresponding results in terms of mobility.

A characteristic feature of naval guns was increased firepower and a corresponding recoil momentum. It was proposed to solve this problem by fixing the entire gun mount in place. The platform complex 15 cm SK Nathan did not get the jacks for hanging above the tracks. The transfer of recoil to the ground was to be carried out with the help of several anchor openers on the chains. Chains were attached to the sides of the central part of the platform. Vomers should be driven into the ground, pulling the chains. Such means of stabilization did not differ high performance, but were fairly simple in production and effective from the point of view of application.

In the center of the platform, the authors of the project placed a king pin for mounting a rotary gun mount. It was proposed to mount the gun on the cabinet and complete it with some additional units. To protect the calculation and the breech of the gun to the turning part of the installation was attached a large armored cabin, which has a rectangular floor of great length, as well as relatively high frontal and side plates. There was no aft leaf, but for greater security of the artillerymen, the cabin was equipped with rear railings. When performing a horizontal pickup, the cabin was rotated along with the instrument.

All these technical tricks were necessary for the correct and convenient use of existing 15 cm L SKN / 45 naval guns. This gun was developed in the middle of the first decade of the 20th century and was intended to arm promising ships of various types, as well as for use as part of coastal batteries. For use with the instrument offered seven options for tumbling installation with various design features and capabilities. Four installation options had a completely closed tower, three more - shield cover. Systems with similar architecture differed from each other by guidance systems and, as a result, by permissible elevation angles, which had a corresponding effect on the maximum firing range. 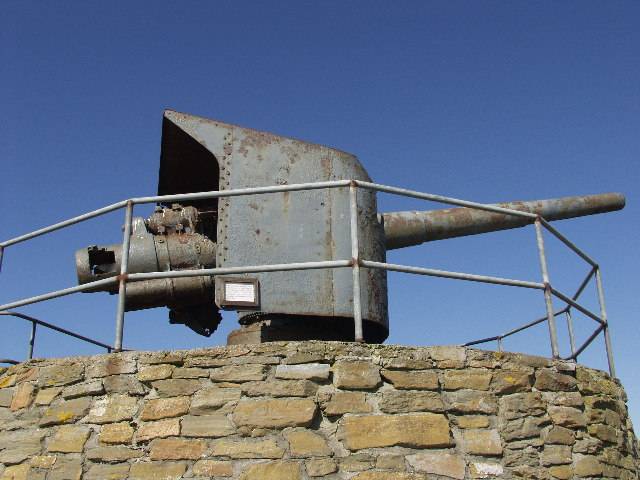 The 15 cm SK L / 45 cannon had a barrel with a 149,1 caliber mm long 6,71 m (45 calibers). The rifling pitch varied from 1120 mm at the breech breech to 605 mm at the muzzle. A horizontal slide was used. The gun used separate loading and could use various types of ammunition. The maximum initial velocity of the shells reached 840-850 m / s. The firing range, depending on the angle of elevation and the type of projectile, exceeded 22,5 km.

In the prewar period and after the outbreak of the First World War, several types of 149-mm shells for various purposes were created. Marine and railway weapons could use 40 or 51 kg armor-piercing shells, high-explosive 40- or 44,9-kg shells, as well as fragmentation ones with similar parameters. The shells carried an explosive charge with a mass up to 3,9 kg. For throwing ammunition used liners with a variable charge, the maximum mass of which was 9,9 kg. Regardless of the type of projectile, the rate of fire reached 4-5 rounds per minute.

The design of the gun mount, mounted on a railway platform, made it possible to carry out a roundabout of the gun. However, due to the high recoil power and some other factors, it was possible to shoot only when the implement was turned perpendicular to the tracks or with a small deviation from such a direction. In this case, an optimal distribution of the mass of the tool and the recoil momentum on the installation design, rails, soil and coulters was ensured. Elevation angles varied from 0 ° to + 45 °.

By its dimensions, the 15 cm SK Nathan railway cannon corresponded to standard flat cars. The mass of the complex without ammunition reached 55,5 t. Such dimensions and weight allowed to operate the system on any existing railways and transport it with all existing locomotives, both separately and in trains. The minimum serviceable composition consisted of a locomotive, a gun conveyor, as well as a separate car for ammunition transportation and calculation.

The 15 cm SK L / 45 cannons were mass-produced for several years and used to arm several types of warships. The presence of serial production, as well as the rejection of the construction of some ships, made it possible to fairly quickly launch the production of new military equipment. The first samples of the railway system "Natan" were built already in 1916 year, and soon they became part of the artillery units of the army. They were supposed to be used as a mobile means of strengthening field artillery.

The ground forces from the very beginning showed an interest in the original design, which accordingly affected its future. The production of 15 cm SK Nathan railway installations continued until the 1918 year and was completed shortly before the end of the war. During this time, the concern Krupp has made at least 21 installation. A more accurate calculation is not possible for several reasons. Serial installations of a new type, in general, corresponded to the original project, however, as they were released, the design of the equipment was being finalized. Railway guns could differ from each other in the design of the stand, felling, guidance systems, etc. The overall look, however, remained unchanged and corresponded to the original project.

Details of the operation of two dozen railway installations 15 cm SK Nathan are unknown. It can be assumed that such weapons were used in various operations, where they worked together with field artillery on other carriages. The relatively high firing range made it possible to strike at various enemy targets using the existing railway network, and also without being exposed to a serious risk of a retaliatory strike. A good rate of fire, in turn, allowed in the shortest possible time to send a large number of shells to enemy positions. After completing the shooting, the gunners could quickly leave the position.

However, the Nathan system was not without flaws. Perhaps the main were the specific characteristics of the shells. The 15 cm SK L / 45 cannon was originally designed as a weapon for ships and coastal batteries, which affected the design of its ammunition. The existing 149,1-mm projectiles had thick walls and carried an explosive charge of no more than 3,9 kg. Such a projectile could be used against armored ships and some ground fortifications, but for other tasks, the power of the charge could be insufficient. For example, in the fragmentation and high-explosive impact of the projectile guns, Nathan could be inferior to the ammunition of other systems.

There is reason to believe that when used at the front, rail guns could show acceptable results, but the small number of such systems in comparison with other artillery samples did not allow leaving a noticeable mark on stories one or another battle. Field guns of smaller caliber and other power were in the army in much larger quantities, which affected the ratio of results. Nevertheless, due to the large caliber railway systems proved to be a convenient means of strengthening the existing field artillery.

It should be noted that one of the "competitors" of the system on the railway platform could be another modification of the naval gun. On the basis of the existing model, an 149,1 cm Feldkanone IR gun was created using a towed wheeled carriage. According to its characteristics, such an instrument was similar to the Nathan system, but there were some differences, primarily related to the characteristics of transportation.

The 15 cm SK Nathan train guns, which became the first representatives of their class in the German army, confirmed the viability of the original idea and showed the fundamental possibility of continuing work in this direction. The military ordered the development of new similar systems with other artillery units. Among other things, it was again proposed to adapt marine tools for use on land. With the help of the projects that followed “Nathan”, over time, Germany was able to create a fairly numerous and developed group of railway artillery of great and special power.

All available weapons built before the end of the war were actively used in various operations. The career of these samples, including 15 cm SK Nathan, ended after the end of the battles. Subsequently, the Versailles Peace Treaty was signed, in accordance with which the German army was deprived of the right to have armaments of some classes in service and use. Under this reduction fell all railway tools that were available. By the beginning of the twenties, all 15 cm SK Nathan complexes were disposed of or handed over to third countries. The stored tools were exploited for some time by the new owners, but by the end of the twenties they were disposed of in connection with the development of the resource.