10 legendary warships that changed the concept of the Navy

February 18 2017
74
History naval technology has gone from simple rafts to the giant ships used today. The engine of this story is innovations that have changed the notion of naval navy. We talk about 10 innovative ships that influenced shipbuilding.


Kobukson, 1592 - also known as the "Turtle Ship" - can be called the first battleship ship. The vessel owes its name to its distinctive armor, resembling an armor. The roof of the ship consisted of wooden boards covered with metal spikes, which greatly hampered the boarding. Kobukson - the Korean ship, which played an important role in the victory over the Japanese fleet during the Imjina war with Japan in the 16 century. Kobuksons were not the main ships used for combat, but gave impetus to new ideas in the field of naval shipbuilding. After three centuries, during the American Civil War, a full-fledged battleship will appear - and this is a great merit of the Korean Kobukson. 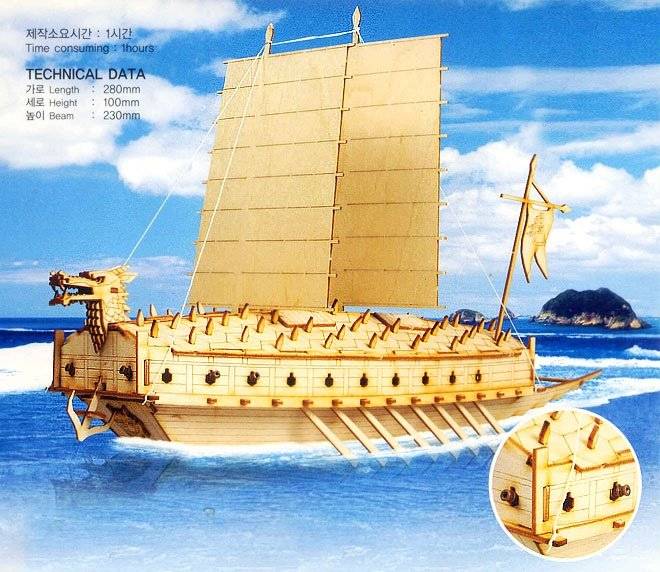 Victory, HMS Victory, 1765 - battleship of the first rank of the Royal Navy of Great Britain, one of the most famous ships that are still afloat. The ship was launched in the 1765 year and took part in many sea battles, including the famous Battle of Trafalgar. The 104 guns with which the ship was equipped made it invincible. In 1805, during Victory Battle of Trafalgar, Victory was the lead ship of the left battalion of British ships that attacked the superior French-Spanish fleet. In this decisive battle, Great Britain has not lost a single ship, and France and Spain have lost the 22 ship. On board the legendary Victory, Vice Admiral Nelson was mortally wounded. Today, Victory has been turned into a museum, being the main attraction of Portmouth. 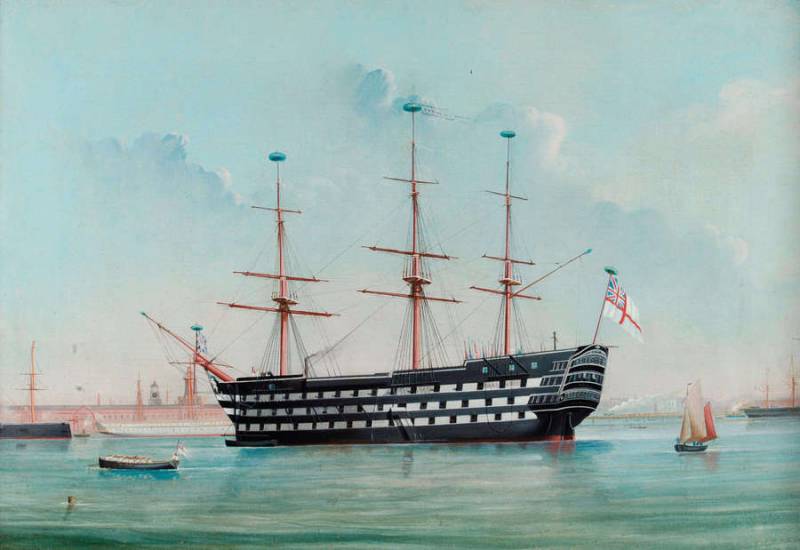 The Constitution, the USS Constitution, is the world's oldest sailing ship, afloat and still in service in the American fleet. The history of the Constitution is no less outstanding than Victory. The ship "Constitution" got the nickname "Old Iron" (Old Ironsides) due to the fact that the enemy cores bounced off its sides. "Iron-old" won the 33 battle, never having suffered defeat. The most notable was the victory in the Anglo-American war 1812 — 1814, in particular - the battle in which he defeated the British ship HMS Guerriere. 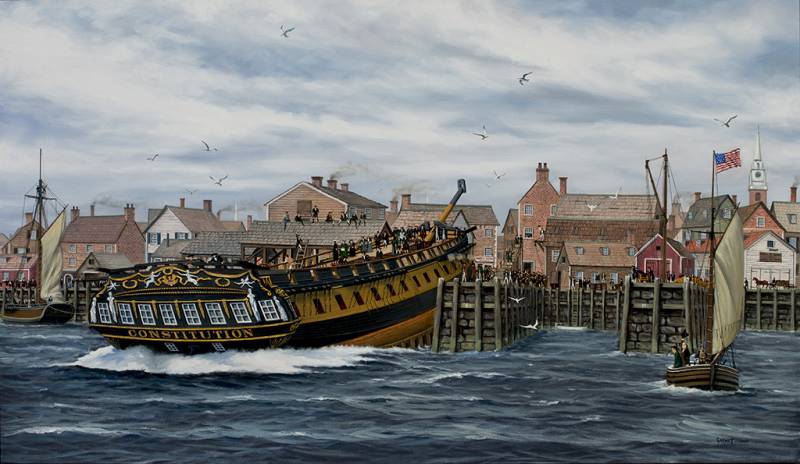 "Napoleon", Napoleon, 1852 - French screw battleship of the second rank. On board was the 90 guns, and he himself was equipped with an unprecedented technology at the time: the screw propulsion system. The use of steam traction for naval ships altered naval battles. Over the 10 years after the appearance of "Napoleon", both the French and English fleets built more 100-like vessels with mechanical engines. In fact, "Napoleon" marked the end of the era of sailing warships. Military ships began to equip the steam engine, while sacrificing a place for potential guns. Despite the fact that their firepower has decreased, the ships became faster and more maneuverable. 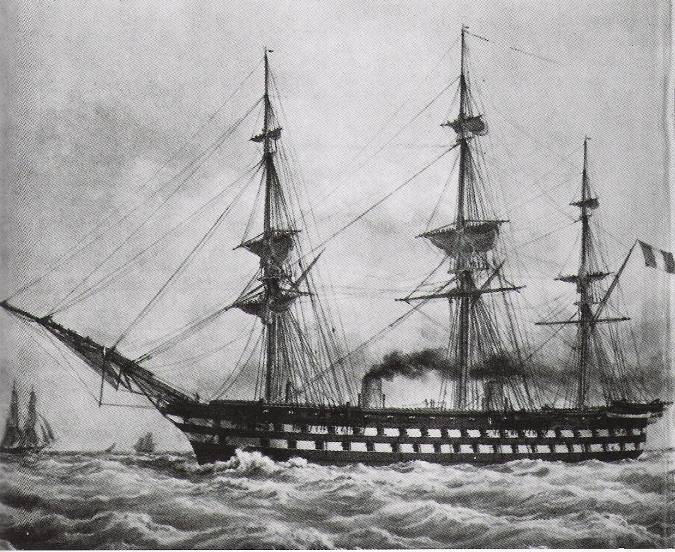 The Hanley, CSS HL Hunley, 1863 is a Confederate submarine built during the American Civil War. This is not the first submarine in the world, but one of the first to successfully prove themselves in battle. A jump in the development of the submarine fleet waited for the world in a few years, and the submarine "Hanley" was an exception for its time. The submarine was a steel "cigar" with a length of about 12 m (and 1,17 m wide). The boat was armed with a pole mine containing 41 kg of black powder attached to a wooden pole in the bow. The crew consisted of a 8-man. The first (and last) attack of the Hanley took place in 1864 year against the 12-gun crew sloop of the US Navy "Housatonic" (USS Housatonic), which carried out a naval blockade of the city in 8 km from the coast. The submarine successfully attacked the ship - it sank to the bottom for 5 minutes. The submarine signaled a return, plunged, but after that it never surfaced. Perhaps it was ruined by mechanical damage caused by the explosion. 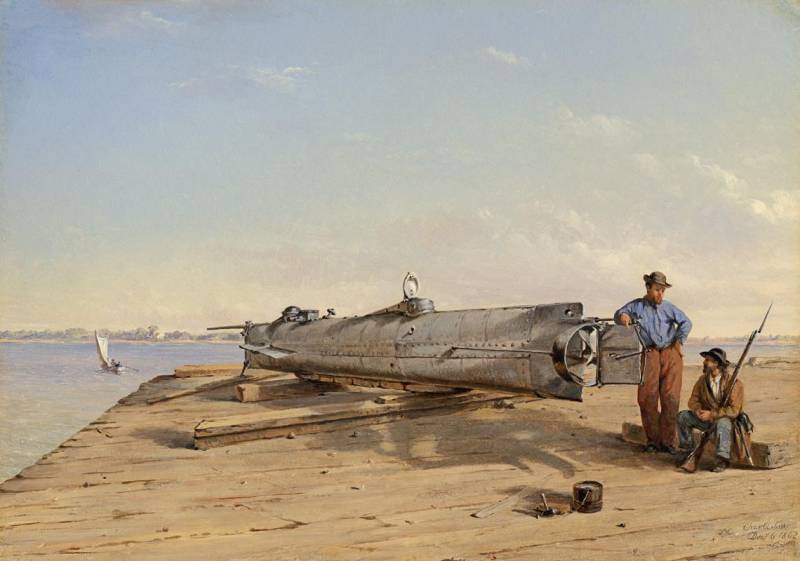 The Dreadnought, HMS Dreadnought, 1906 is the British battleship, without a doubt, a revolutionary in naval affairs, and virtually every sentence about it can be started with the word “for the first time.” Thus, the Dreadnought (from dreadnought, “fearless”) was the first ship in the world to use the all-big-gun principle, i.e. “only big cannons,” its armament consisted of ten 305-mm caliber guns. This is the first battleship with a steam-turbine power plant, thanks to which it could develop at that speed a huge 21 node (38,8 km / h) at that time. Fast and equipped with powerful weaponsThe Dreadnought was not so much fearless as awesome. After the appearance of the Dreadnought, all naval powers began to produce battleships similar to it, and they all received the nominal name Dreadnoughts, and the naval armament race of those years went down in history as Dreadnought Fever. 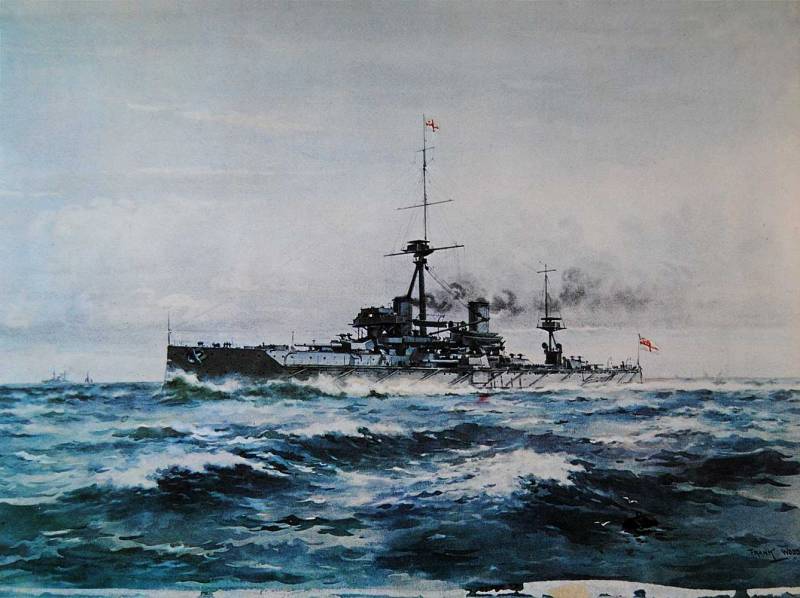 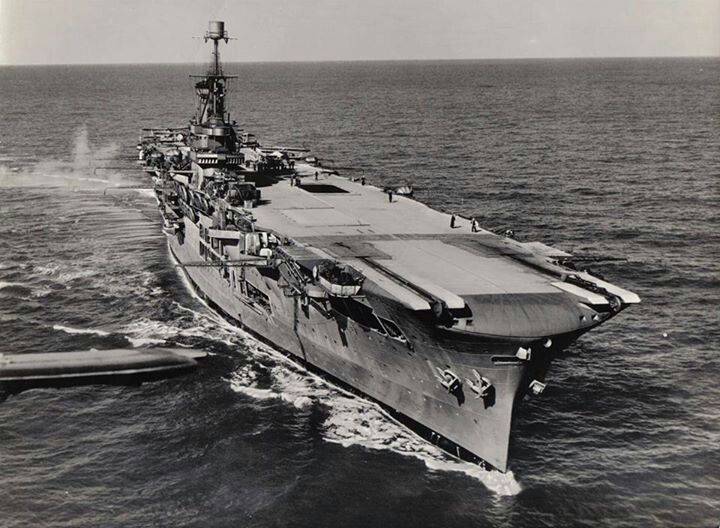 "Iowa", USS Iowa, 1942 - the lead ship of a series of 4-x battleships of the "Iowa" type of the US Navy, designed to support and protect heavy attack aircraft carriers of the "Essex" type. The battleship was armed with nine large-caliber 406-mm cannons, twenty 127-mm caliber artillery pieces and an anti-aircraft gun. "Iowa" still retains the status of the largest, fastest and most powerful battleship ever used in battle. For its naval merit ship "Iowa" received 9 combat stars during World War II and two more stars during the Korean War. The battleship was removed from the warships in the 1990 year, and in 2012 year it was turned into a museum while on the eternal port in the port of San Pedro (California). "Iowa" - the last in the history of the fleet battleship, who was in the ranks. 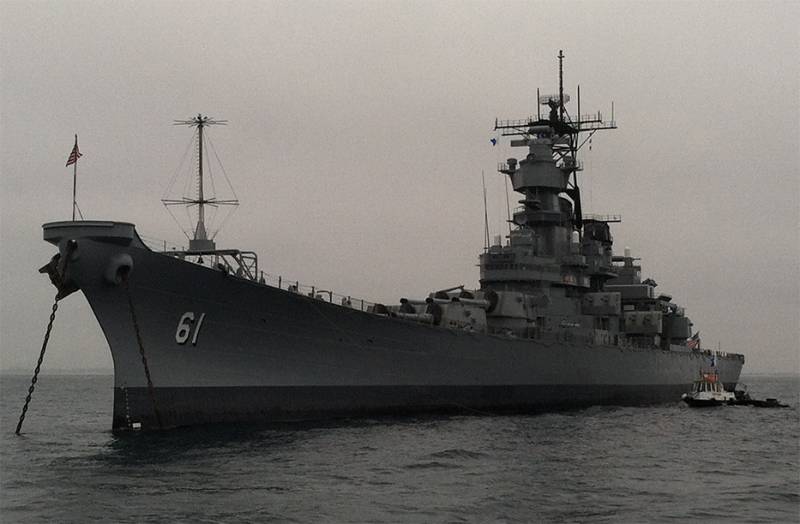 "Nautilus", USS Nautilus, 1954 - the world's first nuclear submarine, launched in the US in 1954 year. The submarine "Nautilus" never participated in hostilities, but made a revolution in naval technology. Her successful testing, in particular, the use of the atomic engine, broke numerous records. The Nautilus is the first vessel to first cross the 200 thousand miles (321 thousand km), and then all the 300 thousand miles (482 thousand km). The Nautilus submarine reached the North Pole and became the first ship to pass this point on Earth. In 1980, the Nautilus was withdrawn from the US Navy and in 1986, it opened its doors to visitors as a ship museum. 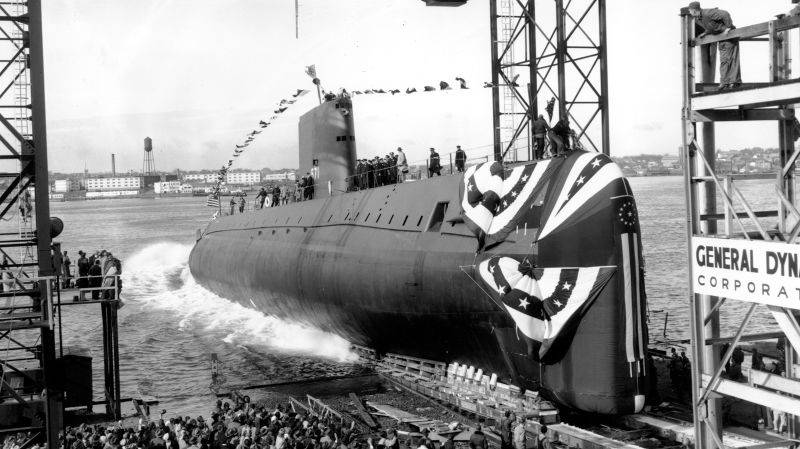 Zamvolt, USS Zumwalt, 2008 - US Navy Zamvolt missile destroyer. The Zamvolt was designed to replace the Iowa class battleships, which were withdrawn from the Navy in the 1990s. The ship has the means of stealth, equipped with Tomahawk cruise missiles and an artillery system. Artillery installations provide a range of 148 km. The vessel has an unusual shape to be hardly noticeable on enemy radars: flat oblique surfaces reflect radiation from the radar, and the Zamvolt's nose is oblique, like a breakwater. The trapezoidal shape of the destroyer is deceiving the radar, giving the impression of a much smaller vessel. The Zamvolt cost the Pentagon more than $ 3 billion. The Zamvolt type ships are operated together with the cheaper destroyers Arly Burk. And although today only two Zamvold-type destroyers have been launched, they have significantly strengthened the US naval forces. Destroyer-type destroyers of the Zamvolt type are called upon to serve as a kind of testing ground for new shipboard technologies and naval equipment, which will certainly give impetus to subsequent innovations. 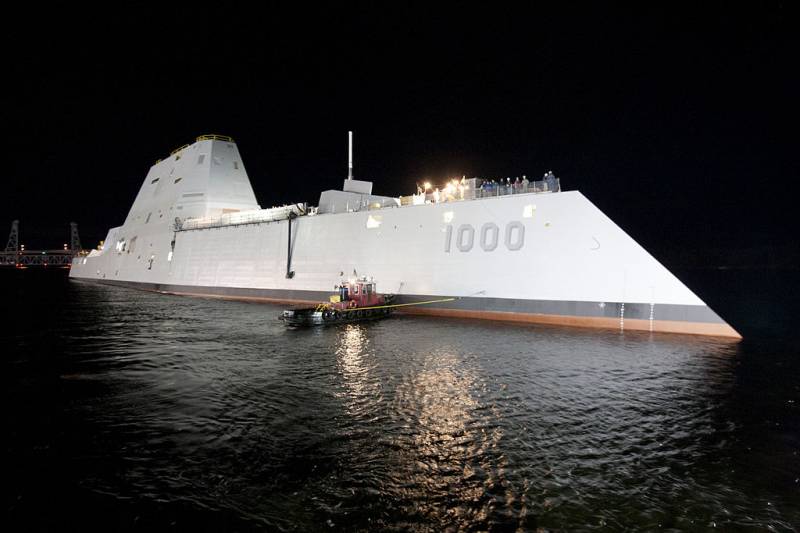