Is there a future for Russian military facilities in Belarus? 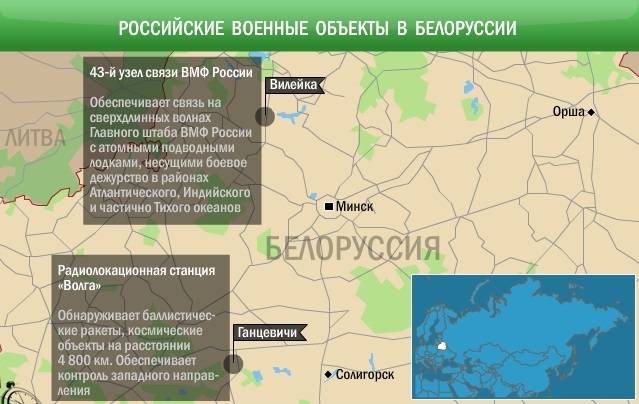 In 1995, the Russian Federation and Belarus signed an agreement according to which real estate and land for the operation of military facilities of the Volga radar and 43 communications center of the Navy Vileyka are transferred to the RF Armed Forces for 25 years without tax refunds. The lease expires in the year 2020 - just under the next presidential campaign in Belarus.

The Volga-type radar is deployed in the village of Gantsevichi in 48 km from Baranavichy. Its construction was started in 1981, then mothballed. The works on its completion and commissioning were intensified after the loss of a similar station in Latvia (n. Skrunda). In 2002, the radar was deployed on the Russian Space Forces, and in 2003, it was put on alert in the missile attack warning system. The introduction of the station made it possible to restore a single radar field in the western and north-western directions.

The object is part of the missile attack warning system (EWS) and closes on the so-called “nuclear briefcase” of the President of Russia. With the help of the Volga, ballistic missiles, space objects and airspace are monitored over the patrols of NATO submarines in the North Atlantic and the Norwegian Sea. In the sector of responsibility, it provides tracking of missile launches at a distance of 5 thousand kilometers and observation of space objects the size of a ball and a diameter of several millimeters to any of the orbits.

In addition, this radar is integrated into a unified air defense system of the Union State, is an element of the regional Belarusian-Russian grouping of troops (forces) and is part of the unified air defense system of the CIS, within the framework of which the automated exchange of information about the air situation between command posts of the Air Force and Air Defense of Russia, Belarus and Kazakhstan.

The second object is the zonal communications point of the Navy Vileyka (or the Antey radio station), located in 10 km from the district center of the Minsk region of the same name. Operated with 1964 year. Through "Antey", the exchange of coded signals of the Central communications hub of the Navy and submarines on alert in almost all oceans is carried out. The object also has a connection with the cherished button.

It is noteworthy that, on the basis of the above-mentioned agreement, both stations do not have the status of military bases. But, given the fact that the Volga radar is part of the strategic nuclear deterrent forces of Russia and it is possible to transmit commands from the suitcase through both stations, the importance of these objects is difficult to overestimate. Therefore, it is logical to assume that the issue of extending the lease is already being worked out.
Expect that Minsk will extend the bilateral agreement on the same terms, i.e. free of charge, not necessary. This is due to the difficult economic situation, and the heightened differences, both on internal and external issues within the framework of joint integration projects of the Union State, the EAEU and the CSTO.

In fact, there are not so many options for the development of events. Perhaps Minsk will follow the example of Kazakhstan and set a rental price. Especially since this practice is widely used throughout the world. For example, Poland earned 2016 million dollars only for using landfills during NATO exercises in 14.

However, one should not exclude that the Kremlin can offer Minsk to continue the tradition of military-barter relations with the CSTO member states and in return for paying the rent will supply samples of military equipment and weapons. Against this background, it will be appropriate to recall the fact that Belarusians many times asked our leadership for the supply of modern weapons, both on preferential terms and in leasing. Moreover, now the leadership of the Belarusian defense ministry is announcing plans to acquire the BTR-82A armored personnel carriers, Su-30CM aircrafts and the Nona-M1 mortar complexes from Russia.

2020 will be a difficult year for the leadership of the Armed Forces of the Russian Federation, since in addition to military facilities in Belarus, the lease term of the 102-th Russian military base in Gyumri is also expiring.

However, it is important to remember that the security issues of the country should be viewed not only through the economic lens and the existing differences - the presence of allies and their support cost much more.