Tu-154: a terrorist attack by mistake 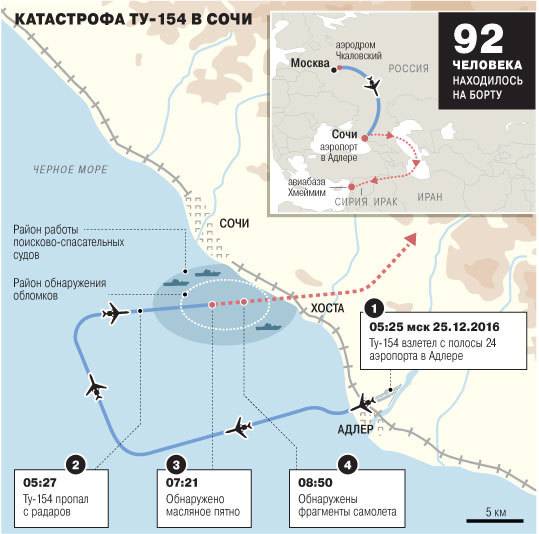 The main parametric recorder, which records the work of the engine and the on-board systems of the aircraft, turned out, as reported by the Military Industrial Courier, “not disclosed.” Whether it was possible to decipher something in it is not known.

According to the MIC information received from a high-ranking source, the black box was, as they say, a thing in itself. For some reason, just before the tragic flight, it was shot to replace one of the blocks. Instead of the supposedly outdated "stuffing" put modern. Perhaps the unit was indeed modernized, but before the flight its work was not checked as it should. As a result, all coded information remains a secret with seven seals. Accident?

Let's try to figure out how true the guesses and assumptions voiced earlier in some media.

The first. Various experts put forward a version of the error of piloting. Allegedly, the commander of the vessel, turning the plane away from some object, began to carry out manipulations that are used only in emergency cases (he pressed the rudder pedals). Now experts have come to an unequivocal conclusion: there was no pilot error. Although the possibility of the appearance of a drone at the rate of the aircraft does not dismiss.

The second. The equipment worked until the last moment in the normal mode, its failure was not fixed.

According to one of the former military aviation experts, who have been involved in the investigation of flight emergencies for a long time, have not yet found about 20 bodies of the victims. This, like the large fragmentation of Tu-154 units, suggests that there was still a terrorist attack on board.

“Only an unusual act of terrorism, one that our specialists encountered for the first time,” said the first deputy chief of the operational department of the Air Force General Staff (1997 – 2003), leading adviser to the Federation Council Committee on Defense and Security (2003 – 2013), Major General retired military pilot Igor Semenchenko.

But if this is a terrorist attack, it has been worked out for a long time and thoroughly. Forces and funds for his performance were thrown colossal. Russia wanted to show that it is better to stop its activity in Syria. This version is confirmed by the well-known Italian political scientist Giuletto Chiesa: there is nothing accidental, including the crash of the Tu-154 aircraft, the relationship with other events will be found.

One of the threads stretches to Adler Airport, from where it started on the last flight of the Tu-154. According to some reports, only for 20 days, from 3 to 23 in January, the air harbor allowed 163 to grossly violate the order of the Ministry of Transport. The procedure in the sensitive territory was noticed after the identification of the case of the passage of a truck through a checkpoint without examination. Later it turned out that such a violation is not the exception, but rather the rule. However, according to a representative of the airport administration, there were no official appeals from law enforcement officers regarding the incident. This information is currently being verified.

Since one of the reasons for what happened may be in the work of terrestrial services, which should record everything that happens around the airport at a great distance, you should at least learn from this.

It would be advisable the basic parameters of the aircraft systems: speed, course, altitude, roll, pitch, cabin pressure, other characteristics - transmit in the form of telemetry and record in real time by means of control of the airport of departure and / or onboard registration. Implement it on domestic aircraft is a snap. With foreign sides it is more difficult, but manufacturers can be convinced of this - for them the safety of passengers is a priority.

Multichannel control systems, including in the optical and IR ranges, should accompany all flights. Then you don’t have to search and confiscate DVRs and cameras from uncomplicated individuals. Accordingly, control is required at airports and parks with high-definition TV cameras with recording and long-term storage of information. All this in a complex will give the corresponding result.