Oh, there is no "weapon" stronger than ... Japanese advertising!

February 21 2017
41
After introducing the VO readers with Japanese culture and Japanese beliefs, many readers wanted to continue this topic. And indeed, the theme of Japanese culture is truly inexhaustible. And every time surprises us with new facets. There, for example, you can meet (not in plain sight and not on the main street) but you can, vending machines for worn women's panties. Many schoolgirls and students earn this and not bad! In the morning they go to schools or colleges, go to special shops and ... change old clothes for fresh ones. And the owner of the old packs, indicates the period of wearing and in the machine! Someone comes and buys! Like this. But Japan ... Well, and about this truly amazing phenomenon, which is Japanese advertising, we will tell you now, too ...
V. Shpakovsky 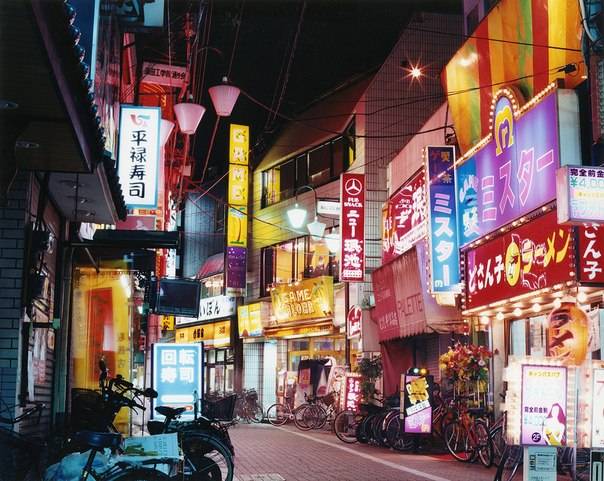 Tokyo Street at night ... And not the most important !!!

Japan is an amazing country, the undisputed authority of which is recognized throughout the world. Japanese cars and Japanese video equipment - the dream of all connoisseurs-consumers. And how much enjoyment comes from the contemplation of Japanese rock gardens, which are a UNESCO World Heritage Site; Japanese ikebana - truly the card of the miraculous art; Japanese amazing chrysanthemums, sakura and irises! We should not forget about the extraordinary Japanese silk paintings: exquisite, luxurious and at the same time delicate. 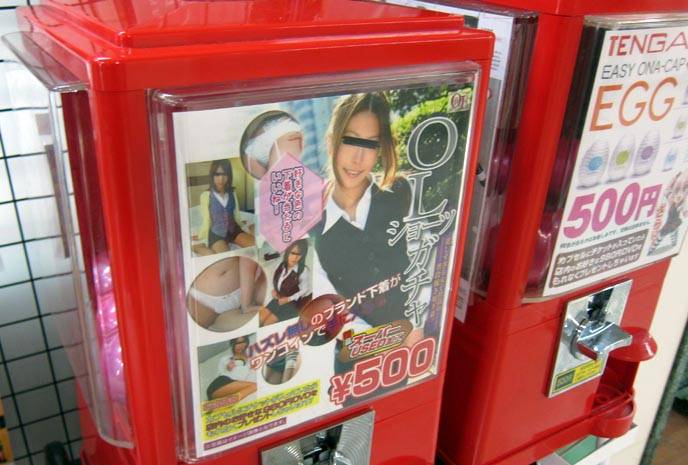 If the product says “made in Japan”, then this definitely means (translated into evaluation points): “excellent”, “excellent”, which is why Japan holds the leading positions in many indicators. 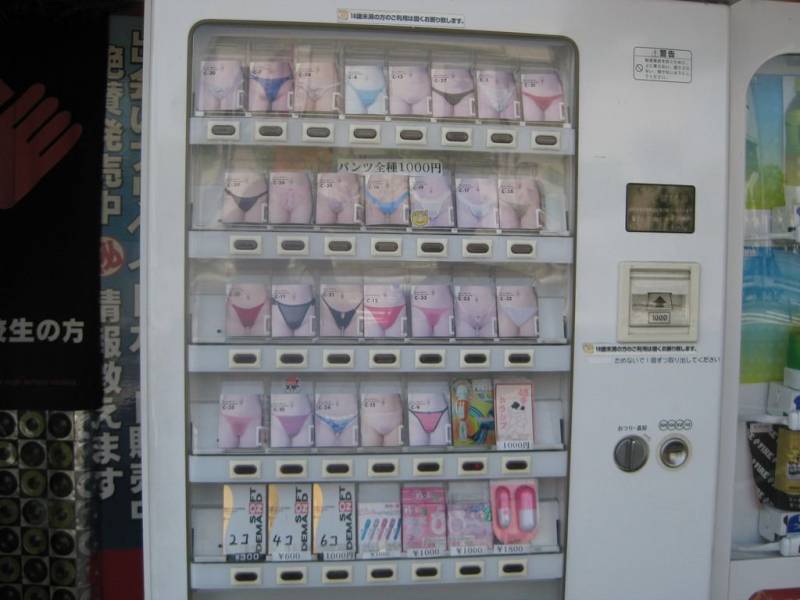 One more. In it, the choice is richer!

But, oddly enough, it was not always. Total 70 years ago, in the 1950 year, this country was at the same stage of development as in the standard of living and production of semi-colonial Egypt. It is hard to believe, but at that time “made in Japan” meant: “this is terrible,” because the quality of everything that was produced in Japan left, to put it mildly, much to be desired, which was the subject of ridicule, constantly heard from TV screens and US cinemas. 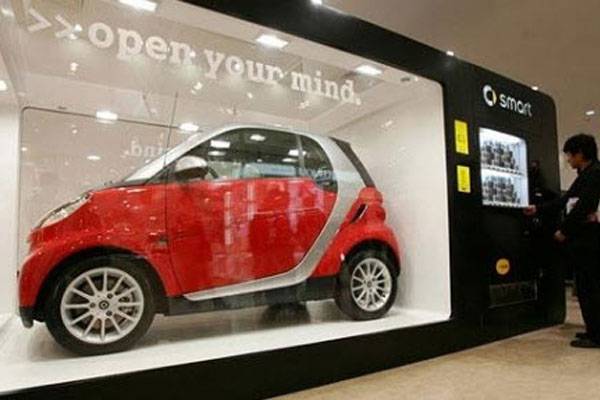 However, in the machine in Japan, you can even buy a car and ... live snails. Alive!

Japan in American comedies was represented by that “stupid country”, where it does not shoot ... a pistol, where a car does not start, where something does not work forever or fails very soon ... 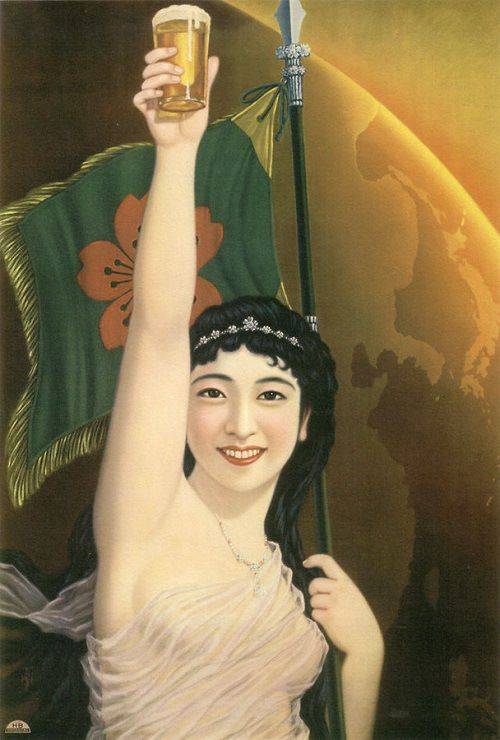 Vintage Japanese beer ads. Americans at that time never dreamed of it !!!

But already in 1975 year (a quarter of a century has passed - not a very long period within stories) in the US, no one else laughed at the Japanese and Japan. Moreover, in 1985, in the film “Back to the Future”, in the dialogue of the main characters, Marty McFly and Dr. Brown, the phrase “All the best is done in Japan” sounded. 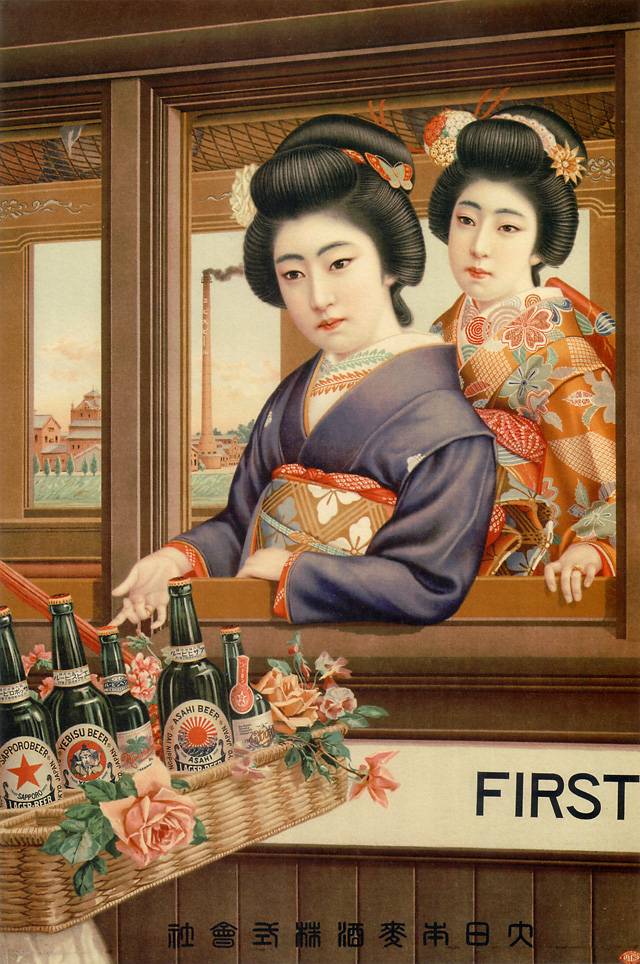 Japan won a similar authority not only because of Japanese national pride, not only because of their composure, perseverance and hard work. The breakthrough also occurred because the Japanese, turning to their traditions, created a modern and highly effective advertising. 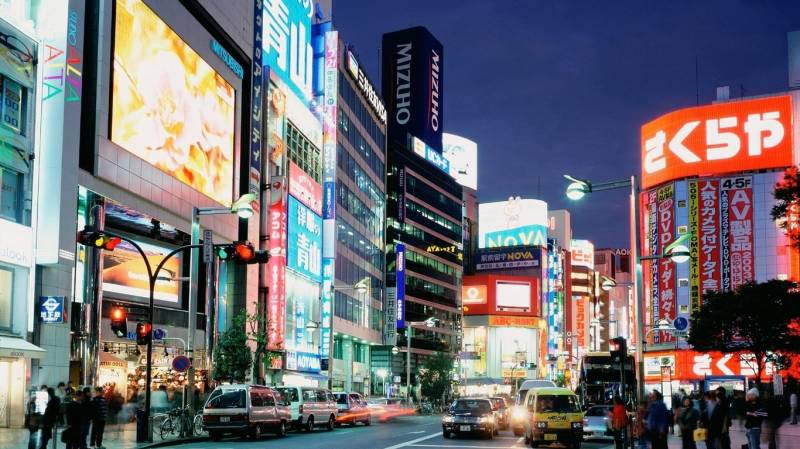 Another Tokyo street at night.

As is known, Japanese traditional culture is based on calligraphic art, ikebana art and the sacrament of the tea ceremony, and the basis of Japanese spirituality and morality is “Shinto” (meaning “The Gods Path”). Shinto is not a religion (the Japanese profess two religions - Shinto and Buddhism - which, without disputing each other, peacefully coexist), but a kind of philosophy of being, which, however, defines the essence of the Japanese way of life, its thinking and the rules of its behavior. Doesn’t it, philosophically sound the thought recorded in the Shinto commandments: “Act according to the laws of nature, sparing the laws of the society”? 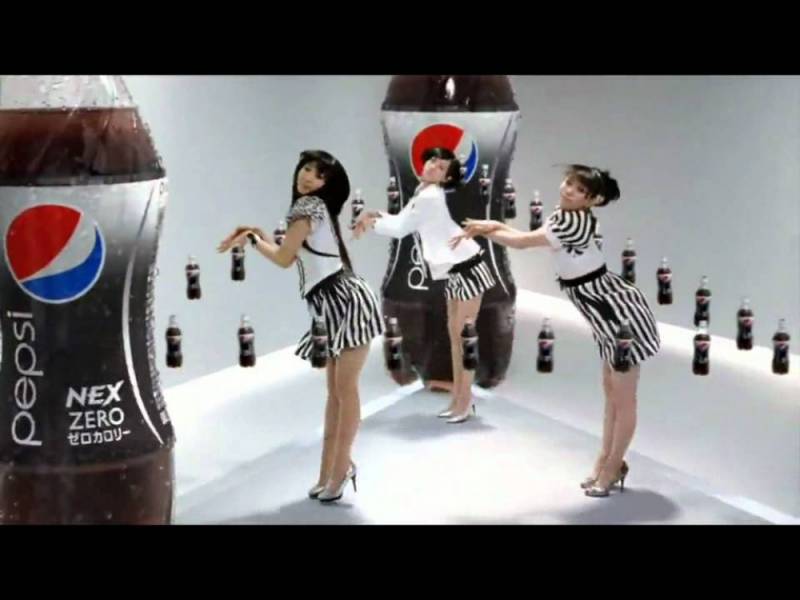 That is, Nature, beauty and the naturalness of everything that surrounds a person, understanding that there is nothing superfluous or insignificant in nature is put at the forefront in Shinto, and this allows the Japanese to see even the smallest unprecedented beauty ...

It is this understanding of beauty that allows the Japanese to create it, while introducing into it something completely different, new, modern, but, of course, relying on all the same beauty.

An example is Japanese advertising.
Onomatopoietic words of the Japanese language that reproduce the sounds of nature (the voices of birds and animals, the splashing of the surf, the frenzy of thunderstorms, the rustling of foliage, the hum of the wind in the forest, the crunch of snow, the crackling of the fire, the noise of urban transport and actions performed). 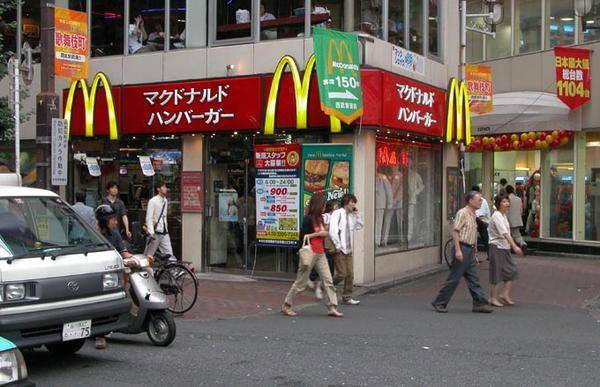 Japanese "McDlonalds". Only Chinese is funnier ...

An element of advertising invented by the Japanese as “shizuru,” a visual and audible image, awakens physiological needs in the consumer, i.e. The viewer who watches the ad not only watches, for example, a steak is fried, but also hears the sound that comes from frying it (“ju-ju”), which leads the viewer to want to buy and eat this steak.

The advertising of thirst quenching person’s thirst is accompanied by the sounds of “goku-goku”; droplets of moisture flow into a glass of beer to the sounds of "fuwa-fuva"; Eating traditional rice ramen noodles takes place to the sound of “dzuru-dzuru”; cooking on live fire - to the sound of "gutsu-gutsu"; biting off something juicy - to the sounds of "hrum-m." But a person nibbles, for example, a slice of pizza, takes place in a visual (rather than sound) image, when you can see how thin strings of melted cheese are pulled to his lips ... Appetizing, isn't it? ..

Along with the visual and auditory images, Japanese advertising attaches great importance to color, because the color for the Japanese is a way of expressing the soul. Moreover, Japanese buyers believe that the essence of a product is love, and buying a product (that is, knowing its essence) is the same as falling in love! .. 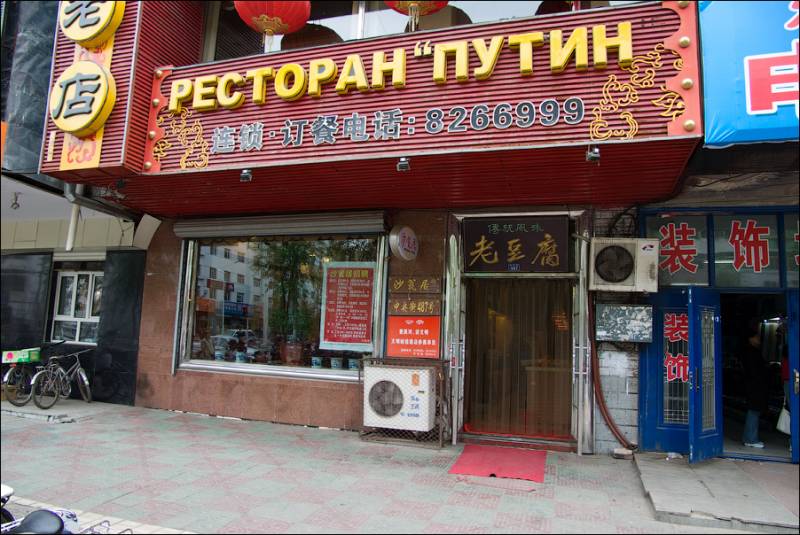 The Japanese know that money needs to be done on everything!

In Japan, the red color was always banned in advertising of alcoholic beverages, but with the introduction of it on the label of Asahi beer, the company's sales level jumped sharply (the company, of course, drew attention to the red emblem of the Coca-Cola brand and did the right thing ...).

But with regard to some flowers in Japan there is still a “taboo”. So, for example, the Japanese never use shades of dark green in the color scheme of their packages (according to statistics, 27% of the population causes this color, excuse me, nausea), and in floor coverings it is pink (research showed that as if pink floors sag ...). 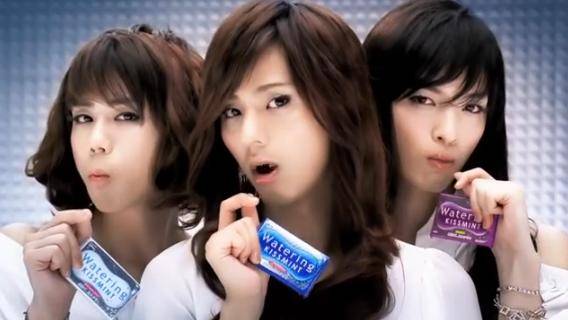 Everyone understands what they advertise? And the text is not needed, is not it?

According to the Japanese, the main thing in color is its “natural beauty”. They even believe that each element of nature has its own color. So, blue (“trees turning blue in the morning mist” is green) the color corresponds to their tree; red to fire; yellow (brown) - to the ground; white to metal; black - water.

These five colors (including their shades), according to the Japanese, express the whole nature, which the Siseido company very competently used in its new brand of Sinoado cosmetics, which suddenly became very popular with 2002. 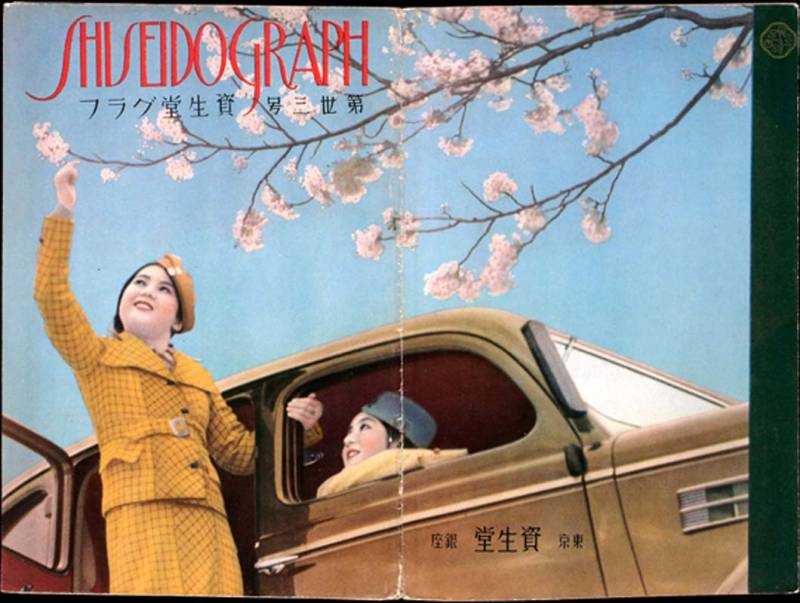 Early advertising "Sisaydo". Who will tell you that "Shisheido" spit in his eyes! He is an ignoramus!

Siseido specialists understand blue (green) color as reason and wisdom; red as happiness, fate and life; yellow as worship; white as cleansing, peace and eternity; black as chaos, omnipotence, but also admiration. This color palette, in their opinion, allows us to know the harmony of nature. They are confident that the consumer will be able to know it in this way. Based on this, experts and promote their product (I must say that it is very successful).

Along with the main colors, they also widely use golden and silver colors, which can be seen on the elegant black and gold packages of this company.

Advertising specialists from Siseido, who work for export, and the fact that each country cooperating with it has its favorite colors, are not missing out. And, if, for example, marble-blue and marble-white shades are popular in China, then the packaging of cosmetic products of the company is represented by this color series. 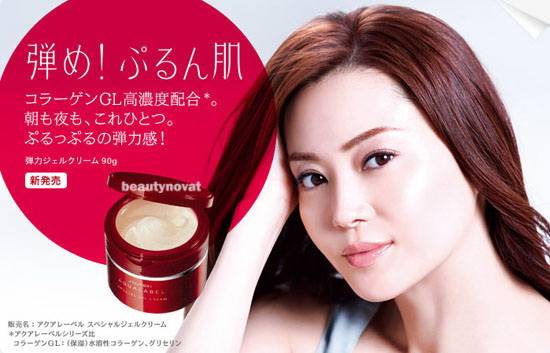 This is a national motive in advertising "Sisaydo".

Everyone knows that Japan is a territorially poor country, as a result of which the Japanese are forced to “enter” outdoor advertising into the landscape of the city, making it their style of life: advertising adorns the gray streets of cities, creating a kind of comfort in the rapid pace of life of the Japanese.

Advertising is present in the shop windows, on the buildings of institutions, you can see it on transport.

A special place is occupied by a unique advertising "subway". At stations and junctions, static and audio forms of it are presented, and on the walls of tunnels huge advertising posters are a storyboard that is viewed from the car window of a moving train, like a video. This is the so-called "tunnel advertising".

This is an international motive in advertising "Siseido". Does your wife use Siseido? - and asks this look.

All types of advertising in Japan work very effectively and purposefully, “not letting” potential consumers of the goods they promote from their sight. 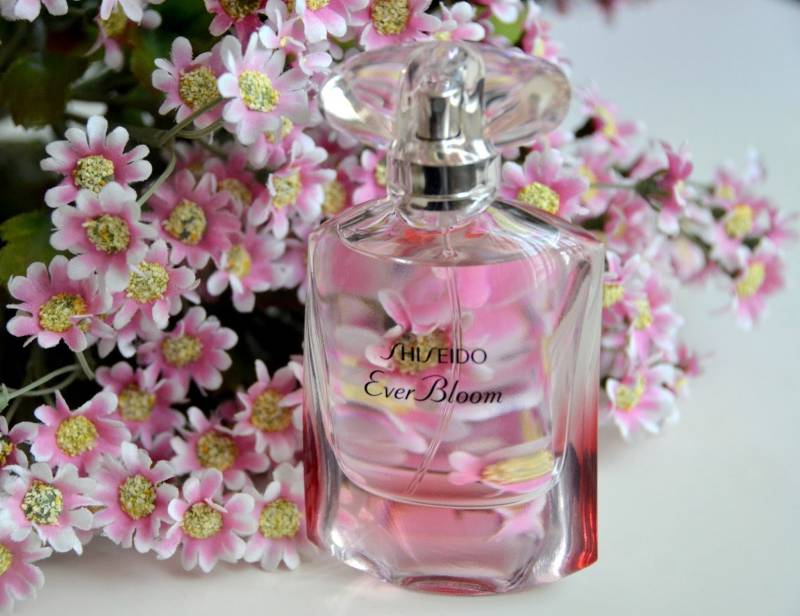 Well, where without sakura?

If people are the engine of historical progress, then advertising is the engine of commerce. Trade is an important source of income in the economic section of any country's budget. Its role is very important, and Japanese advertising specialists, understanding this, make it visible, “tasty”, effective. 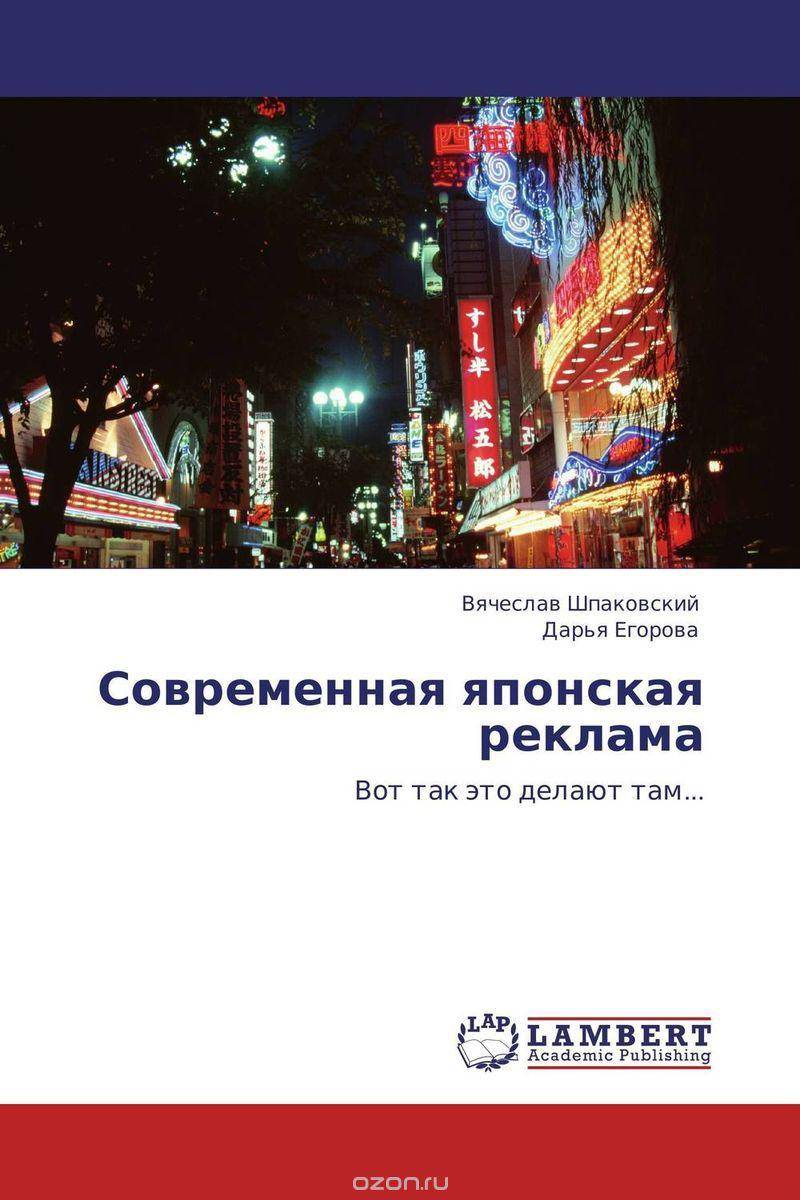 And this is our Russian book about Japanese advertising, but unfortunately it was published in Germany ...

And yet, advertising is advertising, even if it is excellent, but the main thing in selling a product is its quality (there is nothing wrong with this in Japan). After all, consumer interest and purchasing power of the population depend on the quality of products. 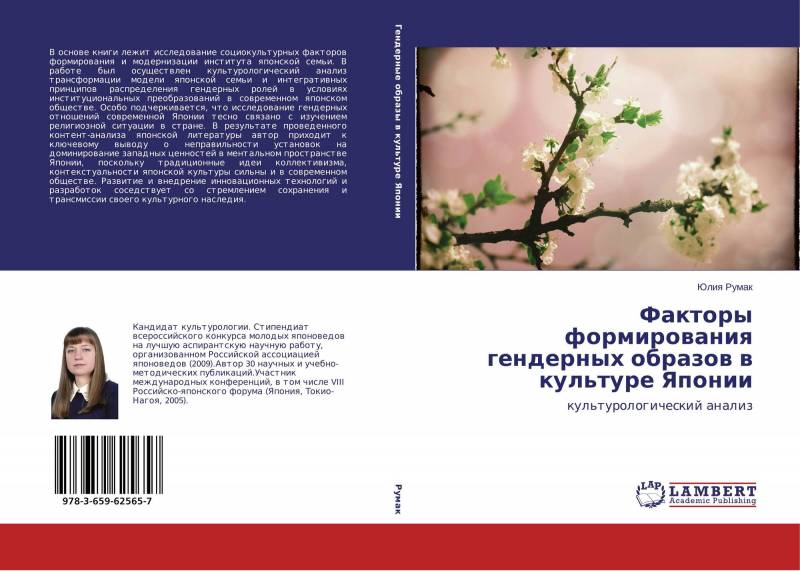 By the way, the mentality of the Russians and the Japanese are in many ways similar. The Japanese also like Cheburashka, but the Americans do not understand his charms!