February 16 2017
9
210 years ago, 16 February 1807, the battle of Ostrolenka, in which the Russian corps under the command of General I. Essen and the French Corps Savary participated. Our troops attacked first, but due to problems with the interaction, the offensive ended in defeat.

After a fierce battle at Preussisch-Eylau, which both the Russians and the French declared their victory, both armies withdrew to their strongholds in order to restore and replenish their forces. The Russian army first retreated to Konigsberg. The place was convenient for the military camp, the Prussian authorities tried to supply our troops with everything they needed. When the French withdrew at Passarga in early February, the army of Bennigsen went over to Landsberg. Our troops are located in the district of Bartenstein (there was the headquarters of the army) - Heilsberg. The avant-garde was located in Launau, on the extreme right flank, against Braunsberg, stood the Prussian corps of Lestocq.

The French army retreated across the Passargu River. On the left wing, in the region of Braunsberg, was the Bernadotte Corps; in the center, at Liebstatt - Soult, on the right wing, at Hohenstein - Davou. In Osterode, where Napoleon placed his stake, there was a guard. Ney's troops remained on the right bank of the Passargi, near Gutstat. The combined corps of the Poles and the French, under the command of General Zayoncek, stood to the right of Davout, near Villenberg, linking the main forces of the army with the separate Savary corps near Ostrolenka. Thorn became the main base of the French army. It housed the main reserves, parks and hospitals of the French army.

Napoleon still wanted to make peace and an alliance with Russia, so he offered Russian commander Bennigsen a truce. However, Bennigsen did not accept it. He told the French envoy, General Bertrand, that he refuses to start negotiations, since he was "set by the sovereign to wage war". Tsar Alexander agreed with the statement of Bennigsen, and the opportunity to end the war, which was fought in the interests of Prussia, Austria and England, was missed. Napoleon also offered to make peace to the Prussian king, but he refused, hoping for help from Russia and England.

Meanwhile, the Russian emperor Alexander urged the British to help Prussia, especially financially, and also support the anti-French movement in Europe. He again urged the Viennese court to oppose France, citing Prussia as an example, which was neutral in 1805 and because of this was crushed and almost completely occupied. He offered the Austrians to immediately strike the rear of the French in order to save Europe from Napoleon. However, the Austrians were not in a hurry to start a war with Napoleon. They were waiting for a better moment.

Alexander firmly stood on the continuation of the war and strained all the forces of Russia to strengthen the army of Bennigsen. From St. Petersburg, the 1 Division, consisting of Guards units, was advanced to his aid. The troops from the reserve were allocated to the army of Bennigsen, rifle battalions were sent to replenish, the 17 and 18 divisions were sent from Moscow and Kaluga. Alexander wanted to succeed in the battle, which was to cause active operations of England and Austria against France. However, this war was beneficial to the Austrians and the British. The Russians and the French, who had no fundamental contradictions, fought with each other so that it was in the interests of London and Vienna.

The main forces of the two great armies were inactive from February to May 1807. This was caused by heavy winter battles, after the Russian army took an unexpected initiative in winter and began an offensive movement. A series of stubborn battles between the avant-gardes and the rearguards of the Russians and the French ended in a bloody battle at Preussisch-Eylau, where both sides suffered heavy losses. At the same time, both sides suffered no less losses due to forced marches at an unfavorable time of year (blizzards, snowfalls, mudslides), which led to a large number of sick and frostbite. The troops were drained of blood and tired, it was necessary to give them rest and put in order, to wait for reinforcements. Napoleon was waiting for the fall of Danzig, where there were warehouses with large stocks of food and military equipment, and the Prussian fortress itself was of great strategic importance. The French emperor replenished and strengthened the army, preparing for a decisive battle. New soldiers, new artillery, ammunition were distributed to the corps to them personally. Napoleon was already actually the master of Europe, the Great Army was replenished with various kinds of Germans, Italians, Dutch.

The small war continued only on the Russian left flank. Napoleon instructed Zayonchek with demonstrative actions to threaten to interrupt communication with the main forces of Bennigsen and the corps of Essen. Platov with the Pavlograd hussars and ten Cossack regiments acted here. Cossacks in the daily search captured hundreds of prisoners. Worrying the day and night of the enemy, the Cossacks were so fed up with Napoleon that in one of his regular bulletins he called them “the disgrace of the human race”. The French command reinforced the corps of Zayonchek with cavalry. In response, Bennigsen strengthened Platov's detachment with several more regiments. It was one of the first successful examples of the irregular war of the Russians against the French, which during the Russian 1812 campaign would take on a massive scale. 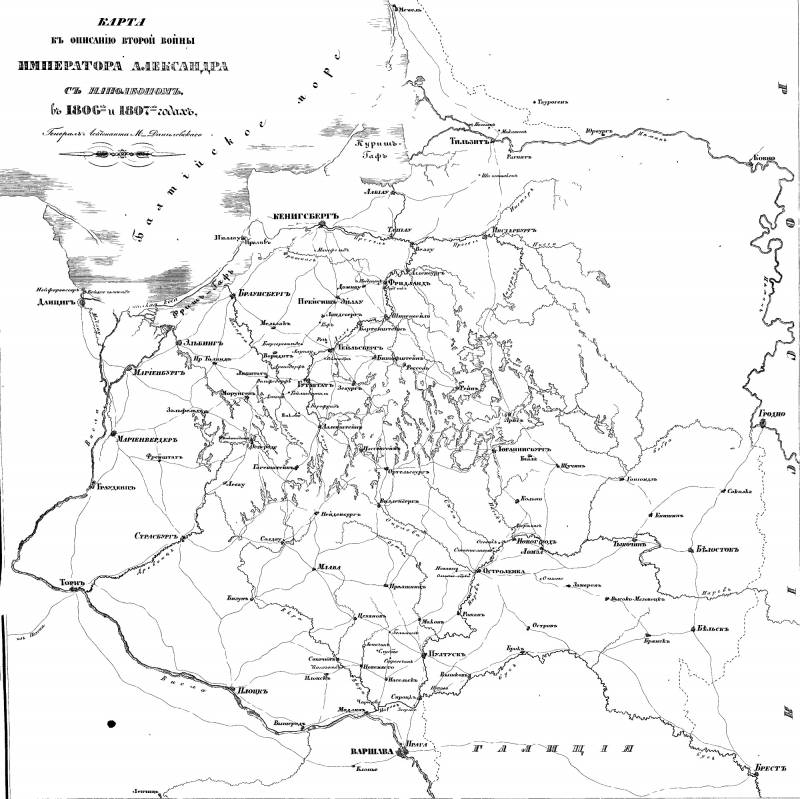 At the beginning of January, 1807, a corps under the command of I. Essen, marched from Brest to Bryansk. Major General Leviz commanded the Russian avant-garde. Russian patrols reached the shores of the Bug and Narew, disturbing French posts and foragers. Lann's corps stood against our troops, but it was replaced by General Savary due to illness. The left wing of the French corps was occupied by Ostrolenka, the right wing was Brock, on the Bug. Napoleon ordered René Savary to conduct defensive actions, guard the right wing of the main forces, prevent the connection of Essen's corps with the army of Bennigsen and cover Warsaw if the Russians try to attack it.

Seeing that the enemy was inactive, Essen in mid-January 1807 pushed the corps from Bryansk to Vysoko-Mazovian. Upon learning that the French squad had occupied the Island, Ivan Essen decided to attack the enemy. 22 January, our troops attacked the enemy. Major General Urusov delivered a frontal strike, and Léviz began to rim the city. The French courageously withstood the attack from the front, but finding that they were bypassed, they began to retreat.

After the Battle of Preussisch-Eylau, Bennigsen ordered Essen to attack the enemy in order to divert the main forces of Napoleon from the rear. Savary found out about this by intercepting the messenger with Essen’s report to Bennigsen. Thus, the French knew about the Russian offensive and prepared for it. Essen decided to attack on both sides of the Narew. The main forces of the corps were to go from Vysoko-Mazowiecka directly to Ostrolenka. The detachment of Prince Dmitry Volkonsky was supposed to go along the right bank of the Narew, through Kolno. Volkonsky's squadron initially included the 6-division of Sedmoratsky, and three regiments of the 9-division. However, when the offensive operation began, the 6-division received an order from Bennigsen to join the main forces of the army, to Koenigsberg and march there. Volkonsky asked to wait, first to attack Otsrolenka together, and only then execute the order of the commander-in-chief. But the 6-I division went to join the army. As a result, the Volkonsky detachment could not deliver a strong blow to the enemy. Volkonsky left only the Ukrainian, Crimean, 10 th Egersky and Cossack Ilovaisky regiments, three squadrons of the Mitavy dragoon regiment.

3 (15) February 1807 of the year Volkonsky detachment knocked down a weak French avant-garde near Stanislavov. On the same day, the enemy should have attacked Essen, but he was late, which was commonplace on bad roads. Having received the news of the Russian attack, Savary left one division in Ostrolenka, and on the other he went to Stanislavov, where he joined the vanguard. Prince Volkonsky did not take the battle with the superior forces of the enemy and retreated over the river Skhvu, where he took up defense. The night stopped the skirmish.

4 (16) February Savary troops began bypassing the flanks of the Volkonsky detachment. Russian troops desperately fought back, went to bayonet attacks. In fierce battles, the head of the Ukrainian regiment Budberg was seriously wounded, and the commander of 10 huger was killed - Brezgun. However, the French bypassed the Russian flanks and Volkonsky withdrew the troops to a new position, at Osovka. At the new position began a new battle. The French again went around. After a stubborn battle, our troops retreated to a new position, but even here they were forced to concede to the superior forces of the enemy. Volkonsky detachment took another position in the forest. Savary was preparing for a new attack when he received news of the approach of the Russian troops to Ostrolenka. Taking with him most of the squad, Savary hurried to Ostrolenka. The remaining troops, led by General Gazan, he ordered to restrain Volkonsky.

Approaching Ostrolenka, Essen learned about the state of affairs from Volkonsky and ordered him to retreat, trying to alleviate the situation, he began demonstrative attacks by the enemy. Our troops attacked the city of Ostroleka in three columns and broke into it several times, meeting with the stubborn resistance of the enemy. Then Essen led the troops to Vysoko Mazowieck. Savary pursued Russian troops and repulsed two guns. 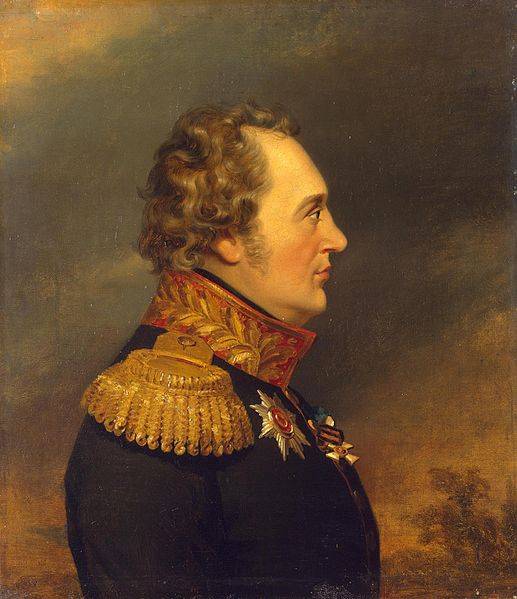 Essen justified himself before Bennigsen by taking the 6 division from the Volkonsky detachment, and he was threatened with destruction. Both sides lost in this battle on the 1200-1500 people.

Returning after a failed operation, Essen is still located in High-Mazowiecke. Russian forward detachments continued to alarm the enemy between the Bug and the Narew. Thus, the detachment of Major-General Lvov beat off the 2600 of Russian and Prussian prisoners. Soon, Napoleon handed Savaria’s corps to Marshal Massena, who had arrived from Italy, and took him to the area of ​​Pultusk. The Russian avant-garde under the command of Wittgenstein was alarmed by the front lines of Massena. However, the French marshal, fulfilling the order of the emperor to act on defense, did not leave Pultusk, only he strengthened the vanguards.

Essen was inactive, like Massena. Russian troops experienced big supply problems. The surrounding area was ravaged by war, epidemics raged in the villages, the population fled to Galicia. The troops suffered from hunger and disease. Essen believed that serious operations were impossible before spring and suggested that Tsar Alexander take the artillery and part of the troops to the border in order to improve supply. Alexander forbade the withdrawal of troops. In February and March, the corps of Essen stood still; in April, Essen was replaced by Tuchkov. 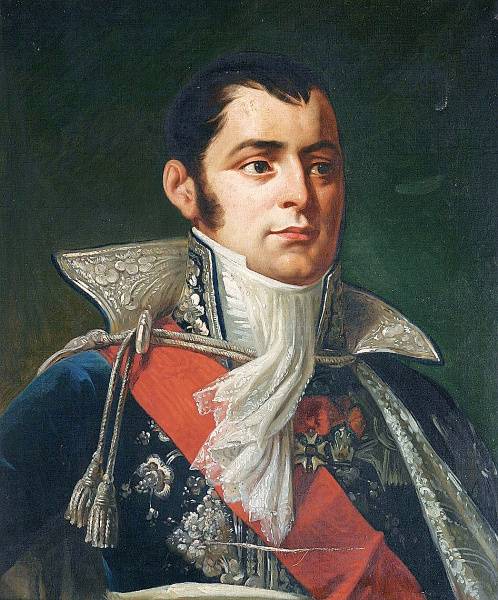 Russian-Prussian-French War 1806 – 1807.
As a military psychosis led Prussia to a military-political catastrophe
How Napoleon destroyed the Prussian army
Campaign in Poland. How Napoleon tried to crush the Russian army
Battles at Sokhochin-Kolosomb and Charnovo
The victory of the Russian army in Pultusk
Battle of Golymin
Start of the 1807 campaign of the year. Battle of Morungen
Battle of Bergfried
Rearguard battles of the Russian army. The Battle of Goth
The decisive battle of Preussisch-Eylau
“What courage!” As Napoleon’s army nearly defeated at Preussish-Eylau