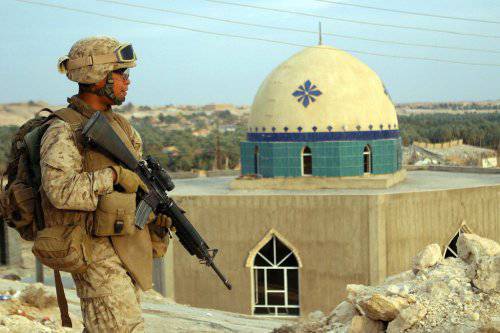 Americans almost fulfilled their mission in Iraq. They destroyed a powerful centralized state in the Middle East. Captured the oil fields of Iraq. The next thing they need to do is to break up the state into small parts. Therefore, they are withdrawing their contingent from the country by the year 2011. After the withdrawal of troops, the country will fall into a state of chaos and civil war. The Kurds will come out first, and after this the territory will continue to be divided and split up into smaller parts. That's when the mission will be fully completed. Not the mission that was declared, but the one that was actually planned.

After the withdrawal of American troops in Iraq, relations with neighboring nations and states will become more complicated. War will break out between Sunnis and Shiites. On the one hand, Iran will be drawn into this, to some extent Yemen, on the other, Saudi Arabia and so on. The entire Middle East will be in a state of instability. But both the USA and Israel are very profitable. The oil fields of Mosul, Kirkuk and southern Iraq will be completely under the control of American and British companies. And while the flow of oil does not stop, the local population can peel each other as they wish. And the liberated troops of the Americans will be transferred to Afghan territory in order to press Iran against Afghanistan.

An independent Kurdish state will appear on the territory of Iraq, which will have an active destabilizing effect on the situation in the region. In fact, now Kurdistan has the rights of extensive autonomy within Iraq, so the matter is small. They will simply declare themselves an independent state, after which the Kurdish problem will sharply escalate in Iran, Syria, and especially in Turkey. And this is also in the interests of the United States and Israel. The goal will be achieved.

Despite the general instability in the region, with the oil field everything will be just stable, because both the Shiites, the Sunnis, and the Kurds will be interested in survival. And they will be able to survive only through the supply of oil. So far, the Americans have practically mothballed Iraqi oil. She left as a strong reserve. But later, oil will begin to pump, and Anglo-American companies will pump it, giving the local population pieces of dollars in return. Even without buying oil from them, but simply by peeling off the penny, or more precisely the cent percentages for which the Iraqis will buy weaponWell, and food. All counted. Mission Possible.