Russian and US fleets: destruction statistics. Part of 2 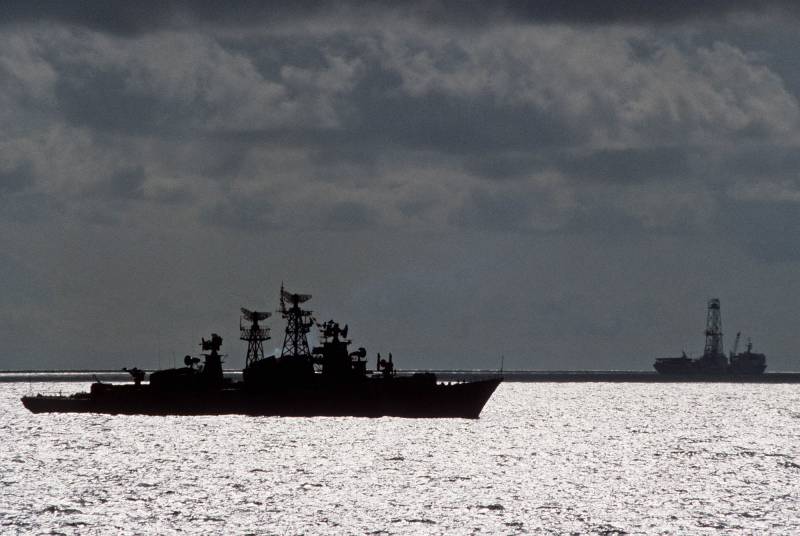 In the first part of the article it was shown that the USSR, and then the USA, began at the turn of the 90s of the last century a large-scale reduction of fleets. Let us ask ourselves a question - what was good in this process and what was bad? Obviously, the reduction process was multifaceted and consisted of objective, inevitable processes, as well as coercive actions aimed at consciously reducing combat capabilities fleet. The latter is a political decision aimed at defusing tensions between the superpowers.

Among the objective and inevitable processes are - reducing the level of tension and the likelihood of a full-scale war, the release of human and financial forces, bound by huge armies, for peaceful affairs. In addition, some of the recycled equipment in any case had to be written off in terms of life. This is all wonderful and can only please.

The subjective processes, on the other hand, include the compulsory loss of combat capability and the elimination of equipment, which has not yet fully given up its resource to the defense of the Motherland. We are not talking about people, since this is not part of the task of this work.

Focus on the purely technical aspects of the problem. Decommissioning of the ship can be carried out on a strong-willed decision of the command to develop their normal life. This is possible when the ship was no longer needed, its modernization and operation is not advisable. Or because of the complete use of the resource - by old age.

If we calculate what proportion of ships that were destroyed before the end of their service life in the total utilization flow, it will be possible to understand how carefully the management of the fleet and the state treated the resources available. It is clear that if the inevitable task of reduction has arisen, then it is better to get rid of obsolete trash, and not the best and most valuable combat units. The ship is not built to go on needles a few years after construction. But what if the authorities thoughtlessly sent to the smelt not only the outdated trash, but also the latest weapons? And what about the situation with the enemy? Indeed, it is one thing when under the guise of abbreviation you write off something that should be written off as well, since it is hopelessly outdated. And it is quite another thing when you send the latest technology to the scrap, in which the money and strength of your people were invested several years ago.

How to separate the new from the old? As a conditional barrier cutoff, the author considers the most objective indicator - the service life in 20 years. If the ship is written off after serving 20 years, then we can assume that the funds invested in its construction, one way or another, spent with benefit. 20 years the ship defended the interests of the country - this is the return that is required of him. But if the ship goes to the scrap, not having served even 20 years - it already looks like wrecking. There are exceptions when the newly built ships very quickly become morally obsolete and their modernization is comparable to the construction of new ones. Yes, this is possible. But only if it is an exception. And if this is a system, then this is already wasting public resources. It also includes the premature destruction of equipment due to the inability to properly maintain and repair it.

All new - in a landfill!

Table 4 shows the total tonnage of scrapped ships under 20 years, and the percentage of total scrapping. It can be seen that before the upheavals associated with the collapse of the USSR, the share of writing off new ships ranged from 0 to 15%. In other words, both sides tried not to remove the newest weapons from the squad.

Simply put, the massive reduction that began in 1987-1990 as a positive process of detente in the Cold War was carried out quite cleverly - mostly old equipment was disposed of. There really was something to get rid of without regret. USSR copied entirely on what did not fit submarines 613 projects, 627, 658, 611, 675 and other surface ships -. TFR 50 projects, 204, 35, destroyers 56 projects, 57, 30-bis, boats 205 project cruiser 68 -bis and another. Of the relatively new ships, obviously unsuccessful ones were decommissioned, for example, the nuclear submarine of the 705 project, or the nuclear submarine of the 667A project, which in any case were subject to write-off under the SALT and START agreements, and it was too expensive to rebuild all of them into the carriers of cruise missiles.

But since 1991, and after the collapse of the USSR, this process has changed structurally, and ships that had recently descended from stocks have gone to junk. No other than deliberate sabotage can not be explained. 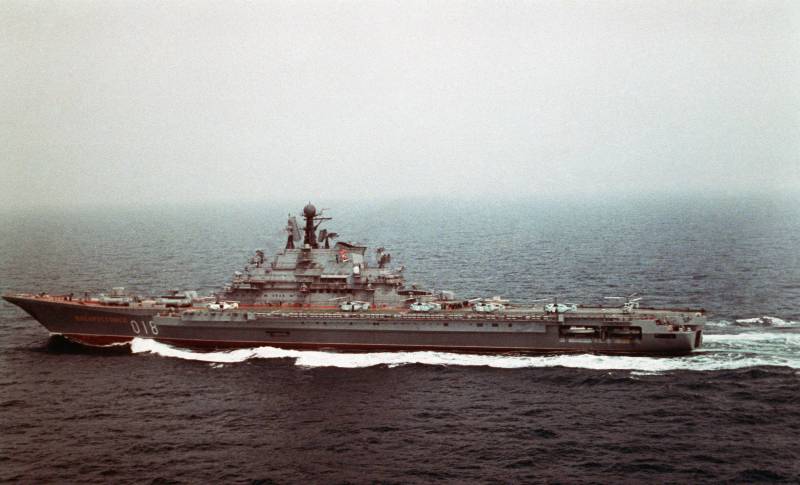 The absolute leader in terms of displacement / service life is the Novorossisk TAVKR, which has served just 11 years.

At the same time, in the United States, reductions didn’t seem much more rational. In the 1995 year, when Russia decommissioned ships younger than 20 in years, with a total tonnage of 300 thousand tons (96% of the total volume for the year), in the United States just the same new ships were scrapped by 35 thousand tons, or 23% of the total tonnage. The difference in 10 times! The average values ​​of the share of new ships in the total volume were only one time closer to the Russian ones - in 1996-2000, reaching 30%. In other periods - no more than 5%. In just the years of cuts, Americans wrote off 4 times less than the tonnage of ships under the age of 20 years. 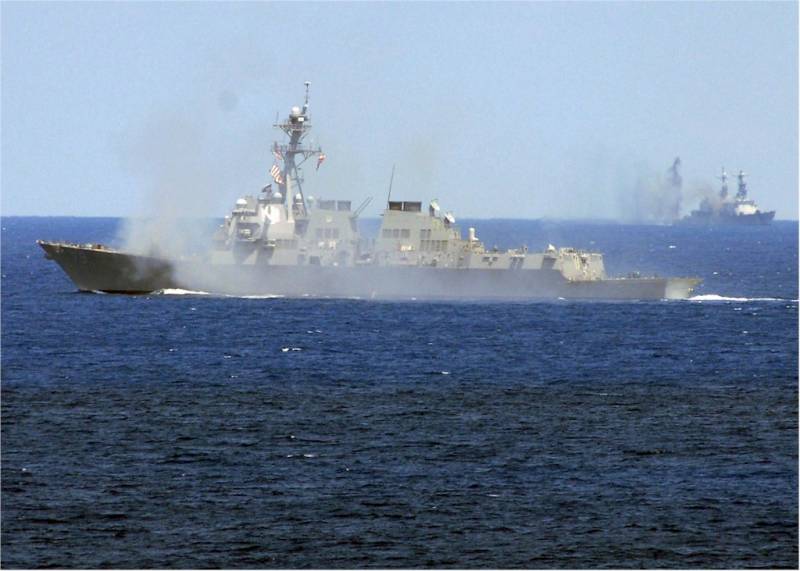 The DDG-79 Oscar Austin destroyer conducts artillery fire on the decommissioned Conolly destroyer of the Spruance type. The latter served in the US Navy 20 years.

After 2000, the destruction of new units in Russia has decreased, but reached zero only in the last 5 years.

Perhaps someone seems far-fetched estimated criterion of "old age" in 20 years. Why not 25 or 15? I hasten to reassure the reader - the author has conducted calculations for these ages too. The situation has not changed dramatically. Ships younger than 15 in the USA over the years of active reductions were written off in 13 times less than in Russia. And if you start from the number of "25 years", then in 2 times less.

The calculations made it possible to separate the ships, the decommissioning of which was natural, and in any case they had to be disposed of. Just the time of their withdrawal coincided with a general large-scale reduction. And now it is possible, not in words, but in numbers, to measure the damage inflicted by our own authorities to the navy.

Depending on the evaluation criterion, the authorities of Russia deliberately destroyed the efficient modern ships in 2-13 times more than the USA, and the total tonnage within 450 thousand tons - 1900 thousand tons. The greatest part of these losses (85%) fell on the period of Boris Nikolayevich Yeltsin’s rule ... 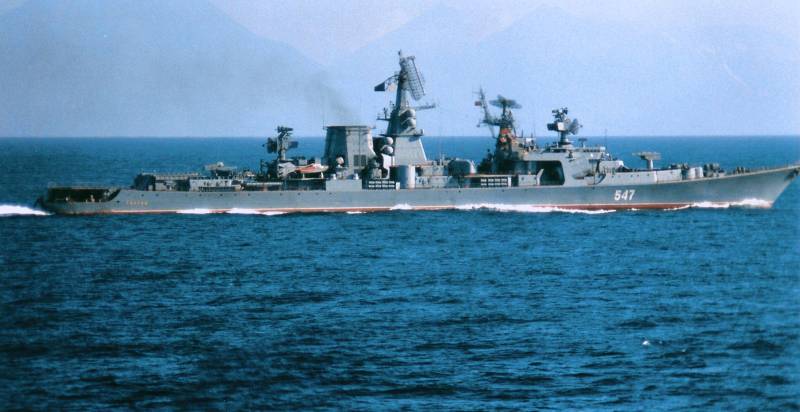 BOD "Tallinn". Served about 15 years. Written off in 1994 year. At the time of write-off was in perfect technical condition.

By itself, the cancellation of ships, even if relatively modern and still good-quality, is still half the problem. If they are replaced by newly built, even more effective combat units, the disposal process can be assessed positively - fresh blood is poured in, accelerated renewal is underway. How was this with both sides?

The USA, even incapacitating relatively fresh combat units, actively filled the fleet with even more powerful ships. Construction did not stop them even once. Every year, the US Navy received something new. Getting rid of junk, they gave the sailors something in return. Of course, the total number of the fleet also declined, but very smoothly and not as much as in Russia. You can consider this decline natural.

In Russia, with the collapse of the USSR, construction was rapidly deteriorating. In the first post-Soviet five-year plan, everything looked quite rosy in the first place because of the completion of ships built back in the 80s. This process went by inertia. But gradually everything that was left of the USSR ended. Were new ships laid? And how did they finish building them?

Table 5 shows the number of hulls being laid, as well as the proportion of completion of the number of pledged (with the exception of landing ships and minesweepers). In the Soviet years, it was the norm to build on 16-18 cases and finish building almost everything. In the first 5 years of the RF, the bookmark did not stop completely - on average, around 5 cases were laid per year. But the completion ... Less than half of the pledged was brought to commissioning. Part of the bookmark buildings before the 1990 year was not completed, therefore the 91,3% figure during the 1986-1990 period is also largely on the conscience of the Yeltsin era.

In 1996-2000, the entire 2 enclosure is embedded. Shipbuilding record! During the same period, the US Navy received 36 brand new ships ... 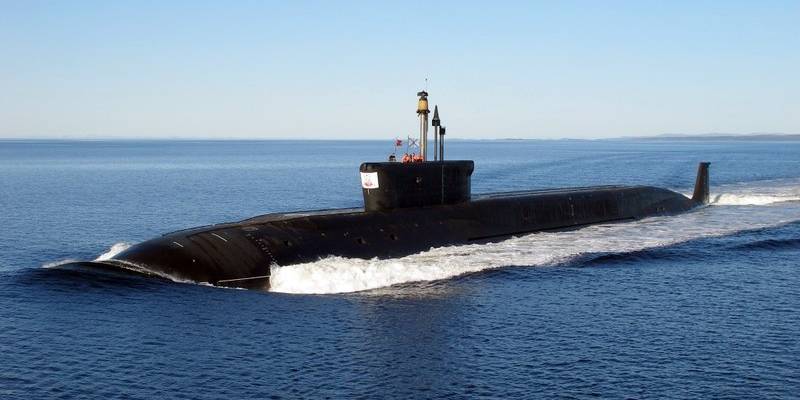 In 2001-2005, the first moves began. And at least they could finish all that was laid. Only in the last 5 years has any progress been made. Still too weak to rejoice.

Thus, for all the post-Soviet times, the smallest average annual number of bookmarks of new buildings and the least productive completion falls on the period of Boris Nikolayevich Yeltsin’s rule ...

In the first part, the very fact of the existence of a mass ship utilization by both sides was indicated. But to judge the benefits or harms of this process was clearly impossible. Now we can give such an assessment. The abbreviations begun in the USSR are quite adequate - due to the outdated technology in the new Russia, it is not the old, but the new technology that has become a destruction. We can express it in concrete numbers - thoughtless, premature destruction of ships cost Russia 1200 thousands of tons of displacement, and 85% of this number fell on the years of Yeltsin's rule. Similar losses to the USA turned out to be smaller in 4.

Construction during the Yeltsin era collapsed 5-8 times, compared with the Soviet period. While the United States reduced construction volumes by just 20-30%.

This is the net loss of our country, without taking into account the cancellation of ships that have served their time, which in any case should have been disposed of.