Fukushima as a special operation

February 19 2017
36
Three non-nuclear principles prohibit Japan from owning, producing or importing nuclear weapons into its territory. However, the ruling circles are trying with all their might to circumvent the ninth article of the country's Constitution.


Formally, Japan does not possess nuclear weapons. However, the facts that can not be hidden at the present level of space and geophysical monitoring, say the opposite.

Chinese media have put forward their version of the disaster at the Fukushima nuclear power plant in March 2011. With reference to anonymous sources, it is claimed that the earthquake was caused by a failed nuclear test. The accident at the Fukushima-1 nuclear power plant was staged to hide the true causes of the spread of radiation. The hint by the governor of Tokyo Shintaro Ishihara about the possibility of using nuclear weapons against China also speaks in favor of this version. Soon after these words in the Pacific Ocean off the northeast coast of the main island of Honshu was recorded an earthquake magnitude 7,4. In addition, news agencies have distributed photographs from outer space of a huge whirlpool capable of carrying even powerful ships into the abyss. This funnel was formed in the ocean after an earthquake, but no one could explain the reasons for its occurrence.

The failure of the power supply system at Fukushima-1 NPP looks suspicious. The only rational explanation is that the Japanese deliberately allowed a leak of radiation in order to divert attention from the unsuccessful test of 9 in March of 2011.

The crew of the US Navy aircraft carrier "Ronald Reagan", traveling to sea exercises jointly with South Korea and located in the ocean not less than fifty miles east of the emergency nuclear power plant, received a monthly dose of radiation, while on land people were evacuated within only a radius 20 kilometers from the source of danger. Everything falls into place if it is assumed that the source of the main nuclear radiation was in the sea much east of Fukushima 1.

And finally, all experts are alarmed by the fact: the Japanese side is still not reporting what is really happening at the nuclear power plant. Neither the public nor the representatives of international organizations - the IAEA and the World Nuclear Association - are aware of it.

9 September The Japanese Ministry of Agriculture, Forestry and Fisheries provided very interesting data for 2015 a year. It follows from them that radioactive elements were found in 17 of Japanese prefectures in 0,1 of a percentage of staple foods. In 2013-m, that is, two years after the accident at the nuclear power plant, according to the results of a routine survey conducted in Fukushima Prefecture, it was stated that the consequences are still very tangible. Fishermen from the city of Iwaki to this day do not conduct fishing, as radiation leaks into the ocean, as the authorities say, continue.

Taking into account the fact that all protective measures were taken at the station, and this is an indisputable fact, we can assume: the source of radiation is still in the ocean.

Let us pay attention to the January statements by the Japanese authorities that the country does not intend to support in the UN General Assembly the resolution on the start of negotiations on the global ban on nuclear weapons in 2017. With all this in mind, it is possible to assume with a high degree of confidence that Tokyo has nuclear weapons, although with all its strength it hides it from the world community.

Recall that Japan is the country of the most advanced dual-use nuclear technologies. At the Tokai plant, the Japanese created an installation to test equipment for processing fuel and reproduced material (Recycle Equipment Test Facility - RETF) from two light-water Mondzue and Dsee reactors, which use plain water as a coolant to slow down neutrons and (or). According to experts, plutonium accumulated at RETF is cleaner than weapons grade. It contains more than 96 percent Pu-239. Accumulated for 10 years of radioactive metal is enough, according to various estimates, to create 70 nuclear charges of various capacities. 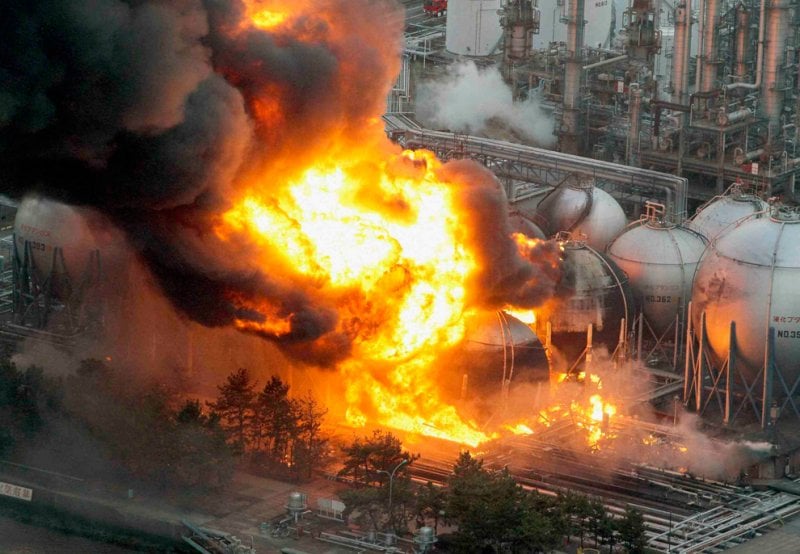 It is likely that Japan now has the largest reserves of plutonium. Experts from the US Department of Energy are confident that it can be used to manufacture nuclear weapons, so its civilian use is risky.

Recently, the leader of the Liberal Democratic Party, Ichiro Osawa, said that the country could produce "thousands of nuclear warheads." And former Secretary General of the Cabinet Yasuo Fukuda continued: “Bans in the constitution do not mean that Japan cannot have nuclear weapons.” According to him, more than fifty reactors are dual-use objects: they now work for the civilian needs of the country, but if necessary, Tokyo can easily rebuild them in a military way. Japan had about 2016 tons of plutonium on the 100 year. And nobody stops its production.

Japan's non-nuclear status is a fiction. The country, allegedly adhering to the three non-nuclear principles, deceives the world community and even the United States, whose deadly arsenals are concentrated on the islands of the Ryukyu archipelago for almost all post-war years.