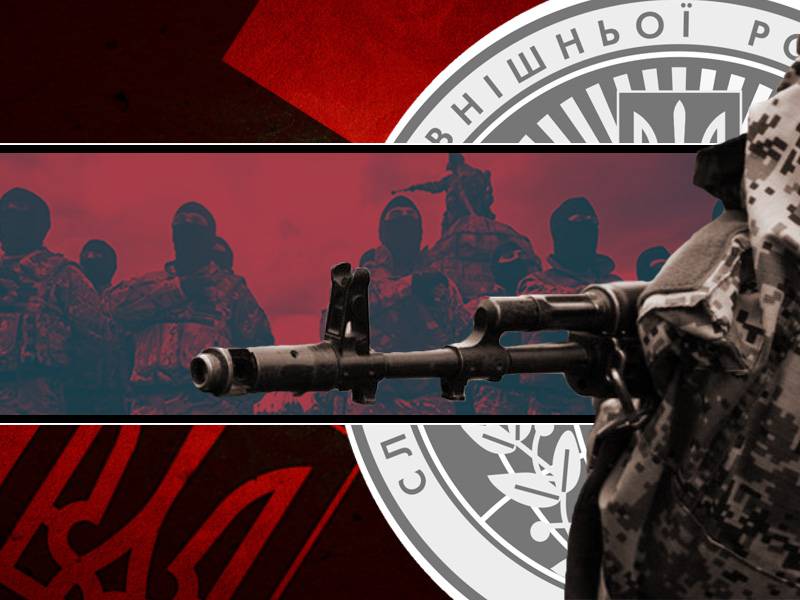 When autumn comes, when the first cold air flows cover the ground at night, snakes, and simpler reptiles, gather in lowlands, bury themselves together with their relatives in foliage, gather in decent size and coils and fall asleep. Law of nature. The reptile cannot live and hunt in the cold. He needs the sun to disperse blood through his body and go about his snake affairs.

I remembered the reptiles because for several days in the informational messages of the Ukrainian, republican, and Russian mass media, information about the "disappearance" of a serious reconnaissance group of the Ukrainian Armed Forces has slipped. Agree, a group of up to 25 people (?) - really serious power. And now ... gone nowhere. Already on Sunday, the Ukrainian Armed Forces reported a loss of communication with the group. "The second day does not go on the air ..."

Today, many of those who are interested in the situation in the Donbas are wondering: "Why was all this necessary?" Why is this "alignment" of the arc? Indeed, despite the fact that legally the Minsk agreements are already nothing, all participants in these negotiations continue to work there. So, in fact, Minsk is alive. And there was no danger to the Ukrainian Armed Forces and other parts and divisions of the security agencies of Ukraine. We will answer this question below.

Increased intelligence activity in some of the areas of the contact line is a sure sign that some “sabantuy” is planned there. But the whole world has been talking about Avdiivka for two months now. What does Lugansk have to do with it? Why start there? And why exactly did the group "disappear" there?

The Ukrainian military department bashfully calls the group "observers." The group performed the task of visual observation of the Republican positions. An 25 scout man with binoculars and stereo tubes sits in the gray zone and watches. And the figure itself is very doubtful. A more realistic figure is the 10-12 person. Stone Age. Because they are being watched by enemy drones and other "wise technique".

Troop scouts always work. And the places of their "lezhek" have long been known to the enemy. Well crawling all winter. Looking out for something. Crawled, crawled away ... They do not attack posts and secrets, so let them live. It is no secret that in a civil war, opponents, if not actively engaged in hostilities, very quickly become "buddies." They know about each other almost everything. Listen to the air on all frequencies of the enemy. It is in the order of things.

But the emergence of a serious group of intelligence can not remain unnoticed. 25 man is not a troop "all in the mud and in ... branches", these guys are more serious. From the headquarters of intelligence. Kiev. And nonsense-type reconnaissance of the location of machine guns and mortars will not be involved.

Such a group appears only after the aisles are prepared, the places of the “bed” in the rear of the enemy. Even warehouses with additional supplies of food and ammunition. Those. when serious work is done by agents "on the other side". And this time and money. Because the group is doing no less serious work.

We are often asked about the possible purpose of such a unit. Loud attack? Like killing Motorola or Givi? Attempted Carpenter? What could be the goal?

Indeed, the figures among the commanders of the LC, raspiarennyh like dead commanders, no. Everyone does their own thing. Someone in command of parts and divisions. Someone is engaged in communication with the press. Someone working in the civil field.

Carpenter? After the last assassination attempt, he is guarded in such a way that it simply does not come close. And what will give such an attempt? Nothing. It does not bother anyone. Does his job. But the group was going somewhere ...

And now I will say what will be the discovery for some readers. In Lugansk, they knew that such a group would be! From where Here you need to slightly forget everything that you have heard in television programs and read in analytical articles. Imagine that you are "starting from scratch."

I'll start from afar. With the blockade of Donbass "veterans of the ATO." What is the purpose? Stop trading with "separatists"? Stop buying coal, without which Ukraine’s energy sector cannot exist? Stop buying metal for your production?

The Prime Minister of Ukraine and other officials have repeatedly stated that Ukraine cannot survive without Donetsk coal. But no serious action against the "blockers" is not carried out. Semenchenko with deputy crusts calmly stops the police generals? Is it not in Ukraine? Someone will believe in the law-abiding Ukrainian authorities? But the facts are stubborn things. The blockade is, and no one is going to shoot it. Even at the cost of huge risks of losing the heating and electricity systems in the eastern regions. Moreover, an emergency headquarters has already been created. And already announced rolling blackouts in seven areas.

Two months from the television screens we are told about the shelling of Avdiivka. On the "alignment" of the line of contact. On violations of the Minsk agreements. Two months perish civilians and soldiers from both sides. And what is the real result of all this? The one that has already reached the APU? But he is!

Remember, in the first half of December last year Avdeevka Coke Chemical Plant was completely shut down? The general director of the enterprise, Musa Magomedov, officially announced that the enterprise had been disconnected from electricity and stopped working. And who will answer the simple question? Who shot on coke? Who needed to stop the enterprise, without which Ukraine’s metallurgical plants would practically stand up?

Now let's combine what I wrote above to the system and get an answer to the question where the group was going. What republic is a huge metallurgical plant? In what city? Combine, which worked even when the battles were very close. Combine that today works in two shifts? Alchevsk!

But back to the missing group. Yesterday, the information portal "Lugansk 1 info" published information that the RDG of the Ukrainian Armed Forces during the transition through the "gray zone" fell into a minefield. The portal refers to the servicemen of the 6 regiment of the people's militia of the LC. It was the scouts of this regiment that allegedly intercepted the RDG radio communications about the incident with the command of the Armed Forces of Ukraine.

Minefield, hit on which almost brought down the entire group? Yes, and installed where it could not be. Above, I wrote about the preparation of such operations.

And quite "fun" becomes further. "They went on the air, asked for help, but no one came to the rescue." The scouts, who openly tell on the air about their problems ... I wonder why they also did not indicate the exact location of their location? Especially after that. “We didn’t want to go there, especially as they looked like they were. In fact, nobody looked for them, nobody came to the rescue. They were left to die.” Kindergarten, younger group.

Anyway, the result of the attack is obvious. Group destroyed. The task is not completed. Even the fact that they did not pull out the remnants of the group after the failure is quite understandable. Military intelligence officers are well aware of the background of such "SOS". Primitive "catch on live bait". Yes, and the attitude to the "white capital of the capital" corresponding.

In any case, whatever happened there, in fact, for the first time in almost three years, Ukraine recognized that soldiers and officers were dying not only from artillery fire and snipers. There is a full-fledged war. With the participation of military personnel of all specialties. The losses incurred by the Armed Forces of Ukraine and the punishers are completely different than those on duty “one soldier was killed and two, unfortunately, injured” from the mouth of the MO speaker. The country is once again taught to the coffins. As it was already in 2014-15.

In the spring, when the sun melts the snow, when the stones are heated by the warm rays of the sun, the reptiles will come to the surface. The reptiles will start their own business. Will multiply and multiply. Kill other animals and people with your poison. Scare your view. And before spring is not far ... I wonder if Ukrainians will be able to fight them?