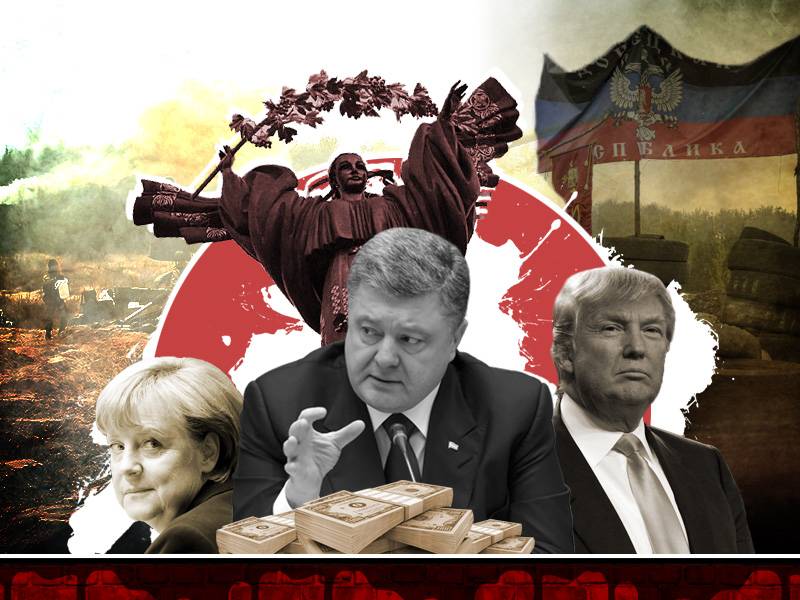 The Ukrainian army is trying to take the Donbass in ticks in order to subsequently crush. Apparently, Poroshenko is preparing a large-scale offensive in the near future. Such a kind of preparation for the next meeting of the "Norman Four" in the format of negotiations of the Ministers of Foreign Affairs.

Kiev “strategists” are well aware that they are waiting for them in Minsk in the near future (the exact date has not yet been set, but all the key players insist on urgency due to growing tensions), therefore they are trying to get ahead of events. The western allies of Poroshenko are trying to pacify their overly aggressive vassal (this is putting it mildly), and each individually has already painted a picture of a clown entangled bleak for reformers.

Donald Trump did this by phone and, judging by the reaction of Bankova and Ukrainian militants in the southeast, the “call for peace” was tough and not tolerant of reservations. For instructions Merkel Peter flew himself and received the same answer. Berlin and Washington are ordering Kiev to end the civil war, withdraw the troops and sit down at the negotiating table on conditions that are extremely unfavorable to the chocolate maker. France, it seems, is generally trying to wash their hands and shift the entire burden of responsibility to the "elder brothers."

It is a logical position, because Paris initially avoided the Ukrainian swamp and did not directly participate in the organization of the Kiev zoo, limited to verbal support and meager handouts in the form of humanitarian aid and microcredit.
Be that as it may, Poroshenko does not count on help from the Champs Elysees, and therefore did not rush there immediately after the rebuff. At the meeting in Minsk, the conditions will be dictated by two players - Moscow and Berlin.

Paris will either take a neutral position, or support the main stakeholders. Kiev is destined to “obey and obey” and Ukrainian diplomats only aggravate the situation every day and give up their positions in advance. After a series of scandals, arranged by Klimkin and the company, which recently rush to Europe, like a flock of wild monkeys, coercion humiliating for patriots can turn into a cruel and sophisticated spanking. Woe to the diplomats with three classes of parish behind their shoulders, in a very short time, they sentenced Ukraine and, in particular, their revolutionary regime to an international anathema. And every day they tighten tighter around their necks.

It is therefore not surprising that Poroshenko goes all-in and makes a bet on the war. He has no other way out, and while his mad monkeys are sputtering saliva, swaying society, he is preparing the shock fist of the APU for a breakthrough and an offensive in all directions.

And it is natural for him to spit on collateral losses. On the one hand, he will even benefit from another cauldron and thousands of corpses in Ukrainian morgues, for a public response washed with blood will help delay the inevitable fall. Although still another option, with a breakthrough and a successful offensive, it suits him more. This is exactly what the Ukrainian Armed Forces have been preparing for almost a month now, gradually increasing their strength and breaking the line of demarcation and a kind of neutral strip.

In spite of the fact that the Avdeevskaya adventure has ended in complete failure both “in the field” and in the diplomatic arena, the APU continue to press on the Donbass, and not only in the Donetsk direction. Yes, near Donetsk is the hottest now. Round-the-clock attacks and regular attacks by Ukrainian militants turned the industrial zone into such a hot spot that even OSCE observers loyal to Kiev could not withstand the pressure and, probably, for the first time in three years, they directly accused the Ukrainian Supreme Council of violating the Minsk agreements.

Usually deaf-blind Alexander Hug tried to rein in the APU and demanded to withdraw the troops, for which he was immediately branded in Kiev. Just a couple of days ago, he was openly accused of escalating the conflict. They say that these observers, by their careless actions, provoked the “heroes” into heavy fire, which by chance would not subside.

And while the OSCE, as usual, slowly digests the information and is only going to react, Poroshenko smartly prepared the country for a bloodbath. The draft law on the introduction of martial law has been processed and is awaiting only presidential consent. Still, still hoping to play on the billionth tranche of the IMF.

And the 600 of millions from the EU for the Carpathian forest has not been received yet. As soon as the money issues are resolved, Petya will happily sign the country's verdict and begin the final stage of the destruction of her fooled flock of sheep. In the meantime, the preparation for the slaughter is in full swing and the APU has imposed Donbass from three sides. The Ukrainian General Staff is trying to organize peculiar mites with an auxiliary group in the area of ​​Mariupol. And now Lugansk is in no less danger than Donetsk. With only one reservation, that the LC is still not being bombed.

According to Andrei Marochko, a representative of the people's militia of the Lugansk people's republic, Kiev, on the eve, strengthened the APU grouping in this direction, pulling Gvozdika self-propelled artillery, armored personnel carriers and trucks with ammunition to the front line. Also, trains with equipment and manpower arrive at the border almost weekly. In particular, two newly arrived self-propelled guns were spotted in the Popasnyansk region, accompanied by three armored personnel carriers and a dozen trucks with ammunition. Also Kiev throws special units for sabotage and subversive work to the border of the LC.

Potential Ukrainian DRGs (several units from the 8 special regiment) are currently located in the area of ​​the settlement of Happiness and the village of Gorskoe. A large-scale offensive, Kiev, apparently plans to initiate a series of terrorist attacks in the LC. All these movements APU covers dense mortar fire on the positions of the people's militia. Peculiar shock mites are actually ready. Along the demarcation line, Kiev concentrated a serious grouping of troops in the 90 of thousands of servicemen.

Completes the "strategic pattern" serious grouping under Mariupol, ready at any time to support the offensive. Just a couple of days ago, the Armed Forces of Ukraine sent several thousand fighters and a convoy of armored vehicles in this direction. The transfer of such an impressive force was not without scandals, which, in fact, indicated the scale of the operation. 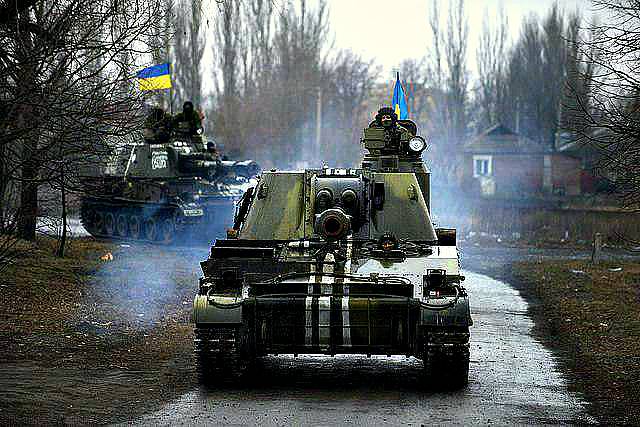 Residents of Kherson and the region, as you know, blocked the APU convoy in Chaplinka, trying to prevent the sending of their relatives to a meat grinder. Public activist Gennady Spivak, reporting the incident, counted in a convoy tanks and armored personnel carriers more than a hundred pieces of equipment. Literally a day later this "colossus" was already seen near Mariupol.

Kiev surrounds the Donbass from all sides and clamps into a serious vice. The next attack near Avdiivka may be accompanied by an attack on the entire front line. The militia must be ready to repel the onslaught of the entire combat-ready part of the APU. In his last spurt, Poroshenko will obviously throw all the meat available.