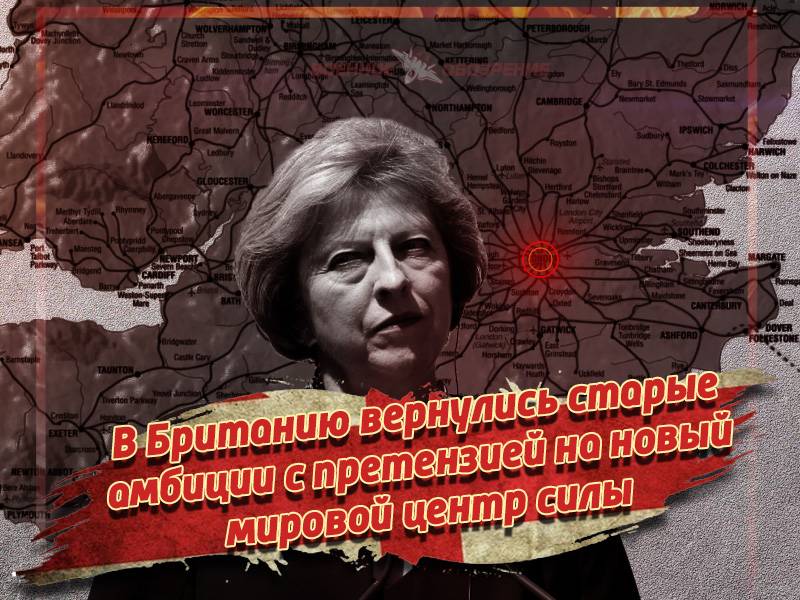 Political London finally interrupted the indecently prolonged pause after the referendum on the withdrawal of Britain from the European Union and took very concrete steps to implement the fateful decision of the citizens of the United Kingdom. Last Wednesday, the House of Commons of the Parliament of Great Britain adopted the bill, which approved the principles of exit from the EU, formulated by 17 in January by Prime Minister Theresa May. For the introduction of the procedure Brexit left to enlist the support of the House of Lords.

Teresa May wants to enter the global arena

Apparently, in the upper house of the British Parliament there will also be no problems with a bill on leaving the EU. All indications are that the core of local politicians reached a consensus on Brexit and chose the toughest of its options. The British economy will leave the single European market with its customs and trade rules, free movement of the population, submission to Brussels officials and the jurisdiction of the European Court.

London will try to negotiate a special relationship with Ireland, and with the European Union to conclude a bilateral agreement providing for a free trade zone, continued cooperation in the field of defense and security, science, education and health, in the fight against terrorism and international crime.

The central point of the bill, adopted by the Plateau of Communities, was Theresa May’s message that "Britain must enter the global arena as an independent country and trading partner." Actually, the British prime minister is working on this all the time after the referendum. May's predecessors differed in that they cruised in the triangle London-Brussels-Washington, complementing or agreeing on a common political agenda.

Theresa May has expanded her travel geography. Recently, for example, she visited Ankara. She discussed with the Turkish president the possibilities of interaction in the Middle East, both within the framework of NATO structures and in a bilateral format. May thus made it clear that Britain in Asia has its own distinct, distinct from European allies.

In December, Teresa May was already in this region. Then she visited Bahrain on a state visit, took part in a meeting of the Gulf Cooperation Council. May met with the leaders of Bahrain, Saudi Arabia, Kuwait, Qatar, the UAE and Oman. The British Premier held bilateral meetings with each of them. We discussed the situation in Syria, Yemen and in general in the Middle East.

Following the meetings in Bahrain, Theresa May expressed the hope that a new chapter will open in relations between the United Kingdom and the Gulf countries, “a true strategic partnership that will allow us to share our opportunities to ensure the security and prosperity of our peoples.” May emphasized: Britain and the Gulf countries have a long-standing overall content. история.

It should be noted that in the recent past, the countries of this region have visited the European leaders - the Germans. There was a federal chancellor here, was the head of the German Foreign Ministry. Together, they tried to connect Berlin to solving Middle Eastern problems, thereby raising the international authority of their country. However, in the Gulf countries did not properly appreciate this desire of German politicians.

There was no clear breakthrough for the British prime minister, although she came to Bahrain Teresa May with a slightly different “mandate”. Preparing to secede from the EU, Britain began to position itself as the political center of NATO in Europe, a sort of younger, but first among Europeans, partner of the United States in the North Atlantic alliance. In the Gulf, the declared ambitions of the British did not take seriously. After all, until then they were not confirmed by the US administration.

This happened after a meeting between Theresa May and President Donald Trump in Washington. Some experts called May's visit to America not entirely successful. In their opinion, the British Prime Minister was not able to establish a relationship of trust with the new American president. However, Teresa May managed to achieve the main goals of her trip.

After the meeting in Washington, May told reporters that she called on Trump, along with Britain, to "cooperate with the Kremlin from a position of strength", insisted on the application of international sanctions to Russia until the parties fully implement the conflict in Ukraine of the Minsk agreements, in the light of Moscow threats.

Donald Trump did not speak out publicly about the statements of his guest. However, after the May visit, the Washington administration adjusted the rhetoric on all positions noted by the British Prime Minister. Thus, Theresa May showed the world that the British are drying up over the ocean, and the plans of London to become an independent global player have certain reasons. Now these ambitions are also supported by a bill on withdrawal from the EU in the wording adopted by the House of Commons.

Excessive optimism of the British authorities

Now Teresa May is trying to gain a foothold as an independent global player. Reuters reported that a spokesman for the British prime minister announced her plans to visit China in 2017 on an official visit. The date of the trip has not yet been determined. But the visit to Beijing has already interested experts.

It will be something other than a meeting in Washington. In China, May will need to present himself to the world not as a NATO, American or European representative and mediator, but as a state leader with an independent foreign policy agenda. There is, however, one “but” ... Except for the sharply pronounced anti-Russian stance, the other outlines of British politics are still poorly viewed. Except, perhaps, claims for a special role in NATO.

She did not appear yesterday. Even when he was prime minister, Tony Blair in Britain was preoccupied with strengthening his military power. They planned to build a couple of aircraft carriers as a priority project in order to take a more active position in the expeditionary operations of the North Atlantic alliance. Now this project is nearing completion. The lead aircraft carrier Queen Elizabeth II with 40 aircraft should be part of the royal fleet this year already. His fellow Prince of Wales will raise the flag of the British Navy in two years.

At first glance, with the advent of modern aircraft carriers, albeit inferior in capabilities to American ships, Britain will advance to the first roles in active world politics. However, not all so simple. The construction of aircraft carriers seriously hurt the military budget of London. This led to failures in other parts of the defense department.

For example, on Friday, the tabloid The Sun spoke about the deplorable state of multipurpose nuclear submarines in the UK fleet. Referring to informed sources, the publication claims that out of seven submarines of this class there are not a single one on combat duty.

Five multipurpose submarines are under maintenance or are awaiting it after troubleshooting. One is being repaired after a collision with a merchant ship in Gibraltar last summer. Another one is being tested after maintenance and, according to The Sun, will not be back soon. Tabloid notes that information about problems in the British fleet is kept secret from Prime Minister Theresa May.

In addition to problems with submarines, there are unpleasant stories and with surface ships. Last summer, for example, on one of the newest expensive destroyers of the Daring type, considered to be the pride of the British Navy, the power plant failed. The ship was dragged from the Persian Gulf, where this incident happened, and is now used as a training ship and floating barracks, since there is no budget for repairing the destroyer.

On the problems in the armed forces of Britain writes not only The Sun. The Sunday Times was also featured on this topic. According to her, "British military equipment is outdated so that it will not be able to protect the borders of the United Kingdom in the event of a serious military attack." As an example, the newspaper cites the technical characteristics of British ships, flying UAVs, armored vehicles and concludes that "the existing weapons create significant gaps in the country's defense capability."

The current situation can be corrected only by increasing allocations for military spending. With this, the "Lady of the Seas" now has obvious problems. London Financial City, which is largely based on the economic well-being of Britain, spoke in connection with Brexit about the transfer of a large part of its assets to the continent. For many, it is obvious that the status of the financial capital of Europe will now move to the German Frankfurt am Main.

“The exit of the UK from the EEA means that banks will automatically lose the opportunity to conduct business throughout the European Union, this will allow Frankfurt am Main to take over the leadership of London,” Jens Weidmann, head of the Central Bank of Germany, said in an interview with the British newspaper The Guardian. This means that the UK budget possibilities will become even more modest.

With such baggage behind you, it is difficult to count on a productive independent policy. Maybe that's why they conceal the real state of affairs from May. At least, on the external field, Teresa May acts as if behind her - a full-fledged British Empire. Hope to become a new world center of power is shared with the prime minister and local parliamentarians who have so actively supported the tough Brexit. Experts believe these sentiments are overly optimistic ...