No noise and no dust

February 11 2017
76
By the 70 years of the last century, a whole series of special-purpose units had been created in the USSR. To conduct covert operations in the rear of the enemy, "specialists" required a special weaponincluding low noise. The samples that existed at that time did not fully meet the requirements of the army, as well as other interested law enforcement agencies, so the Soviet gunsmiths developed a whole range of special-purpose weapons - Val, Vintorez, and others.


The most problematic was the niche of low-noise long-barreled weapons, in which regular Kalashnikov assault rifles of various modifications were used. The shot noise reduction was achieved due to the installation of silencers with rubber shutters and the use of a special US cartridge (reduced speed). However, this reduced the accuracy and effective range of fire - especially given the beginning of the mass distribution of personal protective equipment. 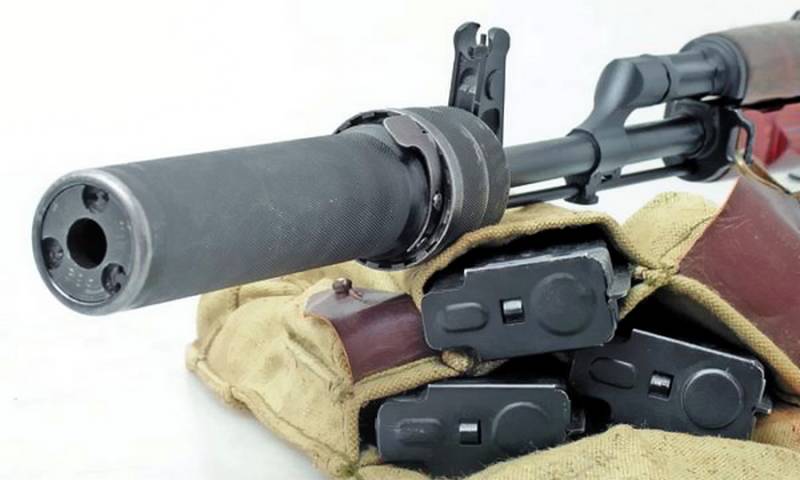 According to the results of a number of studies, it was decided to create a whole complex of new silent weapons for special forces: a pistol, an automatic rifle, a sniper rifle and a grenade launcher.

Of the conflicting requirements put forward by various departments, by 1983, tactical and technical requirements were formulated only for a special sniper complex, which was worked on under the cipher "Vintorez". This later became the unofficial name for the new silent rifle.

From "Vintorez" it was required to ensure the covert defeat of enemy manpower at a distance of up to 400 meters and break through the steel helmet at the same distance. Since the shot noise could be reduced only by using a cartridge with a subsonic bullet speed, it was possible to save the required energy of the bullet on 400 meters only by increasing its mass. The first version of the cartridge was made in the caliber 7,62 mm on the basis of the sleeve of the standard automatic cartridge 5,45 × 39 mm. 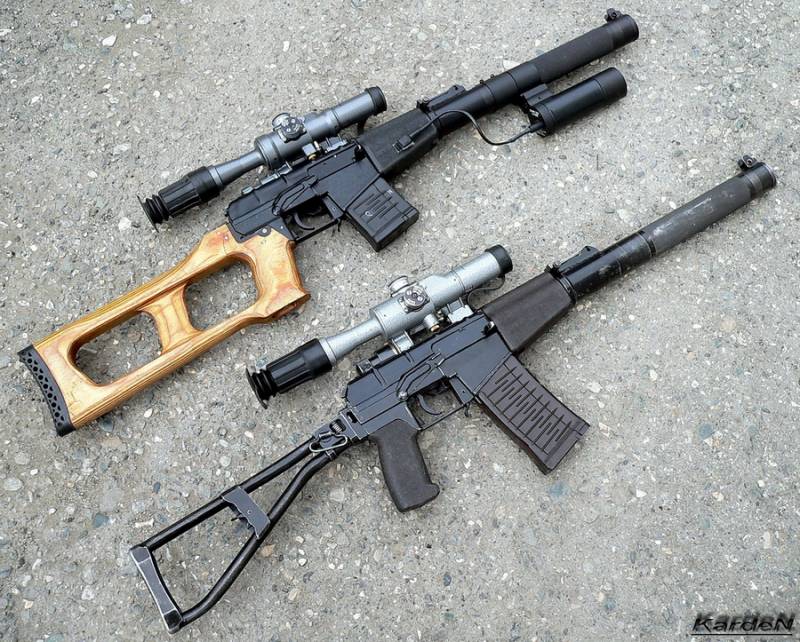 Next of kin: the Vintorez sniper rifle and the special Val machine gun

However, by the end of 1985, the customer finally delivered requirements for a special machine, from which, on the same 400 meters, it was required to pierce not only a helmet, but also body armor of protection class III. As a result, the caliber of the cartridge had to be increased to 9 mm. The new cartridge was developed in two versions: sniper SP-5 and armor-piercing SP-6. It was for them that the BCC (Special Sniper Rifle) was first released, and then the Val (Automaton Special) created on its base, Val, which had a folding metal instead of a permanent wooden butt.

The automatics of the new weapon worked on the principle of the gas outlet from the barrel with rigid locking with the rotary bolt. Actually, the trunk of the BCC and the AU was made short, just 200 mm, having in the muzzle a row of holes drilled through the cuts to divert gases from the barrel to the expansion chamber of the muffler.

Although formally the production of the VSS rifle began in the 1987 year, even before the withdrawal of Soviet troops from Afghanistan, data on its combat use there has not yet been confirmed. Most sources agree that the first war for the new “silent” was the conflict in Chechnya. At the same time, the Air Force and the AU were used by both sides: some militants got a number of special “barrels” when they seized the weapons room of the local KGB, but they simply bought something. 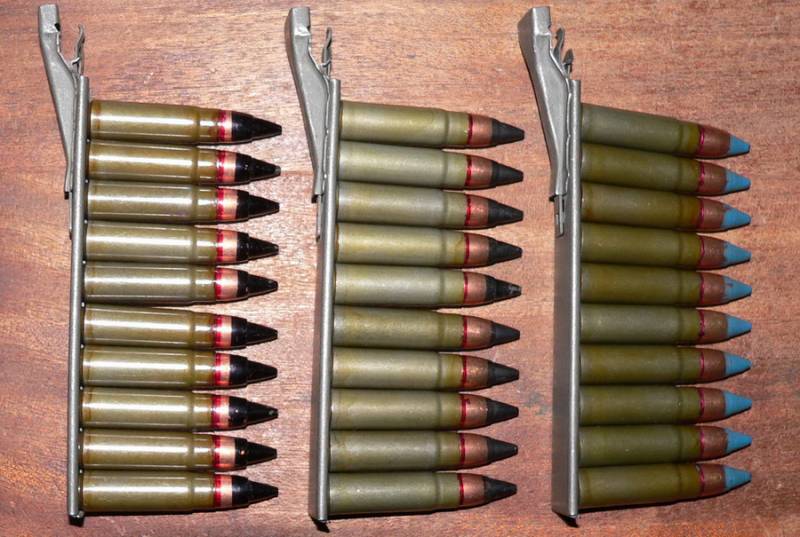 Most of the fighters who used the new special weapons spoke positively about him: WBU and AU proved to be an excellent weapon for special units at short and medium distances. Typical descriptions were quite typical:
“The AU / VSS weapon system is close to the ideal weapon for special forces. Its skillful use allows you to work wonders. For example, during one of the closest fire battles, the reconnaissance group from our unit managed to “fill up” five people, including the head patrol, while the opposing side began to understand something. ”

Actually, one of the main shortcomings that impede the wider distribution and use of ARIA was the technological complexity and, as a result, the high cost of the rifle. For example, the barrel of the weapon was made by milling.
Therefore, at the beginning of 90-x, work began on the creation of a cheaper counterpart. At the same time, the Ministry of Internal Affairs was especially interested in the potential of the new 9-mm cartridge. The used "shortages" on the basis of Kalashnikov because of the great penetrating power and inclination to rebound were dangerous enough for use in the city. In turn, hastily created new models of submachine guns chambered for the 9 × 18 cartridge from Makarov and they could do little against body armor.

This time, designers from Tula and Klimovsk acted as competitors. At TsNIItochmash, a new compact automaton was developed on the basis of AS “Val”: it became the MA (Compact Machine) CP-3 “Whirlwind”. In general, it was all the same "Val", only devoid of an integrated silencer, initially even without the possibility of installing a removable: it was added only on a modernized version of the CP-3M. The result is a compact and powerful weapon that is comparable in size to machine pistols, but is significantly superior to them thanks to the powerful cartridge. 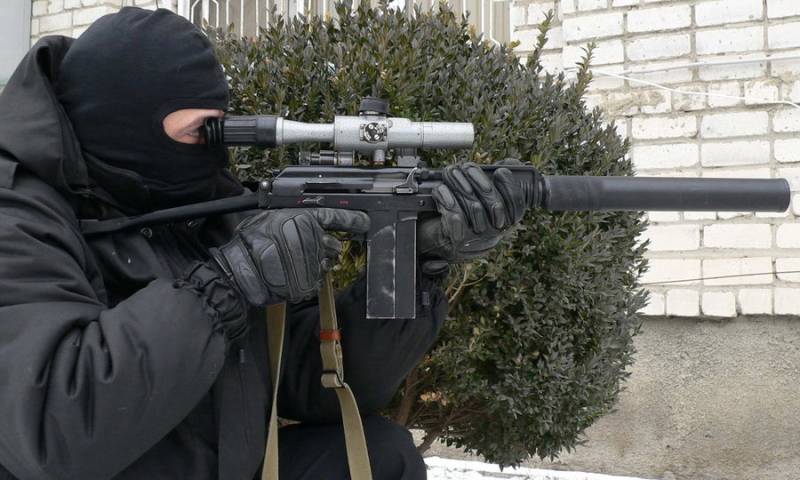 However, in the “hungry” 90s, the work of Tula from the Instrument Engineering Design Bureau, who developed their new machine gun 9А-91 and later the VSK-94 sniper rifle based on it, looked more interesting. Although the Russian army and the Ministry of Internal Affairs continue to buy systems from both developers, according to the results of the operation, the balance is being formed rather in favor of simpler, more reliable and cheaper products of the Tula KBP. Here is the opinion of one of the acting officers of the Ministry of Internal Affairs of the Russian Federation:

“VSK, as a cheaper one, was bought by the Ministry of Internal Affairs in much larger quantities than VSS. Both are in service, because BCC was first purchased, but because of the high cost and relative tenderness, VSK-94, which was proposed as a replacement for BCC, got involved. One of the decoding abbreviations VSK - "Military sniper complex." With similar characteristics, it is cheaper and more reliable than ARIA under severe operating conditions. Most likely, the price is the decisive factor. For greenhouse conditions, BCC is preferable. Accuracy should be no more than 7 cm (according to unverified data). VSK-94 allows careless care. Accuracy is allowed no more than 10. See Warranty BCC direction - 5000 shots, VSK-94 - 6000 shots. If I need accuracy and noiselessness - I choose BCC, if I want to be sure of reliability without long care (intensive fighting, extreme weather and terrain), for self-defense (intense automatic fire, ability to shoot without a silencer) - I choose VSK-94 ” . 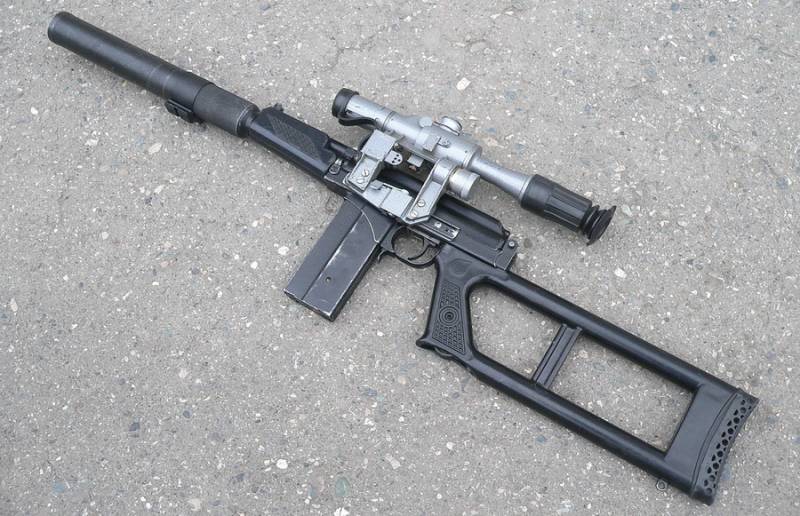 It should be noted that at the moment both in the West and in the Russian Federation a rather significant part of the efforts to improve small arms is aimed at increasing the capabilities of the weapon by giving it as much “modularity” and opportunities for the fighter to configure itself. So, for example, in relation to small-sized automata (“Whirlwind” and 9А-91) the following wishes were expressed:

lengthen the trunk (9A-91);
make the butt retractable with a retainer, like on a chestnut submachine gun;
make silencer PBS folding;
leave the rear sight, similar to that used on the AKC machine.

At the same time, unfortunately, the “domestic producer” reacted and responds to the requests of the final customer much less quickly than private offices, and the latter’s ability to work with service weapons is often limited. As a result, the weapon is modified by the method of “collective-farm tuning”: the necessary details are purchased or ordered to masters at their own expense by the fighters.