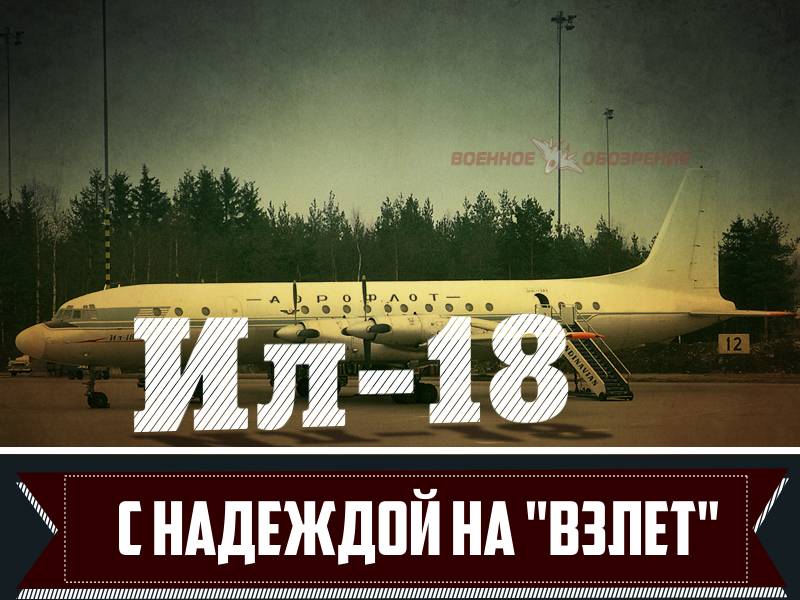 Our story today is about a veteran who this year will celebrate 40 years since his last landing at the airport in Monino. This is the IL-18, and I’m not afraid to call it one of the most remarkable aircraft in our aviation stories. 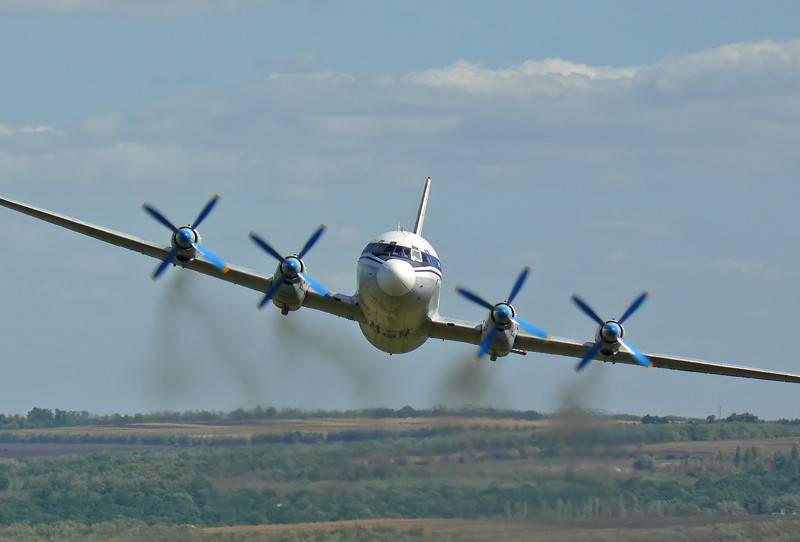 Our NATO "partners" at one time gave this aircraft in its classification a fairly accurate name - "Prostak." The Il-18 was really simple and unpretentious and could be used as you please: a passenger liner, a truck, a meteorological survey aircraft, a fish scout, a flying laboratory, an ambulance plane. 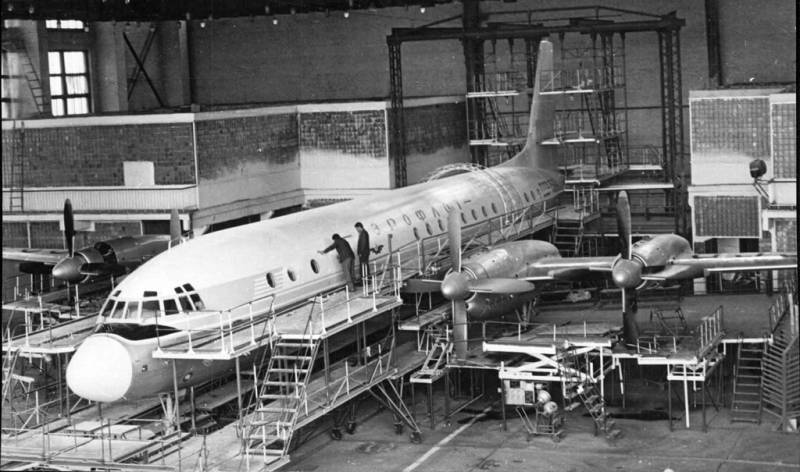 And the military service did not bypass the IL-18. It was produced as a paratrooper, flying class for navigators, an electronic warfare aircraft (Il-20), an air command center (Il-22), an ice reconnaissance aircraft (Il-24), anti-submarine (Il-38).

Even today, the IL-18 still fly where the normal tail plumage of a normal aircraft will curl.

After the end of life, many IL-18 took places on the podium as monuments. But, unfortunately, their fate was mostly not so fortunate on earth.

IL-18B was installed in the park to them. Gagarin in Simferopol. Was commissioned on the metal in 1990-s.

A monument to the Il-18 aircraft was installed at terminal B of Sheremetyevo-1 airport. In 2012, it was dismantled and moved to Khimki park near the railway station. Stood in semi-assembled condition on concrete blocks. An examination of the aircraft was made, as a result, a decision was made to parse it. This, by the way, on the topic of the transfer of such exhibits.

IL-18 was operated as a children's cinema in the city of Zaporozhye. In the last decade of July, the 1999 of the year, the body of the aircraft “successfully” burned down and was immediately disposed of as scrap metal.

IL-18 as a monument until 1993 was installed near the city park in the city of Kyzyl.

IL-18 was installed in the city park of Arkalyk (Kazakhstan) to organize a children's cinema. As a result of the fire because of the fire, divorced by adolescents inside, the plane was actually destroyed. Was taken to recycling.

30 May 1982 was opened in Penza, a children's cinema "Ilyusha", it was located on board the IL-18, on the bank of Sura, near the suspension bridge. Destroyed at the beginning of 90's.

In 1980-ies in Dushanbe, a cinema was opened on board the IL-18 aircraft installed in one of the districts of the city. Destroyed in the early 90-x during the civil war.

IL-18 from 1978 to 1992 It was installed in the Central Park of Krasnoyarsk, it housed the children's cafe "Carlson". Disassembled on metal. 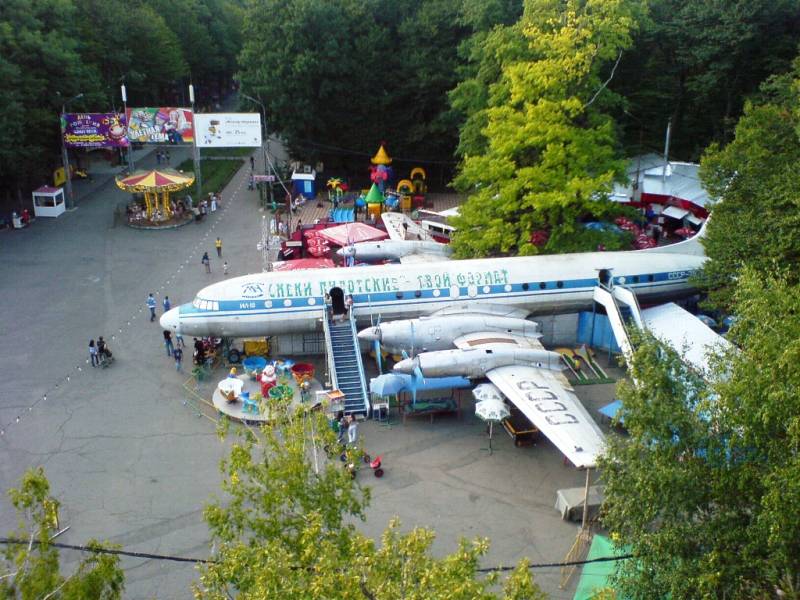 The only copy, except for the museum in Monino, still stands in the Victory Park of the city of Stavropol. From 1981 year. Stavropol became a pleasant exception.

IL-18, which is located in Monino, is the oldest of all. It is still 60-s built. And also going through hard times. The drug addicts once entered the salon through a broken window and made a feast there that ended with a fire. Firefighters saved the plane, but the fire caused him considerable damage.

By the way, on our first visit we did not see the plane, it stands on the outskirts of the open area and there is no access to it for visitors. The plane gradually goes into the ground ...

But thanks to the dictates of the heavens, apparently, IL-18 had two patron / reducing angels. This is Julius and Vladimir Kudryavtsev, father and son. And the plans that they want to bring to life, cause a slight shock. It is nothing less than to restore the IL-18 to the 40 anniversary of the arrival at the museum and make on board it a mini-museum of this aircraft.

When you follow Julius after the burnt plane, you catch yourself thinking that this is some kind of madness. The plane burned out! Which museum? 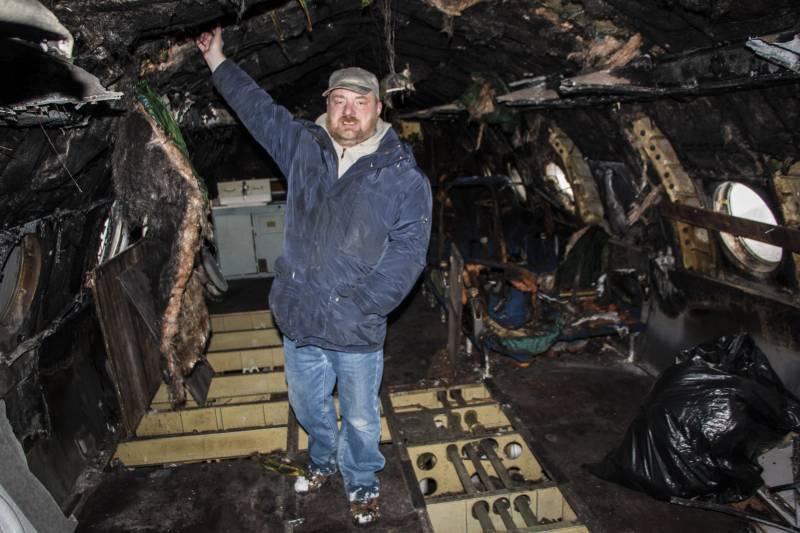 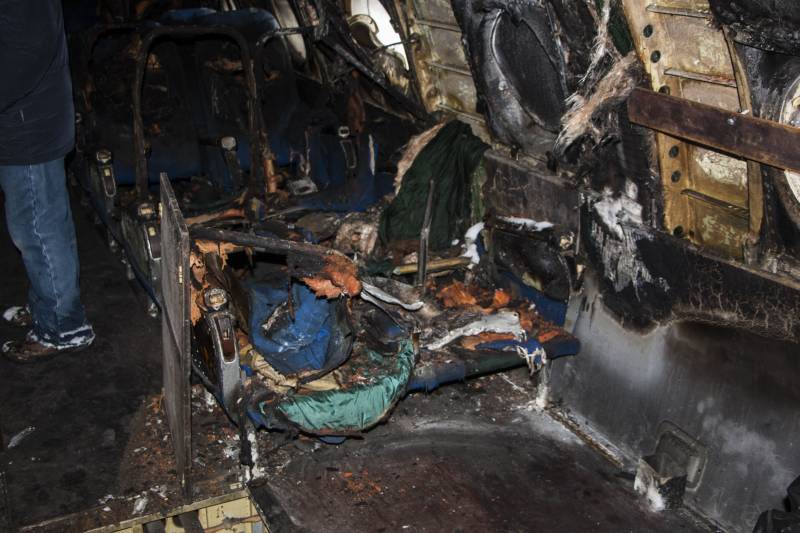 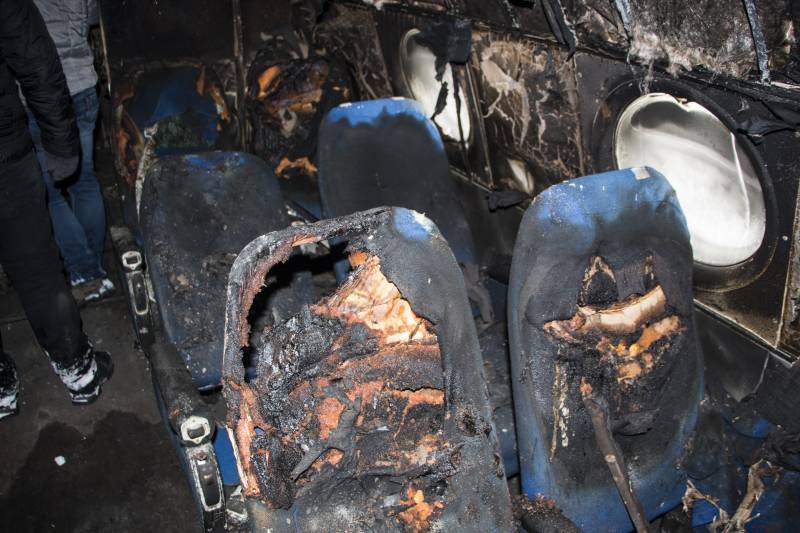 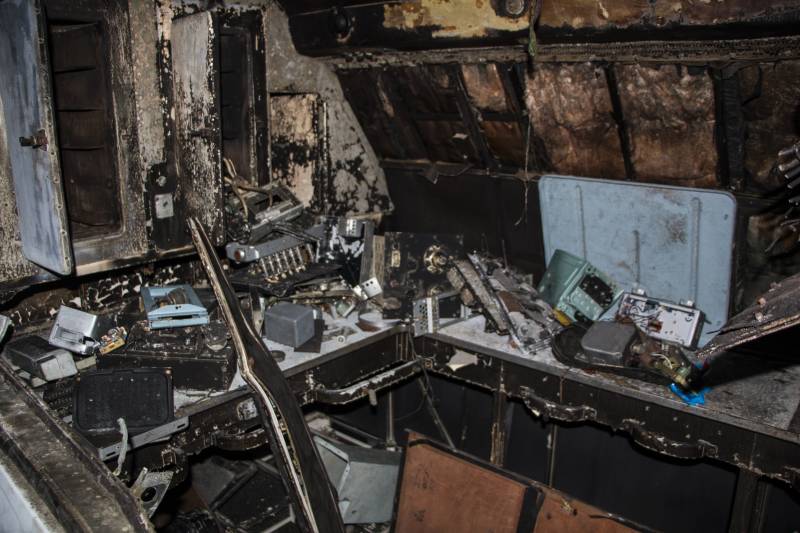 Then this incomprehensible virus of confidence begins to enter the body, and you also start thinking that everything is not so bad. Burned all the seats in the second salon and there is no way to get the same? Yes, in the 70 editions, the chairs were already different. Nothing, in the cabin there will be an exhibition with unique photographs from the places where the IL-18 as a whole and this board in particular entered. Plus, a few chairs still dug somewhere. 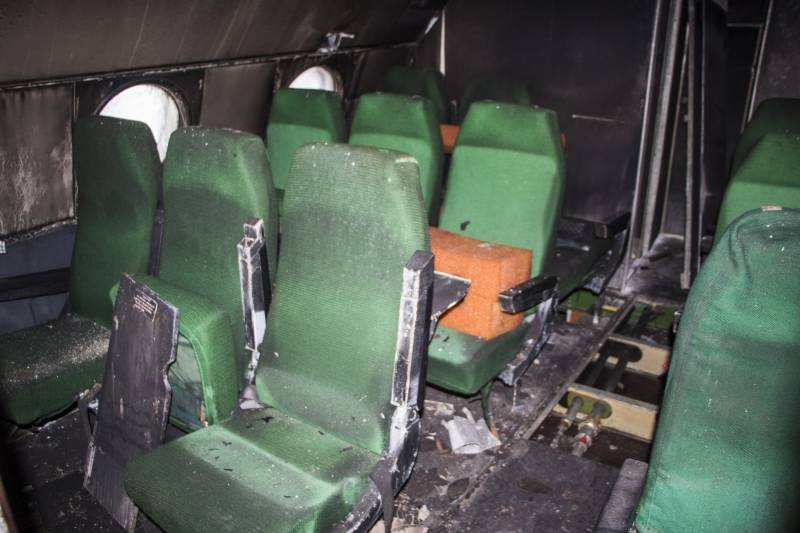 And the chairs will be tightened, and the ceilings are completely cleaned ... 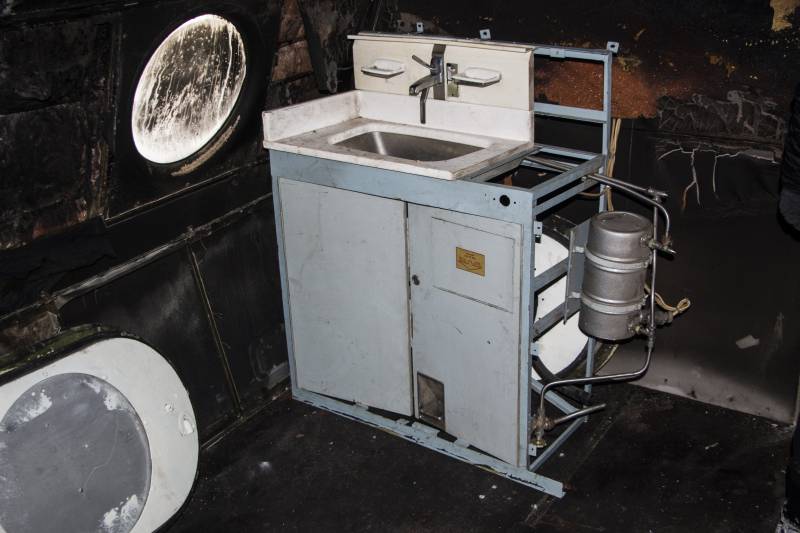 And the kitchen unit will bring to mind ... 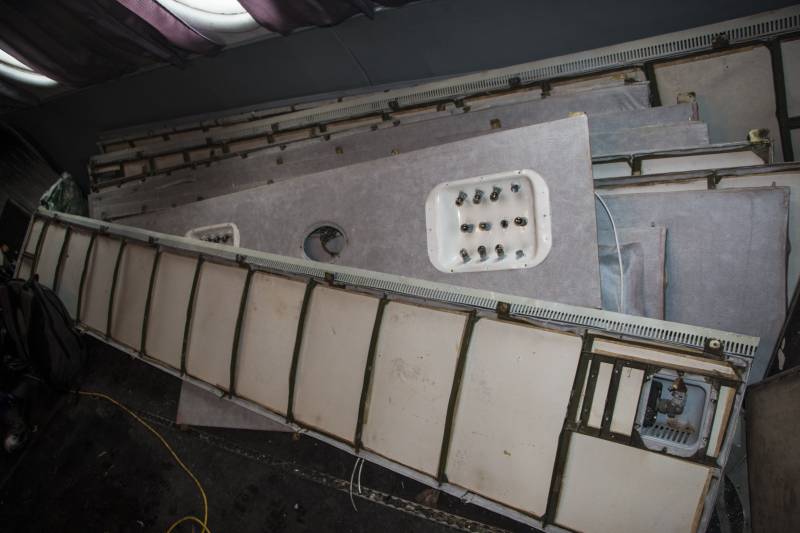 And the panels were just there ... 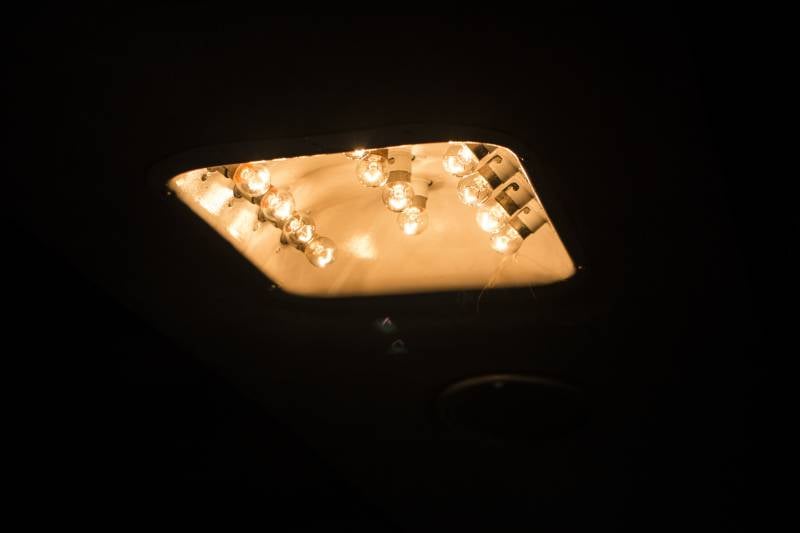 And the wiring has already been restored, the lighting is working ... 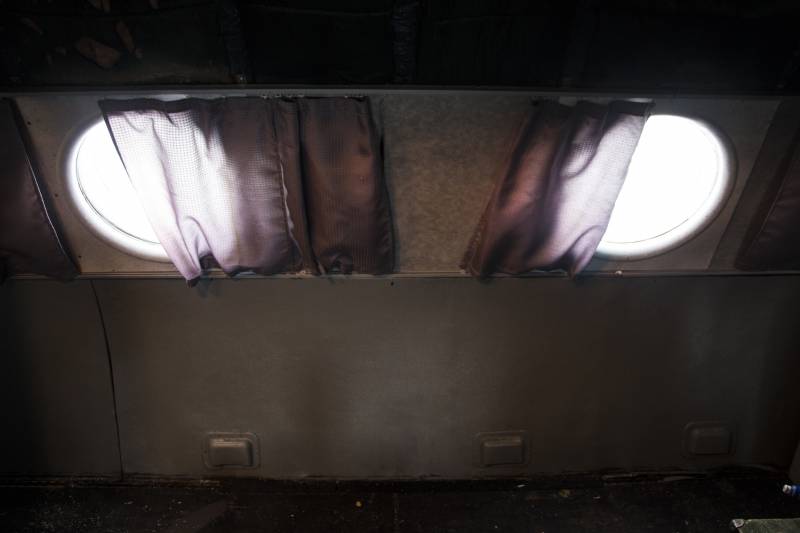 And the curtains even found ... 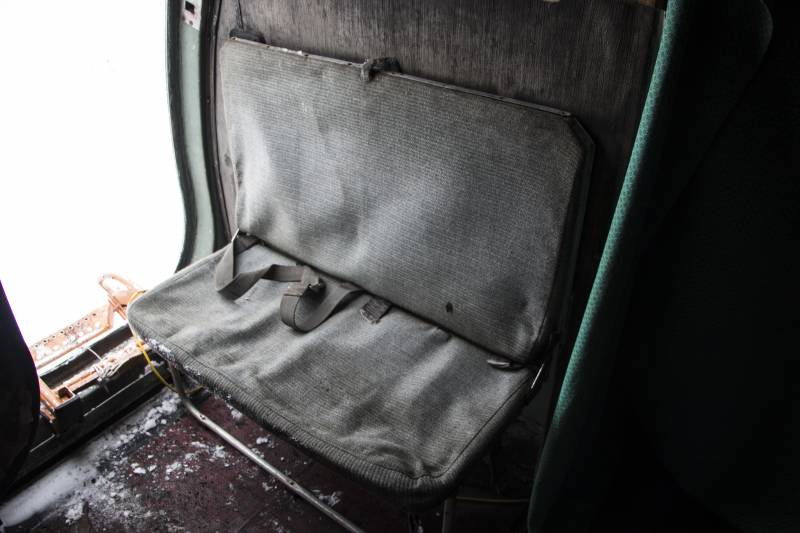 And the flight attendant's place was restored ... 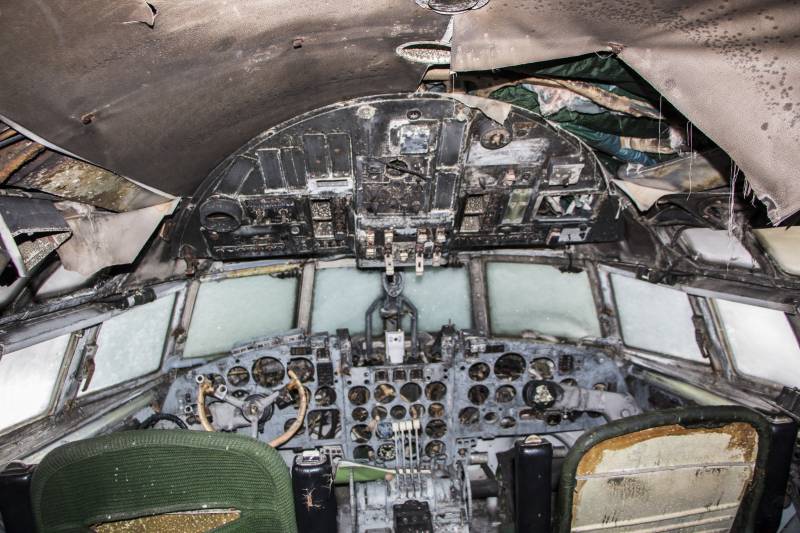 The cockpit looks creepy, but one wheel was given to the waist, then the second will be restored. And in the end, sooner or later, but the cabin will take the proper form. 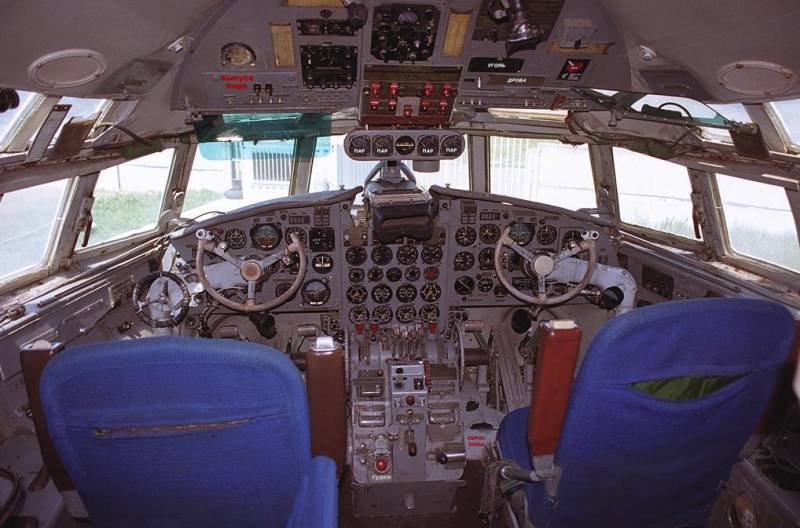 Easy such madness. But when you understand from the story, how much work this couple has already done, naturally, not without the help of other caring people, you realize that this is not a dream, but a very clearly stated task. Which is quite feasible. And you also become infected with the certainty that this is exactly what will happen.

And that in the summer they will bring jacks, lift the plane, roll out the asphalt path so that it can leave this nook and cranny where it can be shown. And talk about him.

And for some reason we decided that the next time, when this door opens before us, there will be a completely different order and order behind it. 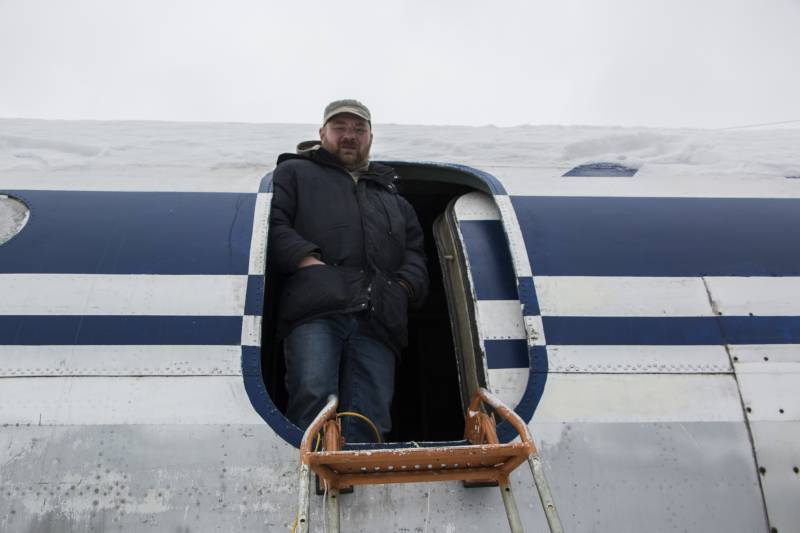 The confidence of the Kudryavtsev comrades is something ... strange and infectious. Confidence of people doing their own hands CASE. I can not believe it.