"He fought like everyone else, just a little luck ..." 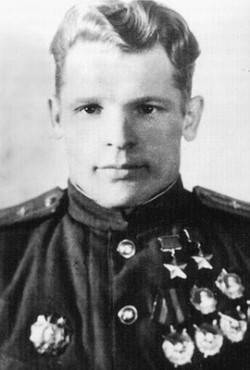 Aleksey Semyonovich Smirnov was born in the revolutionary 1917 year in the village of Paltsevo, Tver Province, in a poor peasant family with seven children. By nationality - Karel. Member of the CPSU (b) with 1941 year. He became famous not in the victorious 1943-1945 years, but in the first period of the war, in the hardest battles against the Luftwaffe, who had not yet lost their strike power ...


July 23, 1942, flying as part of the six to cover troops in the Zemlyansk region, they met six Yu-88s, covered by two Me-109 links. Bombers were already preparing to bring down their cargo on the position of the Soviet troops. Losing no time, Smirnov attacked the leader and knocked him down. Having completed a combat turn, he immediately, from a short distance, shot down one of the cover fighters. Smirnov’s plane was also set on fire in this battle, he left with a parachute and was picked up by a 27th wedge tank brigades. The tankers had previously captured the German pilot from the Me-109 shot down by Smirnov, and they also confirmed the downing of both German aircraft. For this fight, Senior Lieutenant A.S. Smirnov was awarded the Order of Lenin.

Biography ace was normal for that time. He graduated from junior high school, worked as a mechanic at the railway station Kalinin, a fireman on a steam train, worked in the Kalinin aeroclub.

In the Red Army since 1938. In the same year he graduated from the Odessa military aviation school of pilots, and since December - a pilot in the aviation units of the Moscow and then Leningrad military districts.

On the fronts of World War II with 22 June 1941 (Junior Lieutenant) - as a flight commander and deputy squadron commander for 153-IAP on the Leningrad, Volkhov, Voronezh, North-West and Kalinin fronts. From 22 June to 10, March 1943 of the year made 167 combat missions, of which 36 - for attack, 25 - for reconnaissance, the rest - for escorting bombers and covering their troops.

10 July 1941 of the year scored its first victory, knocking down Me-109. In the air battle he was seriously wounded, but managed to bring the plane to his airfield and land it.

From 22 March to 12 June 1942, the regiment pilots mastered the American Aircobra fighter jets received by Lend Lease, and from 29 June 1942, as part of the 244 bomber aviation division (as an escort regiment), began combat work as part of 2-th Air Army on Bryansk, then (from 7 July 1942 of the year) on the Voronezh front.

“The writer's attention was immediately attracted by the colorful figure of the fearless fighter Alexei Smirnov, the glory of which thundered on the whole front,” the Hero of the Soviet Union recalled in his book “Fighting Routes”, and in September 1942 - the commander 1943- Air Army, later Colonel-General of Aviation F.P. Polynin.

Impressed by the meetings with the pilot S.V. Mikhalkov wrote a poem "Smirnovs":

"... In one of the regiments, in a combat squadron,

In the air, from the earthly simplicity and even the shyness of the pilot, there was not a trace left: he became impudent and tenacious, and his attacks and combat techniques were extremely calculating and cunning.

The articles of the pilot, appearing in the army newspaper "Falcon of the Motherland" were collected and published in a small book "The terms of victory", published in Leningrad in 1944 year.

In the summer of 1943, Smirnov specialized in enemy reconnaissance aircraft - EFV-189, personally shooting down 27 July, 8 and 17 in August of these three extremely mannered, successfully armed and armored aircraft, referred to as “frame” in the army, and sometimes because of the frequent presence in the air, the “foreman of the front” ... Our infantrymen especially hated them, the “frames” corrected the enemy fire.

By August 1943, the deputy squadron commander of the guard captain A.S. Smirnov made 312 combat missions, in 39 air battles he shot down 13 enemy aircraft.

In September 1943, the regiment was transferred to the command of the 3 Air Force, operating on the Kalinin Front.

The most successful day for A.S. Smirnov became 9 on October 1943 of the year, when, on three combat missions to the Nevel region, he shot down 4 German planes (Xe-111, Xy-126, 2 FW-190) for which he was awarded the Order of Alexander Nevsky.

By September 1944, Smirnov made 396 combat missions, personally shot down 31 and in the 1 group of the enemy aircraft. Since January, 1945 has fought as deputy commander of the 28 Guards IAP on the 3 Belorussian Front.

Showing high airmanship and creativity in air combat tactics, guard major A.S. During the war years, Smirnov made 457 combat missions on I-153, MiG-3 and Aero Cobra, conducted 72 air battles, shot down 34 of the enemy’s aircraft personally and 1 in the group, besides 27 of June 1943, he destroyed the corrective reconnaissance aerostat against him.

Around 300, he flew combat missions in a pair, and later in the group with his wingman, and later Comé guard Captain PD. Uglyansky, who won the 12 personal and 1 group victory. In aerial combat AS Smirnov was wounded three times. Among shot down A.S. Smirnov 2 two-engined Xe-111 and 1 U-88 airplanes, three in person and one in the group shot down the frame of FV-189, 3 U-87, 2 and Hsh-126 reconnaissance and even extremely rarely identified in the Soviet destruction registries, well-known and well-stocked, well-identified and even extremely seldom identified in the artillery registries, and even extremely seldom identified in the artillery shelves of the well-known reconnaissance personnel Hsh-210 back German heavy twin-engine fighter Me-7. In total on his account XNUMX twin-engine machines.

October 22 The 1944 of the year for the exemplary performance of the tasks of the command of the 28 th Guards Leningrad IAP, where Smirnov fought, was awarded the Order of Kutuzov of the III degree. In total, during the war years, the pilots of the 28-th Guards IAP shot down enemy aircraft and 406 aircraft in air battles at airfields.

After the war, the guard lieutenant colonel A.S. Smirnov commanded a fighter aviation regiment. In 1947, he graduated from the Higher Flight Tactical Training Course for officers. He was one of the pioneers of jet aircraft. From 1950 - Senior Inspector-Pilot on the technique of piloting the Air Force of the Moscow Military District. He mastered the MiG-9, Yak-15, Yak-17, La-15, MiG-15, MiG-17. Military pilot 1 class. From 1952, the Colonel.

Hero of the Soviet Union, the outstanding ace jet aircraft E.G. Pepelyaev, a very zealous in the estimates of flight skills, spoke of him in superlatives: "A very strong pilot: accurate, calm, seasoned."
From 1954, Colonel A.S. Smirnov in stock.

He lived in Moscow. He worked at the school, then at the film studio training films. Sometimes he came to the celebration of Victory Day, sitting somewhere on the side and covering the Golden Stars raised to the lapel of his jacket with his left hand, went unnoticed.

Once, the Marshal of the Aviation A.I., three times Hero of the Soviet Union, who held the ceremonial meeting in DOSAAF Pokryshkin noticed him when the meeting had already begun. Alexander Ivanovich, apologizing, stopped the speaker, invited A.S. Smirnov, on the presidium, briefly introduced him to the audience with a standing ovation, after which he suggested returning to the meeting rules.

Aleksei Semenovich was an extremely modest man, rather even a silent man. "He fought like everyone else, just a little lucky," he answered briefly to inquiries of unfamiliar people and correspondents.

He was married, raised a daughter and son.

Died 7 August 1987 of the year. He was buried in Moscow at the Kuntsevo Cemetery.

A bronze bust of twice Hero of the Soviet Union A.S. Smirnov was installed in the city of Rameshki, Tver Region. One of the MiG-23, which was in service with the Soviet Air Force, was named after him.

Eternal memory to the Hero!