One of the rifles of the Spanish Civil War. "Swan Song" rifle Steyr-Kropachek ... 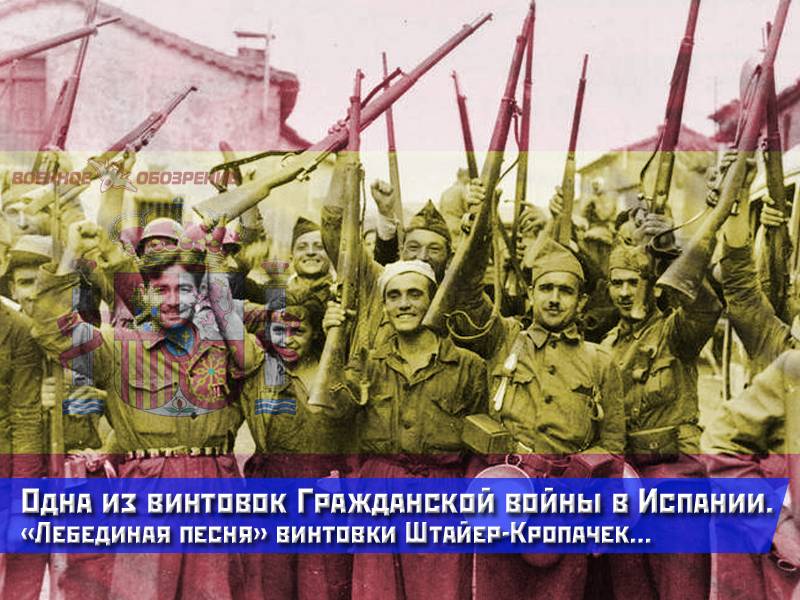 How many of them were exactly - these same foreign rifles that came to Spain from different countries, nobody knows for sure. You can, however, calculate yourself according to Wikipedia and then it turns out that the Spaniards got the 64 system rifles! Only from neighboring France to the Republicans got Chasspo needle rifles of the 1866 model of the year and 11 × 59 caliber with a paper cartridge (interestingly, really, from the warehouses of that time?), Long and also short Graf rifles 1874 / 80 of the same caliber, however already ammunition. Then the French helped the Republicans with Gra-Kropachek 1874 / 78 rifles under the welt cartridge of the 11 × 59 mm R caliber and with a barrel gantry. Then the Graf-Kropachek 1884 rifles of the year got there. And of all the different types of rifles Gras Republicans got 10 000 pieces! Then the republic’s arsenal was replenished with a Kropachek 1885 release of the year with a grenade launcher in the amount of 1700 pieces. 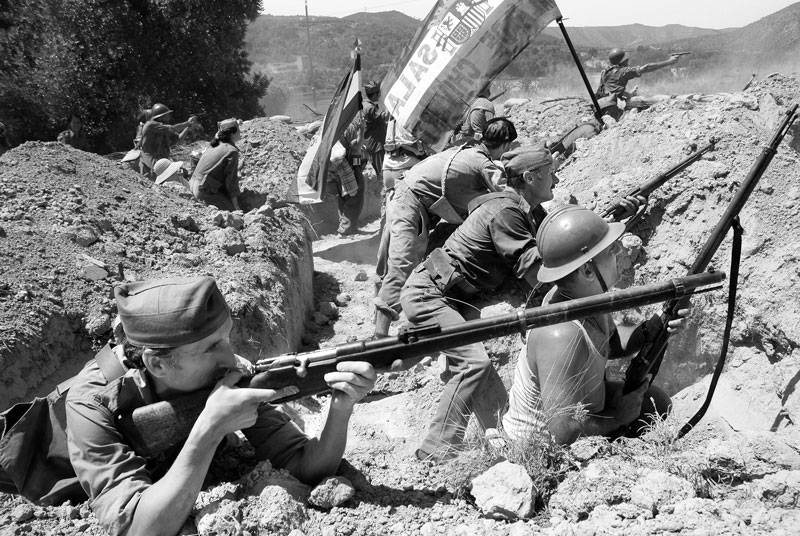 We will begin to consider the rifles used by Republicans from this photo. On it, the Republican fighter is armed, yes, with the German Gewehr 88 rifle, that is, the “commission rifle” with the Mannicher shop. But the second fighter, in a T-shirt and with a helmet on his head, in the hands of a Mosin rifle, is supplied from the USSR. The next, if you look closely, in the hands of the Spanish carbine Type 1 or 2. 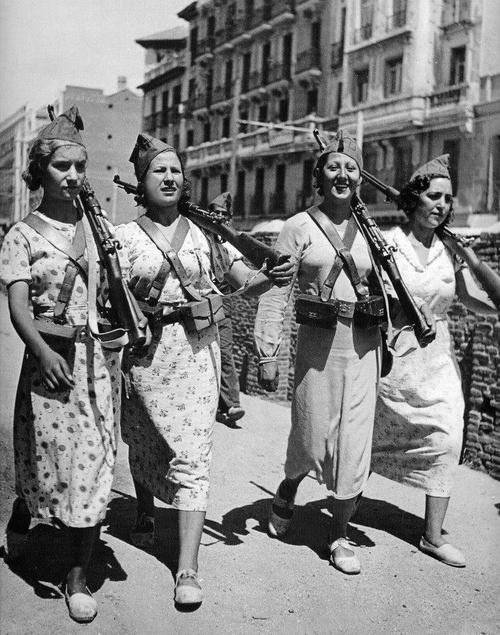 Very revealing photo. Straight shot from a remake of the movie “Rich Bride”: Come on, go, happy friends / The country, like a mother, calls and loves us! / Everywhere need caring hands / And our master's, warm female eye.

Interestingly, all the ladies with the new Mauser German production! And they say, the fronts lacked modern weapons. And that's where it was! 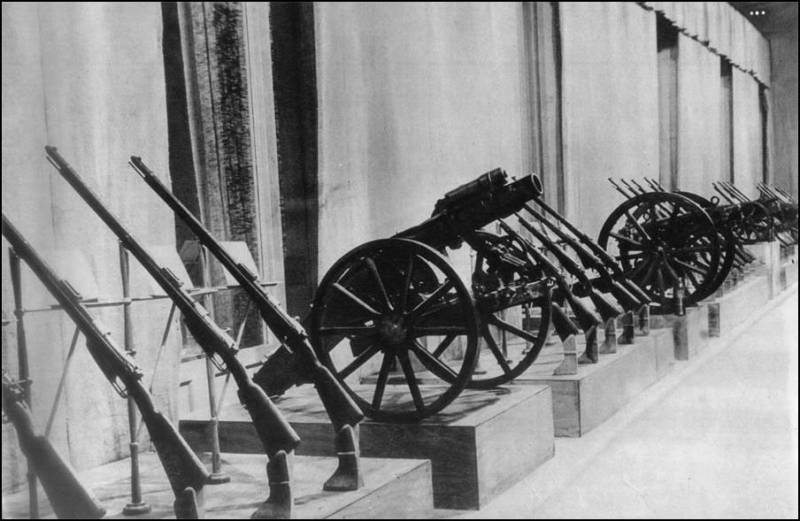 Exhibition of captured weapons taken from the Republicans. Here they are - Gewehr 88 rifles. 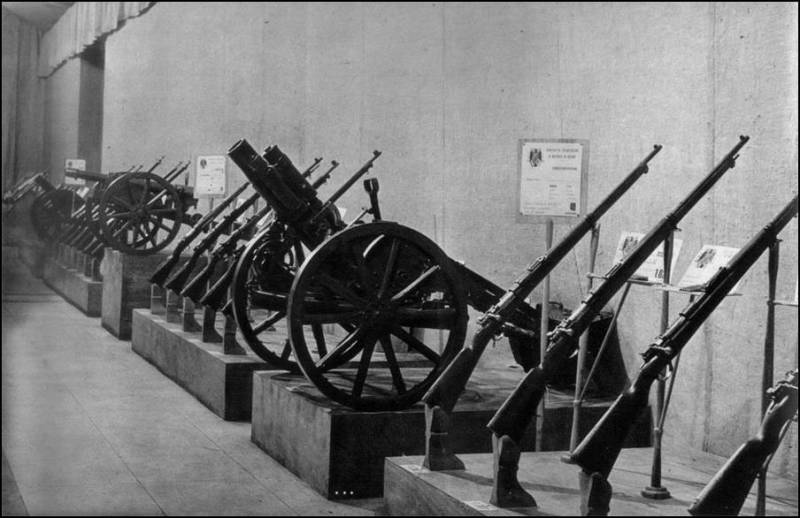 Exhibition of captured weapons taken from the Republicans. Well, this is the Mauser, but during the period of the First World War. 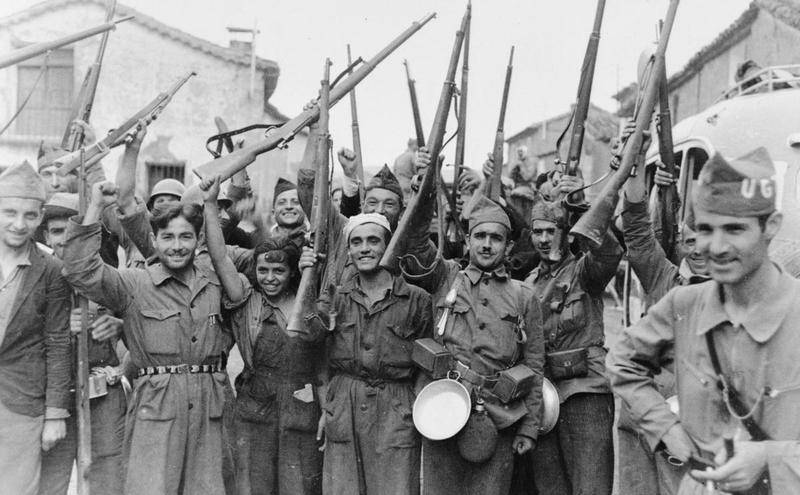 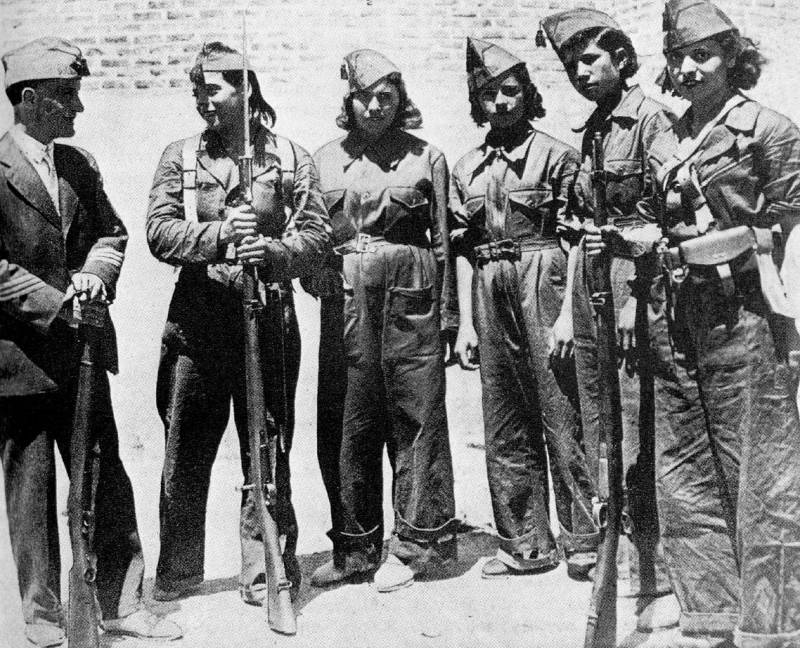 But the Spanish girls with rifles still shoot was clearly more interesting than men. More tellingly, I would say that. Therefore, there are a lot of pictures of them. For example, these ... Spanish girls, pretty girls in large numbers and all with Mauser. Spanish Seen very well! 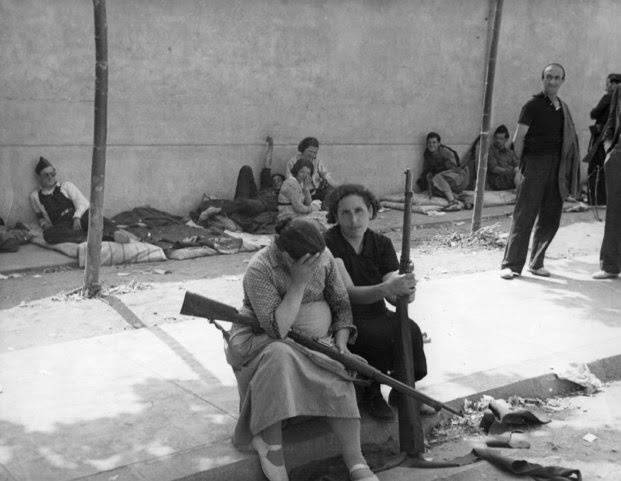 But these Spaniards, I do not like. And they are now exactly the same, as soon as they enter a certain age. Nothing changed. Only these also with rifles! 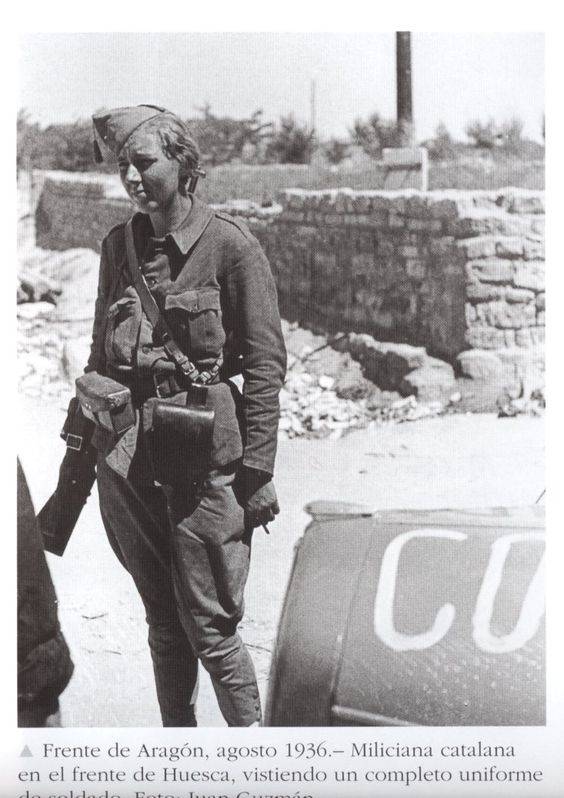 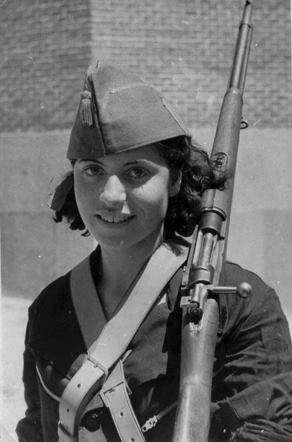 Another Spanish beauty with a Mauser ... 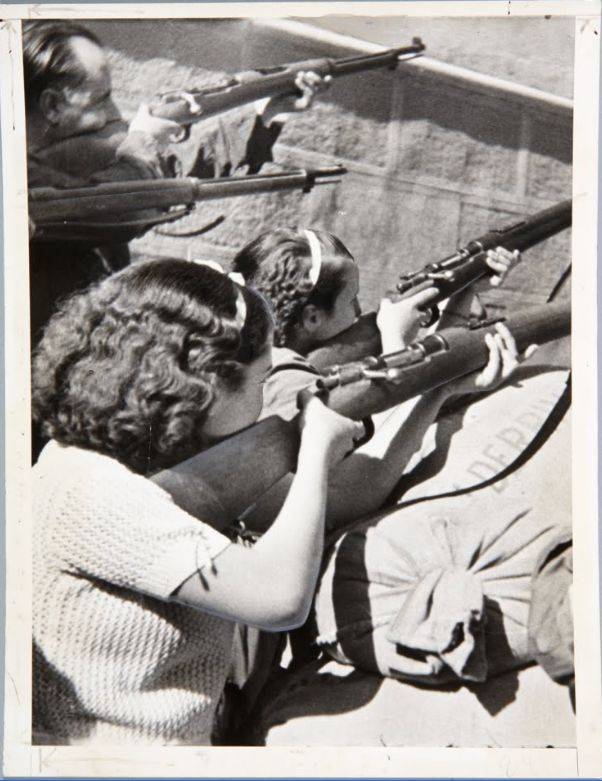 The girl shoots from a carbine "Spanish Mauser" M1916 Type 2. 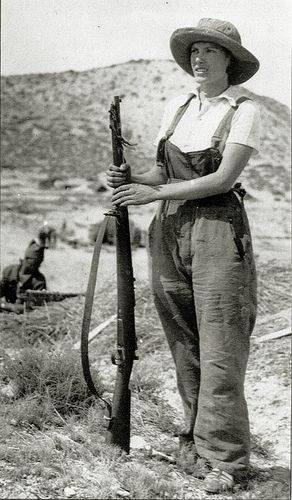 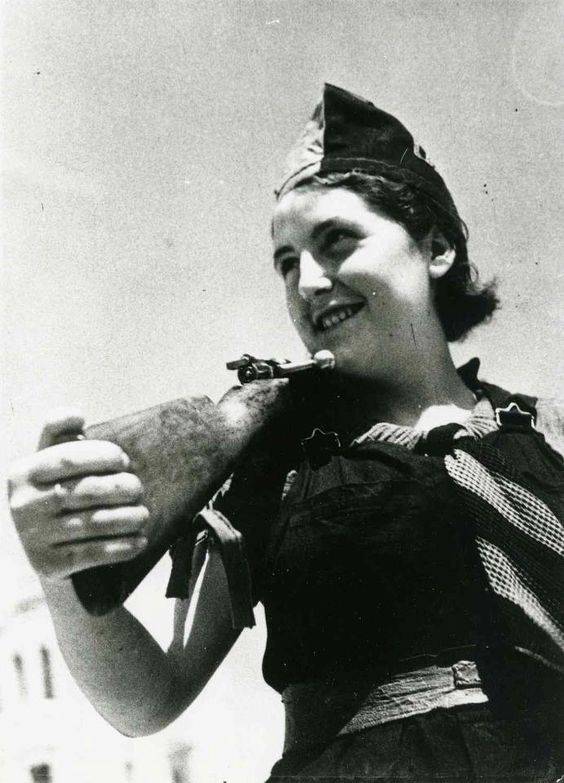 Again a Mauser, but this time in the hands of an anarchist girl — that's such a horror!

How is all this known? Yes, it’s very simple: the winners got not only rifles, Tanks, machine guns and planes, but also archives, and in them heaps of invoices and who, when, where and from whom I received. In 1938, in the city of San Sebastian, nationalists opened a propaganda exhibition of weapons seized from the "Reds" during the war. Based on the materials of the exhibition, a catalog with photographs was prepared. And here's what’s interesting: according to estimates made by the organizers of the exhibition, the cost of all weapons repulsed from the Republicans amounted to 853,054.022 Spanish pesetas or 30,5 million pounds! 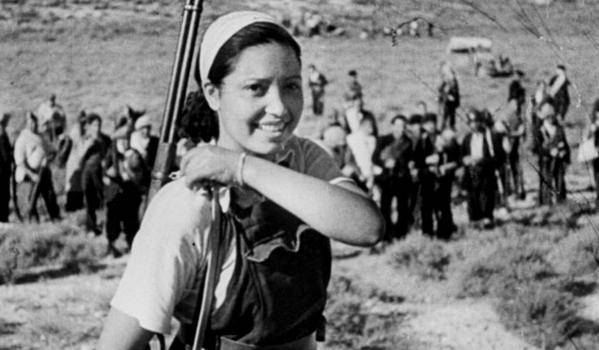 A republican girl with a winchester - this is necessary ... And where did she get it?

Well, and if we turn not to the dry statistics of figures, but look at the live pictures of the period of the Spanish Civil War, then ... what rifles can we see in the hands of her fighters and, first of all, the same Republicans? But it is interesting to see, because people usually take pictures of film and photo documents. Objects related to them, a secondary matter, no one pays attention to them, which means ... they convey what is, or rather what was. But ... so we looked through quite a few photos and did not see either Lebel’s rifles, or Gra ... neither, moreover, did Chausspo. However, not in warehouses, they lay all this time? 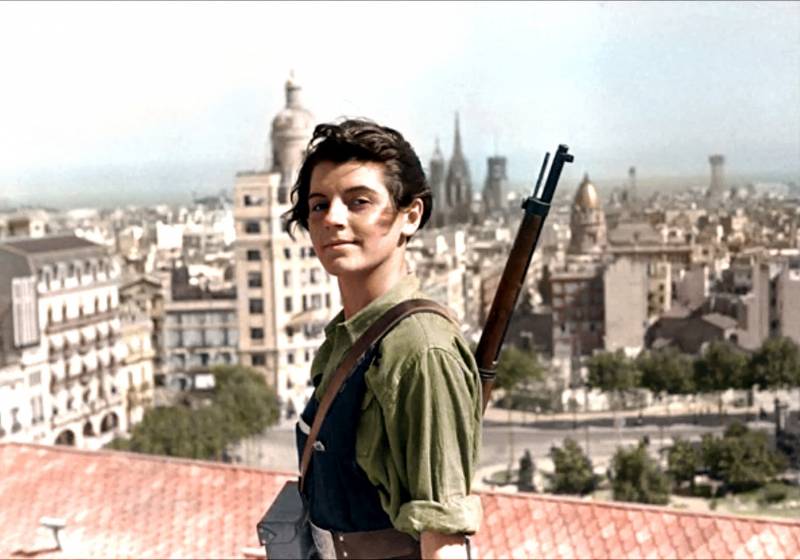 By the way, in fact, in the same Gra rifles almost all the achievements of their time were connected. Cartridge Gra had a brass bottle sleeve with a charge of black powder weighing 5,25 g, the bullet was cast from pure lead and wrapped in a paper wrapper, with which the weight of 25 g was weighed. A protrusion of four parts of wax and one part of ram's fat smeared the bore with each shot. The cartridge primer had a special cap outside; although it was then removed. The bullet developed the initial velocity in 450 m / s. Gra has designed the bolt for his rifle on the model of the 1871 Mauser shutter of the year and improved it in all respects, simplified and strengthened it. The barrel had four rifles and a length of 820 mm. The sight had divisions from 200 to 1800 m. At the same time, the rate of fire of his rifle was higher than that of Mauser, although the barrel locking was as strong as the Paul Mauser rifle! True, many cursed his fuse, but the French did not pay attention to it. That is, if you look at the whole, then the Gra rifle was better than the M1871 Mauser of the year, that’s how! On the model of Gras were converted and Chassopo rifles. Well, then they added to it an under-barrel cylindrical store designed by Austrian major Alfred Kropachek and they ended up with a very good rifle of the 1874 sample - 1878, and then the 1884 sample of the year.

At first, its caliber remained the same - 11-mm, and its sub-barrel magazine contained seven cartridges, one could be on the feeder, and one more in the barrel, so that the total number of charges in it reached nine. The weight of the rifle without ammunition was 4,400 kg. The loading took place through a hole under the barrel, one cartridge each, which took at least 20 seconds. Then all nine rounds could be fired in 18 seconds, but without aiming. The lever of the store switch, so beloved by the military of all countries of the world, was also provided, which locked it “until better times,” so that soldiers without a command would often not burn. 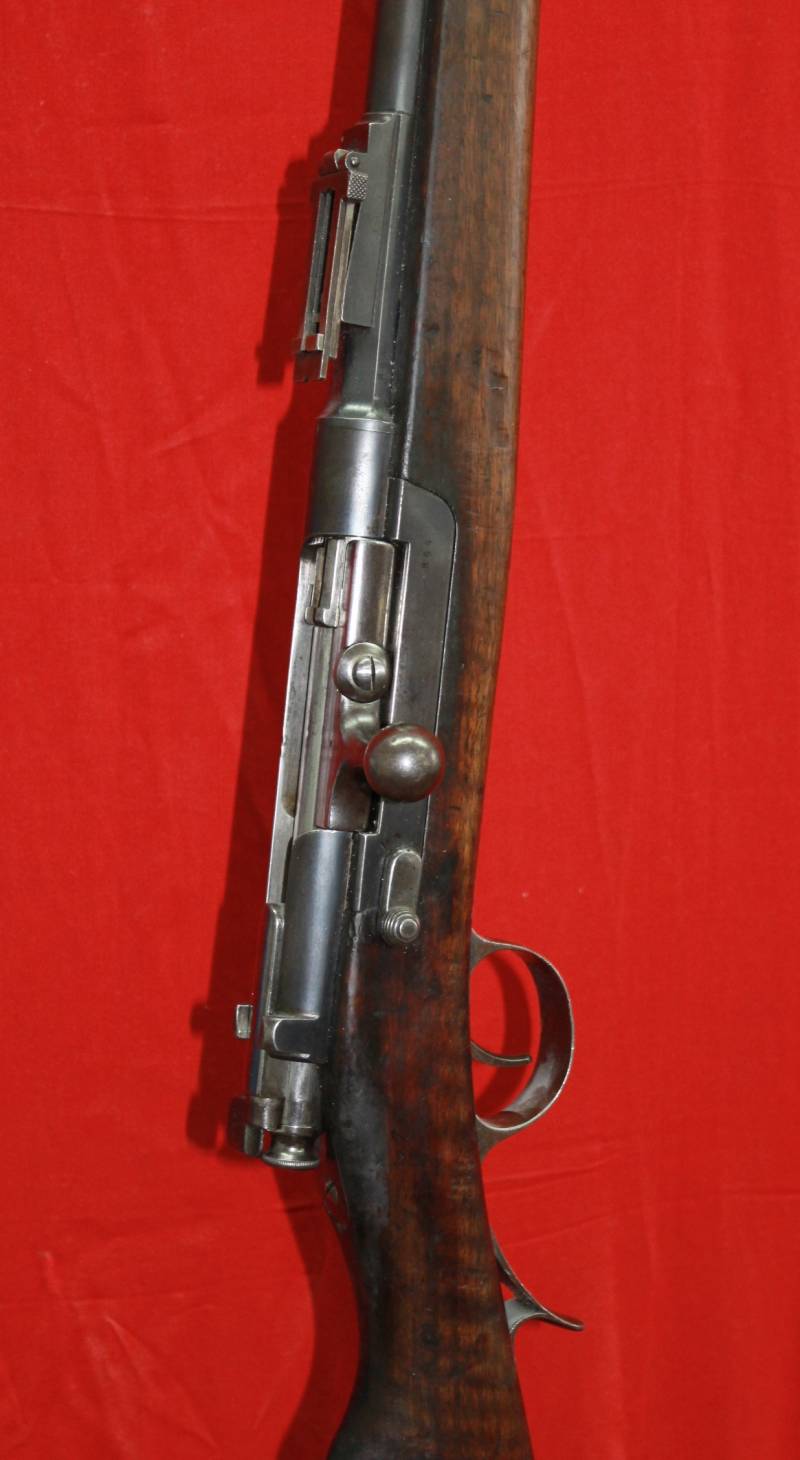 Slide frame rifle M1886 with a shutter. The shutter is closed. 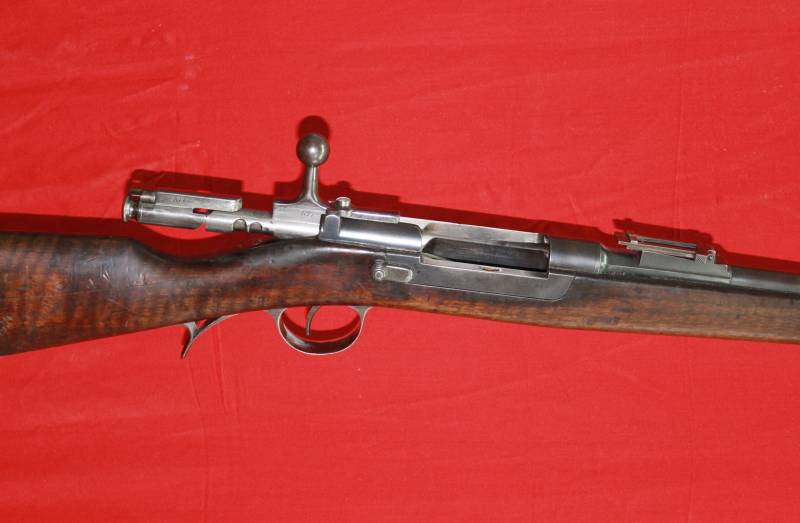 The shutter is open. To disassemble it, a screwdriver was required. 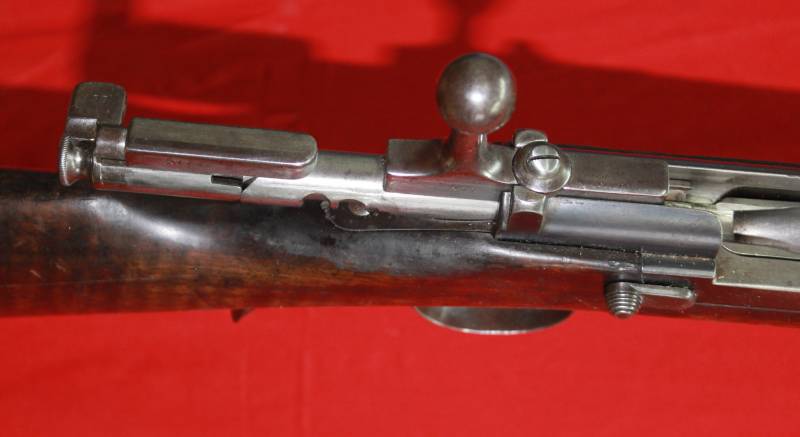 Well, and then, as soon as cartridges appeared under smokeless powder of the caliber 8-mm Lebel, as Kropachek immediately made a rifle of the model 1886 of the year right under them. True, it was only produced for one year at the Steyr factory in Austria, and the entire order went ... to Portugal! Now ten cartridges have been charged into it, and the weight has decreased by 250. 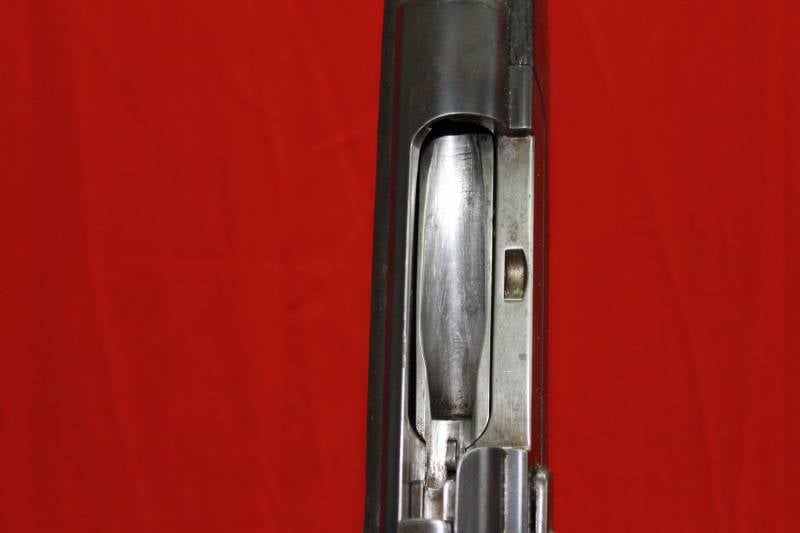 Feeder with a spoon-shaped recess. 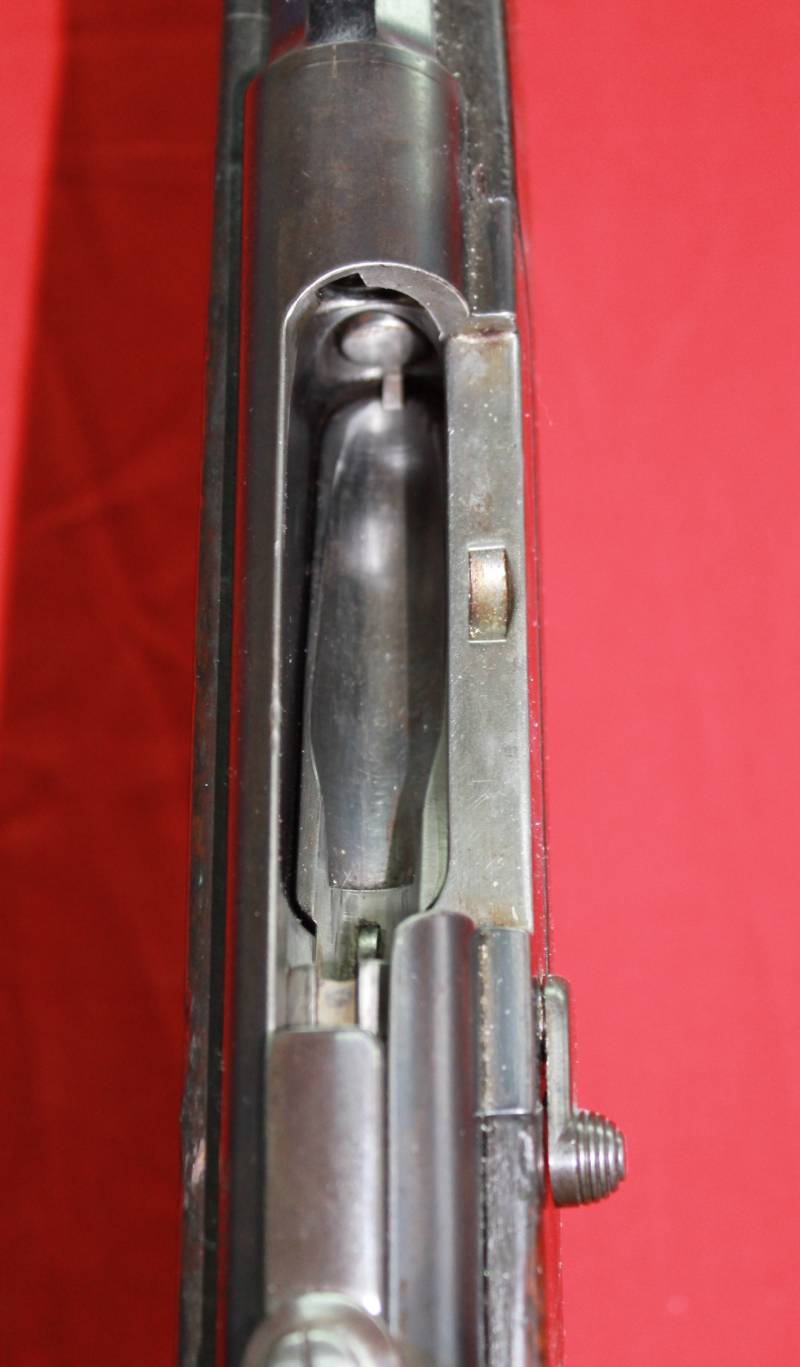 This photo clearly shows the feeder, lowered to the store level, and the cartridges pusher.

So, maybe this rifle on 8-mm cartridges also had a chance to make war in Spain, but ... on the side of the nationalists, who could easily be sold or donated by the Portuguese to the stockpiles of old rifles to arm their African "allies"! After all, if France in such quantities alloyed old rifles to the Republicans, then ... why would not the Portuguese do the same? After all, they have long since replaced their old “styrs” with much more “productive” mausers! But do not disappear the same good ?! So it could well be! 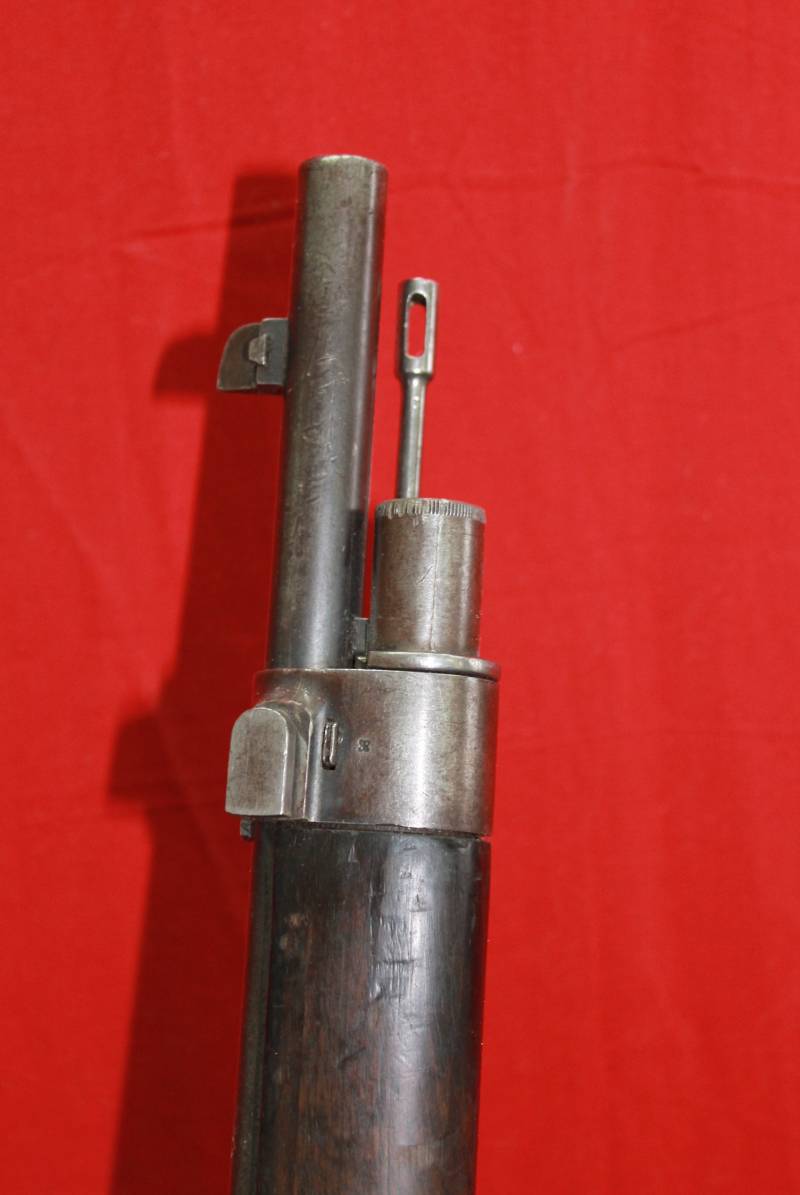 Fly, mount the bayonet and protruding from the lodge shop. The bayonet was mounted horizontally to the right. Why horizontally? And that’s why: for the bayonet to enter the body between the ribs! 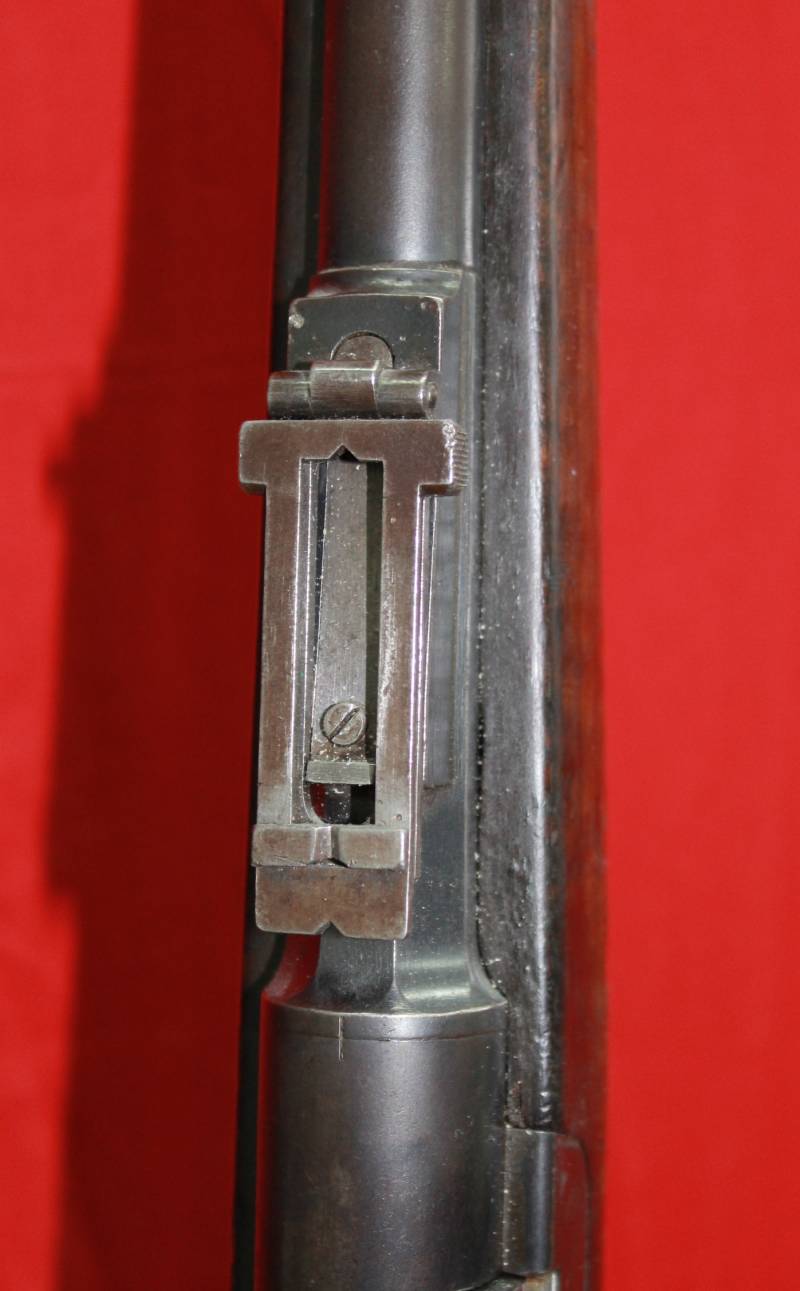 The aiming strip, alas, is not included.

Since the pages of the VO have already been told about this rifle, here it makes sense to cite only those photographs that were absent in the previous material, but they are interesting because they allow us to get a more detailed picture of this interesting piece of weapon thought.

As noted in the previous material, the rifle is convenient to use, and it is surprisingly well in the hands, and does not seem heavy. But the protrusion of the elongated trigger bracket (an attempt to impart a certain “pistoliness” to the straight neck neck), seems to me superfluous. In addition, for example, in a strong cold to touch his bare hand, it must be just unpleasant.

Previous material on the Steyr-Kropachek rifle: “One of the heirs of the Henry rifle ... https://topwar.ru/85966-odna-iz-naslednic-vintovki-genri.html