"Faded away like a lamp, a wonderful genius ..." 180 years from the date of the death of A.S. Pushkin 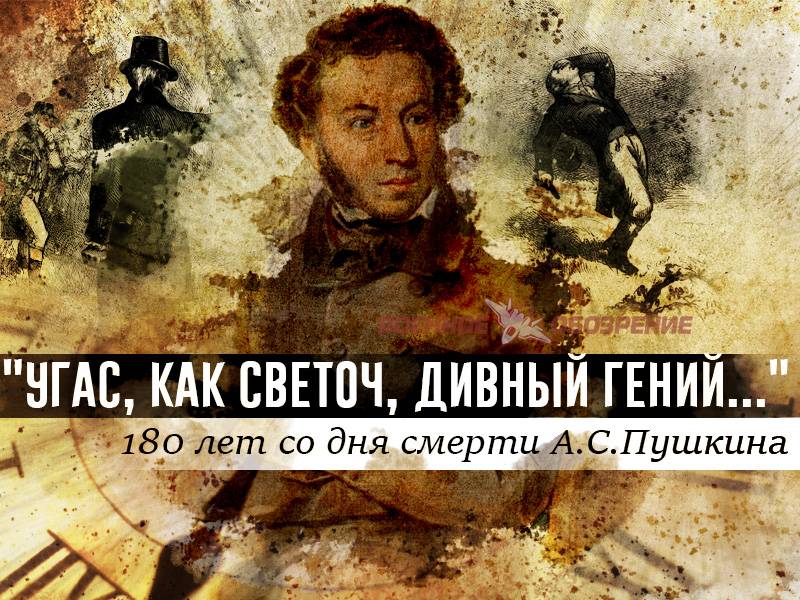 Not a topic for "Military Review"? Objection ... Considering that Pushkin, as the classic used to say, is our everything, we consider it a great sin not to inform our readers that today - February 10 - is a sad date in the Russian stories and culture. 180 years ago did not become a great poet, who for Russia became really more than just a poet, in fact creating a whole literary world, perhaps ahead of its time and setting a real literary fashion for many years to come.

The death of Alexander Sergeevich still remains the subject of quite heated debates between historians and writers, as is the chain of intrigues that led to the fatal shot on the Black River.

Alexander Pushkin died two days after the injury wounded by Georges Charles Dantes. The duel, as is well known, took place on the initiative of the French officer in connection with Pushkin’s letter. The letter was addressed to the Dutch diplomat Baron Louis Gekkern, who is considered to be the adopter of Dantes. Pushkin’s February 1837 sample letter contained mostly statements from 1836, when Pushkin himself summoned Georges Dantes to a duel, but that was canceled due to the marriage of Dantes to the sister of Alexander Pushkin’s wife Ekaterina Goncharova.

If we talk about a brief background, it is that in the year mentioned by 1836, Alexander Pushkin received an epistolary message in which the poet was named the owner of the “patent for the right-handed cuckold”. It was about alleged sympathy for his wife on the part of officer Dantes and the emperor himself. And supposedly Pushkin's wife responded with mutual sympathy. Having carried out the present investigation with the connection of specialists from the printing house, Pushkin came to the conclusion that the authors of the letter were representatives of the Hecker family. Pushkin's friends, in turn, stated that neither Gekkern could be involved in the scandalous letter, and Princes Dolgorukov and Gagarin, with the aim of offending Pushkin's pride. In the end (even after many years - after the graphological examination), it was established that neither Dolgoruky nor Gagarin themselves were not the persons who wrote the letter. By the authorship of the Gekkernov disputes continue to this day.

Considering the fact that Pushkin was sure of the geckery authorship of the “writings” (as he himself spoke about this), in February 1837, he decided to send his letter to the Dutch envoy. In the letter, Pushkin stated that he could not afford to allow Dantes and Gekkern into his own house and did not consider them to be relatives even after legalizing Georges' marriage with Catherine (Goncharova). As an argument for the “weaning” of the Gekkerns from his home, Pushkin writes that he cannot let a man into his door who is “sick with syphilis”. At the same time, Pushkin himself was well aware that the matter was again going to a duel.

At that time, the duels were inextricably linked with both the fate of Pushkin and his work - both in poetry and in prose. True, the overwhelming majority of duels (whether Pushkin himself or someone else initiated them) were canceled - either on the basis of, as they were said, reconciliation of the parties, or for other reasons (including orders from supervisory authorities). Many were canceled, but this was not canceled. Dantes called Pushkin. Shot first. Pushkin had to make a return shot already lying in the snow in the blood. At the same time, the biographers of Alexander Sergeevich note that Pushkin’s pistol was clogged with snow, and Dantes, together with his second, an employee of the French embassy, ​​Laurent D'Archiac, forbade changing weapon. According to others, Pushkin still got another gun, eventually wounding Dantes in the arm.

After the command of Dantes and the state authorities became aware of the duel and the death of Alexander Pushkin in it, a decision was made on criminal prosecution. The initial sentence was harsh: the death penalty for all participants in the duel with the exception of the second Georges Dantes of the Viscount D'Archiac (he had diplomatic immunity). It was noted that “the criminal act of Pushkin’s junior chamber (...) on the occasion of his death should be brought to oblivion”. 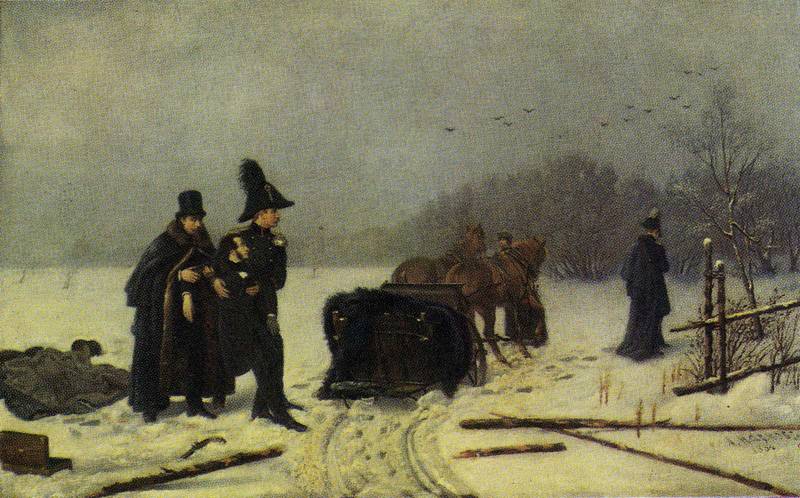 After some time, the sentence was more than mitigated: Georges Dantes was deprived of the officer's rank in Russia and expelled from the country. D'Arshiak also left the Russian Empire. Pushkin’s Danzas second, arrested for two months and discharged from military service, was then released and reinstated.

A separate group of historians believe that for the state institutions of that time and the death of Alexander Pushkin, and the influence of the Russian authorities on Dantes, who ended up abroad, had their fruits. In particular, there is a version that Dantes in the future became one of the regular informants of the embassy of the Russian Empire in Paris, moreover as a kind of enforced measure for the fact that he was freed from the gallows. In particular, one of the most important reports of the “late” Dantes is considered to be the message about the impending assassination attempt on the Russian emperor Alexander II. The report was received through Swiss informed circles literally one day before the March 1 terrorist act of March (new style) 1881. No security measures were taken after the announcement in St. Petersburg. Informed by the Russian embassy in Paris Dantes, as historians believe, in earlier years.

10 February Alexander Pushkin's 1837 is gone. The loss for Russian literature and culture in general was enormous. And at the same time, Alexander Pushkin left a truly unique legacy, in fact creating a modern Russian language and inspiring dozens of eminent poets and writers, and not only the XIX century, to work. Until now, Pushkin's literary treasure remains a truly inexhaustible wealth of Russia and the whole world.