Perekop and Yushun. Some features of the Crimean operation 7 - 17 November 1920.

February 16 2017
130
The defense system of the Perekop bridgehead consisted of two fortified areas, where part of the Russian army of P. N. Wrangel took up positions.


Perekop fortified area was a fortified strip of three lines of defense. The main line of defense was the Perekop shaft, called the Turkish - this is an ancient fortification of length 9 km, was interrupted near the city of Perekop, where a stone fortification was erected.

Two other lines of defense were located north of the Turkish shaft, covered Perekop from the north, and stretched to the northeast direction, resting on Sivash Bay. The flanks of the fortifications were covered by the Gulf of Perekop and Sivash.

The second, the Yushunskiy fortified area, was a second lane of fortifications and consisted of four defensive lines, surrounded by wire barriers, interrupting the isthmuses formed by the lakes and Sivash. Along the bank of the Sivash rifle trenches, rested against the Taganash fortified hub, consisting of two defensive lines.

On the Perekop Isthmus, parts of the Russian army concentrated a large number of machine guns, light and heavy artillery, which was strengthened by the installation of new guns removed from the Sevastopol forts and ships of the Black Sea fleet.

But the Sivash in the north-western part was almost dry, and its hardened frost was a hard ground, convenient for forcing the bay not only with infantry, but also with artillery. The only obstacle to the forcing of the bay by the Soviet troops was the east wind, driving the water from the Sea of ​​Azov - and the water flooded the dry bottom.

The 1920 pulled up to the beginning of November to the isthmus of the part of the Soviet 6 army were concentrated as follows.

The combat composition of the army units intended for assault on the positions of the white troops (minus the 1 th rifle division guarding the Black Sea coast) was 27,5 thousand bayonets and 2,7 thousand sabers.

The Perekop site was defended by the following troops of the Russian army: Perekop shaft — by units of the 13 Infantry Division; The Lithuanian Peninsula is part of the 1 Brigade of the 2 Kuban Division and the Combined Guards Regiment, and the 34 I Infantry Division was in reserve in the area of ​​Armyansk. Combat composition of the white group - 2,2 ths. Bayonets and 720 sabers.

From November 1 to November 7, the Reds conducted systematic preparations for the assault of fortifications; they searched for fords through the Sivash, pulled up artillery, carried out engineering work on equipping infantry positions and destroying enemy wire barriers.

The 6 th army, reinforced by the 2 th Mounted and Rebel armies, was instructed to cross the Vladimirovka-Stroganovka-Kurgan sector to strike at the rear of the Perekop positions, simultaneously storming them from the front. N.I. Makhno ordered the rebel army to be immediately transported to the Kurgan-Kat metro station and thrown into the rear of the Perekop positions in the direction of Durmen.

The 6 Army Divisions were assigned the following tasks:

52 is to strike in the direction of the Lithuanian Peninsula and further south.

15 - to interact with the Rebel Army and secure the Lithuanian Peninsula.

The Latvian Rifle Division and the 2 Cavalry Army are in reserve.

The start of the general offensive is 7 November.

Considering the fact that the 13-i and 34-i infantry divisions, having suffered heavy losses in previous battles, were numerically weak, the white command of 5 - 6 November began to regroup parts, according to which the 2-i army corps was replaced by parts of 1-th ( Markovskaya, Kornilovskaya and Drozdovskaya shock divisions) and was assigned to the rear for reorganization. Parts of the 1 Corps were reinforced by parts of the cadet schools and had the Equestrian Corps of IG Barbovich in the right flank as part of the 1 and 2 cavalry divisions and the Terek-Astrakhan brigade. These were tested, strong and resistant parts, welded by a long joint struggle. The combat strength of the defending units increased markedly. But the command of the Russian army with regrouping was late: only 8 on November, already in the course of the fighting, units of the 1 army corps arrived in the Perekop district and began changing units of the 2 corps, leaving units of the Markov division in the st. Dzhankoy. The Drozdov Division was supposed to change parts of the 13 Infantry Division on the Turkish shaft, and the Kornilov division would take up positions east of Armyansk. But since the Kornilov division was late, and the red divisions had already occupied the Lithuanian peninsula, knocking out units of the 1 brigade of the 2 of the Kuban division and the Combined Guards regiment, the command of the Drozdov division was forced to leave two regiments on the Turkish shaft, and the other two to throw for parry hitting the red in the area of ​​the Lithuanian Peninsula.

In 22 hours of November 5, the Rebel Army began to force the Sivash, but not even half, the Makhnovists returned, citing the fact that the wind drove a lot of water and the Sivash was allegedly impassable.

In 22 hours of November 7, the active phase of the operation began - units of the 52 and 15 divisions began to force the Sivash. Forward for cutting the wire were thrust shock groups of communists, assault teams and demolition men.

Thanks to the spotlights, the defenders discovered the Reds, opening deadly artillery and machine-gun fire at them. Having suffered heavy losses, by the 2 hours of November 8, the Soviet units approached the wire barriers located in the 100-150 steps from the Lithuanian Peninsula, and by the 7 hours, parts of the 15 and 52 divisions broke through the fortified strip and captured white positions.

At the same time, the 153 Brigade of the 51 Division passed the bay and launched an offensive in the direction of Karadzhanai.

At dawn of November 8, the right-flank units of the 51 division located in front of Perekop shaft started the destruction of the wire barriers. Demovers, suffering heavy losses, did their work.

The first attacks of the fortifications of the Turkish Hall began from 10 hours.
By the same time, units of the 15 and 52 divisions occupied the Lithuanian Peninsula. White began to retreat beyond his first fortified line.

In this area, the white command was put into battle, except for the brigade of the Kuban division and the Combined Guards regiment, parts of the 34 and 13 th infantry divisions that had not yet managed to withdraw to the rear.

Around 14, the 152 and Fire Brigade divisions, despite the hurricane fire of the defenders and the heavy losses, approached the shaft at a distance of 100 steps. Before the chains of the red infantry was the third line of wire obstacles and a moat, entangled in barbed wire. The demolition men moved forward again. Now White could fire at the attackers not only with machine-gun and artillery fire, but also with bombard bomb and mortar fire, and throw hand grenades at them.

By the end of the day, the Soviet units, coming up on the 50 steps to the shaft, were forced to withdraw to their original position.

By the end of the day, the whites pressed the Soviet units in the area of ​​the Lithuanian Peninsula. On the 153-th and 154-brigade were thrown strong parts, reinforced armored vehicles, but with the support of the reserves retained red.

Bypassed from the east and fearing to be finally cut off, from the evening of November 8, November 10, they began to withdraw their units from the Perekop shaft to the Yushun positions.

In the afternoon of November 9, all Soviet divisions launched an offensive against the Yushun positions.

The command of the Russian army, deciding to snatch the initiative from the hands of his opponent, struck a counterstrike. On the night of 9 November, pulling IG Barbovich's equestrian corps to the Nameless Lake (up to 4,5 thousand sabers with 30 guns, 4 armored cars and 150 machine guns), it struck the left flank of 15- th division, capturing fortified positions on the southern bank of the Sivash. But with the reserve approach, the further advancement of the white cavalry was halted.

Trying to get to the rear of the 15 Division, around 15-o'clock, the equestrian group, supported by armored vehicles, was again thrown to the left flank of this compound - and it managed to break through to the Sivash section - Lake Bezymyannoe. Parts of the Soviet division began to retreat, but the machine-gun regiment of the Rebel Army, redeployed to the breakout area in time, restored the situation with dagger-gun fire. The key role played Makhnov machine gun carts.

Having mastered the whole Perekopskiy fortified area, by the evening of November 10, Soviet units were located in front of the Yushun positions.
The Latvian Rifle Division was introduced into the battle.

Dawn 10 November began with the onset of the whites - they again attacked the left flank of the Reds and again pressed it.

Parts of the 51 Division (152 and Fire Brigade), which occupied the Yushun positions by this time, were moved eastward to strike the rear of the white units. A bypass maneuver saved the left flank of the Soviet grouping - fearing to be cut off, whites stopped further advancement and began to retreat in the southern and southeast directions. On the shoulders of the enemy, the Soviet units captured the last fortifications of the whites and rushed to the Crimea in a rush.

The main reasons for the quick success of the Soviet troops during the Crimean operation were the following: a) the suddenness of an assault on defensive positions; b) successful use of bypass maneuvers; c) the lack of reliable large reserves by the white command (the offensive found the command of the Russian army at the stage of re-formation of a number of formations, which greatly facilitated the task of the coming); d) the small number of parts of the defender; e) the delayed replacement of the weak parts of the 13 and 34 infantry divisions of the Russian army with resistant shock units of the 1 army corps; f) The specificity of the Perekop isthmus — the white cavalry, initially numerically superior to the red one, could not turn around for a strike and, if it managed to make a breakthrough, then it fell into the rear of the red parts and ran across large reserves.

All these circumstances were of key importance at the final stage of the Civil War in southern Russia - during the Battle of the Crimea. 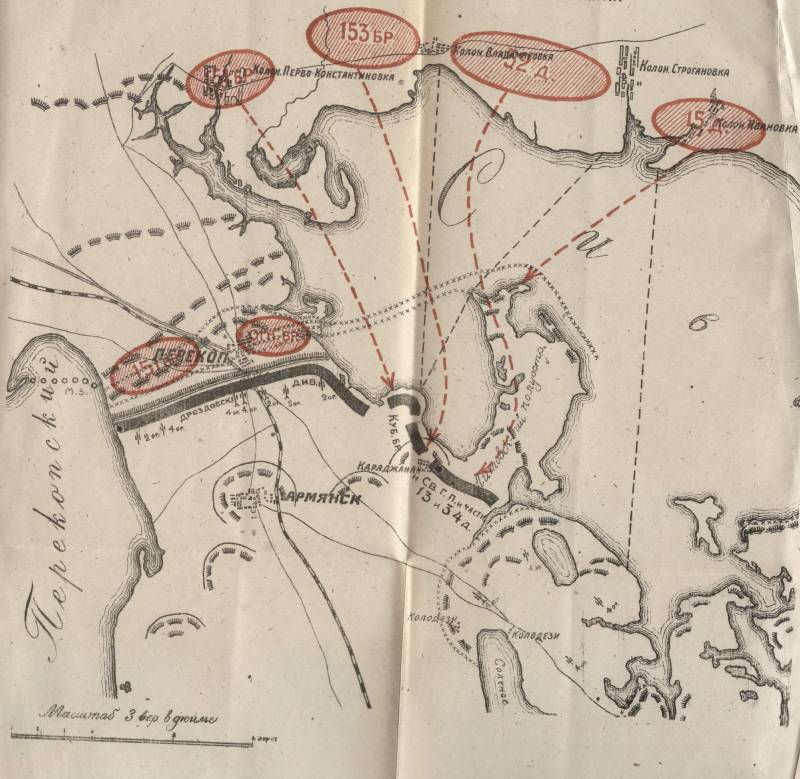 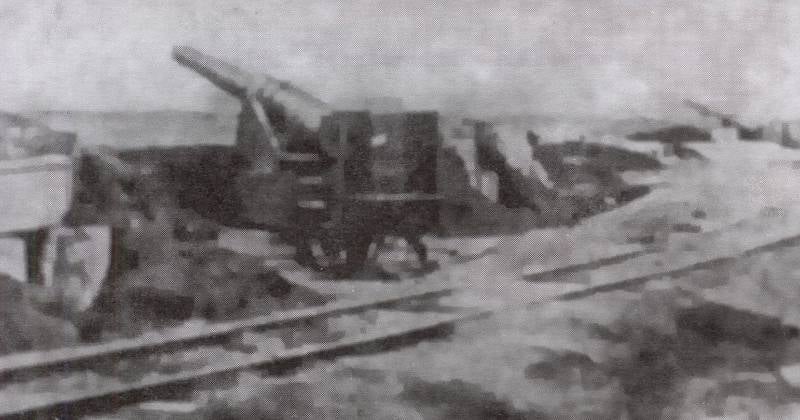 naval guns at the position at Art. Taganash.