Battleship from the country of trolls 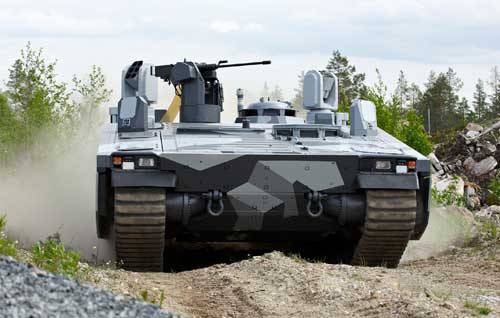 In Sweden, took into account the experience of using armored vehicles in Afghanistan


The directions of modernization of armored vehicles in all countries are developed today, based on the experience of local wars and military conflicts. It was with the lessons of the US and NATO troops fighting in Iraq and Afghanistan that the Swedish BMP CV90 was updated. Its latest version, also first demonstrated at Eurosatory-2010, is called Armardillo.

The Stridsforclon 90 infantry fighting vehicle, better known as CV90, created by Hägglunds in the second half of 80, became one of the most sophisticated BMP models and was rather widely exported - mainly to the states of Northern Europe. In addition to Sweden, CV90 was ordered for Switzerland, the Netherlands, Norway, Finland and Denmark for their armies. Currently sold and concluded contracts for the supply of more than 1100 of these machines. 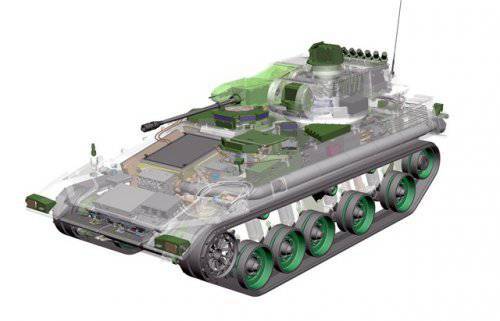 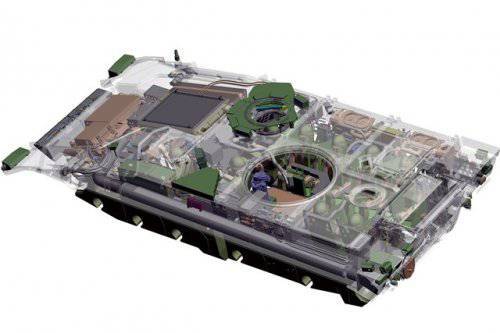 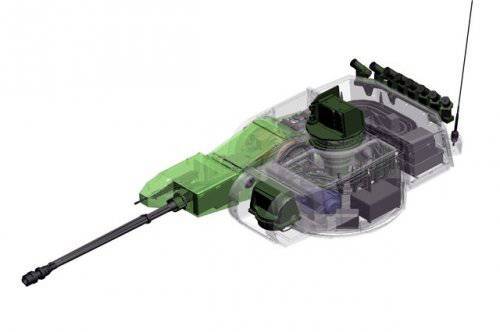 The distinctive features of the base version CV90, designed for the Swedish army, can be called powerful weapons, consisting of 40-mm automatic cannon, a basic high level of crew and landing protection, good maneuverability. The BMP is exported with 30-mm (Norway, Switzerland, Finland) and 35-mm (Netherlands, Denmark) guns.

The basic reservation level provides all-round protection against bullets with a caliber of 14,5 mm, additional ceramic screens allow the front projection of the machine to withstand automatic cannon fire, including shelling of 30-mm sabot projectiles. 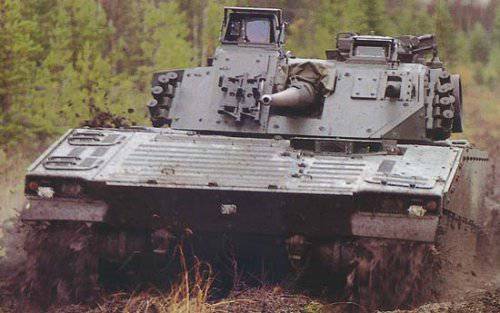 At the same time, the CV90, especially in the CV90-40 modification with the 40-mm gun, located in a two-seat tower, has a rather high contour: its height is 2,7 m (for comparison: the height of the Russian BMP-3 is equal to 2,3 m, and the BMP-2 is and the one below). In addition, the car, as, indeed, all samples of European military equipment, turned out to be quite expensive: the average cost of one CV90 ranges from three to four million euros.

The CV90 has a classic layout for infantry fighting vehicles with a front engine-transmission compartment and a control compartment and a rear landing section. There are various modifications of this infantry fighting vehicle - on its basis the commander and reconnaissance vehicles, self-propelled anti-aircraft guns, as well as light Tanks with 105 mm and 120 mm guns. The latter, however, have not yet found buyers.

If it were not for 11 of September of 2001 of the year, we probably would never have known what the true capabilities of CV90 are in the real theater of military operations. Indeed, with the exception of Finland, the rest of the operators of this BMP in the twentieth century proved to be purely peaceful countries that had minimal and unsuccessful combat experience or adhered to lasting neutrality. No prerequisites for changing the situation in the new century were seen before the start of the American operation in Afghanistan, which led to the involvement of Washington’s allies, primarily from the North Atlantic Alliance. As a result, the Swedish car still had to make war. 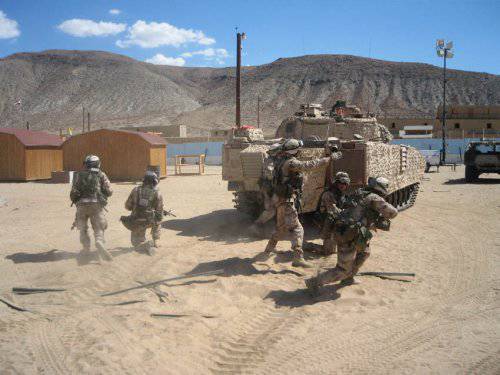 The Norwegian and Danish CV90 took part in the Afghan campaign. They did not suffer irretrievable losses, although in January 2010, a Norwegian soldier, a driver driver, was killed during a blast on a makeshift bomb. And in April, two Danish cars hit a 2010. Among the crew members and the assault force there were no dead or wounded. Each BMP torn off a pair of rollers. 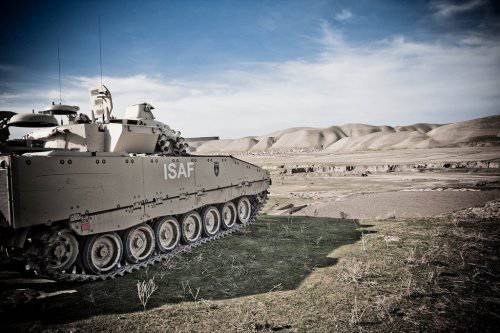 From this combat experience, however, rather limited, the engineers of BAE Systems, under whose control Hägglunds took over in 2004, made their findings and presented the CV2010 Armardillo BMP at Eurosatory-90. 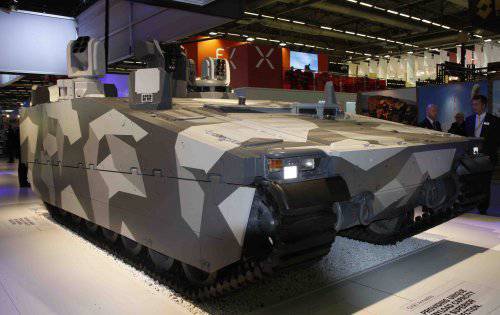 Armardillo has a common body, power unit and chassis with the CV90. The main external difference of the modernized Swedish BMP was the absence of a large and heavy twin-turret, and at the same time an automatic cannon. Instead, Armardillo received a remote-controlled Lemur RWS combat module with an 12,7-mm M2 machine gun. This solution, according to representatives of the company BAE Systems, has reduced the weight of the machine and free up space for additional equipment. The mass of the BMP in this version is 26 tons, and since the transmission and chassis can withstand loads of up to 35 tons, a reserve of 9 tons is obtained. It is designed to further enhance protection, which is already increased compared to the base case. 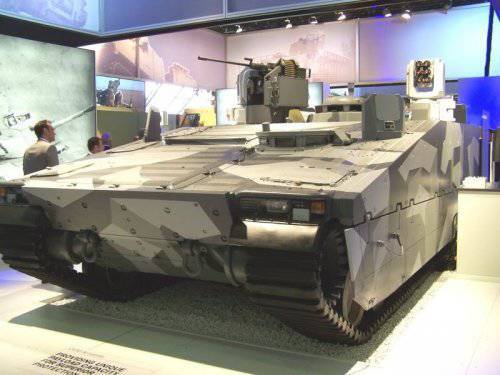 As for the markedly reduced fire capabilities of the BMP, then, according to the engineers of BAE Systems, they are unnecessary in the base case. The judgment is rather strange: apparently, soldiers from the Norwegian and Danish contingents of the International Security Assistance Force in Afghanistan (ISAF) did not have to be ambushed in narrow mountain gorges or in villages with their duoles comparable in strength to concrete. In any case, a similar experience of the Soviet troops at the beginning of the 80-s led to the rapid replacement of the BMP-1 with its virtually useless 73-mm smooth-bore gun on the BMN-2 equipped with an 30-mm automatic weapon in counter-guerrilla actions. In fairness, however, it should be noted that the Lemur RWS module provides for the installation of other weapons: 40-mm automatic grenade launcher or 25-mm M242 Bushmaster cannon - the main for light American armored vehicles.

When designing the CV90 Armardillo, serious attention was paid to increasing its fire protection from infantry weapons, including anti-tank weapons, and resistance to undermining on mines and improvised land mines.

The latter property is achieved by making the bottom of the case of non-hardened steel with a minimum number of welds - this solution was recognized as the most effective for machines with a flat bottom. According to the developers, in the form shown on Eurosatory-2010, Armardillo ensures the safety of people inside when it explodes with a power of up to 10 kg of TNT.

Regarding the extent of the reservation, BAE Systems did not provide complete data on this indicator of the new BMP. An employee of the company only reported that the armored case, in combination with mounted ceramic modules, provides protection that surely exceeds the 5 level according to the STANAG 4569 standard, which preserves the integrity of the case when an 25-mm snapping projectile hits from a distance of 500 m and no closer than the 155-mm CFC. 25 m from the car.

A very important element in the construction of the Swedish BMP is the Saab LEDS150 active defense system, which allows to intercept and destroy shots from grenade launchers and anti-tank systems at a distance of 5-15. LEDS150 has not yet been purchased by any army in the world, although, according to some sources, has been chosen by India for equipping Russian tanks T-90. CV90 Armardillo is also equipped with a new fire extinguishing system, designed to prevent the destruction of infantry fighting vehicles in the event that they are bombarded with Molotov cocktails.

Armardillo has a modular design, which allows to build on the basic chassis sanitary, command, reconnaissance vehicles, self-propelled mortars, BREM. At the same time, the level of unification of construction details is from 65 to 88%. 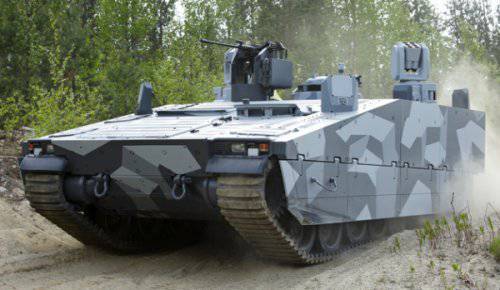 An interesting feature of the Swedish BMP - it is the only one in its class, equipped with solid rubber tracks on the steel cord. The advantage of these tracks is that they are lighter, not so noisy, they damage the road less and, as the developers claim, have better cross-country ability in the snow. However, the only place where Armardillo can be used with such a driver without any problems is the native peaceful Sweden. During the war, trucks are one of the most vulnerable parts of tracked vehicles. Combat damage to the rubber band will require its replacement as a whole, and the crew will not be able to do it on their own. In addition, the Russian and American experience shows that in the conditions of Afghan off-road with its rocky mountain roads, BTR tires wear out very quickly. The same perspective, obviously, will be expected and all-rubber caterpillars.

Potential customers of Armardillo at BAE Systems, which is logical, are those countries whose armies already have CV90 in service. In addition, Canada, Norway and Poland who have shown interest in the basic version of this BMP can also become buyers of the car. According to experts, despite its cost, CV90 (and hence its new modification) remains a serious offer on the market for light armored vehicles. However, in all likelihood, Armardillo is unlikely to include states located outside Europe and North America.