Spiders in the bank 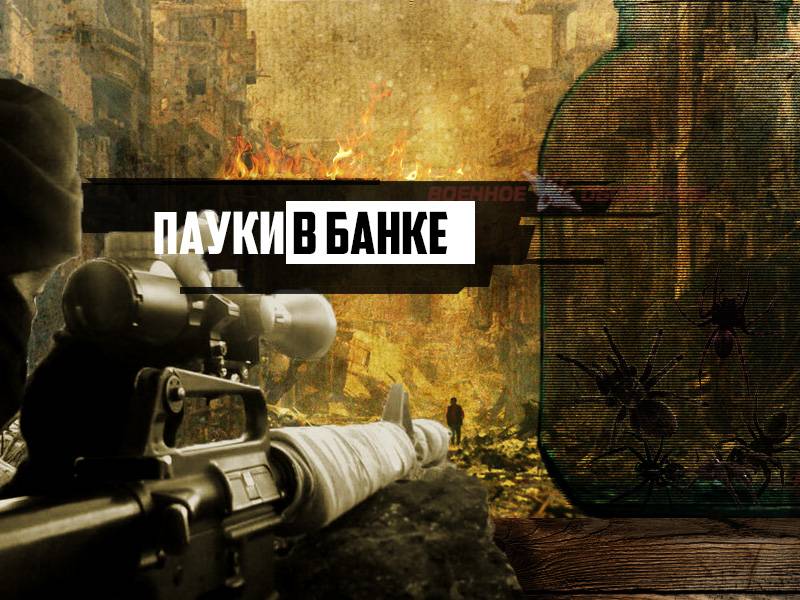 In the Syrian province of Idlib, heterogeneous militant groups destroy each other without mercy. Islamists devour other Islamists like spiders in a bank. 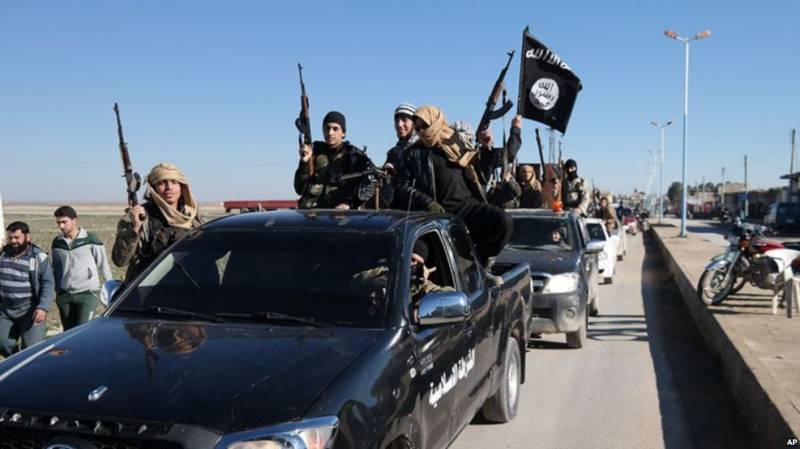 Recall earlier "moderate" militants were collectively taken by bus in accordance with the agreement with Damascus from Ain al-Fiji to Idlib. Dispatch was called "evacuation". This was reported by the source at the end of January. Federal news agency.

In addition, we add, other militants appeared in Idlib after the defeat in Aleppo.

A few days earlier the TV channel "RT" reported on the beginning of the Islamist confrontation in the province of Idlib.

It was indicated that several groups of the "opposition" entered into armed confrontation. Rocket launchers, large-caliber mortars and machine guns are used. The parties suffer losses.

Until now, these groups have fought together against government forces. The current situation of armed confrontation is associated with the loss of a common enemy, as well as the emergence of political differences between the factions.

On the continuation of differences and hostilities between Islamist groups wrote 6 February newspaper "News".

Here is a short summary of the internecine war.

On January 30 and 31, heavy weapons clashed near the provincial capital. Jihadists hit the “moderate” grouping “Jaysh al-Mujahidin” (its representatives were guilty of sending representatives to the negotiations in Astana).

There are no front lines in Idlib, fighting is sporadic. Opponents raids are sudden: attacks on strongholds and roadblocks are interspersed with ambushes and murders of warlords. According to some estimates, the total losses of the militants exceeded one hundred people.

According to Izvestia, the warring Islamist groups in the past were the main shock force of the "opposition". “Khayat Tahrir al-Sham” was joined by up to sixteen groups, and twelve formations joined the ranks of “Ahrar al-Sham”, as well as the SSA detachments with it. Kurdish sources believe that the forces of the opponents are approximately equal: each “coalition” of Islamists has about twenty thousand fighters.

Leonid Isaev, an orientalist from the Higher School of Economics, said in an interview with Izvestia that the Ahrar ash-Sham coalition and the SSA coalition are stronger than the former Nusra, but she cannot count on a quick victory.

“The tripartite negotiations (Russia - Iran - Turkey) led to the fact that the pro-Turkish groups in Idlib, primarily the SSA, came out against“ Hayat Tahrir ash-Sham, ”the Orientalist quotes the publication. - However, the SSA forces are not enough. The Turks themselves are engaged in fighting the "IG" (prohibited in the Russian Federation) under Al-Bab. Therefore, Ankara would very much like Ahrar al-Sham to support the SSA in the fight against the radicals and help them squeeze them out of the province. ”

TV channel also talks about the split of the "opposition" Al Jazeerabroadcasting in English.

The province of Idlib became a “crossroads” for the Syrian opposition: it split here, writes Dylan Collins, deputy editor-in-chief of the English-speaking Al-Jazeera.

Clashes of “rebels” in Idlib threaten “to further weaken the already fragile opposition in northern Syria,” local analysts say. Resistance to the troops of Assad, that is, the further "armed uprising" is now a big question.

Similarly to Izvestia, the channel tells about the ongoing confrontation between the two most powerful groups in the Idlib area. But so far this group "fought side by side against government forces," recalls the author. Now they turned weapon against each other in Idlib. And this “turning point” occurred at the very time when the international community is putting more and more pressure on the rebels, forcing them to separate from the terrorists (to distance themselves from “Hayat Tahrir ash-Sham”, i.e. from the former “Dzhebhat Fath ash-Sham”) and enter into political negotiations "with the Syrian regime."

Trilateral negotiations in Astana aimed at strengthening the national ceasefire agreement, exclude the participation of militants from the "Hyat Tahrir ash-Sham." Negotiations may take place under the leadership of the UN until February 20, but it is still unclear whether any of the elements from “two main rebel groups” will take part in them.

Analysts claim that the attacks of “Khayat Tahrir ash-Sham” against other opposition groups are “clearly” connected with the negotiations in Astana. Therefore, now the “moderate factions” of the opposition members are “facing a difficult choice.”

Included in the list of terrorist organizations of the United Nations and the governments of Western states, Jabhat Fath ash-Sham (JFS) was excluded from the cease-fire regime agreed at the end of 2016 by Russia and Turkey. In addition, this grouping was singled out as a mutually agreed goal in the final communique signed by Moscow, Ankara and Tehran.

If the Ahrar al-Sham group now decides to take part in further negotiations (already in Geneva), it will enter into a much larger conflict with the heir of the JFS, Hyatt Tahrir ash-Sham.

In addition, the militants JFS blamed for the fall of Aleppo on the lack of coordination and structure among the "moderate factions" who held most of the eastern parts of the city. According to JFS, the “moderate factions” have proven to be “useless.” In turn, the “moderates,” according to experts from the Orientalists, have great distrust of JFS and of the groups associated with it; therefore, they decided to declare a “new Salafi emirate”.

The situation inside this self-styled "emirate" is relatively streamlined: many of the key supporters of the former hard line, previously causing an ideological split within Ahrar al-Sham, have been eliminated. Now the tone is set by “moderate elements”, which, accordingly, allows them to form an “agenda” unhindered.

On the other hand, “Ahrar al-Sham” is considered to be a non-negotiable grouping: representatives of its structural units have repeatedly refused to participate in negotiations. Also, analysts are not sure that the recent changes are not simply “cosmetic”: after all, the group has retained its “regional patrons” who will put pressure on it. But if, nevertheless, “Ahrar al-Sham” enters into negotiations in Geneva, it will definitely catch a major conflict of interest with “Hayat Tahrir ash-Sham.”

Meanwhile, Turkey, the “main supporter,” “Ahrar al-Sham,” continues Collins, managed to convince most of the moderate rebel groups to support the idea of ​​participating in the negotiations that are continuing in Astana. However, without the “Ahrar al-Sham” itself, one of the central factions that remained in northern Syria, “the levers of opposition at the negotiating table will be limited.”

According to experts, Ankara will do everything possible to stabilize Syria: this means finding a way to combat Fath ash-Sham. From this it is clear that Ahrar al-Sham will either reject this diplomacy and join the JFS, or, conversely, distance itself from the JFS and consolidate an alliance with Turkey, hoping that during the negotiations it will be able to maintain its territory and some degree of political influence.

In the first case (if the groups unite), they will be able to negate the fragile cease-fire. At the same time, they will fully open themselves to air strikes not only for the aircraft of the Syrian government and Russia, but also for the international coalition led by the United States.

In that case, Collins concludes, Russia is likely to support the idea of ​​an extended military campaign in Idlib, using the attack of terrorists as a pretext. The result of the new operation will be "the great losses of the rebels", as well as "civilian casualties and destruction" - just like it happened in Aleppo.

Other experts suggest that the Russians will simply watch the opposition destroy itself in Idlib. This is convenient for both Moscow and Damascus.

Now, we add, the Syrian army does not really intervene in the situation in Idlib, where the militants are waging an unorganized war against each other.

Interestingly, the militants in Idlib inherit not only from each other, but also from the American coalition. According to the same Al-Jazeera and other sources, there are American drones and aviation international coalition. Air strikes seem to destroy field commanders. True, the White House has not officially announced this yet. In addition, everyone knows how sad the accuracy of the American military sometimes reach ...