Self-propelled howitzers of the Second World War. Part of 2. Sturmpanzer i bison 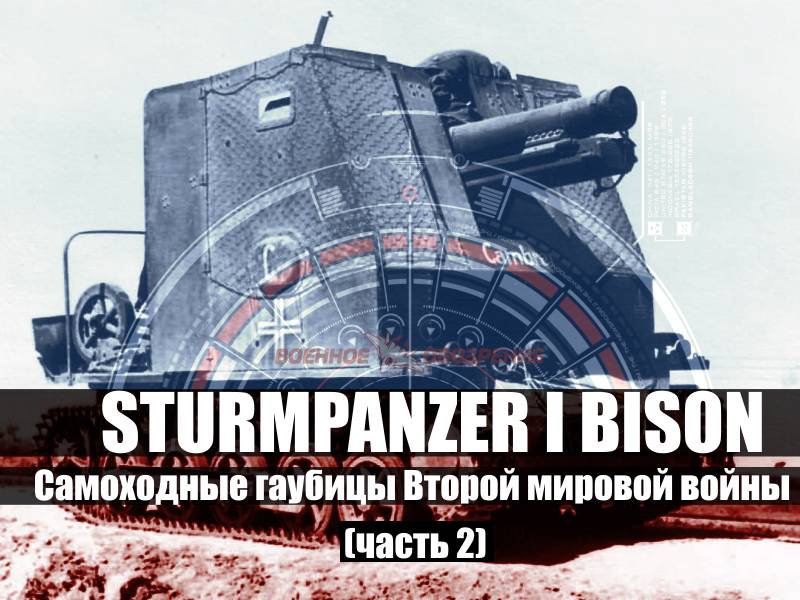 Perhaps one of the lessons of the Second World War was the implementation of the concept of self-propelled artillery, which was widely adopted. Such installations provided infantry with fire support both in the offensive and in the defense. At the same time, first ordinary infantry cannons were mounted on the tracked chassis. In the end, by the end of the war, similar machines existed in the armies of all the howling countries, but initially many of the self-propelled guns were just a product of improvisation. One of these products was the German Sturmpanzer I Bison. The installation on the crawler chassis of the field 150-mm howitzers together with the wheels gave a special charm to this installation. Such an approach led only to an even greater overload of the base chassis, but it also had its advantages - it was possible to use howitzers without a carrier in case of breakdown or damage to the ACS chassis.

This ACS was not created from scratch, becoming a chassis symbiosis from a light German tank Pz. Kpfw. IB and 150 mm howitzer sIG 33. The question of what to do with light tanks Pz. Kpfw. I have risen in Germany more than once before the beginning of World War II. The release of these tanks to the beginning of 1939, the year was discontinued, and with the released machines had to do something. The creation of an ammunition conveyor and a commander tank on the chassis of this tank was considered as various options, these projects were implemented in metal. 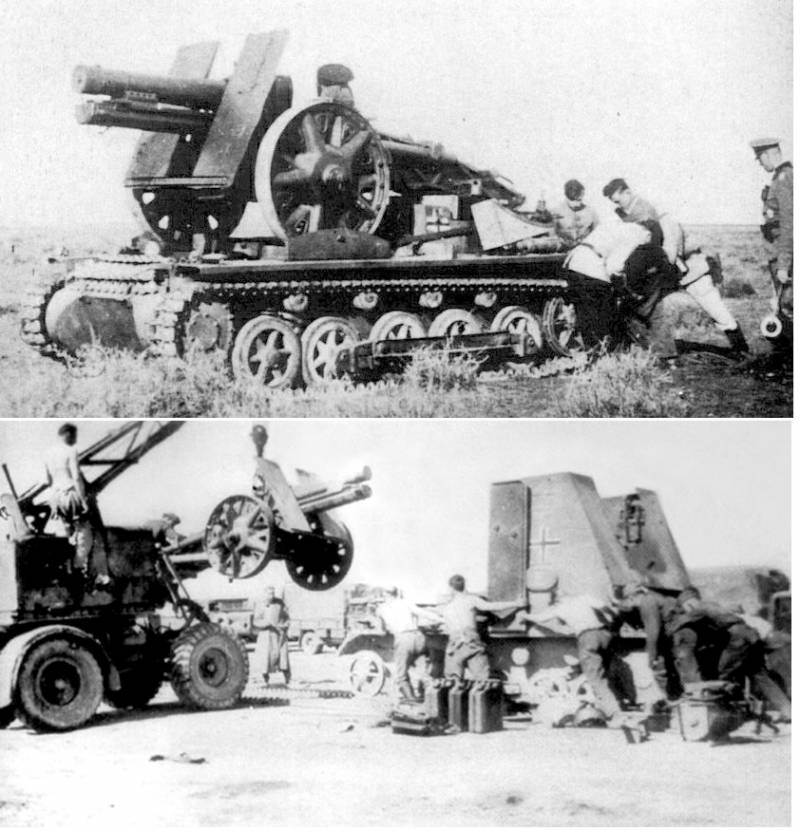 Another possible use of the chassis is Pz. Kpfw. I became the installation on him of powerful artillery weapons. After the invasion of Poland, it became clear that the towed heavy artillery often did not keep pace with the advancing tank and infantry units. The same was true for the retreat, when the means of towing were not always available, and by means of calculations it was simply impossible to roll away heavy tools somewhere. At that time, one of the most powerful tools at the disposal of the Wehrmacht, was just 150-mm field howitzer sIG 33. Real military actions only approved the German military leadership and designers in that it was necessary to create a self-propelled artillery of the same caliber, which was carried out at the end of 1939.

The technical characteristics of the self-propelled guns were very similar to the tank, as they had a common Maybach HL38 TR engine, the maximum power of which was 100 HP at 3000 revolutions per minute. With a mass of more than 8 tons, a self-propelled gun with such an engine could develop a speed of no more than 35 km / h on a highway, and when driving on rough terrain, the speed would drop dramatically - to 10-15 km / h. The gearbox also did not change (speeds forward 5 and back 1). The fuel was stored in two tanks, its total stock was 146 liters.

When converting tanks into self-propelled artillery, they removed the turret from the tanks, and installed XIGGM-mm si 150 infantry howitzer along with wheels, a gun carriage and an armored shield on the roof of the fighting compartment on steel supports. The calculation and the instrument were protected by an armored corner that was opened from the stern and from above. The sIG 33 cannon has been in production since 33. By the beginning of World War II, 1933 of such guns were already in the German army, and the end of the war was about 410 of such howitzers. The wheel axles of the 4100-mm howitzers were attached to the wheelhouse of a self-propelled installation by bolting, which made it possible to effectively fix the gun when firing as well as in motion. Judging by the photos available, some self-propelled guns could be installed radio stations. The crew of the SAU consisted of 150 people: the driver, the commander, who served as a gunner and two loaders. 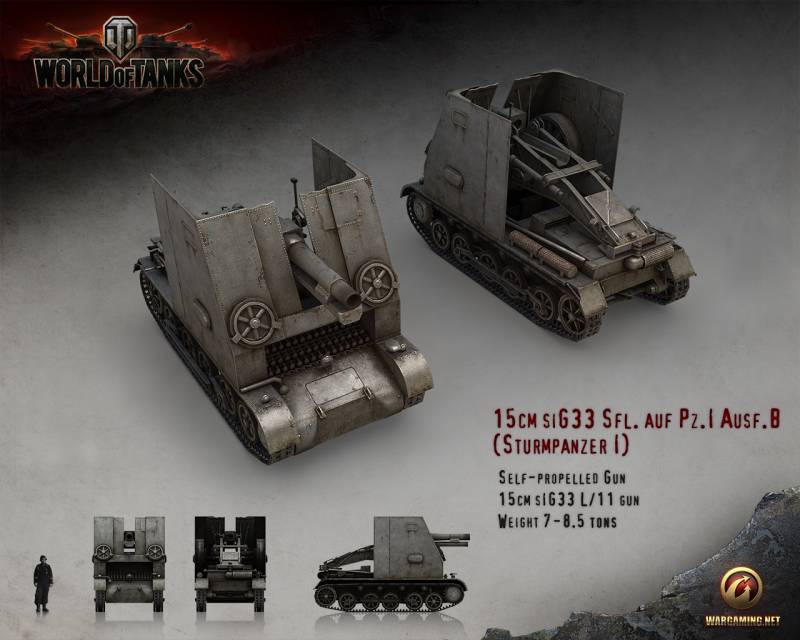 To simplify their task, the German designers installed an 150-mm heavy field gun 15cm sIG33 (with a barrel length 11 caliber) on the tank chassis directly with wheels, a carriage and a protective shield. The horizon pointing sector was 25 degrees, the angles of vertical guidance could range from -4 to + 75 degrees. The ammunition that was fueled at the SPG itself was very small - just 8 shots (6 of them in the outer baskets), therefore the self-propelled gun needed transport to carry the ammunition. The howitzer had a separate-cartridge loading, which negatively affected the rate of fire - no more than 3-x shots per minute. However, even with such a rate of fire, portable ammunition was consumed very quickly, almost instantly.

The initial velocity of the high-explosive projectile 150-mm howitzer sIG33 with a mass of 38 kg did not exceed 240 m / s, but more was not required of it. Its impact on targets located in open areas, as well as on field fortifications was very high. High-explosive shells proved to be excellent during fights in urban environments. The cumulative 150-mm projectile with a mass of 25 kg had an initial velocity of just 280 m / s, but its armor penetration reached 160 mm. This made it possible to fight with any British, French or Soviet tanks of those years. But in the melee self-propelled gun was extremely vulnerable to enemy fire.

The chassis remained unchanged and was completely borrowed from the Pz light tank. Kpfw. I B. Applied to each board, it consisted of five road wheels with rubber bandage, a front drive and rear guide wheels. On the self-propelled gun, a small-scale caterpillar with steel tracks, whose width was 280 mm, was used. 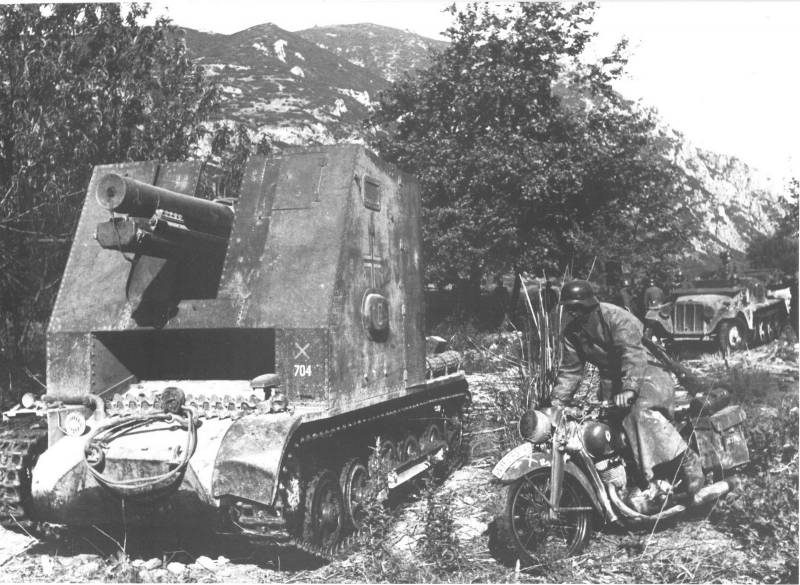 Sturmpanzer I Bison in Greece, April-May 1941, the photo also shows the semi-tracked Sd.Kfz.10 tractor and a soldier on a DKW motorcycle NZ 350, photo: waralbum.ru

Alteration of the chassis of tanks Pz. Kpfw. IB in self-propelled howitzer Sturmpanzer I Bison engaged the company Altmarkische Kättfäbrik (Alkett) from Berlin. In total, 38 SAU of this type was assembled here. It is worth noting that in the future field 150-mm howitzer sIG 33 continued to be put on tank chassis, but for these purposes they used more suitable in terms of carrying capacity chassis of tanks Pz. Kpfw. II and Czech tank Pz.Kpfw.38 (t). The machine, created on the basis of the latter, received the name Grille.

36 self-propelled guns Sturmpanzer I Bison entered service with the 701-706 mouth of self-propelled heavy infantry guns, according to 6 installations per company. All units reached alert status in April 1940. One company each was included in the 6 tank divisions that took part in the hostilities in Belgium and France in May-June 1941. Each such rota is 30 March 1940 of the year, and in addition to Bison itself, 12 single-ton Sd.Kfz.10 tractors, six trailers for the transport of ammunition, 8 trucks, 8 cars, and 18 motorcycles. The unit consisted of two officers, 33 junior commanders and 116 privates.

Motorized units armed with these self-propelled howitzers were used as a mobile means of fire support for German infantry. In battle, the SAC was ordered to destroy and suppress enemy fortifications, its firing points, to hit particularly important targets with fire. All 6 companies took part in hostilities against France, while, despite the good condition of the roads in Western Europe, the units suffered serious losses not from enemy fire, but from mechanical damage. It was connected with a large overload of the chassis of a light tank Pz. Kpfw. I, who became the base for this self-propelled gun. As a result, in one of the mouths 150-mm howitzers were simply removed from the tank chassis and used in the traditional way. Later, already on the Eastern Front, with its “developed” road network, where roads changed directions, this practice became commonplace. 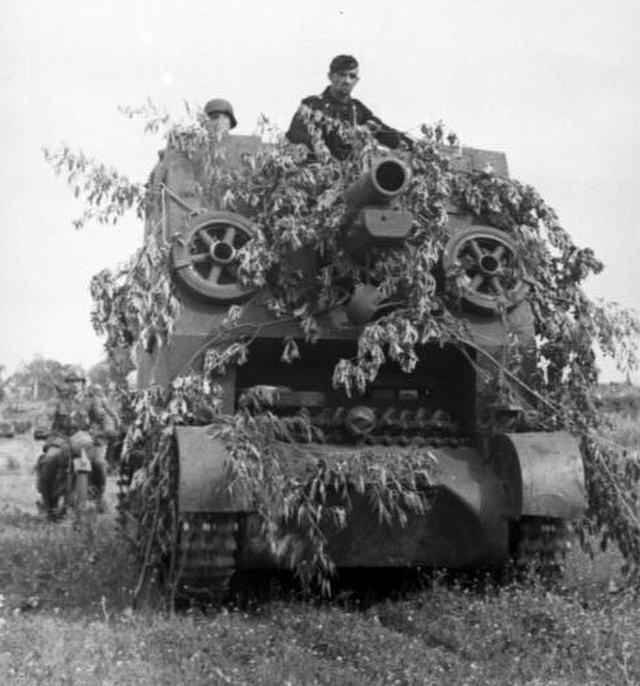 Disguise almost three-meter "barn" is quite difficult, but it was worth trying

In general, the Sturmpanzer I Bison self-propelled howitzer was not entirely successful, as was the conversion rate of its creation. It was a kind of ersatz project SAU, which was designed and built in a short time. Self-propelled gun was tall, narrow and very heavy for the selected chassis. In the case of poor management, especially when driving on rough terrain, the car could be easily turned over. The weight in 8,5 tons was a big disadvantage of the ACS, which was built on the basis of the tank chassis weighing 5,8 tons. At the same time used tank chassis were not new, but already worn out. Among other things, when firing a howitzer, the self-propelled gun sank heavily astern, rolling back to the 1-1,5 meter - this created an additional load on the entire chassis design. Of course, the German tankers immediately were not delighted with this vehicle, but the self-propelled gun was still good as a temporary means of supporting infantry and tanks in battle.

One "Bison" in the fall of 1941 was captured by the Red Army fighters, subjected to extensive testing. Taking into account the fact that parallel tests of the StuG III Ausf.B trophy assault guns were conducted, great interest among Soviet engineers, designers and military 150-mm self-propelled howitzer on the chassis of a light tank did not cause. Rather, the effect was the opposite - it was concluded that the development of this type of combat vehicles was inappropriate. 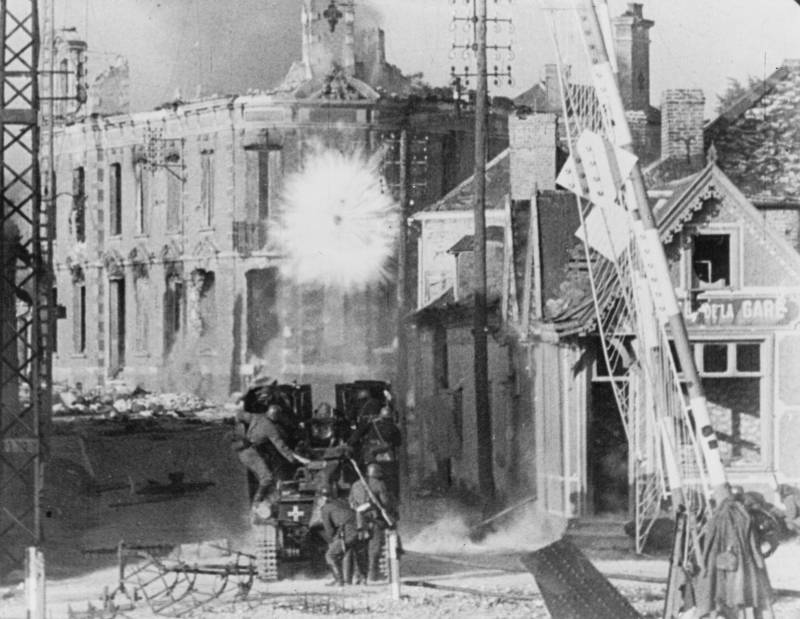 Sturmpanzer I Bison firing on the second floor of the building during the fighting in France, photo: waralbum.ru