Crimean cauldron. Part of 1. Brew from Chaly, Surgeon and the Ministry of Defense 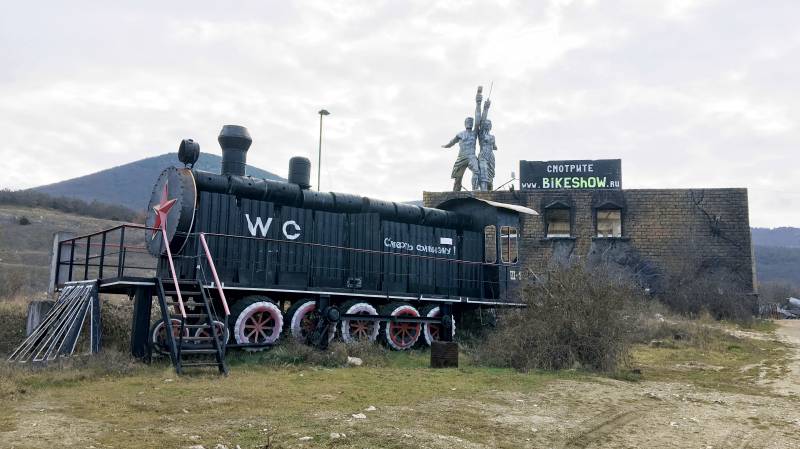 In all normal media, the passions of the deferred Patriot Park project in the Crimea have already ceased, we have had enough time for Surgeon-Zaldostanov for his frankly incomprehensible shot put on Gaydarovsky skitter dissatisfied, but the questions nevertheless remained.

Since we are not quite the usual media and can afford not just yelling on the topic without it, but to carry out a calm and thoughtful analysis of what is happening, then I present to you the fruit of some kind of joint investigation of all that is happening.

In general, attempts to understand what is happening in the Crimea (well, except that “Krymniash”), I have been implementing for a long time. With varied success. But today there is a chance to understand the processes taking place. Mokei Rusinov, who has already been mentioned on our pages many times, who has been trying to set up his business in the Crimea for two years and who lives in Sevastopol, accepted my offer to help us understand the Crimean affairs.

I admit, I was extremely surprised by the fact that such a deeply patriotic organism, like Mokey, was completely unaware of what was happening with the Patriot in Crimea. Mokey was also surprised that they have scandals and intrigues there. And plunged into the investigation, the results of which pulled on several articles.

Perhaps, we will manage to organize a full-fledged video link with the Crimea, we are thinking about it, but for now, in text mode, I will hand over the word to Mokey Rusinov from Sevastopol.

- Dear readers of the "Review", this is not so simple, honestly. I repeat, even if I am not the daughter of a submarine officer. It happened as a result of my immersion in a topic that hadn’t really bothered me before. And I will tell you honestly, Sevastopol too.

During the romantic blackout (I write “romantic”, meaning also the love of the “brothers of mezhdlisovtsev” to the Crimeans, and the amazing atmosphere of the romance of the city without electricity and the Internet for lovers) in each queue, at each meeting more or less familiar people talked about topics "Near the light." Even during the detention of Ukrainian spies, the townspeople discussed the details and made terrible eyes. But, damn it, I did not hear a single word from Sevastopol about Mount Gasfort and Patriot Park! And I know why. Now I will try to explain.

For caring fellow citizens from the mainland of Russia, it will be interesting to learn about the everyday life of the social and political life of the Crimea, and in particular, Sevastopol, from the first mouth of a man who has lived in the hero city for two years.

There are two paradigms in our city: the power paradigm and the people paradigm. These are such essential states that live in parallel and do not overlap with each other. In simple language, the powers that be separately, the people - separately.

One of the clearest examples of political ping-pong in the power paradigm is the hype around a rally against the actions of the executive in 2015 in August, personifying the conflict of the then legislative assembly A. Chalov and then the governor S. Menyaylo. To calm agitated politicians at the time, the vice-speaker of the State Duma A. Isaev was sent to Sevastopol. And then, at all, by a strong-willed, imperious decision, S. Menyaylo was demoted to the plenipotentiaries and sent away from Sevastopol. This is all to the fact that issues with officials are solved only within the framework of the power paradigm. No one asks the people what they really want.

People do not care, include adminresurs!

So, as for the raised question about the Patriot Park within the framework of paradigms: the noise is in the power, the people are quiet. In the video, which will appear in the sequel to this article, there will be an interesting poll in the city center with equally interesting answers from Sevastopol residents. In three words, their answers can be formulated as follows: we do not care.

The fact that the issue with the park is solved in the power paradigm is indicated by the fact that only officials are butting. Some officials who want the park organize public hearings in support of their ideas. Others are hysterical in the media about the consequences of building the park, drawing grim prospects. Everywhere adminresurs.

See for yourself. Hearings were held in the House of Culture in Balaclava. Link to the original:
Balaclava Protocol. 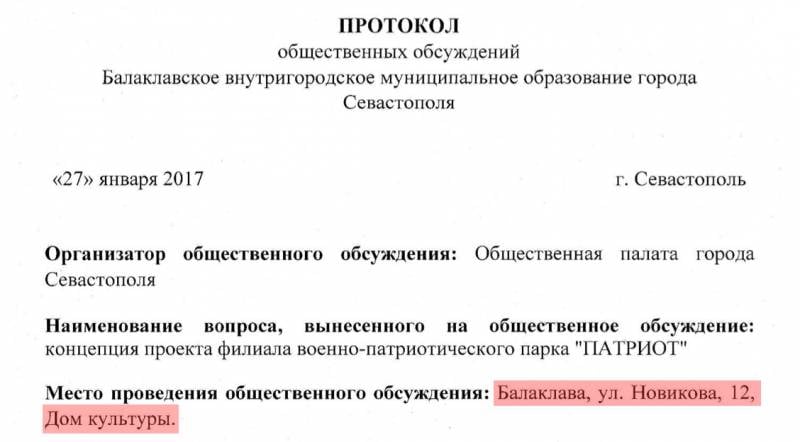 Note: Balaclava, which, although close to Sevastopol, but really is not, and the village of Eagle.

Although in the conclusion of the results of the hearings, Sevastopol is already indicated. Link to the original, everything is in order. Administrative resource worked:
About the results.

This is a curious nuance. Balaclava, which became a district of Sevastopol in 1957, is located in 15 km from the city. Among Sevastopol residents, the concept of “going to Balaklava” means visiting the neighboring city, which causes a corresponding responsible approach.

In short, no one from Sevastopol goes to Balaclava for no reason. According to the protocol on the website of the Public Chamber, 226 people came to the hearings in Balaclava. But at the same time, none of the ordinary citizens spoke there. And, as it is easy to guess, Sevastopol did not rush there in a rapid stream (I am sure, if the hearings were held in the center of the city, more people would come, patriotic clubs would lead the crowd alone). Everything went quietly, peacefully in the company of interested persons.

118 people came to the hearings in the village of Eagle. And among them, three ordinary citizens and a student took the floor (as these individuals are identified in the report of the public chamber), of which three supported the construction of the park.

That's all: from the paradigm of the people, three of the “representatives” of four spoke in favor of building the park. Winning lobbyists or just luck, as you see.

But in federal and regional the news it is said about the total support of the Sevastopol people (!) for the construction of the park. For example:

"Most Sevastopol residents do not just support the project of the Patriot Park proposed by the Ministry of Defense, they are looking forward to it."

Most! Although it is clear to everyone that when using such an institution of civil society as public hearings, it is at least incorrect to use the term “majority”. If the question were worked through a referendum or telephone polls, then the representativeness would allow to talk about public opinion.

Let's see what the intrigue of passion for Gasfort.

So, the Surgeon and the Ministry of Defense want to build a multifunctional patriotic center near Mount Gasfort.

Bikers who currently occupy this territory are “for”. Rear Admiral, a representative of the Black Sea Fleet, expressing the opinion of the Ministry of Defense, "for". Patriotic clubs "for". Even the majority of those 344 people (and not the majority of Sevastopol residents) who came to the public hearings in the park are also in favor.

Below is a scan of the conclusion, the link source 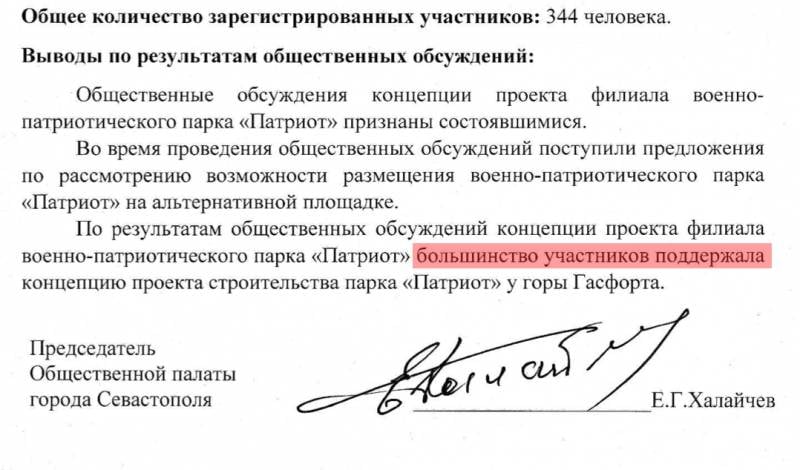 But, as we know from the news, the Ministry of Defense and the Government of Sevastopol decided not to locate Patriot Park at the Hasfort Mountain, which very upset the Surgeon. The question arises: how can this be, if all the interested "for"?

We begin to look for the answer to this difficult question.

Secondly, we read the words of I. Konashenkov that the Ministry of Defense will not allow “to drag itself into squabbles” around the construction of the Patriot park in Sevastopol.

Translated into ordinary language, the words of the major general mean the following: you already understand it in Sevastopol, and if everything is ready to do for people, then the Ministry of Defense is in, and if you put sticks in each other's wheels, we will wait.

Thirdly, the owner of the territory used by the Night Wolves unexpectedly showed up. This is Balaklava Mine Management. According to a spokesman for the BRU, this site was received back in 1977 for perpetual use. And in general, according to geological exploration, flux limestones lie in this area. At present, the Arbitration Court of Sevastopol is considering a BRU claim against the city government and the Night Wolves for regaining control over the GOK's territory.

And all this drama unfolds with complete popular indifference to the problem. The answer to a difficult question suggests itself. The city of Sevastopol is not ready for the implementation of truly large-scale projects. Not ready either morally (indifference of citizens) or ideologically (squabbles in power). That is why the Ministry of Defense, not wanting to sully its successful image with squabbles of a regional scale, hastened to leave the controversial object alone. As a result, we have what we have: for three years in the bank with scorpions still rustle and scuffling. So come back later ...

Here is an ad hanging now on the booth KP at the entrance to the territory of "Night Wolves." 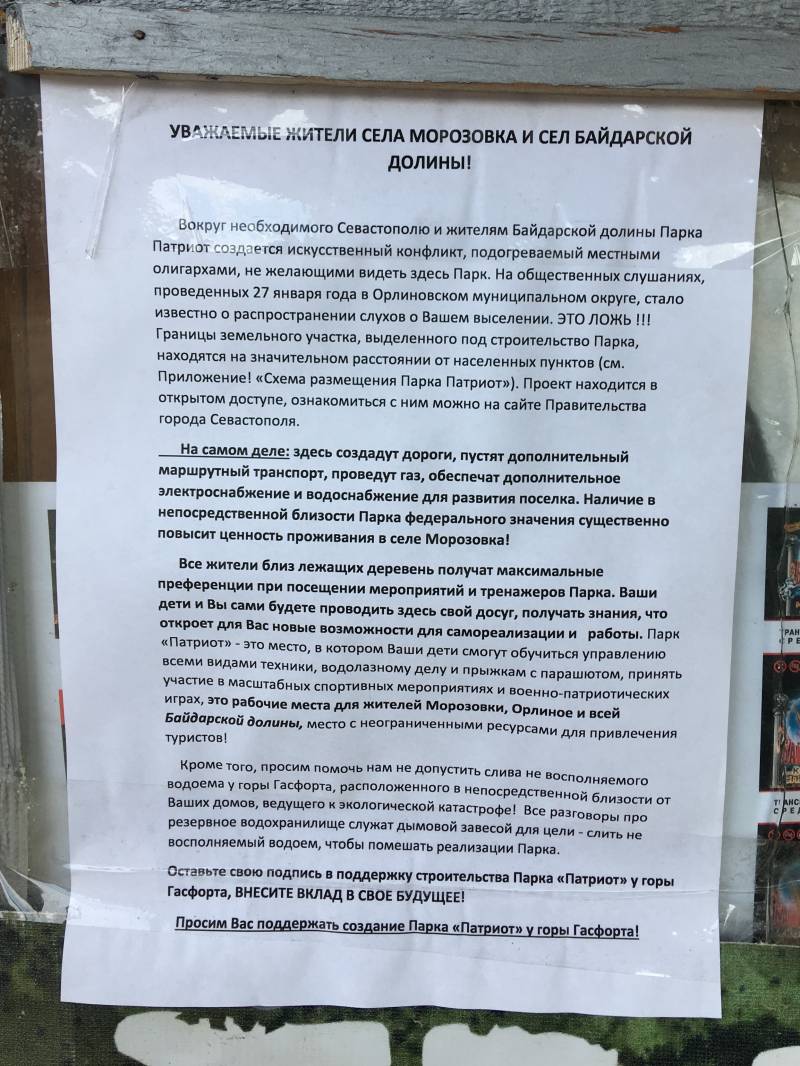 This was the technical side of the issue of building near Mount Gasfort, in the next, more lyrical material I will tell you what this place is famous for, what it is and what role it played in stories Russia. A sort of excursion to understand what the bikers wanted, and why the authorities do not want it.

And there it will be possible to think on whose side to stand ...