Self-propelled howitzers of the Second World War. SU-5 (part of 1)

February 6 2017
13
During the Second World War, the artillery systems of the self-propelled howitzer subclass, unlike other highly mobile self-propelled guns, had relatively short-barreled guns as the main armament. The first howitzers were created for shooting with large elevation angles from closed positions. Such artillery systems were actively used by both axis countries and allies.


The sufficiently large caliber of the used howitzers allowed them to effectively deal with enemy field fortifications, especially wood-earth ones, using powerful high-explosive ammunition. In those years, as now, many self-propelled guns were created on the basis of serial tanks, which made it possible to use them directly on the battlefield, including for direct fire fire. In this case, the line between self-propelled howitzers and assault guns was almost blurred, many of which were also armed with short-barreled guns - howitzers or howitzers-guns.

We will begin our acquaintance with self-propelled howitzers of the Second World War with the Soviet system - SU-5. This self-propelled gun was developed in the Soviet Union in the first half of the 1930-ies and released a small series of all 33 machines. 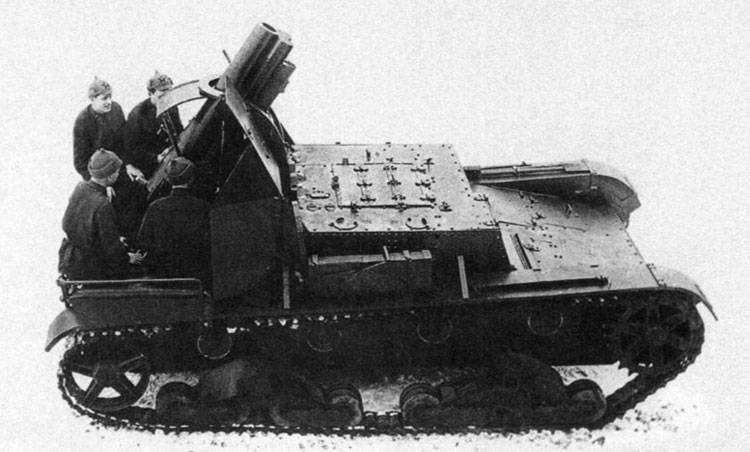 SU-5 - Soviet lightweight self-propelled artillery system class self-propelled howitzers, was created on the basis of a light tank T-26 model 1933 of the year. It is worth noting that in the Soviet Union there was another self-propelled unit with the same index. Back in 1931, the work on the self-propelled unit SU-5 was conducted by an experimental workshop of the Bolshevik plant in Leningrad. This self-propelled gun was built on the basis of the tracked tractor "Kommunar". The work was carried out in the framework of the project to create "self-propelled units of the second echelon". To arm this car was planned 76-mm anti-aircraft gun 1915 samples of the year, the installation did not have a reservation. To reduce pitching when shooting, the SU-5 was equipped with four folding stops. A prototype was assembled in the spring of 1932, and successfully passed a series of tests. Even an experimental batch of 12 units for conducting full-fledged military tests was ordered, but their assembly was soon stopped as the 76-mm anti-aircraft gun of the 1931 model of the year, for which the tractor chassis was already too weak, became the main anti-aircraft gun of the Red Army. From the tractor chassis as a base for self-propelled guns in the USSR quickly abandoned.

In 1933, in parallel with the beginning of work on the creation of high-powered self-propelled guns in the Soviet Union, work began on creating the so-called "small triplex" for divisional artillery, which was supposed to include self-propelled guns equipped with 76,2-mm regimental gun, 121,9-mm howitzer and 152,4-mm mortars. Thus, it was planned to close the entire range of possible combat missions facing the units of the Red Army. For the development of all three self-propelled guns, it was responsible the design bureau of the Kirov experimental machine-building (No. XXUMX) under the leadership of S. A. Ginzburg and P. N. Syachintov.

As a chassis for the new SAU, a full-fledged tank was chosen - the light tank T-26 of the model 1933 of the year, which was launched in Leningrad. At the same time, the existing tank layout was completely unsuitable for SAU, therefore the tank hull was radically changed by the designers. The self-propelled control unit together with the driver's seat and controls, as well as the transmission elements were still located in the nose, but the engine compartment was shifted to the center of the hull, it was separated from the remaining compartments by armored fences. In the engine compartment, the standard petrol engine of the T-26 Tank 90 hp was installed. with a shortened driveshaft, main friction clutch, radiator, fan, fuel and oil tanks, separated by sealed fences. On the roof of the hull holes were made with armored louvers for the entrance of cooling air, as well as two hatches for access to candles, a carburetor, valves and an oil filter. 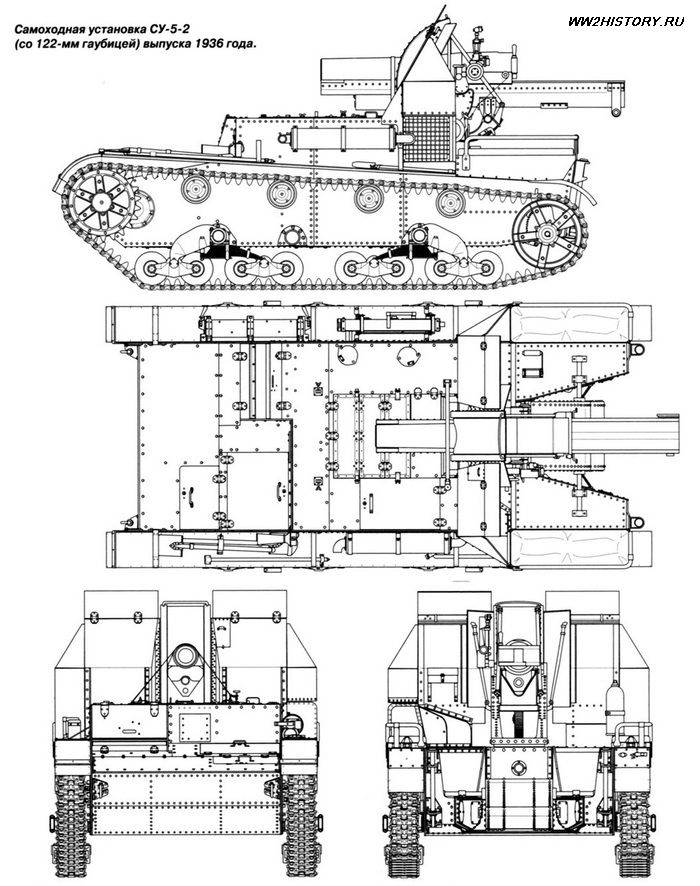 The fighting compartment, in which there were places for four members of the crew and the gun itself, was located in the rear part of the hull. To quench recoil during fire, a special opener, which was at the stern of the self-propelled gun, was lowered to the ground. In addition, if necessary, additional side stops could be used. At the same time, the chassis of the T-26 light tank has not changed. As on serial war machines, for each side, the undercarriage consisted of: 8 track rollers interlocked in four trucks (1-2 and 3-4 trucks had a common suspension with shock absorber on leaf springs), 4 supporting rollers, rear guide and front driving wheel. 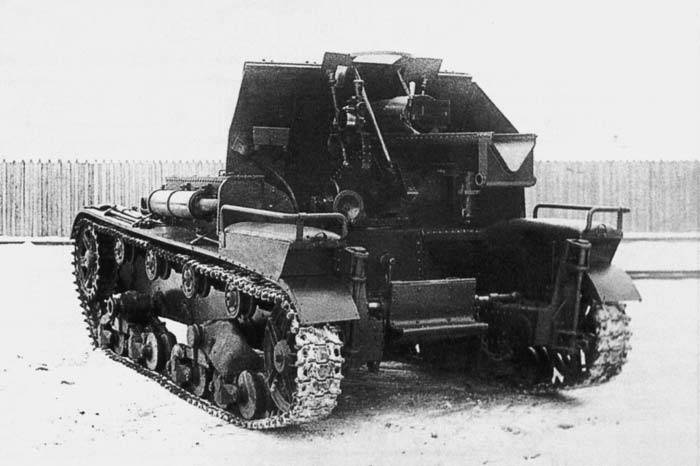 The plan for 1936 year provided for the release of a batch of 30 SAU SU-5. In this case, the Soviet military gave their preference for the model SU-5-2, armed with an 122-mm howitzer. They refused SU-5-1 with 76,2-mm regimental cannon in favor of the AT-1, and for 152-mm mortars of the 1931 model, the chassis of the T-26 light tank was rather weak. The first 10 serial 122-mm SU-5-2 self-propelled howitzers were ready for the 1936 summer of the year. Two of these machines were immediately sent to the 7 of the mechanized corps for the passage of a series of military tests. They were conducted from 25 June to 20 July 1936, in the area of ​​Luga. During this time, the mileage of the ACS was 1014 and 988 kilometers, with each of them fired 100 shots. The results of the military tests of SU-5-2 self-propelled howitzers were as follows:


1. The SU-5-2 self-propelled artillery mounts endured troop tests.
2. SU-5-2 are rather mobile and strong in marching conditions, possess sufficient passability on the district and are steady at firing.
3. When making changes and additions to the design of ACS, it is desirable to adopt the mechanized formations as artillery of direct fire support.
4. As a rule, ACS should be used from open positions as escort artillery.

During the military tests, the performance characteristics of the SU-5-2 self-propelled howitzers were specified. The mass of the combat vehicle was 10 tons, which led to overload and rapid overheating of the power plant. The angle of horizontal shelling from 122-mm howitzer was 28-30 °, howitzer angle of elevation + 60 °, declination - 0 °. The transported ammunition consisted of 4 shells and 6 charges to them (separate charge). The height of the line of fire - 1880 mm, firing rate - up to 4-5 shots per minute. The transfer time of the self-propelled howitzer from the traveling position to the combat position is no more than 25-30 seconds. 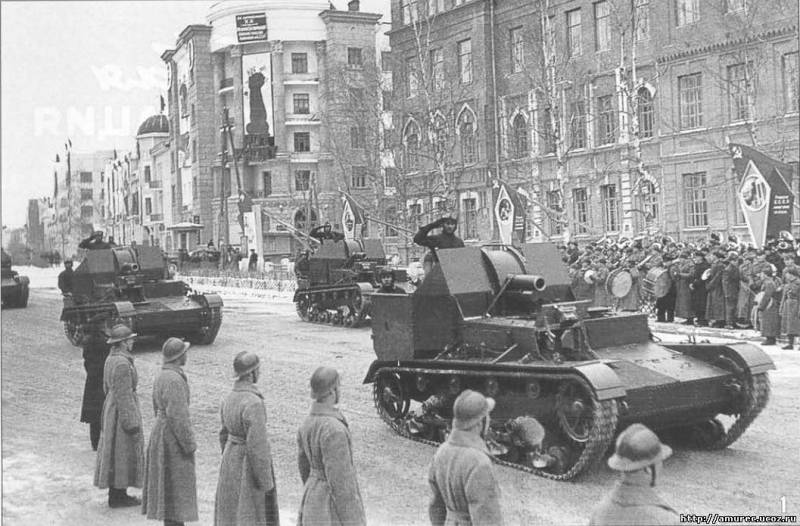 SU-5-2 at a military parade in Khabarovsk, 1936 year
Despite generally positive reviews from the results of the tests, there was no great future for self-propelled guns. The number of SAU SU-5-2 was quite modest. The next batch of self-propelled howitzers from 20 already had an increased mobile load (up to 8 shots), an additional vent hatch over the point of the mechanical inlet and a slightly shifted exhaust pipe. Part of the self-propelled guns was equipped with partially folding armor protection calculation, which was covered by airborne armor plates with a thickness of 6 mm. In order to reduce the load on the chassis, the suspension of the self-propelled unit was strengthened by increasing the thickness of the main springs on 1-1,3 mm. This step developers did not lead to significant improvements, as for such a heavy machine, which was the self-propelled gun SU-5-2, a new type of suspension was needed. On top of that, not one self-propelled howitzer SU-5-2 has ever received a more powerful engine.

An improved version of the ACS was planned to be released in the first half of the year 1937, with the subsequent revision of all production machines, but life decided differently. The creators of the SAC overtook repression. After the arrest of Syachintov and a number of other designers who worked on this project, the topic of self-propelled artillery in the Red Army faded into the background, and self-propelled artillery installations, created under the guidance of arrested designers, fell into the category of "wrecking". Work on the program "small triplex" were terminated completely. The arrest of Marshal Tukhachevsky, who was one of the main initiators of the creation of self-propelled artillery in the country, could not but affect the project in a negative way. Despite this, the already released self-propelled howitzers SU-5-2 were not removed from service and continued to be used by the troops.

Very little is known about the combat use of self-propelled howitzer SU-5-2. What is generally not surprising, considering that they were released in a very limited series. The ACS data was entered into service by individual mechanized corps and brigades individually, serving mainly as a supplement for conventional field artillery. For the first time, SU-5-2 was used under combat conditions in 1938. This happened during the fighting with the Japanese near Lake Hassan. The installations operated as part of the artillery batteries of the 2 and 3 tank battalions of the 2 mechanized brigade ODVA in the vicinity of the Nameyannaya and Zaozernaya heights. Despite the small amount, 122-mm self-propelled howitzers showed themselves well as a means of fire support for tanks and infantry, receiving high marks in post-battle reports. 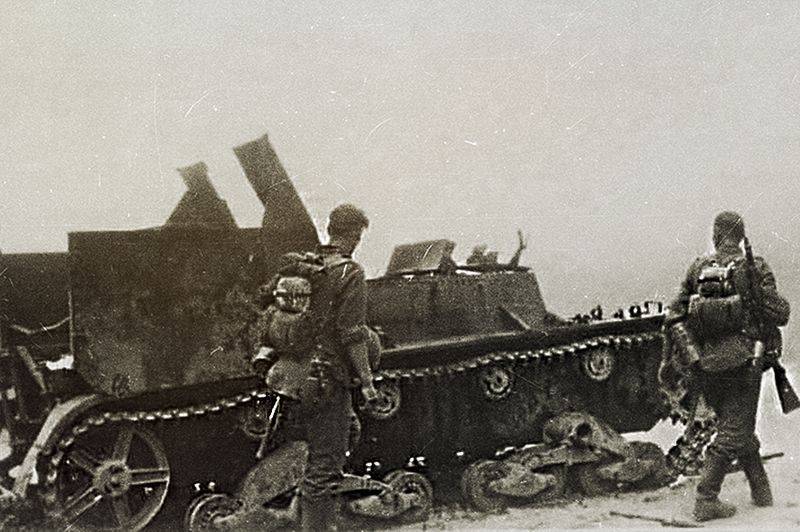 Partially destroyed SU-5-2 and Wehrmacht soldiers not against its background
The next time, SU-5-2 was used already during the Polish campaign of the Red Army. Soviet troops entered the territory of Poland 17 September 1939 of the year. As part of this operation, the battery of self-propelled howitzers SU-5-2 from the 32 tank tank brigade marched 350 kilometers, never having entered into a combat clash with the enemy. After that, one of the self-propelled guns needed an overhaul.

In the future, the remaining SU-5-2 was almost not exploited, peacefully surviving its short century in military service in the Red Army. Despite this, on June 1, 1941, the Red Army still had 28 self-propelled howitzers of this type (11 were in the Far East, 8 in the West and 9 in the Kiev Special Military District). Of these, only 16 cars were serviceable. It is rather difficult to say anything about their combat use during the Great Patriotic War. Most likely, all the vehicles available in the western military districts were lost in the early days of the war. At the same time, some of them were abandoned or abandoned due to various technical malfunctions. There is only one German photograph depicting the SU-5-2 incapacitated on the march. This self-propelled gun was destroyed by its own crew or defeated by a German aviation is unknown. To this day, not a single self-propelled gun SU-5-2 has survived.