February 6 2017
5
Two years ago, only the lazy one did not write about the house of the Rostov businessman Igor Grekov, who received several hundred refugees. Journalists from all over the world came here - people were making films about people fleeing the war, humanitarian aid trucks were brought to them and invited to other regions. It was in 2014. At 2015, media interest declined and there was virtually no publication last year. And it seemed that the house was empty.


But by news regular reports of explosions in the Donbas. So, the refugees will go to Rostov again.

I call one of the managers of the house of Grekov, Arman Savidi, and I am surprised to learn that people still live in the house. 58 man, of whom 31 is a child.

- For two and a half years there was not a single day for the house to be empty. I will not say the exact figure, but more than 2000 people have passed through us. We, as before, are trying to help visitors with documents, arrange children to school, adults are looking for work. Nothing changed. Just before there were state programs, and now we are doing it ourselves.

Who is behind this "we", a little later. In the meantime, the background. 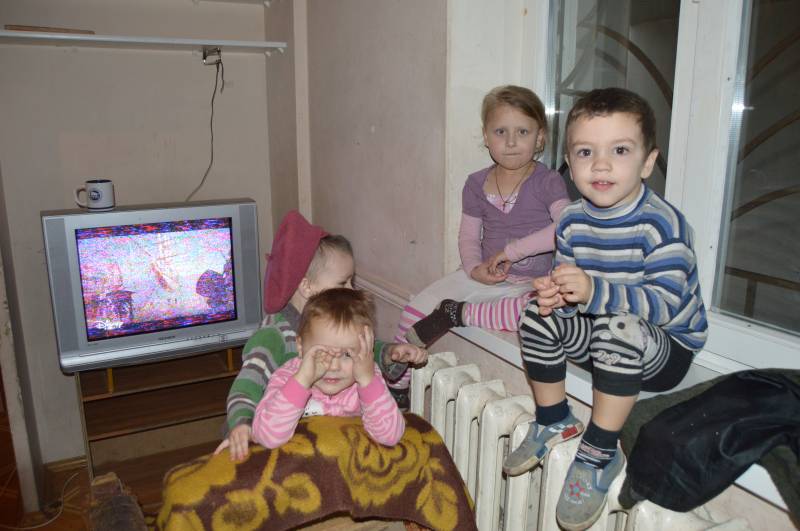 So, at the beginning of June 2014, when a flood of refugees from Donbass rushed into Russia, the volunteers Anna Pechorin and Arman Savidi began to transport people from their border accommodation points to Rostov in their cars. For the refugees, they found an apartment in which 15 people were to be accommodated. They brought them to the designated place, but it turned out that the option broke.

- Where to put people? They called for help in the diocese, - remembers Arman. - They contacted Igor Grekov. And he is known for his charity work. And although at that moment Igor Mikhailovich was on treatment abroad, he offered to settle the refugees in his new home. Timing is not limited-let them live as they want. Soon reports began to come in that people from border areas were spending the night at train stations, and the accommodation centers were overcrowded. Then he called again and told us to populate the house completely.

The three-storey mansion area of ​​a thousand square meters - 17 rooms. Dining room, living room, large lounge. The house was new and completely empty. Then the volunteers threw a cry and in a few weeks they collected the most necessary things: beds, chairs, tables, forks, spoons, cups, linens. The administration of the region, the church, and the Ministry of Emergency Situations took the beds to the meeting. Igor Grekov again did not stand aside - he took upon himself the question of food supplies, the purchase of medicines and the payment of "communal". Home maintenance and replenishment of warehouses with products still on it.

In the first year psychologists also worked with refugees. People came with serious injuries - both physical and psychological. Someone killed a relative in front of a splinter, someone's house collapsed, and close people died under the rubble. People brought all these troubles here - here they were treated, helped with documents and sent on. At that time, a program to resettle refugees in other regions of Russia was still working.
After a while, the visitors came to realize that their past life could not be returned - they had to look for work, somehow settle down.
Commune and its inhabitants 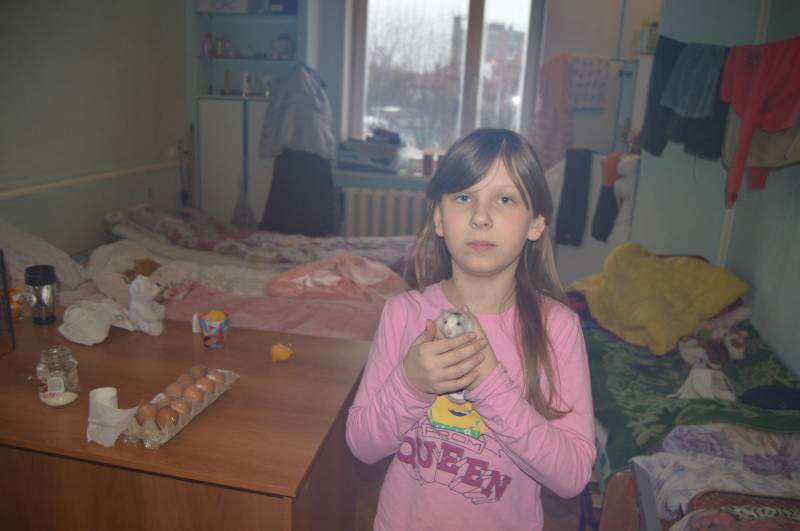 All of them met and helped to establish the life of a reserve officer Arman Savidi. Publish it history he did not allow. Let me just say that fate led him to help the refugees. I thought that would help to transport people one time, another. But he got involved - now he is one of the governing community of the refugees.

I call the commune of the inhabitants of the mansion conditionally. From the general here only - a human misfortune, and food and household items, without which the beginner can not do at first.

I arrived at Grekov's house on Saturday evening. On weekdays, the corridors are almost empty. On the farm only mothers with babies. Because there are a lot of children, there is a free kindergarten here. Working women leave their preschoolers in the care of the unemployed.

There are few men in the house. Those who are trying to earn money to go to the apartment. Nobody is thrown out of Grekov’s house. But life here is very reminiscent of the Soviet communal, and they have very few people like it. Therefore, only those who simply have no choice are living here for a long time.

For example, Irina Kobzeva. She is a mother of children with serious illnesses. My son has a congenital heart disease. Her daughter has Willebrand disease, that is, complete blood clotting, in which the most minor cuts can lead to death. The price of drugs necessary to maintain the life of a girl is very heavy for the Kobzevs. Igor Grekov also helps to solve this problem. The family lives in an isolated room, and school teachers come to the children to the house.

- This year, the daughter needs to get a passport, proceed to study further. But how to do it? I will not apply a mind. If we go to Donetsk, we will surely rot there in the basements - I annoyed them a lot. And on the programs acted, and went to Putin on the live broadcast. I'm afraid ...

Elena Fedorovna Chernyshevskaya from Pervomaisk also lived here. She - grandmother - did something that even a strong healthy man could not do under normal conditions. Twelve kilometers carried on the hands of a wounded grandson. Carried under shelling. She said that in her experience she refuted the common phrase that a shell twice hits one well. Falls. And thrice too.

She brings up her grandsons Seryozha and Diana alone. The daughter died, the father of the children is not known where. When began to fire at Pervomaisk, a shell hit their apartment. An eleven-year-old Serezha walked across a shard of a mine. When my grandmother saw a bloodfilled grandson, she caught him in her arms and carried her to a nearby village. By that time, their hospital had already been bombed. Carried on hands, fell, pressed to the ground, with each new explosion. Deaf, burned. But informed.

And after Seryozhe had an operation and stitched up a cut cheek, she ran back to Pervomaisk. For granddaughter. She remained in the basement, under the supervision of her neighbors. And again the same way - now with Diana and documents. To the hospital to Sergei. Twelve kilometers.
When it was over, Elena Fedorovna found out that she was contused. She stopped hearing. In Rostov, my grandmother was treated, they restored the function of one ear. The second remained deaf.

In Grekov’s house, the Chernvshevskys lived for some time, and then returned to Pervomaisk. 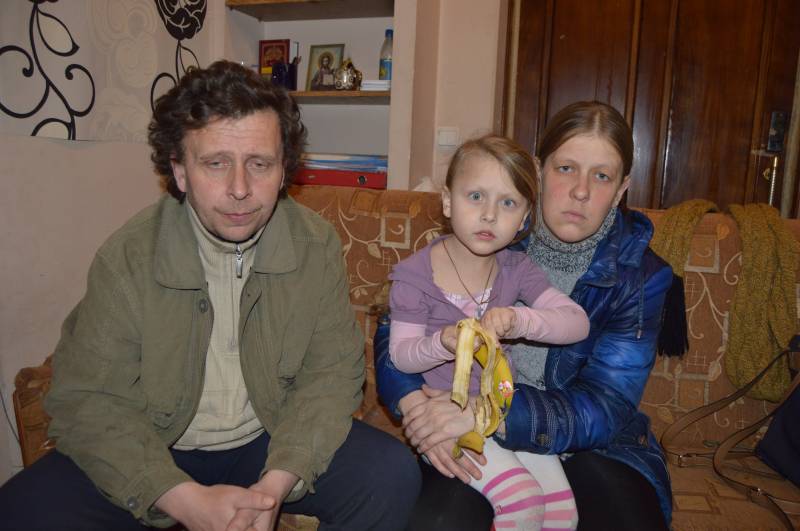 Newcomers have their own stories. Here, for example, Sergey and Alla Averkina with three children came from Makeyevka. Their house is destroyed. They rented apartments, then, when the money ran out, spent the night at porches. Came here to countrymen. With housing did not work. Again - the entrance, upholstery bureaucratic thresholds in finding help. And nothing. The last step - came with the children to the city administration.

- If you do not help, we will live here. So I said, - explains Sergey. - Then got scared. They gave us the address of the house of Grekov.

Now Sergey and Alla are working at a construction site. For three months, 52 received thousands of rubles for two. Hope to save money and remove the outhouse. They do not plan to return home, they have nothing else there.

- Over the years, 5-6% returned from the total number of families who lived in our house. Some were more fortunate and they ended up in good conditions under the refugee resettlement program. Someone helped relatives or benefactors. But there are a lot of people who have returned to us, ”says Arman Savidi. - For example, the family went to the Urals. Took her mistress. It looks cordial, and at first everything was fine. And then it turns out that she hoped that she would be paid for the accommodation of refugees. And so it began: do not turn on the light, do not open the refrigerator, do not watch TV ... It came to the point of absurdity. And they have no money even for a return ticket. Here, we bought them tickets, returned to Rostov. Helped to settle here. 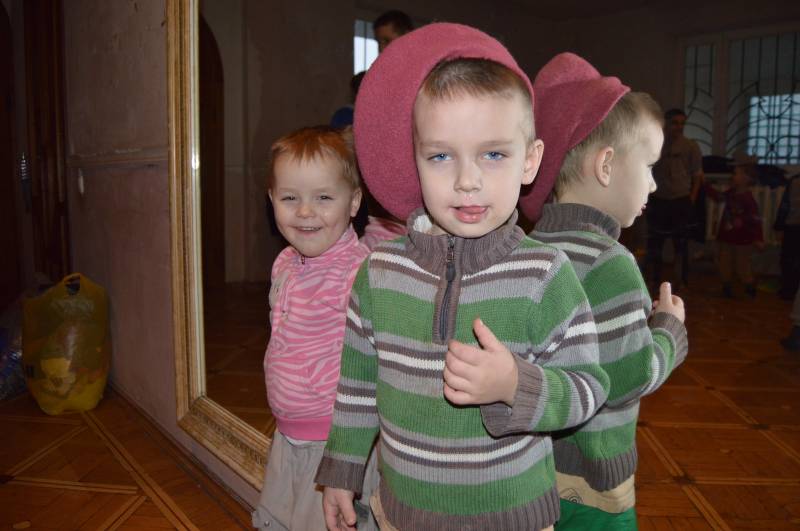 - Why? A week ago, a mother came with two babies - 4 and 2 of the year. We will arrange her as a nurse in kindergarten. And the children are supervised, and she, albeit a little money, but earns. Cleaners, builders, plasterers are always needed. But people with higher education, of course, more difficult. We stopped teacher English. Super professional. She has titles, all sorts of awards. I went to the principal to ask for her. But he refused. “Understand,” he says, “our local teachers do not have everything arranged. For children, really, there are no problems - they are accepted in the clinic, and they go to the section.

- People. Rostovites, Russians. Grandmothers who bring homemade twists, Igor Grekov, his friends, Anna Pechorin. When I have free money, I will buy a bag of potatoes, onions, carrots. From the world by thread. Earlier, when the topic of refugees was popular, whole trucks with products, things, household chemicals came to us. It was such that they could not accommodate everyone. Now the warehouse is empty. Each family feeds itself, but at the same time we are trying to make some kind of emergency food in the house. It happens that people come with one bag, and we have no things for them. Then I go to the forum and write: "Guys, you need this and that." And people respond.

- But there are probably opposite cases when people come not from war, but in search of a better life?

- Anything can happen. Over the years I have heard so many stories, I met so many people! And there were among them, and unpleasant citizens, and vice versa, people who are ready to thank you all their lives for a piece of bread. In difficult circumstances, character traits are exacerbated. But believe, views of life do not depend on nationality. So a good person, or not, in this case is not important. Our business is to help them. And how they will take this help is a matter of personal choice.

Details of the life of the inhabitants of the house of Grekov can be found on their website - http://angelann.ru/.
There is also information about what refugees need today and a current account to which you can send a money transfer.