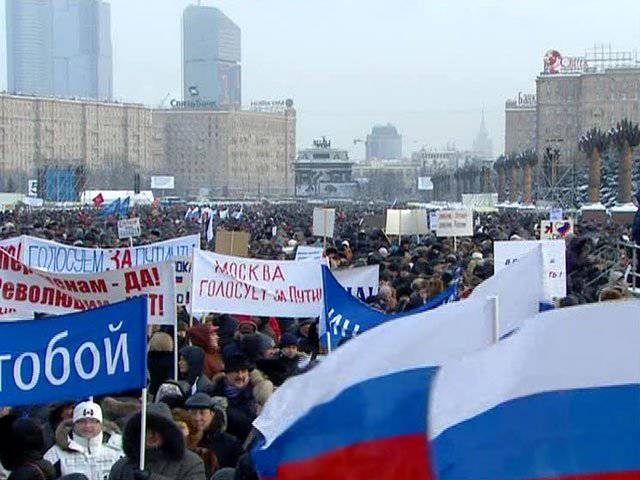 In the capital, protests ended. According to the General Directorate of the Ministry of Internal Affairs of the Russian Federation in Moscow, the maximum number of participants in the rally of patriotic forces on Poklonnaya Hill in statics was about 138 thousand people. "Taking into account the people coming and going, the number of participants in the event could have been greater," the department said. Those who gathered at the rally occupied the entire space from the Victory Park subway to the stela in front of the Museum of the Great Patriotic War.

The posters and banners raised above the rally participants included slogans: “We don’t want revolutions,” “We are against rocking the country,” “Elections must be fair,” “Gazprom, enough to feed Echo of Moscow!” And others.

“We have different points of view, but we are unanimous in the fact that we have Russia, that we will not allow it to collapse,” said political rally leader, public figure Sergei Kurginyan. "Orange wanted to dictate 150 to millions of people, bringing a crowd of people to the streets. Let them see how many people came against them. And if necessary, we will bring even more," he said.

"The Orange say they beat Putin, and they beat the Russian state," said writer Alexander Prokhanov, in turn. "We are for fair elections, so that our factories are restored, our submarines float, our spaceship flew to Mars," he said.

Another rally leader, Maksim Shevchenko, expressed confidence that the orange movement was “an American fake.” “We will decide who will be our president,” he said.

“We will not allow Russia to collapse. It will not repeat the fate of the Soviet Union, it has defenders,” said Pavel Popovskikh, head of the Union of Russian Paratroopers. "Let's follow the actions of the Orange: another month before the elections, and they have already declared the elections illegitimate. The landing party is with you!", He said, addressing the crowd.

Writer Edward Bagirov noted that Vladimir Putin expressed support for the rally. “As a confidant of Vladimir Vladimirovich Putin, I convey greetings from him,” he said.

The posters and banners raised above the rally participants contained slogans: “We don’t want revolutions,” “We are against rocking the country,” “Elections must be fair,” “Gazprom, enough to feed Echo of Moscow!” other.

The participants of the rally also expressed support for the candidate for the presidency of the Russian Federation, Prime Minister Vladimir Putin. They held posters with inscriptions: “Putin is our president!”, “For Putin!”, “Putin = stability!”. The rally ended with a friendly chant "No to the orange plague!", ITAR-TASS reports.

Opposition rally "For Fair Elections" broke the record of the previous two in number. According to police, up to 40 thousand people took part in it. Last time, according to the Ministry of Internal Affairs, up to 30 thousand people participated in the rally "For fair elections" on Academician Sakharov Avenue. "Today, the maximum number of participants at the peak was 35-36 thousand people," - said the press service of the Main Directorate of the Ministry of Interior in Moscow.

However, information about the number of protesters was again fundamentally different: the organizers of the march, which started from Bolshaya Yakimanka, and the rally "For Fair Elections" at Bolotnaya Square, reported that more than 100 thousand people came to the rally. However, the permitted number of participants has been set to 50 thousands. The rally has already ended, its participants are leaving the Swamp area. The next action, as reported by the event’s leader, Vladimir Ryzhkov, will be held in Moscow on February 26.

The opposition rally also took place on Sakharov Avenue. It was organized by businessman Konstantin Borov and leader of the unregistered Demsoyuz party Valeria Novodvorskaya. According to the organizers, Sakharov Avenue should have gathered up to 30 thousands of participants, however, several dozen people came.

About a thousand people took part in the rally "For Clean and Honest Democracy", organized on Pushkin Square in support of LDPR presidential candidate Vladimir Zhirinovsky. The event took place without incident.

In his speech to the rally participants, Vladimir Zhirinovsky said that the Liberal Democrats "stand in solidarity with everyone who is protesting against the elections," and accused the government of having "provoked people to go out into the street."

Deputies of the State Duma from the Liberal Democratic Party of Russia and the leader of "Labor Russia" Viktor Anpilov also spoke at the rally. The participants of the event waved yellow-blue party flags and chanted “Zhirinovsky is our president”.