According to the American and Taiwanese intelligence agencies, before the march, the batchers performed missile launches and bombing in one of the PLA Navy training areas in the Yellow Sea.

After the pilots successfully passed the night takeoff and landing tests, the AUG set out on a march and headed south towards the Miyako Strait, which proceeded on December 25. On the way back, the group was already on the Taiwan Strait. The Chinese ships were taken to escort airplanes from the Taiwanese Air Force at seven o'clock in the morning on January 11 in the southwestern identification area and came out of military surveillance a day later (in January 6.30 12) in the northeast square of the air defense zone of the island state. According to Taiwanese specialists, during the 500 miles, the AUG ships followed the average speed of 12 units, which did not allow for flight deck operations, but this is quite enough for testing anti-submarine and air defense missions.

As astonished, so will respond

The group consisted of destroyers with guided missile weapons Zhengzhou, Haikou (052C project), Changsha (052D project), Yantai, Linyi watchdogs (054A project), and also Zhuzhou light corvette (056 project). It should be noted that the crews of the four ships (Yantai, Linyi, Zhengzhou and Haikou) are the most experienced. They have repeatedly participated in anti-piracy missions in the Gulf of Aden.

Regarding the aviation component of the AUG, it is known that 19 heavy Jian-15 fighters were deployed on Liaonin, of which only four aircraft could not perform nighttime bombing in one of the training areas of the SKM .

Liaonin also deployed four Zhi-18 transport helicopters. They were employed to work out the rescue of the pilots after landing on the water and moving goods from the universal supply transport (TCB) to “Gaoyuhu” (project 903А). According to Chinese experts, these vessels do not meet all the requirements of the AUG and therefore they will be replaced by ocean TCB with a displacement of 45 000 tons (draft 901).

The tasks of the antisubmarine defense were occupied by the crews of the ships, as well as the Chih-9С helicopters, each of which is equipped with a lowered hydroacoustic station and is armed with light torpedoes (copies of the Italian Alenia).

The anti-aircraft defense measures of the ships of the Northern and Eastern fleets, which are part of the first PLA Navy AUG, were worked out in bilateral exercises with the Air Force of the Southern Military District. The maneuvers were closely watched by the Japanese Self-Defense Forces (ENP). It is known that the Chinese military have successfully repelled all attempts to deliver air strikes against an aircraft carrier by a conditional opponent. Unmanned subsonic and supersonic targets of the Rainbow series and BWIQ were used in training activities. 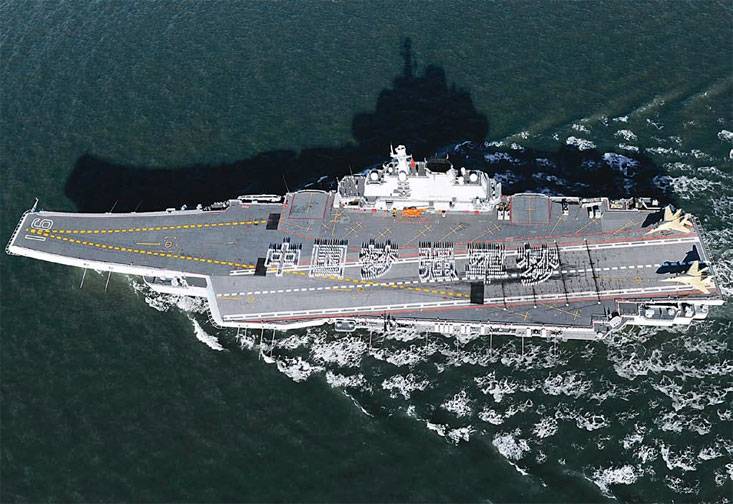 Interestingly, experts of the Institute of Military Art of the Navy of the Academy of Military Sciences of the PRC are calculating various options for the formation of the AUG, which may even include landing helicopter-carrying ships of the 071 project.

Berths with a sight

AUG "Liaoning" circled Taiwan at a distance of 90 miles from the coast during the day and arrived at the Yulin naval base (YBC), which is located on Hainan Island in the Gulf of Lyudaohayvan in the resort town of Sanya. It is known that the mooring and onshore engineering structures for the base of the AUG on this naval base were built within two years. However, given the planned increase in the number of aircraft carriers in the PLA Navy, it is necessary to expand the infrastructure. In this regard, the PLA Navy engineering and construction teams are building two new berths for aircraft carriers on the Yulin and Qingdao naval bases.

The second is located in 30 kilometers southwest of the city of the same name in Xiaokouzi Bay. The Chinese military engineers chose a place for the base very well, since from the north the bay was covered with the Dazhushan mountains, holding back the gusting wind, which allows for safe navigation under the influence of the Yellow Sea. Arms warehouses, bomb shelters and other strategic facilities are located under this mountain range, which guarantees protection against air strikes. In addition, in the Dazhushan Mountains, there are positional areas of the anti-aircraft defense missile system C-300, which also cover the base from air attack.

From the ocean side, it is protected by six fairly long breakwaters that divide the water area into two sectors. In the western part (built during the formation of the PLA Navy), four external reinforced concrete piers were erected, which allow approximately 20 ships of different displacements to moor, a separate mooring wall for submarines, two dry docks for repair, maintenance and modernization of ships with a displacement of up to 20 000 tons. For demagnetization of submarines a separate pier is provided. On the outer side of the breakwaters space for hovercraft is provided. In the eastern part of the base there is a berth for an aircraft carrier and ships providing combat training. Chinese media reported on the construction of the second pier.

According to the available information, the third aircraft carrier for the PLA Navy has already been laid down at the shipbuilding enterprise in Dalian. It will most likely be equipped with a nuclear power plant and steam catapults, the design of which is well known to Chinese engineers. It should be noted that a test platform was built in Shanghai for testing the electromagnetic catapult (EMC), following the example of that mounted on an aircraft carrier of the “Gerald Ford” type. Chinese intelligence agencies are closely watching the solution of technical problems on the American ship. According to analysts, the process of adjusting the EHR will cause the next postponement of the acquisition of the latest combat readiness by the newest air station.