Soviet river flotillas in the Civil War. 1918 year. Part of 2 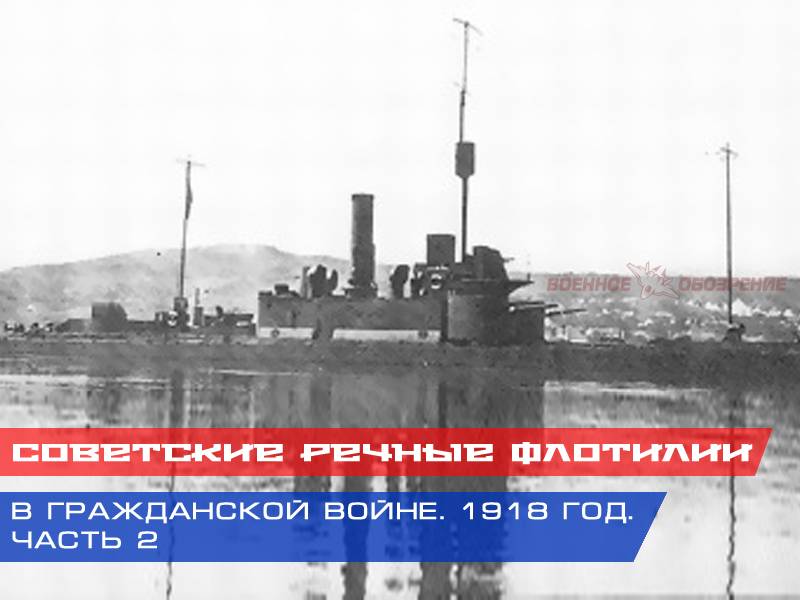 Of interest are the operations of the North Dvinsk flotilla, although they didn’t have such great significance as the actions of Volzhskaya, but still of interest, since her opponent had special military courts (built for operations during the First World War on the Tigris and Euphrates - but in the 1918 campaign they will show themselves did not make it).

In early August, Arkhangelsk, by joint efforts of the British, French and white rebels, was cleared of Soviet troops. The road to Kotlas for the first two weeks was free for them - but the whites at the moment did not have ships for waging a river war and were forced to start creating a flotilla. The Americans were the quickest to orient themselves: having armed several boats with rapid-fire cannons and installing six-inch guns on rafts, they launched an offensive.

The Reds created the 3 gunboats, one of the most powerful tugboats they had available. During this period, hostilities on Dvina were clearly partisan in nature, and neither side had an obvious advantage.

When the White rafts were commissioned by the Whites, the Reds decided to arm their ships with stronger artillery: they began to put 75-mm on gunboats, and 100-mm guns on barges. Now the red side had an advantage: large-caliber guns were mounted on their barges, and besides, towing white rafts was difficult - especially since white had to act against the current. The rafts were inactive. In one of the fights between the red floating battery and the white raft, the latter was quickly destroyed.

In response, the Reds set up a minefield consisting of ball mines of the 1908 model of the year and mines of the engineering department. But not the mines, but the coming winter stopped the movement of the whites.

The difference in the periods of freezing of the upper and lower reaches of the river, which reached seven days, was of great importance for the result of the operation - it forced the whites to remove their ships for wintering in Arkhangelsk before the Reds had to.

1918 was the year for the Northern Dvina to be a prelude to serious future clashes for owning a river. By the autumn of 1918, with the help of icebreakers in Arkhangelsk, considerable white forces were concentrated in: six gunboats built in 1916 and armed with two 6-inch, two 3-inch anti-aircraft guns and six machine guns (14 nodes, 2400 engine l s., displacement 645 tons), six monitors (displacement 570 tons, move 14 nodes), armed with one 9-inch, one 4-inch guns, three anti-aircraft guns and six machine guns.

In addition to the Volga and North Dvina flotillas, in 1918 there was a fairly strong flotilla on Lake Onega. But her hostilities were shackled by White’s success on Dvina, and in 1918, they didn’t matter much.

The experience of hard struggle for supremacy on the most important waterways of the country was used to organize the river war during the 1919 campaign of the year.

The most important in terms of accumulation of experience were the actions of the Volga Military Flotilla. It was recognized that the actions of the flotilla can be both independent and auxiliary character. Independent operations were considered aimed at disorganizing and destroying the enemy flotilla: attacks of ships, setting minefields, etc. In auxiliary operations, the flotilla must support the ground forces with its own artillery fire.

It was recognized that the flotilla should have the following types of ships and vessels: for solving independent tasks, gunboats, reconnaissance boats, barriers and minesweepers; for assistance to the army - auxiliary ships, floating batteries, pontoon and vehicles, balloons and airplanes (used to monitor and adjust fire).

Based on the experimental data of the Nizhny Novgorod military port, it was considered possible to install artillery on river vessels up to 120-mm caliber, and on floating batteries - up to 8-inch caliber. The artillery installed on the gunboats, as the main requirement was the presence of a good rate of fire and long range - at least due to the caliber. The caliber of artillery on auxiliary ships was supposed to be maximum, while the rate of fire for her was not decisive. The arming of floating batteries, intended only for firing at shore targets, should have been based on the same principle as for auxiliary vessels. Boats were subject to arming with mountain guns and machine guns.

Successful use of minefields in 1918 in the river war has attached great importance to them - not only as defensive, but also as offensive weapons. It was considered necessary to include in the flotilla of the detachment minelayers with special devices for dropping mines of the “Rybka” type - this type was recognized as the most successful due to the simplicity of the device and the high speed of mine settings.

The transport flotilla was to consist of passenger and tugboats: these ships did not have special armament, and, if necessary, were armed with machine guns.

The experience of the 1918 campaign of the year in river theaters of military operations had a great significance not only for the subsequent campaigns of the Civil War, but also for the further development of the river military fleets of our country. 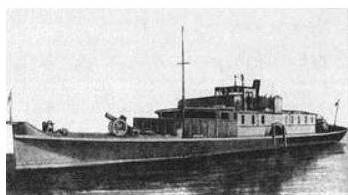