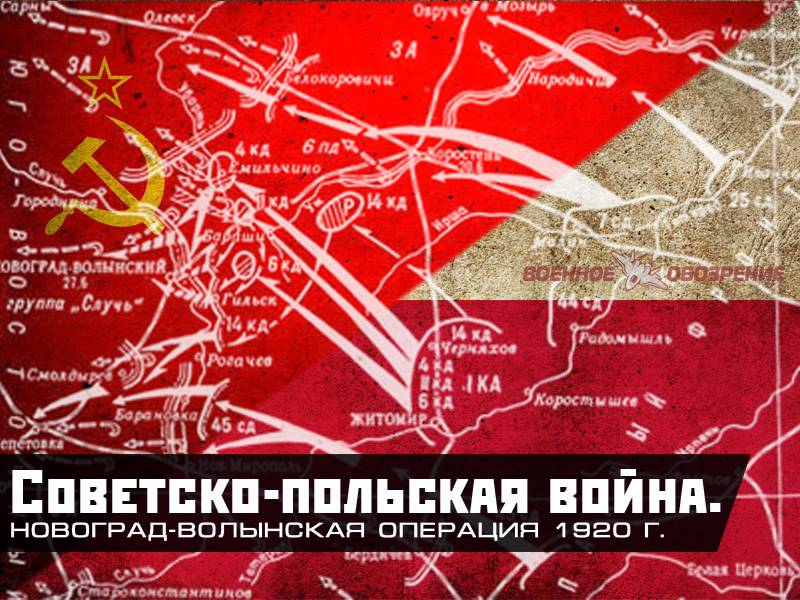 After the breakthrough of the 1 Cavalry Army of the Polish Front and the seizure of the cities of Zhytomyr and Berdychiv, the Poles were forced to leave Kiev and withdraw in the north-western direction - to Korosten and Ovruch. The Polish command sought, above all, to preserve manpower and equipment.

By June 18, the Poles reached the line of Ovruch, Korosten, Novograd-Volynsky and began to consolidate their positions along the r. Already.

1-th Cavalry army to 17-th June was concentrated to the northeast of Zhytomyr - in the area of ​​Annopol - Stone ford - Torchin - High - Chernikhov. 12-I army, its neighbor on the right, went to the line Martynovka - Malin. Left 14-I army moved to the front Berdichev-Vinnitsa.

The area in which the 1 Cavalry Army was to operate during the operation at Novograd-Volynsky was a hilly area covered with forests and cut by many rivers and streams. The river Sluch was a serious obstacle to the cavalry. On the eve of the operation, it rained for several days in a row, which made the roads difficult for its progress. Horse Horse of the Cavalry Army, being in motion since May 25, became overworked. The rear of the association remained in the Uman area, and horses had to be held at the grass. 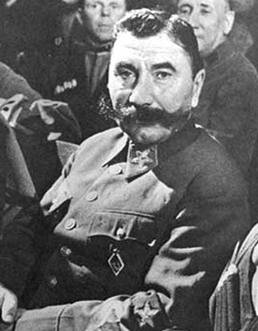 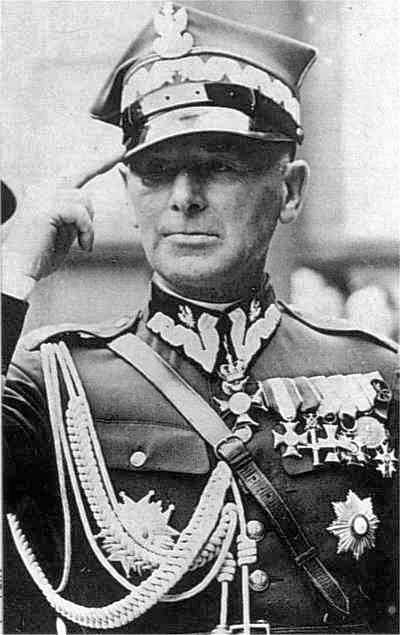 2. General E. Rydz-Smigly, commander of the 3 of the Polish army - the main opponent of the 1 of the Cavalry during the Novograd-Volyn operation.

On June 18, the army field headquarters received an order from the commander of the Southwestern Front. In it, the army was assigned the task: “to assist the 12 Army in eliminating the enemy in the Korosten region, not later than 20. VI to seize the area Novograd-Volyn.

The 12 Army was ordered no later than June 20 to reach the Ovruch area, and the 14 Army, which occupied Gaisin by the end of June 17, was ordered to go to the Zhitomir-Vinnitsa region by June 19. 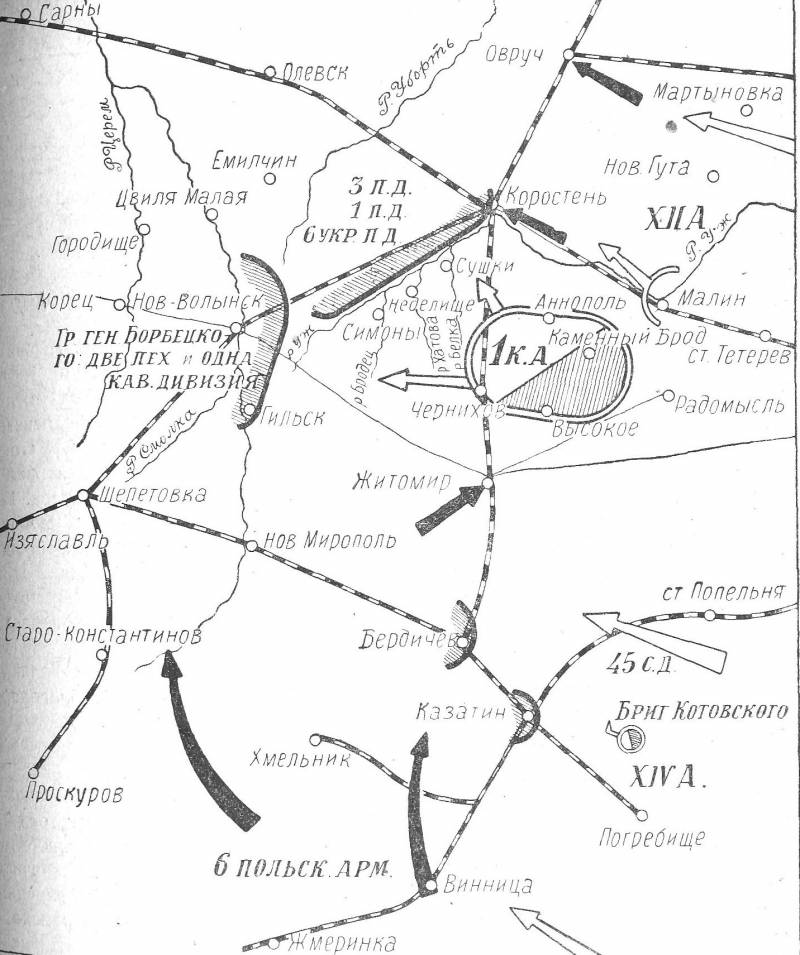 3. The situation to the beginning of the operation.

S. Budyonny directed his divisions, in addition to the 6 th cavalry, north to the Jablonec direction - to bypass the Korostensky center of resistance of the Poles from the south and south-west, simultaneously creating the 6 division threatening Novograd-Volyn from the east.

The Poles firmly entrenched on the river. Oh, having organized a bridgehead on its right bank. Novograd-Volynsky was well fortified, especially its eastern outskirts. On the eve of the operation, the Novograd-Volyn fortifications were examined by Yu. Pilsudsky personally, who gave them a positive assessment. It should be noted that the Poles, leaving the minimum number of troops in the Korosten area against units of the 12 Army, focused on the defense of the rivers Oh and Sluch. Their main task was not to let 1-th Horse, his main opponent, move to the west.

On the morning of June 19, on the first day of the operation, fighting took place on the front lines of the 1 Cavalry Army. By the end of the day, a fierce battle broke out in a forest on the Drying-Neseltische-Simona-Krapivna front.

19 June Soviet units on the river. Already not achieved success and were forced to retreat to the starting position.

At the army field headquarters, a report was received that the cavalry brigade of GI Kotovsky by the end of June 19 had occupied Kazatin. The commander and RVS of the 1 th Cavalry Army decided in the morning of June 20 to resume the offensive and strike the enemy on the Ushomir - Novograd-Volynsky front. 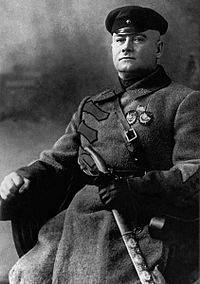 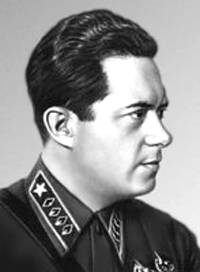 The 45 th Infantry Division of I. I. Yakir was ordered to reach the Zhytomyr-Berdichev-Kazatin front in the shortest possible time.

But at the dawn of June 20, the Poles preempted the 1 Cavalry Army and went on the offensive themselves. Fighting ensued, as a result of which the Cavalry Army was pushed aside to the east. Despite the fact that she already had experience of operations in a wooded and marshland, she could not resist and, by the 23 watch of 20 June, she returned to her original position - to the front Pisarevka - Goroshki - Colonia - Art. Buda - Sokolov.

Throughout the night of June 21, there was a stubborn battle, and during the day the Cavalry Army launched an offensive on all fronts, drove the enemy from their positions and threw them to the r. Already.

At crossings, the Polish units offered strong resistance, but were discarded. By the end of the day, in the field headquarters of the 1 Cavalry Army, it became known that on June 21, Korosten occupied the units of the 12 Army.

SM Budyonny, in order to prevent the Poles from moving beyond the river. Sluch gave an order in which he set the task for his divisions: “shoot down the enemy on the r. Oh and force the river. The case at the site Zvil Malaya, Gorodishche, Novograd-Volynsk.

By the end of June 22, the Budennovsk units managed to bring down the Poles from the r. Already. The 4 th cavalry division in the equestrian line attacked the 3 th division of the legionnaires and almost completely knocked out the 9 th infantry regiment. The 34 th cavalry regiment of the 6 th cavalry division that day also in a horse attack in the Yablonoe area destroyed the 2 infantry battalion. The army field headquarters received many prisoners and trophies (including machine guns and an artillery battery).

23 June, 1-I Cavalry Army began to force the river. Case The Poles resisted stubbornly, but despite this, the 3 Brigade of the 6 Cavalry Division, having crossed at Alexandrovka, broke into Novograd-Volynsky in 15 hours. But due to the small number of Soviet troops on the left bank of the r. Sluch also because of the strong artillery fire of the Poles, the brigade was forced to leave the city and depart.

23 June under the onslaught of connections 1 th Cavalry Army Poles were forced to clear the right bank of the river. Case

Moreover, parts of the Cavalry Army as the river. Oh, and on the river. Sluch had to fight, acting both on horseback and on foot. Polish troops had serious wire barriers, full profile trenches - remaining from the times of the First World War and updated by Polish engineers.

24 June 4-I cavalry division, operating on the right flank of the Cavalry Army, occupied Emilchin by the end of the day, capturing 500 infantry and seizing 7 guns and 36 machine guns. Emilchin several times passed from hand to hand.

The Poles, fearing a detour from Novograd-Volynsky from the north, concentrated against the 4 Cavalry Division to the 6 infantry regiments and the 3 cavalry regiment. Despite the bloody battles, it was not possible to take Novograd-Volynsky on this day with frontal attacks, and the Soviet divisions remained in their original position - in 4 - 6 km east of the city. The commander of 1-th Horse, taking into account the situation, made a regrouping of his troops.

In the order for 26 June the following tasks were set for the army units.

The 4 Cavalry Division was entrusted with the operation from the north, occupying the area between the Sluch and Ubart rivers - along the Andreyevichi line, Art. Rykhalskaya, Bogolyubovka. The 11 Cavalry Division, reinforced by a heavy artillery division, was tasked with attacking Novograd-Volynsky from the east - on the Rzhadkovka and Lubchetsy front lines. The 6 and 14 cavalry divisions, which were the shock group of the army, were ordered to force the Sluch and Smolka rivers in the Gilsk region and capture Novograd-Volynsky from the south. A special brigade made up an army reserve and was located in the Romanovka area, while the group of I. I. Yakir was given the task of attacking Rogachev, N. Miropol and Shepetivka.

At dawn of 26, the cavalry divisions began to perform assigned tasks.

The 6 th and 14 th cavalry divisions in a stubborn battle near the village of Gilsk chopped up 1000 enemy fighters and captured another 500 man, as well as captured 2 batteries and several dozen machine guns. By the end of the day, these connections managed to seize the crossings through Sluch - in the Gilsk-Rogachev area.

The 4 Cavalry Division fought north of Novograd-Volynsky, and by the end of the day captured the crossing of the Sluch u Chizhevka.

The 11 Cavalry Division occupied positions on the right bank of the river opposite Novograd-Volynsky, and the advancing units of the 12 Army moved to the Gorbov-Emelchin-Kuleshi line, while the 14 Army troops approached Starokonstantinov.

June 27, on the last day of the operation, fierce battles flared up on all the combat sections of the army. The Poles went over to counterattacks, but the 1 divisions of the Cavalry Army managed to break down the enemy’s resistance during the heavy fighting - the attack group advanced on Novograd-Volynsky from the south and south-west, and parts of the 4 cavalry division took the crossing over the Cere near the Settlement and began to threaten the city from the north.

Thus, the city was covered by the 1-th Cavalry Army from three sides: from the north, from the east and from the south.

The Poles persistently defended Novograd-Volynsky, but the city was taken by 1 hours of June on the 14 hours by the heavy attack of the 27 divisions.

Despite all the tactical and operational difficulties in its implementation, the Poles did not withstand the onslaught of the Cavalry Army units. Leaving many captives and vehicles in her hands, they retreated to the Koretz - Bereztsov - Shepetovka line.

Group I. I. Yakir to the end of June 27 th forced the river. The case at the site Baranivka - N. Miropol and moved to Polonnoe. 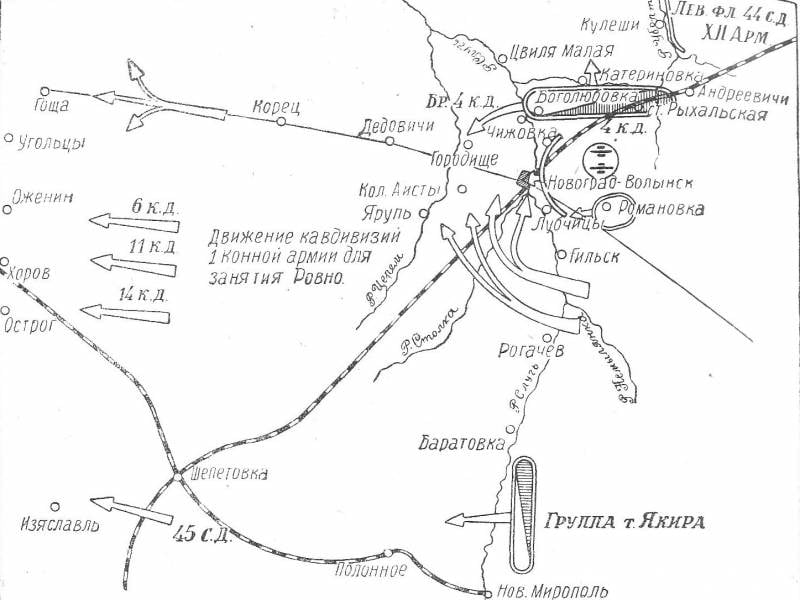 6. Completion of the operation.

In the period Novograd-Volyn operation 1-I cavalry army, despite the resistance of the Polish units and despite the difficulties, overcame all obstacles and defeated the enemy.

Under Novograd-Volynsky and on the river. The captive army captured prisoners from 6, 7, 8, 9, 12 and 20 infantry regiments (parts of 3, 6 and 7 infantry divisions), and also from the 9 th hussars, 3 th Uhlan and 11 th cavalry regiment.

The specific conditions of the terrain affected the operation: a wooded and marshy region, carved by rivers and streams, did not allow cavalry to use the element of surprise, favoring the defenders.

Crucial in the course of continuous 9-day battles was the bypass movement of the shock group of the Cavalry Army, two divisions of which decided the fate of the operation.

Ctrl Enter
Noticed oshЫbku Highlight text and press. Ctrl + Enter
We are
Kiev battle. 1920The internal springs of the Soviet-Polish war
20 comments
Information
Dear reader, to leave comments on the publication, you must to register.