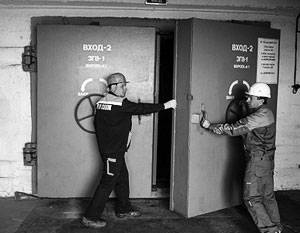 For the first time in several decades, the United States has been concerned with how much Russia's leadership is able to “survive a nuclear strike.” Of course, all such information relates to the highest state secrets - and yet some assessments of how able Russia is to withstand the use of nuclear weapons. weapons, quite possible.


US intelligence and the Strategic Command of the country's Armed Forces (STRATCOM) are assessing the ability of the leadership of Russia and China to "survive the nuclear strike," Bloomberg said on Monday.

The analysis, conducted at the request of the US Congress, was begun even before Donald Trump assumed the presidency. Then this idea was supported by the leaders of both the Republican and the Democratic parties, expressing a lack of confidence in the Russian authorities and concern about China’s growing confidence in its military power. The analysis will include "the location and description of underground communications of political and military importance", - transfers RIA "News».
However, on Friday, Trump also ordered the Pentagon to prepare a new document, the Nuclear Policy Review, to guarantee the state of its nuclear deterrent forces at the proper level, so that these tasks overlap. It is noteworthy that earlier Trump warned about the possibility of lifting the sanctions against Russia in exchange for a bilateral agreement on the reduction of nuclear weapons.

The life support system of up to three months

The president of the Academy of Geopolitical Problems, Colonel General Leonid Ivashov reminded the newspaper VIEW that as early as the beginning of the 1970s, “when the American threat hung over the USSR, we created the Perimeter system (in the West it was called the“ Dead Hand ”). This is a system of a duplicate command post that would give the launch command directly to the missiles according to a given program, even if the top leadership of the country was killed. ”

As you know, at the beginning of 1970, China’s leadership seriously feared a nuclear war with the Soviet Union. “As for the capabilities of China’s anti-nuclear defense, under Mao there was no serious defense,” notes Ivashov. “The Chinese simply built shelters for members of the politburo, and even for the municipal government.”

In 1981 was only taken over as US president, Ronald Reagan received a report from the CIA director about the ability of the Soviet people and the government to survive as a result of catastrophic climate change in the world, as well as a nuclear attack, recalls Ivashov.

“The Americans considered that the USSR is the most stable state in this respect, especially such regions as Siberia, Altai, Kazakhstan. Therefore, then Reagan decided on the 10-year program for the destruction of the USSR. The question of a preventive nuclear strike with the subsequent resettlement of Americans into our territories was considered. They found weak spots. Our intelligence became aware of this, and we began to rapidly build shelters for workers and leaders, especially under General Secretary Andropov. The Grotto system (bunkers) appeared for the political leadership, including in the Moscow region - for the leadership of the Armed Forces, ”the colonel general said.

In 1983, Reagan received a new report that said that the Soviet strategic management system was more stable than the American one. As Ivashov noted, the Americans built entire underground cities in case of a nuclear attack. “Then they came to the conclusion that it was not a nuclear war or war as such that should be waged against the USSR, but to destroy the country with the help of“ soft power. ” I do not rule out that such studies are conducted regularly as part of a nuclear review, ”the expert says.
He recalled that the development of the Soviet system of protection against a nuclear strike in Russia began under President Boris Yeltsin. According to him, the system was created not only for management, “oligarchs have already been registered there”. Then "a lot was done" under Vladimir Putin - "in particular, life support systems were upgraded for up to three months." According to the general, after the nuclear review of 2000, the Americans adopted the concept of a fast global strike, as a result of which they essentially stopped upgrading strategic nuclear weapons, “but focused on the concept of a high-precision strike followed by the use of nuclear tactical means. At the same time, the program of the global missile defense system was adopted. ”

“According to the results of the last review, Trump will report. Perhaps the adoption of significant measures against the control system of Russia. I think it will not be a disarming nuclear strike, because for the time being we can respond with something. But it can be a cyber-shock on management systems, on the financial and banking system, and on other vital areas. Plus, the Americans will develop robotic technology. We'll see, ”summarized Ivashov.

The head of the Center for Military Forecasting, Anatoly Tsyganok, recalled that the CIA, the Pentagon and other American intelligence services had been monitoring the situation in the USSR since the 1950s. “Before 1961, the United States planned to strike at 10 main facilities in Russia. Among them: Moscow, Novosibirsk, Tyumen, Sverdlovsk (now - Yekaterinburg). But after 1961, the question of whether to strike was simply not the case. Already then it became known that in the USSR there is a system that, regardless of who puts a nuclear strike on its territory, strikes a retaliatory nuclear strike on the aggressor, ”Tsyganok told the newspaper VZGLYAD.

He expressed confidence that the initiator of such a test was not the new US president. “Everyone understands the danger of nuclear war. It should be borne in mind that on Earth only the United States and Russia have 90% of nuclear bombs and equipment, ”the expert reminded, adding that information about such inspections is being sent to the press about every five years when American intelligence agencies are trying to find more threats from Russia .

The head of military policy sector and the economy RCI Ivan Konovalov also recalls that the survival of the country's leadership in normal times is provided in full, however, a potential aggressor might try to strike a sudden blow at a time when a large part of the manual will be in an unprotected place.
“All nuclear powers, especially the leading ones, have corresponding life support systems for statesmen if the scenario develops along a critical path. But the effectiveness of a nuclear strike may largely depend on where the country's leadership will be at the moment. For example, if someone decides to strike, when will the Olympics open? Or, for example, the anniversary of the Allied landings in Normandy, where the heads of several states gather. Imagine that at this moment a blow is struck there, ”Konovalov told the newspaper VIEW.

Former deputy commander-in-chief of the Russian Air Force, retired Lieutenant General Aytech Bizhev, in a conversation with the newspaper VIEW, stated that the country's anti-missile shield also provides reliable protection to the leadership. “There is an anti-missile defense system, a missile attack warning system. Not a single movement of the strategic nuclear forces of the opposing side, not a single training start-up can be disregarded by the Air and Space Forces of the Russian Federation, ”said Bizhev.

“Accident and suddenness are one hundred percent excluded. The work of the engines of strategic missiles is already fixed. Why pre-announced areas of exercise? To warn neighboring countries, so that they do not think that the fighting begins. Israel once launched missiles from submarines without warning. We immediately fixed it, and Russia immediately demanded to clarify what was happening, - said Bizhev. - Triple control. We have a rocket attack warning system - over-the-horizon location. Plus, all this is duplicated by the orbital group in space. "

Data on bunkers for the country's leadership in the event of a nuclear war are classified as military and state secrets. All secret bunkers and even cities are supervised by the FSB and the Main Directorate of Special Programs of the President of Russia. However, some objects of the Soviet era in recent years have been declassified, in particular some “secret metro” stations, including the so-called Brezhnev bunker or GO-42 on Taganka in Moscow, which now has a museum. The object was conceived as an anti-nuclear refuge for the first persons of the USSR. The bunker, located at a depth of more than 50 meters, was commissioned in 1956, but by that time it was decided to build another shelter for the leadership of the country, and the command post of the far aviationwhich operated there until 1986. It is also known that under the buildings of the Ministry of Defense and the Commander-in-Chief of the armed forces there are also multi-story underground structures, but they are not accessible to outsiders.

The scant information about bunkers leaked to the press from the declassified KGB archives. For example, in the metropolitan area of ​​Ramenki, between Moscow State University and Udaltsov Street, there was an underground city for 15 thousand people. It had its own system of electricity, sewage, water supply and air. 60 kilometers from Magnitogorsk is the mountain resort of Abzakovo, in the mountain Yamantau is the underground residence of the president and the military headquarters. At the same time, the official status of Yamantau is a repository of state values.