Flight of the Seagull (about Lisa Chaikina)

February 1 2017
17
In the name of the Hero of the Soviet Union Liza Chaikina (Elizaveta Ivanovna) the streets of different cities of our country are named. This name can be read on many ships. There is a wonderful poem by M. Komissarova and a novel by N. Biryukov. And yet you ask many people - they will not answer who it is. Therefore, let us once again recall the feat of this young woman, Komsomol member, librarian, journalist, partisan. 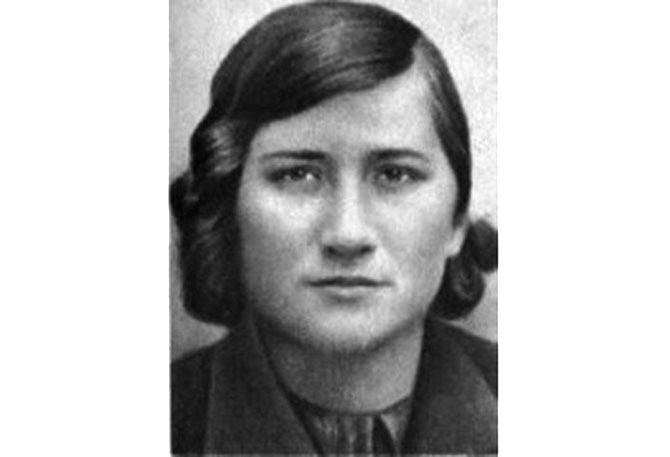 When, in 1933, in the village of Runo, Penovsky District (this is on the territory of the present Tver Oblast), the reading room was left without a head, there was practically no question of who to choose. In the village, everyone knew that fifteen-year-old Lisa Chaikina reads a lot. You can say the girl did not miss a single printed word. While still in school (in the neighboring village of Zalesye, Lisa graduated from four classes), with the question “Could you give me a book?” She approached each teacher, perhaps. Everyone gave, of course. It's amazing how Lisa found time to read? Her family is peasant, big, her father was contused. Every minute we need hands. And after all Lisa had time! Sowed, stings, myal flax, worked on the house. In her village, it was she who gathered the boys and girls and created the first pioneer squad from them. Even the guys stitched ties.

To say that Lisa was happy to become a manager is just to remain silent. She disappeared at the new place of work around the clock. Every day I organized reading aloud evenings, collected both children and adults. If the audience were children, after reading they never left just like that, in silence. Lisa pushed them to talk, discuss what they learned. She told about other books, about their authors. She taught the children to understand that behind each work, whether it is a fairy tale or a documentary story, there must be some real events that occurred in the life of the writer. Yes, these events can be transformed, embellished, disguised, but they are. So, any book can be a teacher of real life.

Here, at the hut, Liza opened several circles at once: agronomic, musical, dramatic. Not only children visited them, but also adults.

Then Lisa was appointed an accountant on the collective farm. She coped with this, the numbers in her hands were obedient and accurate. But still the girl was attracted by the printed word. And she went to work in the newspaper "Leninsky drummer", where she worked for several years.

And soon the Great Patriotic War began. Together with other volunteer girls, Lisa built defenses. And at the same time engaged in harvesting bread. The enemy was coming closer, it became clear that our soldiers could not hold him. Lisa organized in the village a detachment of seventy people. She herself learned to shoot a rifle brilliantly, she knew how to handle a machine gun as well.
In October 1941, our units went to Ostashkov. Lysine squad became a partisan and began to act in the rear of the enemy. They organized sabotage, distributed leaflets, were the eyes and ears of our Red Army men. Liza knew the terrain perfectly and went on assignments more often than others. Her courage amazed. So, once she from under the nose of the Germans hijacked a truck with food (later it turned out that the documents were hidden in it). But at the same time before the girl drove the car only about two times!

It is no exaggeration to say that almost all the leaflets pasted on the streets of several villages were the work of Liza. She remembered the evenings in the reading room, like no one else understood the meaning of information. Moreover, the fascists declared: Moscow has fallen, the war is about to end ...

In the villages, Chaika (everyone called Lisa) was loved and waited. However, there were three traitors who told the fascists that they needed to look not for a group of men, but for an inconspicuous girl Lisa. The enemies announced the reward, but the partisan was very careful. She did not stop work for a single day. Once a leaflet appeared even on the enemy headquarters, where in those days for punishment brought residents who did not pass the products. Once Lisa ran into an ambush. Coolly shot three gendarmes and fled.

This continued until the end of November 1941. 22 November Lisa went to explore. But the task took her a lot of time, and the girl decided to spend the night in the village. She stayed with a friend Marusya Kuporova in the Red Ride Riding Farm. I thought that I had slipped imperceptibly, but I was mistaken. They were seen by a groom, one of the traitors (previously convicted for theft). Bore the fascists. And at night, when in the hut Marusya already went to bed, the enemies broke here. Marusia, her mother and brother were shot on the spot. And Lisa in one dress, barefoot drove in Peno, in the headquarters. The girl still had a chance to escape: the groom did not recognize her and only reported that a stranger appeared on the farm. Therefore, the Nazis still did not understand that before them - the very Lisa. The guerrilla itself did not say anything even under torture. And the tortures were inhuman: the invaders tore out nails and hair, beat them with ramrod, poured boiling water on his head, and burned his heels. Lisa was silent.

In the morning she was taken to the center of the village, where the locals had already been driven. The villagers were ordered to give the girl's name, if she knew them. Everyone knew Lisa, but the people were silent. Only one villager (I do not know if she was among those traitors) said: “But who does not know her? This is Liza Chaikina, Komsomol leader! ”!

On the same day, Lisa was shot. But before she died, she still spoke. "Victory will be ours! Ours will come! ”- that’s all that the enemies of the twenty-three-year-old heroine have achieved.

... Victory Day has come. And on the Reichstag next to the others appeared the inscription: "Our Lisa". Made her Komsomol 705-th regiment Nikolai Belyaev, an old friend of the girl.