No money, no reservation

January 27 2017
23
Not so long ago, the General Staff of the Armed Forces of the Kingdom of Thailand made Ukraine the last "Thai" warning, stating that if all contract Tanks Oplot will not be delivered by the Ukrainian manufacturer, then official Bangkok will be forced to revise the agreement and refuse to cooperate in the military-technical sphere with Kiev. At least that’s how, referring to representatives of the general staff of the country, the Thai press reported. In Ukraine, this news caused a big stir, and the stir was not connected with the fact that Kharkov tank builders could not fulfill their contractual obligations, but with the fact that such statements allegedly constitute an impudent lie and an attempt to blacken the Ukrainian “competitive” defense industry.


In the Ukrainian media, there were comments by representatives of the Kharkov plant named after Malyshev, who said that "information warfare is being waged by competitors against them." It was announced that the information war are materials in the press of Thailand, namely in one of the largest editions of the kingdom - “Bangkok Post”. At the same time, the leadership of the Ukrainian plant did not say who became the “customer of the information strike” in Ukraine in the Bangkok press. Chinese competitors? Or is it all again in the "Russian hackers"? ..

In general, the information impact on themselves was declared, after which they promised that, albeit with a delay, they would close the contract to Thailand - until the autumn of 2017.

Against this background, information emerged from the press service of the Ukrainian state concern Ukroboronprom in fact about the next “zrade”, which is indirectly related to the supply of Ukrainian equipment abroad. "Zrada" is that, reporting on deliveries (completed, current and future) to foreign customers, Ukraine itself does not receive new military equipment. More precisely, he gets it, but by no means in the volumes that are usually loudly announced by the Supreme Commander-in-Chief Poroshenko against the background of freshly painted Soviet-made armored vehicles. Read more ...

"Ukrooboronprom" with pompousness said that while the country is under the "information blow" of the Thai press and competitors in the production of armored vehicles, Kharkov manufacturers are doing their job. In particular, it was reported that GP Morozov’s Kharkiv Design Bureau for Mechanical Engineering transferred five BTR-4Ms to the Marine Corps of Indonesia. 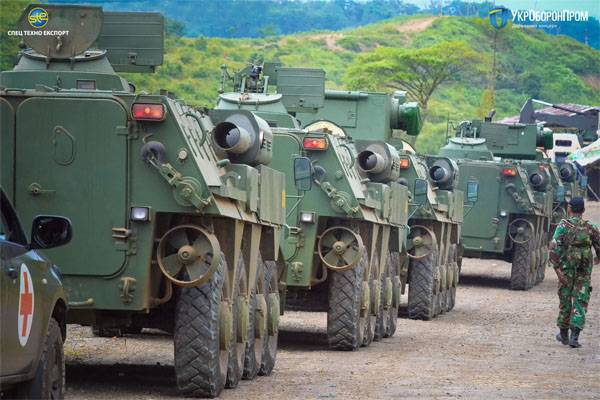 It was stated that the Indonesian side "highly appreciated the capabilities of the Ukrainian armored vehicles", in particular, its high amphibious properties. 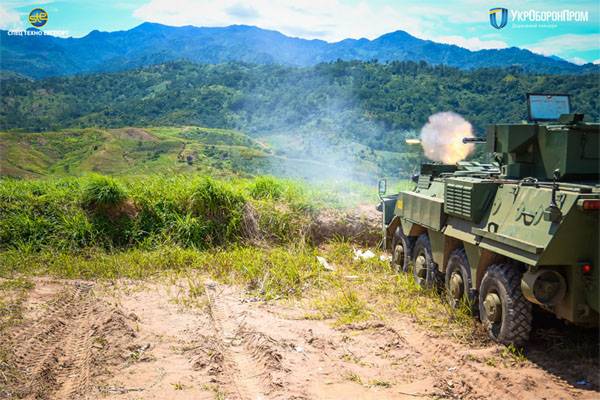 And it is here that the above mentioned "Zrada" is found. Exactly the same office - "Ukroboronprom" - through the mouth of its own press service on its official website reports that the Ministry of Defense, it turns out, does not have "pennies" to equip the Ukrainian armed forces with a sufficient number of armored vehicles. How not? Well, just what they themselves said - "sent to Indonesia after their shipments ..."

It turns out that everything is not quite so, but rather not at all.

Of material:
The Ukrainian military do not receive modern Oplot tanks, Dozor-B armored vehicles and other new equipment due to underfunding. Due to the lack of state funds, Ukroboronprom will have to send the majority of the staff of the Lviv armored plant on unpaid leave. Today, the capabilities of Ukrboronprom are several times higher than the capabilities of the state budget of Ukraine. So, we fulfilled the state defense order for 100%, that is, we gave the army everything that it ordered. But let's be honest: our GOZ is several times less than the amount of funds provided for by the development program of the Ukrainian defense industry complex. In simple terms, the state is capable of covering only minimal needs, without investment in production, without investment in technology. 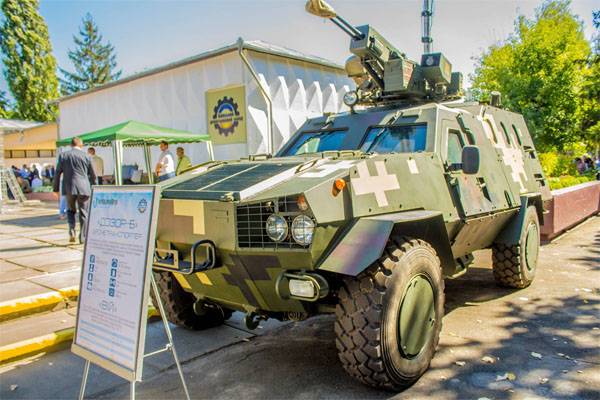 Further, the management of Ukroboronprom finally stands on the “evil” path, allowing itself in a terrible way, namely: a comparison of the defense budget of Russia with the budget of Ukraine ...

From the statement:
For comparison - the defense budget of Russia is almost 50 billion dollars, it is the most consolidated budget of Ukraine.

Attention is drawn to the fact that such a statement is being made by the PUBLIC concern of a country whose authorities constantly declare that “Russia is waging war against Ukraine.” And it “leads” in such a way that if Russia has a defense budget comparable to the Ukrainian consolidated budget, ukrovoyaki in leaky berets and with Soviet-made machine guns digested by “volunteers” and jumping transformer mortars surprisingly “hold back the Russian hordes”, still managing to This move in the "gray" zones ... The answer from Kiev is: "Tse patriots!" "Ukroboronprom" is not so positive with respect to "Ukrainian patriotism."

In the Ukrainian segment of social networks is even less positive in this regard. Patriots, they say, patriots, but where, Pyotr Alekseevich, those means of military aid, which were reported to the fanfare? We are talking about getting Kiev 110 millions of dollars in military aid over the past three years. First-aid kits, camouflage, snacks and medical equipment with bandages and iodine are all great, and where is the “armor”? Well, they say, the West seems to be worn with a ban on the supply of lethal weapons, but where did the funds from the pretty bloated Ukrainian military budget — the budget of “one of the strongest armies of the continent” go? Where, they say, "Strongholds" and "Dozory-B"? ..

And here "Ukroboronprom" has to make adjustments to their own materials. Against the background of everything described above, a statement by the concern’s leadership appears, explaining to citizens “why it’s better to sell weapons abroad.” "Clarification" it looks like this:
Each tank sold for export is a few tanks for our army at the expense of taxpayers in other countries. This simple axiom to remember everything. Export allows us to scale production, invest in new machines, train people, raise their expertise. Criticize Only the ignorant and outspoken enemy of Ukrainian independence.

The question arises: how many new machines have appeared at the Ukrainian defense enterprises in the time that has passed since the day of the "peremoga" on the Maidan? How many times has production been "scaled" since then?

So, what he wants to say with his contradictory wording “Ukroboronprom”: he would be happy to supply equipment for the Armed Forces of Ukraine, but the state budget does not allow to conclude contracts with manufacturers. Orders are not enough, and the potential of the factories is hoo ... Such that Thailand can be supplied with “Strongholds” in no way in the required quantity and on time. At the same time, in order to allow the state budget to make purchases “for oneself”, armored vehicles are sold abroad ...

It is in such a closed circle that they exist: for oneself - there is no money, and for foreign customers there are no opportunities. As a result, all hope is again on the volunteers with their wunderwallers to resist the "terrible Russian aggression" ... Well, also for loans from the "partners", then to drink cocktails with umbrellas in the same Thailand against the background of further "scaling production" .. .