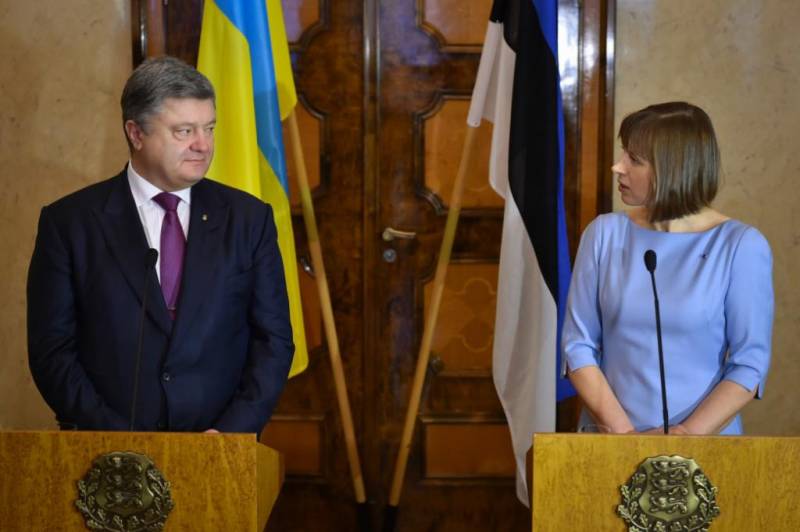 US President Donald Trump could not influence the Russophobic policies of the Baltic region. During the visit of President of Ukraine Petro Poroshenko to Estonia, the head of the republic, Kersti Kaljulaid, assured official Kiev of maintaining a tough political course towards Moscow.

In the first place, according to Estonian politicians, Russia is a threat to Europe in the light of the conflict in the Donbas. According to Prime Minister of the Republic, Chairman of the Center Party, Jüri Ratas, and Speaker of Parliament, member of the Social Democratic Party, Eiki Nestor: “Estonia is undoubtedly one of the states that consider stable international support to Ukraine, which is following the path of democratic reforms, important. Part of this is the cessation of the Russian aggression in eastern Ukraine and the observance of the Minsk agreements, said Nestor. Until this, it is impossible to discuss the easing or lifting of sanctions. Kiev should be able to regain control of its territory. ”

Note that the rhetoric of the Baltic politicians has not undergone fundamental changes since 2014. The only length of time when the leaders of Latvia, Lithuania and Estonia noticeably reduced the number of harsh anti-Russian statements, was the period of the election campaign of the current US President Donald Trump. In the course of it, the politician repeatedly threatened to disband NATO, and also leave the Balts without military assistance from the United States. In this regard, the heads of the republics slightly restrained their Russophobic fervor, knowing that hatred of the Kremlin, against the background of Mr. Trump's desire to come closer to Moscow, may not play into the hands of local political elites.

However, as soon as the newly elected president of America took up his duties, the anti-Russian foreign policy of the post-Soviet republics returned to normal. The light in the tunnel of constructive mutually beneficial relations with Russia went out, barely having time to ignite. The situation is overshadowed by the fact that in the second half of 2017, Estonia will become the Presidency of the European Union. This will allow it not only to initiate individual issues of a pan-European discussion, but also to block the relevant decisions. Thus, a principled Tallinn in pursuing an anti-Russian foreign policy can significantly strengthen Russophobic rhetoric in the corridors of EU power. This statement confirms the statement of Estonian President Kersti Kaljulaid that the authorities of the republic will insist on strengthening sanctions against Russia until it stops threatening the security of European states. And, naturally, none of the leaders of the Baltic states think that, trying to please their patrons by initiating a tougher sanction policy, the authorities of Latvia, Lithuania and Estonia are increasingly plunging the population of their countries into all-consuming and irrevocable poverty.