Arsenals for the radicals

January 28 2017
11
Pakistan, which gained its statehood in the 1947 year, being populated predominantly by Muslims, almost immediately found itself in confrontation with India.


Between these countries there were two more "big" wars and smaller conflicts. The parties still have significant territorial claims against each other, primarily in Kashmir (in the north of both countries). This confrontation determines the military construction in Pakistan throughout its stories. In particular, it was to deter India that their own nuclear weapons were created. weapon and means of delivery.

For half a century, Islamabad has been a strategic ally of both Beijing and Washington. It was China and the United States, as well as France, that became the main suppliers of military equipment to Pakistan. This situation persists to this day, however, Islamabad is gradually leaning toward Beijing. According to Chinese projects and licenses in the country are produced Tanks and fighters, military boats are being built. An active participant in this cooperation is Ukraine, which supplies various components for joint equipment, in particular engines. Due to the secrecy of data on the production and procurement of new weapons and the pace of the withdrawal of old, the amount of equipment in the armed forces of Pakistan is known only approximately.

Islamabad has a very large influence on the situation in neighboring Afghanistan, largely controlling the Taliban movement.

The ground forces are organizationally divided into nine army corps, three corps-level commands and a group of SSOs.

At present, strategic commands are being formed on a geographical basis (Northern, Central, Southern, Western, Eastern), but their structure is not well-established. Apparently, the Northern Command will include 1 of the AK, Central - 2, 4 and 10, Western - 11, AK, Eastern - 30, South, 5, 12 and 31 y. 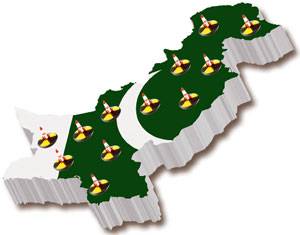 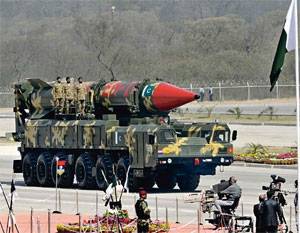 The Pakistani Navy has 5 French Agosta submarines (2 older Agosta-70 Hashmat, 3 newest Agosta 90B Khalid) and 3 Italian sabotage SMPL Kosmos MG110. With the submarine "Khalid" it is possible to launch the Babur-3 SLCMB.

From 9, the newest Azmat type 2 missile boats were built in China, 3 Jalalat and 2 Jurrath in Pakistan according to Chinese projects, 2 MRTP-33 in Turkey. There are 8 patrol boats: 1 "Larkana", 1 "Rajshahi" (of the "Town" type), 2 MRTP-15, 4 "Barkata" (in coast guard). In the 3 minesweeper type minesif (French "Eridani"). The landing force consists of 4 English Griffin-type air cushion boats.

Given the possession of nuclear weapons and their means of delivery, as well as a sufficiently high level of combat and moral and psychological training of personnel of the armed forces of Pakistan can be considered the strongest in the Islamic world. Nevertheless, they are significantly inferior in their potential to the Armed Forces of India (“In a healthy Delhi, a healthy spirit”). To deter Delhi from attempting to defeat Islamabad its own nuclear arsenal and close alliance with Beijing help.

There is a chance, albeit small enough, for Islamic radicals to come to power in Pakistan, who in this case will have access to the country's nuclear missile arsenal, which will pose a threat to all of humanity.

Pakistan does not border with Russia and is generally quite far from it, nevertheless it is our long-time, tried and tested enemy from at least the time of the Afghan war. The most obvious threat from his side today is support for the Taliban, who, after the withdrawal of NATO members from Afghanistan, could create major problems for us in Central Asia, and in the worst case - on our own territory. The threat is almost as obvious - the aforementioned probability of Islamic radicals coming to power in Pakistan. Pakistani missiles do not reach Russia yet, but new samples with Chinese help are being developed very actively. Their next generation will already reach Siberia and the Urals. It should be understood that, unlike the current Iranian authorities, the Sunni radicals, they get access to nuclear missiles, are quite capable of taking steps of a frankly suicidal nature. Suicidal terrorism is a purely Sunni offspring, and if individual individuals are engaged in self-exploitation on a massive scale, no one said that the whole state cannot go for it.

However, even present-day Pakistan, in which the radicals have not yet come to power, almost does not hide its readiness to sell nuclear charges to Saudi Arabia for the Chinese Dongfeng-3 missiles available to Riyadh, which are already capable of reaching southern Russia. At the same time, in Saudi Arabia (“A kingdom without a king in the head”), the Wahhabi radicals are essentially in power now.

It is necessary to note one more point on which we decided to close our eyes. Since the time of our Afghan war, the informal axis of Beijing-Islamabad-Riyadh has emerged from the anti-Soviet coalition of that time, to which Ankara is now increasingly attached. Pakistan is the most important link here, both geographically and politically. In particular, Pakistan created nuclear weapons mainly on Chinese technology and almost exclusively on Saudi money. For several decades, this axis was not very noticeable. But for us it is fundamentally hostile, regardless of the current relations of the countries of this “quadruple alliance” with the United States. Unfortunately, not everyone understands this in Russia.