News about the modernization of the missile R-30 "Bulava"

January 26 2017
90
New details of the planned development of strategic nuclear forces have become known. The development of nuclear delivery systems continues. weapons, for which purpose this time it is proposed to modernize one of the recently adopted models. According to the latest domestic media reports, an updated version of the P-30 “Bulava” ballistic missile should appear in the foreseeable future, differing from the basic version by a significant increase in the main characteristics.


Assumptions about the possible modernization of the newest domestic ballistic missile of submarines appeared earlier, but this time the press revealed possible technical features of the future weapon upgrade. 23 January has published an online edition of Lenta.ru. From an unnamed source in the domestic defense industry, journalists from the news portal managed to get certain information about current plans to modernize missiles.

According to Lenti.ru, the main requirements for the new project concern an increase in the flight range and payload mass. To solve both such problems, it will be necessary to revise the body of the product. As a result, the upgraded Bulava will be larger and heavier than the base-level rocket. The D-30 missile system has a certain potential for fulfilling such requirements. In particular, the question of some changes in the architecture of the complex in order to increase the space available to accommodate the missiles is being considered. 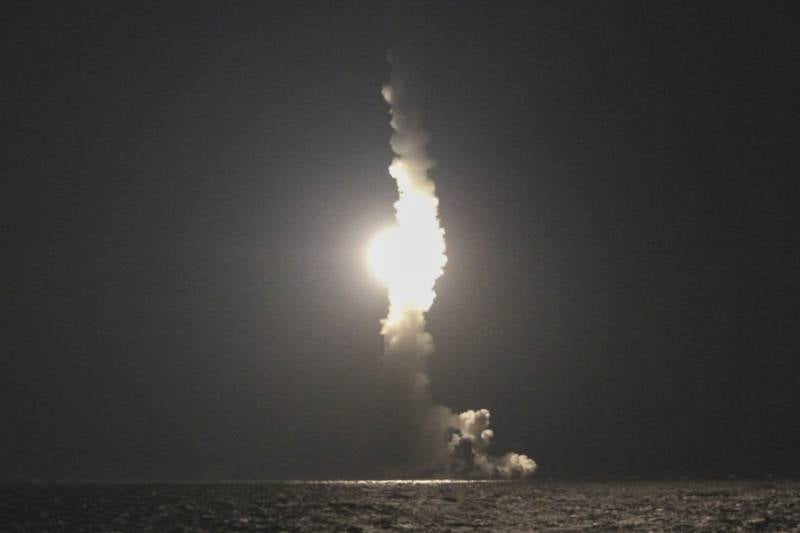 The source "Lenti.ru" noted that the possibility of increasing the rocket without the need to process the submarine carrier can be realized by refusing to use the transport and launch container. In the existing complex, the rocket is transported in a special container, which occupies part of the volume of the silo launcher. The rejection of this product, in turn, will increase the size of the available mine.

Increasing the size of the rocket will allow an appropriate increase in the charges of solid fuel of its engines. Changes in the energy performance of the product will provide an opportunity to increase the flight range to 12 thousand. Km. At the same time, the payload of the upgraded Bulava will be more than twice as high as the corresponding parameter of the base rocket.

"Lenta.ru," referring to its source, writes that the upgraded version of the D-30 missile system in the future may become the main weapon of promising submarine cruisers. At the end of the twenties, the construction and development of strategic design submarines could begin, the main task of which will be the replacement of obsolete ships. In particular, these submarines will be able to replace the boats of the project 667BRDM, which by then due to moral and physical obsolescence will have to lose their potential.

Recall the strategic missile system D-30 with a ballistic missile R-30 "Bulava" was developed since the late nineties and was intended to upgrade the naval component of the strategic nuclear forces. Submarines of the Borey 955 project were considered as a carrier of promising missiles. Since the middle of the last decade, a new type of rocket has been used in tests conducted with the help of the modernized Dmitry Tn-208 submarine Dmitry Donskoy. After a significant number of test launches, the D-30 rocket complex with the P-30 rocket was put into service. Currently, mass production of missiles is underway and the construction of their carriers continues.

According to known data, the P-30 product has a length of about 12 m with a maximum diameter of 2 m. The launch mass is at the level of 38,6 t. The rocket is built according to a three-stage scheme and is equipped with solid propellant engines. The drop weight is determined at the level of 1,15 t, which allows you to install on the head of up to ten warheads and means of overcoming missile defense. Flight range, according to available information, exceeds 8 thousand. Km.

The regular carriers of the D-30 missile system are the submarines of the Borey projects. To date, the domestic shipbuilding industry has built and transferred the fleet three ships of the basic project 955. The construction of five more submarines of the modernized project 955A is ongoing. The last ceremony of laying the submarine of the Borey type was held at the end of December last year. This year, one of the Boreev-A, which is planned to be transferred to the fleet in 2018, will be launched. A series of submarines under construction will be completely delivered to the customer no later than the beginning of the next decade.

The D-30 missile system with the Bulava missile was put into service about three years ago, but according to some information, improvements to its various components are still ongoing. In addition, it is planned to create a modernized complex, characterized by higher technical and combat characteristics. The possibility of creating an improved version of the P-30 rocket was discussed earlier, even before the completion of work on the base product, but only now some information about the goals and objectives of such a project has been freely available.

It should be noted that the emergence of requirements for increasing the flight range and the weight to be dropped should have been expected earlier. From the moment of publication of the first characteristics of the future rocket, the Bulava project was subjected to criticism, the main reasons for which was precisely the insufficient level of such characteristics. The use of solid fuel engines in combination with limitations on dimensions has led to a noticeable lag in the main characteristics of other domestic weapons of similar purpose. At the same time, it should be noted that, for example, the P-29RMU2 “Sineva” rocket, capable of flying to 11,5 thousand km, differs from P-30 in more length (14,8 m against 12 m) and a different starting mass (40 t against 38 t).

According to the latest data, the upgraded “Bulava” will have to get higher performance due to the upward processing of the structure. It is known that the P-30 rocket in the existing configuration is supplied in a transport-launch container with a length of more than 12 m and a diameter of more than 2 m. Such a product is installed in the shaft of the submarine carrier and acts as a launcher. It is obvious that the rejection of the TPK will increase the size of the rocket itself without the need to rework the launch shaft installed on the submarine. This, in turn, will provide less complex upgrading of the carrier, as well as increase the internal volumes of the rocket, allowing them to accommodate all the necessary equipment.

Nevertheless, it can be assumed that such a modernization of the D-30 complex will not be a simple task for the designers. Starting a missile from a launch shaft without a transport and launch container will require the most serious reworking of existing units of the submarine carrier, providing the required strength and performance characteristics. At the same time, due to the desire to preserve the overall dimensions of the complex as a whole, the project will face noticeable restrictions.

The need to create an enlarged rocket with new launching principles, as well as a launcher of a different design actually leads to a completely new project. Indeed, such a missile system, actively using components and assemblies of the existing one, will be a direct development of the serial D-30, but at the same time it can be considered a completely new development. In addition, the complexity of creating such a project may lead to the corresponding costs of time, effort and money.

It should be noted that the source "Lenta.ru" noted the rejection of the TPC as a considered option for the future modernization of the missile system. This may mean that the development of the Bulava project can be carried out in other ways. Some of them allow you to increase performance without changing the dimensions of the products. In particular, for this purpose, solid fuel engines with higher thrust parameters, more advanced controls, etc. can be used. With the successful modernization of the rocket according to this method, it will be possible to do without a major update of the carriers, which, in particular, will ensure the compatibility of improved missiles and existing or under construction carriers.

It is necessary to consider that the last news about the possible modernization of the D-30 submarine missile system with the R-30 “Bulava” missile with a certain reliability can only speak about the very existence of plans for upgrading submarine weapons. Only fragmentary information about the methods and methods of upgrading equipment is given, and in addition, the ways of development of the complex are indicated as considered by specialists. Thus, as the modernization project develops, current news may lose its relevance due to changes in approaches and methods.

However, recent posts reveal another important question. They show that the defense industry and the military department, having created a new model of strategic weapons, do not intend to stop there. It is planned to continue work in the field of submarine missile systems, resulting in an improved version of the Bulava missile in the foreseeable future. Most of the details of the new project, as well as the timing of its implementation are not yet specified. However, even in the conditions of such a shortage of information, it is clear that the development of strategic nuclear forces will continue.