January 25 2017
10
Embraer KC-390 is a tactical transport aircraft developed by the Brazilian aircraft manufacturer Embraer. Externally, the aircraft has similarities with the Japanese Kawasaki C-1 and C-2. Today it is the largest aircraft that was ever created by Embraer. The KC-390 aircraft is designed to transport various military cargoes, soldiers and military equipment by air, and it can also be used to refuel aircraft in the air during search and rescue operations and medical evacuation.


The KC-390 is a new-generation jet twin-engine military transport aircraft with a payload capacity of up to 26 metric tons. The aircraft was developed and produced by Embraer, a Brazilian aircraft manufacturer. In addition to her, Boeing (USA), FAdeA (Argentina), OGMA (Portugal), ENAER (Chile), and Aero Vodochody (Czech Republic) took part in the development of the aircraft. The aircraft is intended for deliveries to the air forces of Brazil and other countries, there are already preliminary plans for the sale of virtually 60 aircraft of this type.

Work on the creation of the aircraft was started in 2006 year by request of the Brazilian Air Force, the machine was created to replace the American-made C-130 Hercules transport aircraft. Initially, the new transport was named C-390. Technologists and developments used in the production of E-Jet airliners were used in its design. After it was decided to create a version of the tanker aircraft, the name of the project was changed to the current one - KC-390, in order to emphasize this feature of the aircraft. For the first time, the new aircraft was introduced to the general public in 2014, the first flight of the transport aircraft made 3 February 2015. It was planned that the flight tests of the aircraft would be completed before 2014, however, due to delays that were associated with tests of avionics installed on the aircraft and chronic underfunding of the project, it was decided to transfer them to 2015. 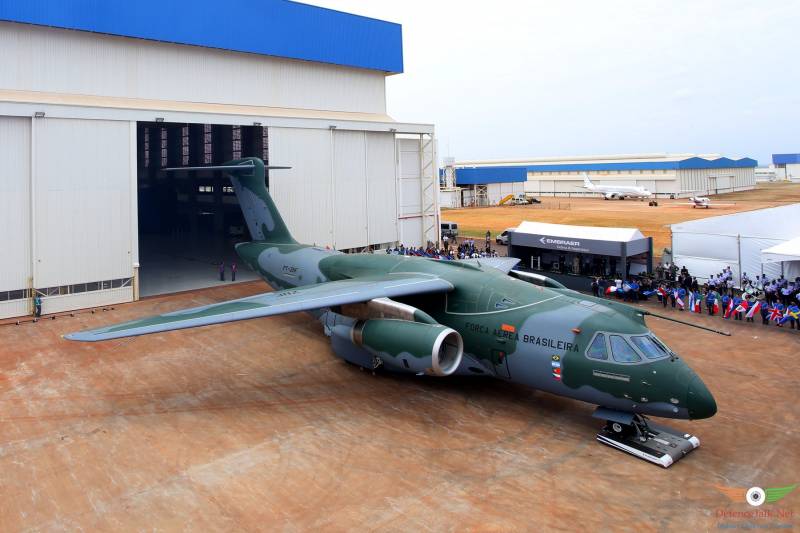 The new Brazilian military transport aircraft is a high-wing aircraft with a swept wing and two turbofan engines located on pylons under the wing. In order to provide an acceptable layout and aerodynamic properties, the transporter received a T-shaped tail unit with a high-swept stabilizer. A characteristic feature of the KC-390 airframe is a boom designed for refueling airplanes in the air; it is located in front of the fuselage on the left side of the pilot's cabin. The nose of the aircraft is rather short and curved towards the bottom, which provides the crew with a fairly good visibility from the cabin. The aircraft can be used both from unpaved and concrete runways in various, even the most extreme climatic zones, including deserts and Antarctica. 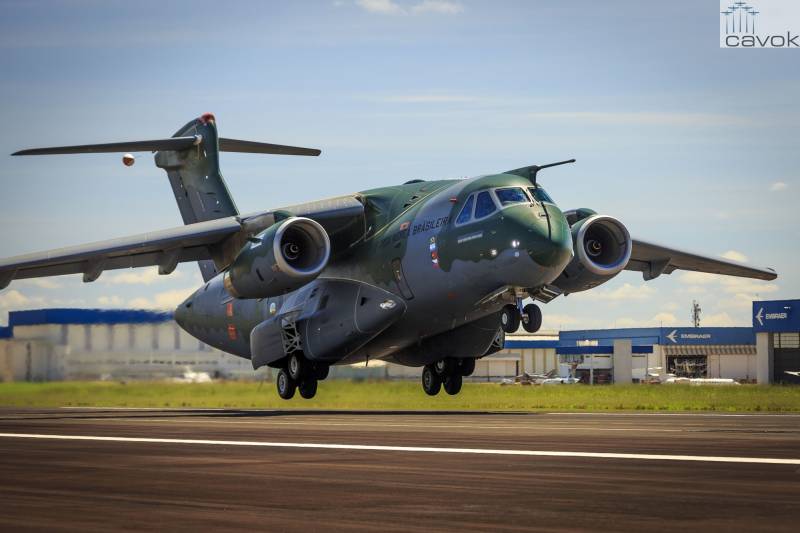 To accommodate a payload of up to 26 tons, the aircraft was equipped with a spacious cargo cabin with a length of 12,7 meters (taking into account the space above the tail ramp - 18,5 meters) and a width of 3,45 meters, the cabin is airtight. The minimum height of the cargo compartment is 2,95 meters, the volume is 169 м3. The height of the cargo compartment floor above the ground is 1,24 meters, low loading height is an advantage. For loading and unloading cargo and passengers the aircraft is equipped with a tail ramp. Its front lower flap lowers to the ground, and the upper upper flap rises to the ceiling of the cargo compartment.

In the modification of the aircraft tanker in the cargo compartment should be installed capacity for the transported fuel. The plane can quickly be converted into a version of the tanker, which can work both day and night, thanks to the installed night-vision cameras. The manufacturer claims fuel transfer rates of up to 400 gallons per minute. It is possible to refuel aircraft, including rotary-wing aircraft, at speeds from 120 to 300 nodes (from 220 to 555 km / h) at heights from 2000 to 32 thousands of feet (from 610 to 9750 meters).

The Embraer KC-390 Brazilian military transport aircraft introduced the Rockwell Collins electro-remote control, which provides: stabilization of lateral and longitudinal movement, instrument speed, barometric altitude, course heading, and automatic alignment of the airplane to a horizontal steady flight. If the system is fully activated, it will, among other things, prevent the transport worker from stalling or block control commands aimed at aggressive maneuvering. In the version of the tanker aircraft with fuel tanks placed in the cargo compartment, the crew of the aircraft, not possessing the skills of joint piloting when docked with the aircraft being filled, will be able to receive remote assistance from the ground. 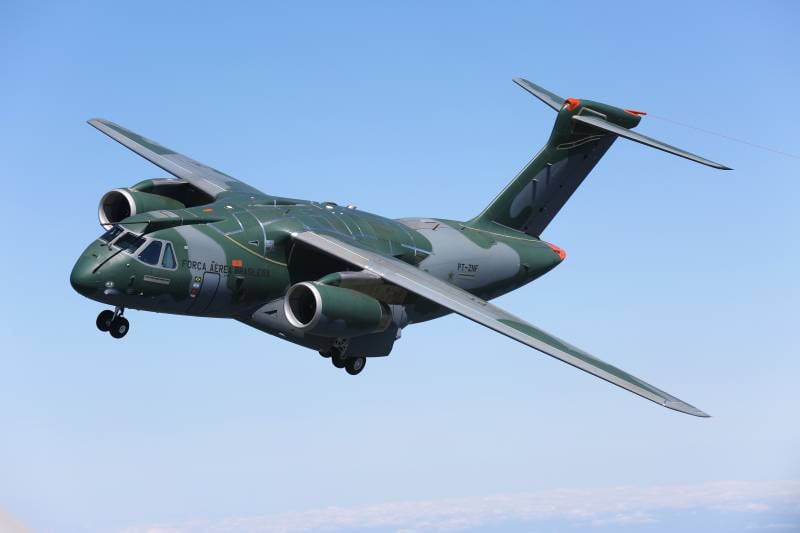 Avionics of the KC-390 military transport aircraft is recognized as exclusive for vehicles of this class. The concept of “glass” cockpit is implemented, while both pilots have HUD displays (head-up display, indicators on the windshield) - devices for displaying information that allow displaying symbolic information on the windshield against the background of the cabin environment. Also at the disposal of the pilots there is a night vision system, GPS navigation and the CARP (Computed Air Release Point) system, which allows you to open the cargo compartment door and discharge cargo at the calculated point in automatic mode. Both pilots have at hand the same set of aircraft controls. The KC-390 is controlled and monitored using the FLY-WIRE digital system, which reduces the load on the crew during the flight.

The size of the cargo compartment and the carrying capacity of the aircraft make it possible to transport up to 80 soldiers or 66 paratroopers in full gear with weapons. In the medical version, it is possible to transport wounded people on stretchers to 74 and the accompanying medical staff to 8. Embraer KC-390 can take on a single wheeled armored combat vehicle of the Stryker family with a machine a mouse 10 Blackhawk

The first test flight of a military transport aircraft KS-390 took place on February 3 2015. The plane took off from the airfield, located in the state of Sao Paulo. On the territory of the state in the town of Galvan-Peixoto are located the production facilities of Embraer, where it is planned to start mass production of this model. The first flight of the aircraft lasted 1 hour 25 minutes and managed without incident. Flight tests of the aircraft, according to Brazilian sources, are going quite well. By the beginning of November 2016, two flight prototypes of the new military transport aircraft flew a total of 650 hours. 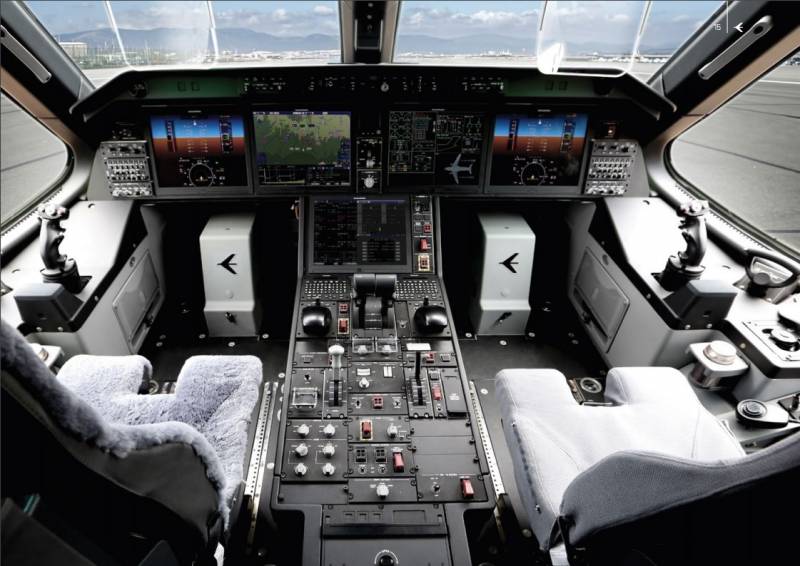 Cockpit Embraer KC-390, embraerds.com
In April, 2016, the air tests on the opening of doors and ramps. In June of the same year, the Brazilian Air Force began operational tests of the new military transport aircraft KS-390. Tests were held on the basis of Campo Grande, reports the publication "Military Parity". It is noted that the first discharges from the air of troops and equipment were completed successfully. The plane arrived at the base 13 June 2016, and the tests themselves continued until July 9. During the tests, the first group of paratroopers, the 390 man from the rescue squadron of the Brazilian Air Force, landed from the KS-18.

“There were some concerns about dropping parachutists out of the plane, as they could have been influenced by aerodynamic flows around the glider. Fortunately, there were no comments from the paratroopers, ”said Colonel of the Brazilian Air Force Claudio Evangelista (Claudio Evangelista), technical manager of the KS-390 program. The first paratrooper who made the jump from the Embraer KC-390 aircraft was the commander of the rescue squadron of the Brazilian Air Force, Major Anderson Oliveira Schiavo, followed by 17 parachutists from the rescue squadron. The landing was made from a height of 12 thousand feet (more than 3500 meters). Landing was carried out both from the rear ramp and from the side doors in the cargo compartment. The paratroopers who took part in the tests of the aircraft, noted that the new transporter was much more stable in flight, there was almost no vibration in it. In the future, the Brazilian military planned to bring more 200 troops to the test.

18 November 2016 of the Brazilian company Embraer received a temporary certificate for its transport aircraft KS-390. According to the Military Parity publication, the certificate was issued by the Institute for Industrial Development and Coordination (Instituto de Fomento e Coordenação Industrial). Its issuance indicates that the new military transport aircraft meets the requirements of the basic configuration. It is emphasized that this achievement is proof of the maturity of the technologies and technical solutions used, the effectiveness of cooperation between Brazilian and foreign companies that participated in the creation of the aircraft. The initial operational readiness of the new transport is scheduled for the second half of 2017. According to the plans, the aircraft will reach full operational readiness in the second half of 2018. 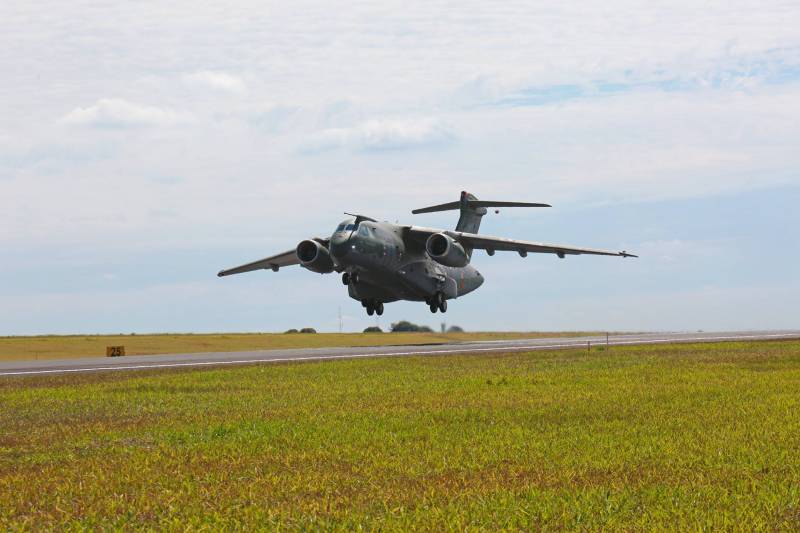 The second prototype model aircraft KS-390 in the first flight. Gavian-Peixoto, 28.04.2016 (c) Embraer
In May 2014, the Brazilian Air Force signed a contract to supply 10 28 transport aircraft KS-390 for 2016 years. According to Embraer, the delivery of the first aircraft was scheduled for the second quarter of 2018. The start of operation of the aircraft and the first deliveries were then postponed to the second half of 32. Representatives from Argentina, Colombia, Chile, Portugal and the Czech Republic have already announced their intention to acquire a total of 12 Brazilian military transport aircraft. Colombia - 6 aircraft, Argentina, Portugal and Chile - by 2 aircraft, Czech Republic - 390 aircraft. Currently, the KS-XNUMX is the largest aircraft ever produced in Brazil and in South America as a whole.

Earlier it was reported that the Brazilian Air Force financed the development and serial production of KC-390 aircraft in the amount of 12 billion Brazilian reais. At the same time, company representatives estimate the potential market of military transport aircraft of this class in 700 units (for the next 10 years). The main competitor of the Brazilian KC-390 is the American C-130J (the famous Hercules). In this case, the KC-390 has its advantages, which include greater speed and range. This is a modern military transport aircraft that will be delivered to customers with an electronic warfare system and a missile defense station with an infrared aiming system. In addition, KC-390 has a booking of vital nodes, representatives of Embraer say. 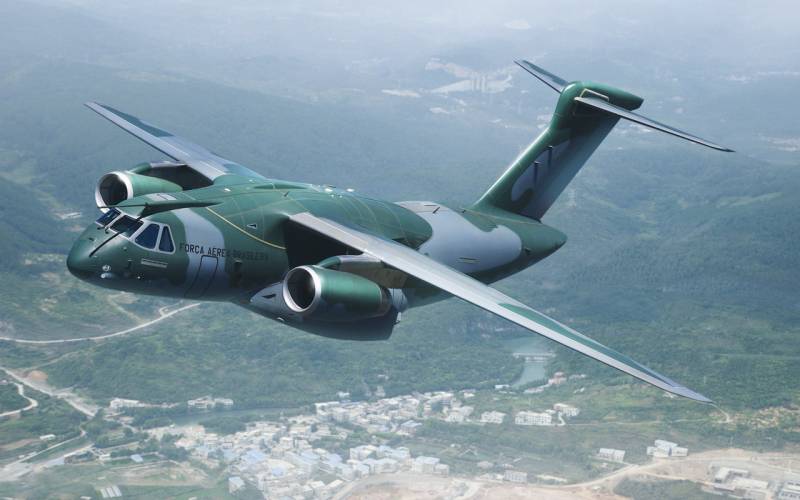 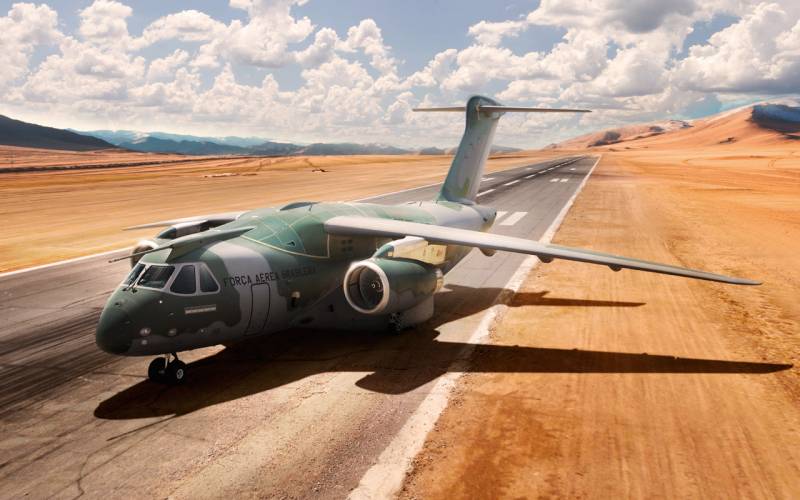 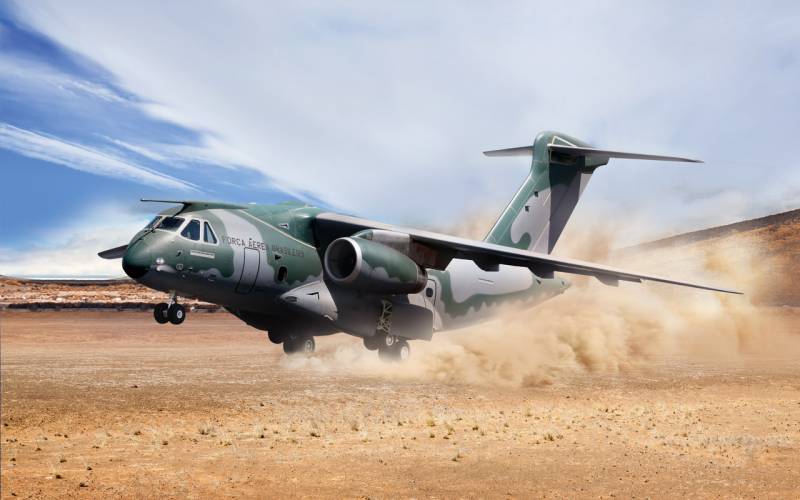 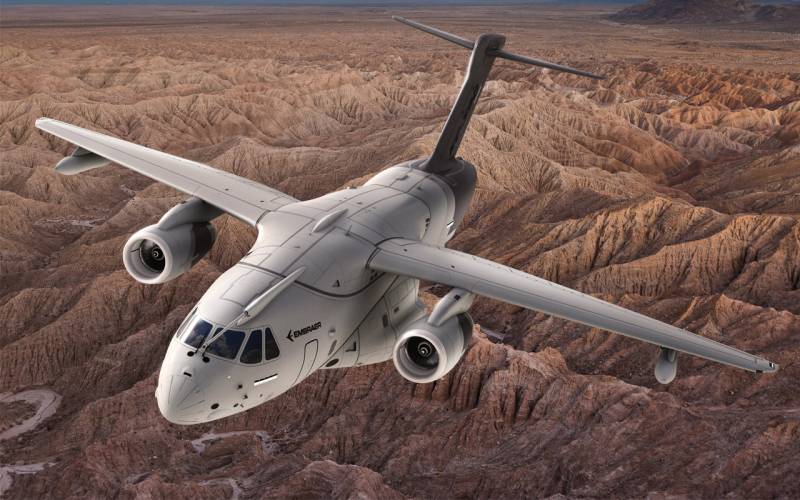