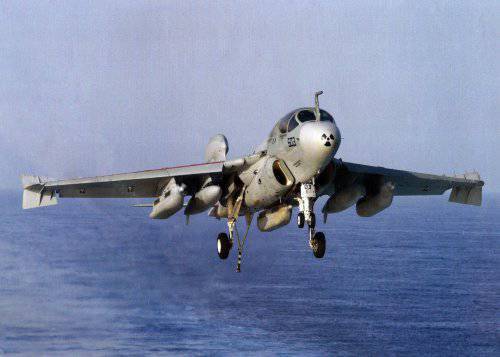 Aviation The component of the carrier’s deck crew is represented by five divisions (from V-1 to V-5), each of which is responsible for performing strictly defined tasks. The people in V-2 are busy servicing catapults and air finishers. The slap catapult officer is called “shooter,” the shooter. According to the state, the crew of the atomic carrier of the US Navy includes seven "firing", they do not belong to aviation squadrons, but to the crew of the ship. The "shooting" officer of the Dwight D. Eisenhower aircraft carrier, Lieutenant John Kerr, is on his second long-range mission. His first “business trip” lasted two months, the second began in May 2010. Kerr, an “age” officer, is 32 years old, called up as a reserve officer in the US Navy University of Rennes State, and then completed a flight officer training course at Pensacola. Next - training for the navigator of the patrol aircraft R-3 "Orion" at the air base Ren-dolph, pc. Texas, and finally completed the training course as a member of the crew of "Orion" in the patrol squadron VP-30. At the end of his service life in VP-30, Kerr decided to pursue a career in the Navy: “I dreamed of working on the deck of an aircraft carrier and chose the specialty of“ firing ”, because I loved shooting from childhood.”

Most of the "gunners" had previously been sea pilots or were on the flight crews of naval aircraft. As a rule, these people become "shooting" voluntarily. All “shooters” are trained at the USS Lakehurst airbase. Within a month, future officers of the V-2 divisions are studying the materiel, features of its operation and the rules for giving signals. Most of the training is conducted at a land aerodrome using simulators. The course ends with an internship on an aircraft carrier under the guidance of experienced officers. “During my first“ shooting, ”I watched the work of a qualified officer. I was rather a puppet than a "shooter"! The elder gunman literally took over my hands like an experienced puppeteer, ”recalls Lieutenant Kerr.

Lieutenant Kerr considers the ejection start procedure to be extremely complex, nothing like that anymore. On the bridge of the aircraft carrier "air boss" (with a capital letter - Air Boss!) Controls the actions of the calculation of the catapult by means of red, yellow and green lights. A green light means that you are ready to start the ejection start procedure, at which point the shooter must give a signal to be ready to fix the aircraft on the catapult, and the plane will taxi to the catapult track. Then the calculation secures the nose landing gear to the catapult shuttle. Then the shooter commands the pilot to start the engines. The pilot and the "shooting" inspect the deck for objects that could prevent the start.

"Shooting" is personally responsible for the safety of the take-off of each aircraft. He determines the task of each member of the calculation in the process of preparing and executing the ejection start, controls its implementation. Information about the take-off mass of the aircraft calculation receives from the pilot. Based on data on the type of aircraft
parata and its take-off mass, taking into account the corrections for wind, air density and the length of the upper stage, the installation data for the catapult are calculated. After entering the data, checking the correctness of the installation and mounting of the aircraft, the absence of foreign objects on the deck in the launch area, the command is given to take the aircraft off the aircraft carrier. 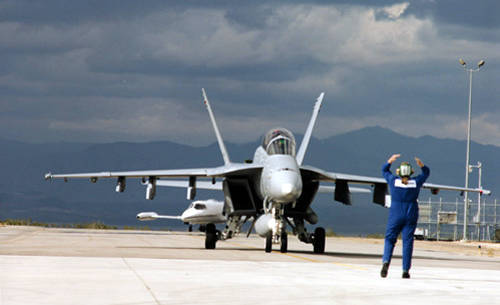 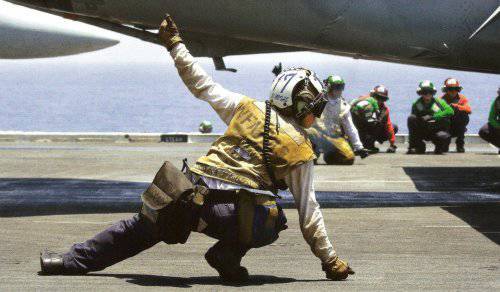 Shooting - the working day is not normalized!

Two methods of ejection start are used: from the edge of the deck and below the deck. In the first case, the shooter is kneeling directly on the deck, in the second, he is in a small room, the transparent “roof” of which somewhat rises above the flight deck. Usually the method "below the deck" is used in bad weather. “However, I prefer“ below the deck ”and in fine weather - there is an air conditioner below the deck!” Said Kerr.

The deck crew in their work uses various methods and types of communication, but most often - the radio. The entire personnel of the deck team has portable radios. Radio is used to negotiate team members among themselves and to communicate with higher managers. At the same time, radio communication is often hampered due to strong noise, especially when taking off and landing "loud" aircraft, like EA-6В, so you have to resort to light signaling or gestures, changing the position of the head and body. So that a gesture or a change in posture does not look random, a person who gives such signals fixes his posture for some time. Signal gestures and postures are different day and night. At night, light signals are applied on a much larger scale.

Perhaps the first question asked by an outsider is a question about possible accidents and malfunctions. For example, what happens if a catapult fails just before the start? In this case, an electronically firing disarms the catapult and disconnects the aircraft from the catapult shuttle. A signal about the termination of the take-off procedure is fired by the shooter with his hands crossed over his head after pressing the button to turn off the catapult. The reason for the termination of the takeoff procedure can also serve as aircraft malfunction. The work of the shooters is often complicated by bad weather, especially by the strong wind, due to which in some cases it is necessary to interrupt the preparation for takeoff.

The combination of heat and strong winds characteristic of the Arabian sea keeps the shooters in constant tension.

The authors of the article are grateful to the lieutenants John Kerr, Matthew Allen and John Feig. 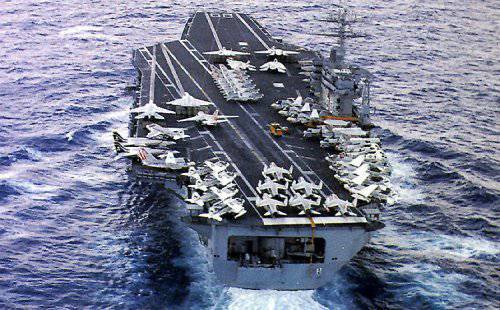 The first combat sorties from the Eisenhaura as part of Operation Enduring Freedom, the crews of the 7 aircraft flew the 28 of January. "Eisenhower", or as it is commonly called "Ike" was in the Arabian Sea until July, the rotation of the US Navy carrier groups in the region takes place every four to six months. In total, more than 2600 sorties were flown during the ship’s time in the Gulf of Oman, mainly to support the coalition ground forces in Afghanistan. Up to 30,% of daily ground strikes on land targets were carried out by crews of the 7 air wing. The most frequently used laser-guided 500-pound CAB GNU-12 Paveway II, 500-pound CAB GBU-28 JDAM with GPS correction.

Aircraft AIM-9L / M / X "Sidewinder" airborne for self-defense in all combat sorties. A typical sortie occupied the 6-7 hours. Routes passed through the airspace of Pakistan. Over the territory of Afghanistan, the planes went into the waiting area ~ strikes were delivered “on call” from the airborne duty position. In each flight, several refueling operations were carried out from French and British tanker aircraft. "Work" was carried out mainly in the daytime. During the period when the Eisenhower was located in the Arabian Sea, reconnaissance aircraft of the Iranian Air Force flew to the aircraft carrier several times.

Sunrise over the Arab Sea. The planes of the 7 th carrier-wing wing are ready to fight for the triumph of the values ​​of the Free World in Afghanistan: “You do not have Democracy? It will be soon! ”

Ctrl Enter
Noticed oshЫbku Highlight text and press. Ctrl + Enter
We are
Some features of the actions of carrier-based aircraft of the "Nimitz" type of super sucker aircraft (part 1)An-12 in Afghanistan
5 comments
Information
Dear reader, to leave comments on the publication, you must to register.