Project "ZZ". Tanks on the lawn of the White House: Trampomania as a diagnosis

January 23 2017
35
What will disgruntled Americans do with Trump? Shot? Poison? Will impeach him? Or overthrown with Putin? Or will it be the other way around, and will the trio of Trump, Putin and Marine Le Pen triumph in Washington? Or maybe Putin’s ideas, promoted by Trump, will get to Kiev, where the “Ukrainian version of Putin” will sit on the throne?


Forty-fifth President came to power in the USA. His name is Donald Trump. The inauguration of the new leader of the nation was accompanied in the United States by protest marches, scandals, mocking articles in the media and conspiracy versions of the near future.

The campaign against Trump gained such momentum that the rating of the elected (recall, not by the majority of the people, but by the majority of the electors) of the president fell, setting a kind of anti-record. Major protests took place in Washington and New York. According to some sources, several dozen prominent congressmen refused to attend the inauguration ceremony. High-ranking Democrats in various ways ignored the Republican taking the oath: many in general temporarily left Washington with their families. According to rumors, on one of the protest marches (in New York) have seen even ... Belarusian leader comrade. Lukashenko. 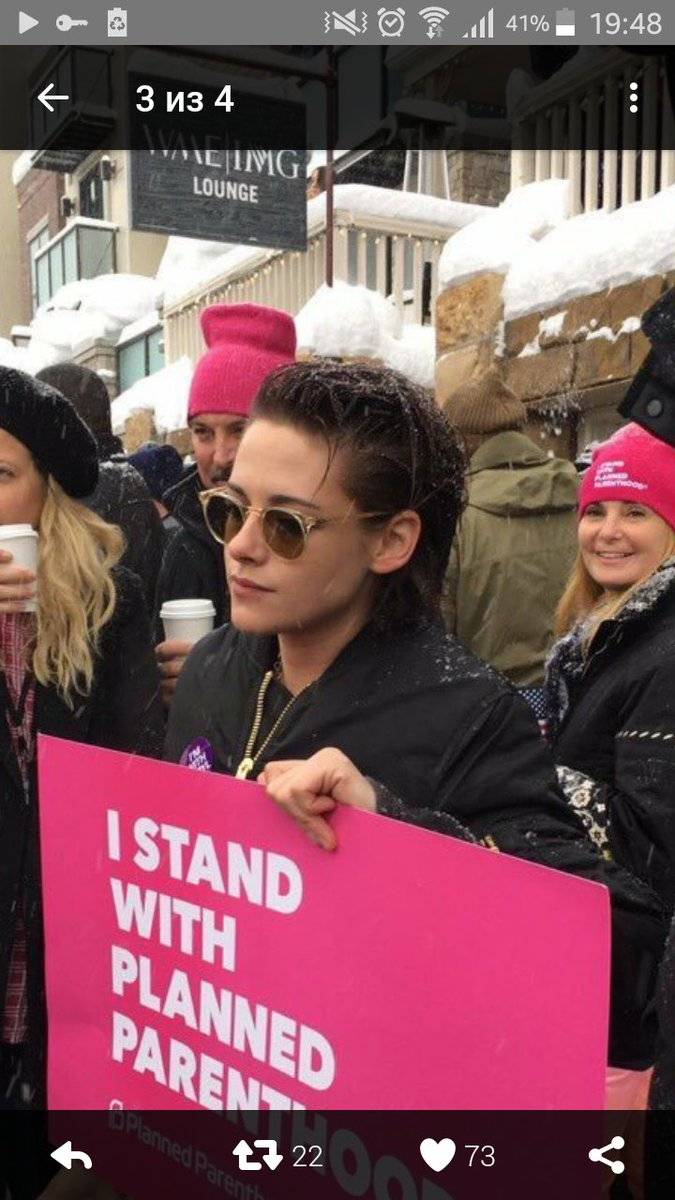 In a large article by the BBC correspondent and the New America Foundation employee Paul Wood (Paul Wood), published in "The Spectator", the author is not without evil irony talks about the future of President Trump. What will happen to this person? Will they kill him? Overthrown? Maybe they will impeach him?

The elected president took office, and now the whole of Washington says that "how bad it will end." Why so? And because the new leader of the nation was "at war" at the same time with the media and the intelligence community before taking the oath. Is it possible to assume from this that Trump, like Nixon, will eventually be forced to resign? (Recall, Mr. Nixon was the only American president who resigned before the end of the term of government.) 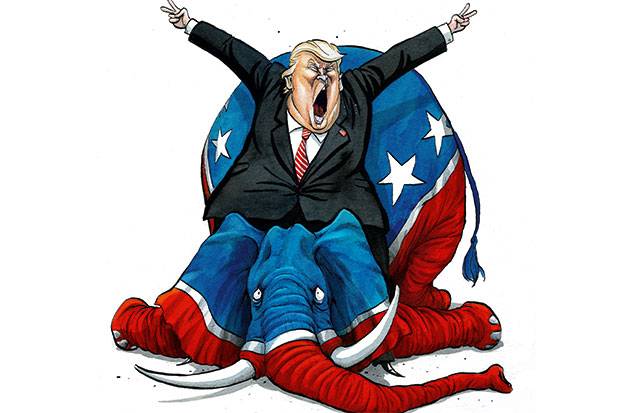 An illustration from The Spectator magazine

But it seems absurd: to ask such a question during the inauguration of the new president. And yet, the Senate Intelligence Committee has already announced hearings about “ties between Russia and those responsible for political campaigns.” The chairman of the committee (Republican, by the way) made a statement saying that the request will be decided at the “two-party” level and decides “to issue subpoenas if such is necessary to testify”. And if it turns out that Trump’s employees or friends did indeed meet with Russian officials in order to “coordinate the hacker presidential elections in the United States,” then senators would consider the word “treason” to be the appropriate word for defining such actions. This word means the largest of the crimes mentioned in the constitution. Impeachment will follow the definition.

True, Trump's people deny that any such meetings have taken place.

One of Trump's clear opponents is Congresswoman Maxine Walters, Democrat. In anger, she told MSNBC cable news channel that Trump “wrapped his hands so tightly on Putin ...” So you’ll have to figure out all of Trump's real connections with Putin. “Let's find out ... Are we in the free world sitting in the highest chair a person who can be hostage to Putin and Russia?” She says.

There are other supporters of Trump's overthrow.

Professor Robert Kuttner is making personal efforts to impeach the elected head of state. He is engaged in the creation of an "independent body consisting of highly reputable lawyers" and other high-class experts whose purpose will be to collect materials for Trump's "abuse record". The dossier will be submitted later to the legal committee of the House of Representatives, and there is a short distance to the impeachment hearings. Professor Kuttner lays hopes on a clause of the United States Constitution, indicating that an official has no right to accept gifts from foreign countries unless authorized by Congress. The founding fathers of the United States believed that the danger of foreign corruption entering the state was rather high. They meant "the infamous incident involving Benjamin Franklin, to whom the king of France presented a diamond-encrusted snuffbox." Franklin was allowed to keep the gift only after the approval of the act by the Continental Congress. However, Trump's lawyers said that they do not think that the relevant constitutional article applies to him. Trump himself said in an interview with the New York Times that “the law is completely” on his side.

There are, however, other options for eliminating Trump from power.

According to "news"The conspiracy site Infowars, Trump can kill ... the CIA. During the CIA attack on Mr. Trump, the resource advises citizens to stay at home, not to go anywhere and thus “wait out the storm”. Media at this time can not be trusted. Citizens themselves should notice whether there was a coup d'état. Alex Jones, the main man on Infowars, told the listeners on the radio that he was expecting a military coup. Proof of? Well, for example, Rosie O'Donnell, a liberal TV presenter who once quarreled with Trump, tweeted about the need to introduce a “state of emergency” in the country. It is necessary to find out whether Mr. Trump is a “Russian agent”. Jones also points out that 50 will be relocated to millions of Americans "in correctional camps."

Oddly enough, the author of the article, Paul Wood, notes, but I also heard something similar at the "immaculately liberal cocktail in Washington." It was still before the election. There were people representing national intelligence. “If Trump is elected,” said one of the guests, “it will end in a military coup.” This guest even predicted "Tanks on the lawn of the White House. "

In the meantime, other conspiracy hypotheses are multiplying. Trump is not overthrown. On the contrary, a troika consisting of Trump, Putin and Marine Le Pen will triumph in Washington. About this with enthusiasm tells Adam Lusher (Adam Lusher) in the British newspaper «The Independent». “Washington will be ours” (“Washington will be ours”). Putin himself is allegedly counting on it. The author of the article calls Trumpomania (trampomania) an amazing process of Washington’s political acquisition.

In Moscow at the night party showed portraits of Trump, Vladimir Putin and Marine Le Pen. One of the organizers of the party is Konstantin Rykov, who previously worked as a deputy and was a member of Putin’s party, United Russia, and also referred to in the press as the Kremlin web propagandist. This companion wrote on Facebook: “See you tonight. Washington will be ours. ”

Adam Lüscher also reports that the Russians, in the framework of the “trampomania”, marked the victory of Donald with the release of commemorative coins and matryoshkas. No wonder after the announcement of the results of elections in the United States, one well-known critic of Putin and former Russian parliamentarian Gennady Gudkov said that the country “took control of tramping”: everything from the media and politicians to astrologers and housewives plunged into it. “His Majesty Trump” is now the main person for Russian news. According to Gudkov, the state-run media Trump is also needed on air to cover up the “oppressive” inner truth.

The greatness of Trump and his solidarity with Putin are so great that in Kiev the appearance of a creature of either Trump or Putin - in short, the “Ukrainian Putin” is expected.

What deal can make Trump with Putin? This deal will certainly determine the order of things in Europe and can resolve the conflict between the West and Russia. The influential Ukrainian tycoon Viktor Pinchuk, the author recalls, caused a sensation when he offered to find a compromise between the United States, Russia and Ukraine through the American media. He offered Kiev to abandon plans for European and Euro-Atlantic integration, forget about the Crimea and focus on its own economic development. Two "superpowers" in exchange for this will establish peace and guarantee the territorial integrity of Ukraine (or rather, what remains of it "after the aggression"). The Ukrainian public, of course, "was outraged by Pinchuk's proposal" and denounced him as a traitor.

The main reason why Putin is so popular in Russia is the failure of liberal reforms in the 1990s, the author believes. In those years, it was customary to pretend that the transformation was under the direction of "Western advisers", and as a result, "the majority of impoverished Russians" blamed America for negative changes. Now there is the same process, but not in Moscow, but in Kiev. “If the West continues its current policy, then Ukrainian officials in power will accuse foreigners of their own incompetence and corruption, and then you will see some Ukrainian version of Putin in the office ...” This has already happened in Moldova.

To achieve a different result, the West will have to make Ukraine prosperous: to prove "the superiority of a free and open society over state capitalism." Looking at the prosperity of Ukraine, says the author, the Russians themselves will remove Putin from the Kremlin.

Russian Putin will “clean” or not “clean”, it will become clear next year. March election-2018 will be shown. So it makes no sense to guess. Guessing is not necessary and the "impeachment" D. Trump. Neither senators, nor legal activists, nor intelligence officers have yet scored such a terrible compromising material on Trump, which would lead to an urgent meeting of the relevant committees and the commencement of hearings. Trump had already been tried to glue the “prostitutes”, but the case had not yet come to perjury in the style of Bill Clinton when he was tortured with sexual issues. In addition, the foggy figures of “prostitutes” and a very specific intern from the White House are characters of different levels.

In addition, gentlemen senators, as well as democrats who are opposed to Trump, should be put off collecting compromising materials. Say, pause days for a hundred. Something tells us that Donald won’t make a dude with Putin. Trump has already explained that if Putin “likes” Putin, then this is his, Trump, an asset, not Putin.