January 23 2017
29
Over the weekend, the International Biathlon Union (IBU) issued a statement saying that it had carefully studied the reports of the representative of the World Anti-Doping Association, Mr. McLaren, and concluded that the overwhelming majority of Russian biathlonists should be justified. We are talking about 22 from 29 Russian athletes, who were unsubstantiatedly accused of involvement in the use of drugs prohibited by WADA. Previously, the list received by IBU from WADA consisted of 31 surnames. 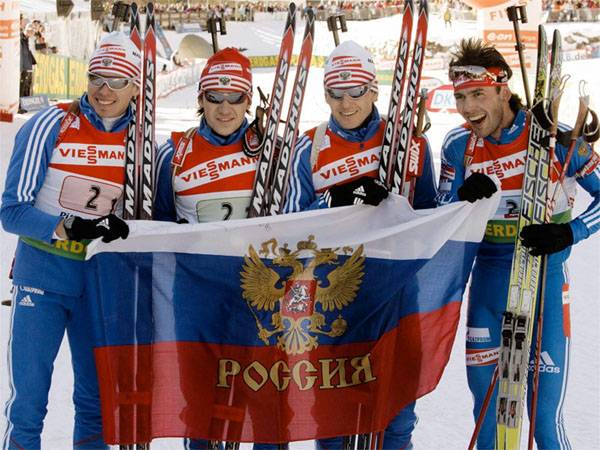 The International Biathlon Union stressed that they are not going to impose any sanctions on "clean" athletes, as they are not going to impose sanctions on the entire Russian team. It should be noted that earlier statements by various officials, both from WADA and IBU, were published, in which they said that it was necessary to remove the Russian national biathlon team from all international competitions.

The head of the Russian Biathlon Union (SBR) Alexander Kravtsov commented on the IBU decision. According to him, until February 5, the RRF will submit all the necessary documents and explanations for seven Russian biathletes, which are still being debated. At the same time, neither in the International Union of Biathlonists nor in the SBR are specific names given. However, it is known that we are talking about, among other things, the winners of the Olympics in Sochi (2014) Olga Vilukhina and Yana Romanova, who are currently excluded from the competition.

It should be noted that amid the recognition of the "purity" of 22 by Russian biathletes, the IBU decides on putting the Russian biathlon team under "special control." A “doping test pool” is being created, as stated in the IBU press release, in which all Russian biathlonists with their doping tests will be included in the near future.

Here is the information. On the one hand, it seems that one can rejoice at the fact that justice has triumphed, and the majority of Russian biathletes have been justified by SMEs after unfounded accusations by WADA. On the other hand - the reasons for the rapid fun in this regard are not so obvious.

The fact is that the creation of a sort of "doping pool", in which only Russian athletes will be composed, is unequivocal discrimination in the world of sport. In fact, for all other (foreign) biathlonists (and, there is an opinion that not only biathlonists will now apply this “method”), the rules of “asthmatics” both work and continue to work. If you are not overly “ill”, take the doctor a certificate stating that you had a runny nose last week, put it on the table to Maclaren’s companions, and get permission to use even prednisone, even hydromorphone, or Colombian or Afghani products. plantations ... WADA is known to give athletes from handshaking countries such ksivs, with whom later in the world of “sports” (in quotes, because it is difficult to call sports) sea knee-deep. Williams sisters and Norway's asthmatic biathlon team confirm.

The information that, using WADA certificates, allowed the use of doping by hundreds of “athletes” from the USA, Canada, Germany, Australia, Norway, Romania, Britain and other countries to international competitions, was published by the hacker group Fancy Bear's. The British press, citing a certain “Russian expert,” has already announced that “Fancy Bear's” is, you see, representatives of the Main Intelligence Directorate of the General Staff of the Russian Federation. Well ... "bear" ... It would be "kangaroo" or "monkey", probably, Russia would be left beyond suspicion? ..

That is, in the West, the question was not raised as to why the WADA certificate allows us to use dope, but the cry was raised about “terrible hackers” who, you know, invaded ... Like, we wanted to keep everything secret, Russians from the GRU ”uncovered us, for which it is necessary to impose a couple more tons of sanctions on Russian athletes and on Russia as a whole ...

In general, Russian biathletes are under a special glass cap, where every sneeze is recorded in order to obtain "evidence of the use of doping." At the same time, all other "athletes" - on a general basis, that is, in fact, on no ... The term "sports segregation" is suitable for such a variant of work by international officials for sports, or even sports terrorism. And Russia is accustomed to fighting terrorism in any of its manifestations - and by different methods.

Against this background, on Sunday, the German channel ARD issued another “cinema” about “Russian doping”. The words “Rodchenkov”, “Russia” and “doping” became the most used in the work of the German so-called documentaries, and therefore nothing new in the film is found. A sort of film for the sake of the film, in order to show to the customers of this “cinema” that the means are spent on a predetermined schedule. Again, no evidence, again no specifics, except for statements from Grigory Rodchenkov's “new Russian informants” about the “e-mails,” in which “everything is viewed.”

The fact that Mr. Rodchenkov himself leaked these e-mails by launching the entire mechanism of anti-Russian propaganda was lost by the authors of the film. And as if they were not in the slightest spirit about the fact that if we remove Rodchenkov's name from the materials, then all their films, along with McLaren's reports, are scattered like a house of cards. And that means for this Rodchenkov, even if it was his activity that was aimed at provocation with the provision of illicit drugs delivered from Canada and the USA to Russia, would be held as the main idol, for there is nothing else.

The most entertaining can come if all this film-making together with McLaren will be given the command “quietly!” And will be obliged to sheathe propaganda habits. In the near future, this is hardly to be expected, since biting Russia in any format is a process that gives certain pleasure to the “partners” who are accustomed to support terrorism in any of its manifestations. But it is impossible not to notice the fact that the “partners” themselves, with the homogeneity of their views and positions, lately face considerable problems.