Photo penalty: a symbol of courage 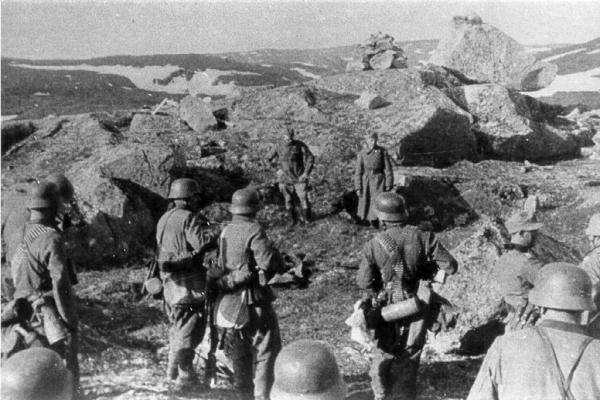 These photos of the execution of our fighters by the Nazis became the key to unraveling the mystery of their death, helped to find the grave of heroes. History fresh, found the bones of the Red Army only in July. I wrote about this in "Life" - thanks to Vladimir Dmitrievich Dulich for the pictures and help. And here is my text:


"Heroes do not die!

A unique case occurred in the Arctic - on the Kola Peninsula, the search engines found the remains of two Red Army men, and the trackers brought archive images of the times of the war to them.

These thrilling photos of the execution of Soviet soldiers were taken in 1941.

The shooting took place in Russia in the nineties - the Norwegians handed historical books about the war in the Arctic to the Murmansk neighbors. According to them, the photos were obtained from a German veteran who himself witnessed the execution of Russian soldiers.

Lieutenant Colonel Dmitry Dulich, a Murmansk regional historian, tried to clarify the circumstances of the death of the soldiers depicted in the photographs. In the memoirs of the former German mountain shooters, he found a description of the execution.

“It was the end of June 1941, the Germans had just crossed the border on this sector of the front,” Dmitry Vladimirovich tells me. - At the height of 122, our fighters captured an enemy reconnaissance group and killed the Germans in their binoculars in front of the people watching them. Only one escaped, jumping into the lake from a cliff. At night, the mountain arrows stormed the height. The resistance of the Red Army was furious - in that battle, the company of the rangers under the command of Chief Lieutenant Rode lost more people than during the entire Polish campaign.

The Germans shot the surviving fighters, staging a mob before this. By order of the commander, one of the mountain shooters filmed what was happening, and the other kept a protocol. Red Army soldiers were executed because they hated the enemy, were fiercer and braver.

Judging by the memoirs and photographs, the prisoners knew that they would not be spared. But held bravely - and in the pose, and in the eye can be seen contempt for the enemy.

“The Russians understood perfectly well why they were shot,” recalled a veteran of the German mountain rifle corps. “After all this, our commander sent all the records and film to headquarters.”

Surprisingly, the warrior remains were found after this summer, members of the military-historical reconstruction club Zapolyarny Mile, together with guests from Moscow, Novosibirsk and Kaliningrad, staged a costume battle at the height of 122. Some portrayed the Germans, others - the Red Army. Murmansk search engines Alexander Poruchikov and Nikolai Grischenko, shortly after this war game, found the remains of these two fighters under stones.

“Their bones lay at a depth of about thirty centimeters, under moss,” says Dmitry Dulich. - Everything, as it was described in the memoirs - the fighters dug their own graves right on the spot of the execution. And they found them exactly 72 years after the battle - well, how can you not believe in fate!

The names of the two heroic martyrs remained unknown for more than seven decades. But the circumstances of their death impassively fixed a photographic lens. Here it is, the truth of the war - neither propaganda lies, nor false pathos.

What did our fighters feel before shooting? Surely they wanted to live, because they were so young. Perhaps the Germans would have mercy on them if the Red Army men knelt, begging to save lives. But the Russian soldiers did not want to be saved at the cost of humiliation and betrayal. Honor for them was more precious than life — that is why the Soviet Army won that war. With their bravery, the heroes executed by the enemies conquered death. She became for them not a shame - glory. These two fighters are winners because they are stronger in spirit and braver than the enemy.

Attempts to find the remains of the executed were made earlier. The height of 122 is indicated on the map; it is not very difficult to reach it. But it was precisely the military reconstruction, the game that is often considered fun, helped to orient oneself on the ground, to find the place of execution in the old picture through the landscape! The stones in the old picture became the key, they coincided at the point of execution with the silhouette of rocks visible in the photo, like puzzles in a children's game.

Under the moss layer, the bones of two soldiers, belts, fragments of clothing, a trade union ticket were found. And in the pocket of his overcoat - great luck! - among the pre-war coins lay a black penny. In such “mortal medallions”, the soldiers of the Red Army put notes with their personal data.

The inscriptions on the paper blurred, but they managed to read. It turned out that the fighter was called Sergey Makarovich Korolkov, 1912, born. He was born in the village of Khmelishche, Seryozhensky district in the Pskov region, was married. His wife's name was Ekaterina Lukinichna Korolkova, she lived in the village of Nozdrino in the same district.

Murmansk search engines managed to find in the archives more detailed information about Sergey Korolkov. He was drafted into the army of 22 on June 1941 of the year in Kirovsk, on the first day of the war. So he went to the front as a volunteer. This assumption is confirmed by the fact that he worked in the Apatit trust, a strategic enterprise where it was possible to get a reservation. The archives found his personal card. The biography of Korolkov is ordinary, like many of the peasants, the formation of three classes, since 1931 of the year he worked at the mine as a driller. Union member, had no penalties. It looks like a mining worker’s union ticket found in the grave is his too. In 1940, a daughter was born to Korolkov. Fired 23 July 1941-th year in connection with the departure of the Red Army.

The Red Army soldier Korolkov has been killed since 30 June 1941.

The searchers found the daughter of a soldier - she and her grandchildren live in the Tver region. Finally, Nina Sergeyevna finds out how and where her father died.

The identity of the second fighter has not yet been established - according to the signs on his tunic, it is clear that he was a junior commander. But search engines hope that after archival searches his name will be known.

Lt. Col. Dmitry Dulich serves in the North Navy since 1996, he came here immediately after school. He is in love with the Arctic and knows the history of battles in those places not only from books. The defense line is still visible in the tundra and hills - it is marked not only with firing points, placers of shells, but also with the bones of soldiers.

The ridge of Musta-Tunturi, in the foothills of which the remains of the fighters were found, means “Black Tundra”. For the fascists, it really turned black. On these polar frontiers there are areas where the invaders for the entire Great Patriotic War could not cross the state border.

The selective parts of the Hitler mountain riflemen were stopped here in 1941 and could not break through to Murmansk. Remember the famous military song: “Farewell, rocky mountains”? It was written by the poet Nikolai Bukin in precisely these places, on the Rybachy Peninsula.

The obelisk, made of stone, stood on a neutral strip, between the positions of the fascists and our troops. The Germans sought to destroy it, scorching from guns and mortars. And the Soviet fighters each time restored, risking their lives.

“This is how our grandfathers fought and died,” Dulich says goodbye. - Such people can not be broken!
Grigory Telnov, first published in the newspaper "Life". 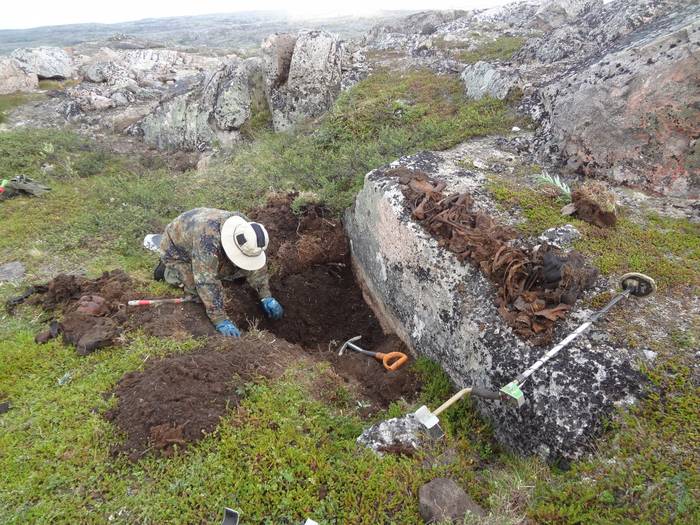 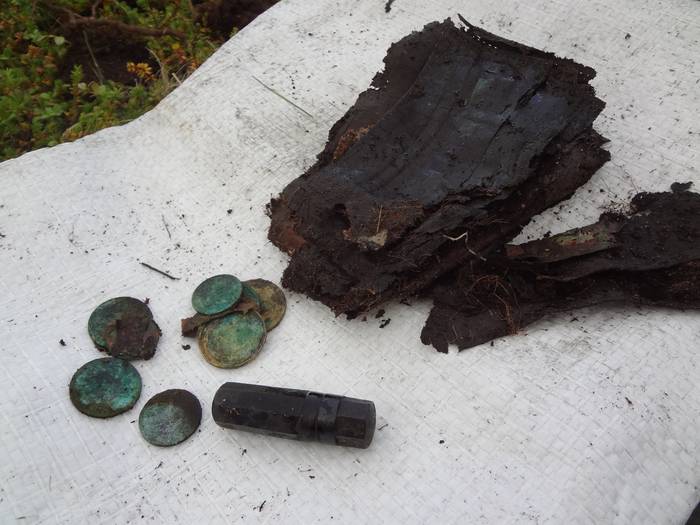 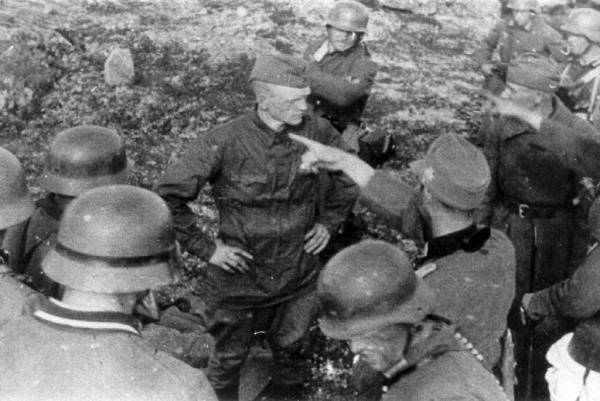 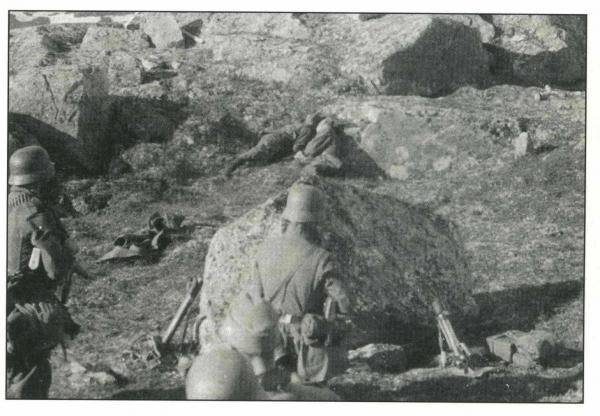