Battleship will be sunk 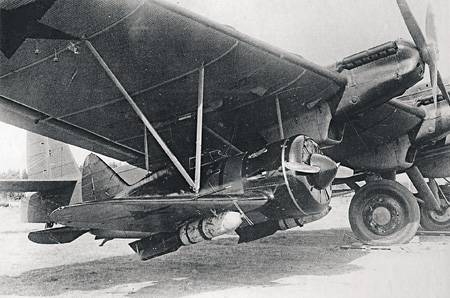 In the spring of 1939, in the "walls" of the prison TsKB-29, where the repressed during the new wave of repression were sent aviation experts, under the leadership of Andrei Tupolev, the preliminary development of the “PB” dive bomber in two- and four-engine versions with pressurized crew cabins began.


The origins of the creation of this machine have not yet been discovered, but many authors agree that this was done at the insistence of Lawrence Beria. On the other hand, the historian of the A.N. Tupolev Vladimir Rigmant according to Andrey Nikolayevich claims that the idea of ​​"PB" belonged to the chief designer. Who is right is impossible to say yet, but it is alarming that Tupolev, while imprisoned, was unlikely to be initiated into the plans of the leader. The operational information about the desire of the British to get rid of the Soviets more quickly did not reach him. Therefore, apparently, the idea of ​​an anti-ship aircraft did not come from the aircraft designer, but from the Kremlin office.

But it was impossible to hide everything, and as Sergei Eger testified, who at that time worked with A.N. Tupolev, the aircraft was intended primarily to fight the British ships. Hence it was assumed that the bomb load increased to 3000 kg and the long range compared to the front dive bombers, reaching the 4000 km in the transshipment version.

But the military considered the demands made on the car too high and came to the conclusion that for a diving bomber a normal bomb load in 1000 kg and overload load - 2000 kg are enough. The requirements for flight range, which are limited to 1000 and 2000 km, depending on the type of vehicle loading, have changed. However, the requirements for maximum speed were still very high - 580 – 600 km / h, which would guarantee protection against fighters.

When the requirements for the car almost settled, the question arose about the choice of engines. The most suitable and promising then was considered a V-shaped 1800-strong, three-row, 18-cylinder liquid cooling engine M-120ТК designed by Vladimir Klimov, equipped with turbo compressors. This engine, "folded" of the three blocks of the serial M-105, was very attractive for its seemingly developed individual blocks. But in fact it turned out all wrong. Many designers then relied on him, but Tupolev, enriched with life experience, argued differently. Where it is safer to put on the car already tested engines. And their choice was small: air-cooled M-88 and M-63, as well as liquid-cooled M-105. The first ones are easier and more convenient to use, but the high frontal resistance did not allow them to realize a given speed, so we had to stop at 1050-strong M-105.

So gradually formed the appearance of "PB". In the final form, the aircraft was a two-winged high-glider with a crew of three. His defensive armament was planned from a pair of ShKAS machine guns in the bow installation and two ShVAK cannons behind the wing to protect the machine from enemy fighter attacks from the rear hemisphere. 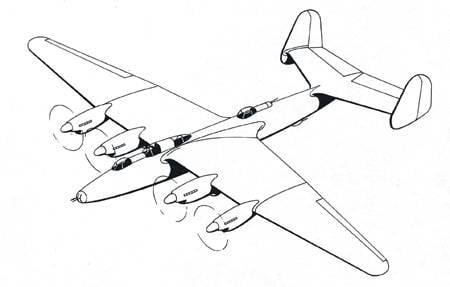 When the intentions of Britain and France to strike our oil-bearing areas became apparent (NVO spoke about these plans earlier), on January 25, Chief of the Air Force Jacob Smushkevich and military commissar Philip Agaltsov told 1940 in January, in particular, told the people's commissar of defense Clement Voroshilov:

“... the proposal of the NKVD (Tupolev group) on the construction of a four-engined plane is necessary to accept and urgently build it. Such a plane is of great interest to us.

1). This four-engined plane is slightly larger than a twin-engined aircraft (for example, the DB-3 has 66 sq. M, the proposed aircraft is 31 sq. M, and the TB-7-230 sq. M). He takes bombs inside the fuselage twice as large as the DB-3. Crew - 4 person. Production of this aircraft should be as simple as existing twin-engine aircraft.

In addition, this aircraft will be able to take a kg bomb inside the fuselage 1000 and 1500, which only a four-engined aircraft can do, and since the proposed aircraft is a diving bomber, such an aircraft is necessary to destroy existing battleships

4). As far as I know, Tupolev was engaged in the construction of four-engine aircraft, therefore it is advantageous to use it for this purpose. As for speeds, with the M-105 the proposed aircraft will be able to give 570 – 600 km / h. It is necessary to commission a second four-engined plane to build with M-120 at a speed of 650 km / h ... ".

As follows from this document, the idea of ​​"PB" was still born in the depths of the NKVD, but its specific author has not yet been established.

The reaction of the Air Force leadership to the PB is understandable, since the aircraft could not only fight battleships, but also clog the Suez Canal. To do this, it was enough to sink several large vessels in it. Indeed, the main oil deliveries from Saudi Arabia to England went through this channel, and this was tantamount to paralyzing all English fleet.

But the work on the "PB" stopped as quickly as it began. It happened, apparently, closer to the summer of the 1940 year. Some authors have attributed the cessation of work on the "PB" in connection with the start of designing a twin-engine front bomber "FB", the future of Tu-2.

I believe that this is not true, since when making such decisions, the government was guided primarily by the foreign policy position of the country. Most likely, this is due to the occupation by Germany of a large part of the territory of France, which, as an ally of Britain, has ceased to exist and its activation against the Soviet Union, and especially Germany, has plummeted. The only ally of England at that time was the United States, but between them lay a huge Atlantic.

The reason for abandoning the "PB" becomes even clearer if we assume that the high-speed dive bomber of the Saint-Petersburg system "Link" developed in KB-29 under the leadership of Vladimir Vakhmistrov in 1938 year and able to fight point targets as on land went into the arena instead. and the sea. For the time being, the outdated TB-3 bomber was used as an airbag, but variants were developed with the use of DB-A by Viktor Bolkhovitinov and TB-7 by Vladimir Petlyakov, not with the I-16, but with the MiG-3. The DB-A with its decent payload, long range and strong defensive armament was especially suitable for these purposes. But these planes were built only in five copies.

On this occasion, the explanatory note to the project for the “Pilot construction plan for 1940 year” stated:

“A number of operations of bomber aviation require interaction with fighters outside (their. - N.YA.) range, as well as the execution of bombing fighters with diving bombs caliber, exceeding the ability to take off with them. For these purposes, work should be provided on raising fighters on a bomber and attaching fighters to a bomber in flight. ”

In the same year, in the resolution of the Main Military Council of the Red Army on the introduction into service of the Link link of designer V.S. Vakhmistrov, in particular, said: "The Link" provides for the use of I-16 aircraft as high-speed dive bombers for hitting targets that are inaccessible in size for high-altitude bombing and requiring the use of heavy bombs (linear fleet ships, coastal fortifications, power plants ...). "

Shortly after the approval of the report on the results of the SPB state tests, the military ordered 40 copies of “flying airfields”, but this did not happen.

In the next year, 1939, work on the “Link” was continued, by changing the design of the bomb stops and the gas pipes to the fighter, and the pyramids for the E-95 suspension were shortened to 16 mm.

As for the most important parameter, the range of the “Link”, it remained at the same level and did not exceed 600 km, while the fighters had to return home on their own. Then everyone hoped that the task of returning the fighters could be solved, and in 1939, this work was included in the pilot construction plan for the 1940 year. But she was never brought to the end, since the device of the fighter's hitch was in a strongly disturbed air flow from the propellers and wing TB-3, and it was very difficult to dock with it.

In January 1940, the Maritime Aviation Authority entered into an agreement with the NKAP for the supply of 12 SPB Vakhmistrov - four each for the Black Sea, Baltic and Pacific Fleets. In March, the designer was given the task of developing a suspension device and dropping one BRAB-500 armor-piercing bomb, which was intended primarily for the destruction of large-capacity enemy ships. This version of the suspension was worked out under the I-16 with the M-25A engine, which by then was morally obsolete. Therefore, the military demanded to replace it with a faster fighter - type 24 with an M-63 engine. But the industry produced only five carriers, and with the old fighters - the type 5.

The rate, made on high-speed dive bombers Vakhmistrov, capable of paralyzing the fleet of the British, allowed to abandon the "PB" and expensive heavy bombers TB-7. While the country was in peace and harmony with Germany, "PB" was a burden for the Armed Forces. However, only the most approximate were aware of Stalin’s possible far-reaching plans to “curb” the British, and therefore letters addressed to well-known military were sent to him about the necessity of adopting the TB-7 aircraft. But by that time the country had a significant fleet of long-range bombers DB-3, which, although they raised fewer bombs, could solve similar tasks. At the same time, it was possible to use the TB-7 as an air strike for the MiG-3 fighter-bombers, which made it possible to increase the range of the Link almost one and a half times. In this case, the aircraft-units could successfully control the entire water area of ​​the Black Sea.

10 June 1940, when it became clear that there would be no war at sea with the British, the Navy Commissariat issued an order to discontinue work on the SPB, and on August 21, V.S. Vakhmistrov disbanded. Once again, note the date of the termination of work - 10 June. Just then, the occupation of France by German troops was completed, and four days later Paris fell. Are there too many matches?

True, what was done was not destroyed, and in the same summer two SPBs, together with the fighter suspension nodes that were in the warehouse of aircraft factory No. 207, were transferred to Evpatoria, forming the 32 th squadron squadron of the four components bombers. But it did not last long, and at the very beginning of the Great Patriotic War the carrier aircraft were dismantled, since the TB-2 bombers began to be used for their intended purpose.

We remembered about the SPB in August, when the question arose of bomb strikes on oil-bearing areas in Romania. For this, several cars were restored, and an extra ventral fuel tank was installed on the I-16, which allowed them to return to their airfield from a long-range raid. On this and ended история sea ​​dive bombers.