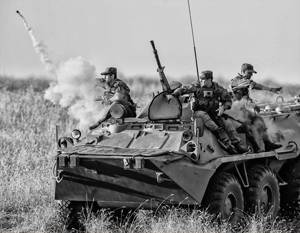 American analysts of the journal The National Interest released a new script blitzkrieg Russia in the Baltic States. If similar documents earlier predicted that the invasion would take several days, something new - "a few hours". According to analysts, the Airborne Troops capture Tallinn and Riga so fast that not even have time to realize what is happening in the NATO headquarters.


The National Interest, an American magazine, reported on Thursday, “Inosmi”, decided to argue with a report released by the Rand Corporation Research Center in February last year, which is linked to the US Air Force. That report stated that Russia, in the event of an invasion of the Baltic States, was able to reach the capitals of Latvia and Estonia in less than three days. The National Interest is confident that Russia can seize the capital within a few hours when sending the bulk of the airborne forces to the Baltic States.

"Everything will be over"

According to the scenario, Russia will launch rocket attacks and airstrikes, “which will crush the defense of the Baltic countries,” and then conduct “a large-scale operation of the airborne troops” and a limited entry of ground forces into Lithuania from Kaliningrad. “Everything will be over before the alliance understands what is happening,” the article says.
The scenario is confirmed by the data of the International Institute for Strategic Studies, according to which last year Estonia had 5,3 thousands of troops from the regular ground forces, Latvia had 4,4 thousands, and Lithuania had 6 thousands. Plus, the Estonian authorities can call on 12 thousands from the militarized Estonian Defense League, while in Lithuania there are about 11,3 thousands of militia fighters. Also in the republics on a rotational basis are the military from the western countries of NATO.

“However, the likelihood that all these forces can be instantly assembled and put on alert is extremely small - and the same goes for reservists. We also should not hope that in the event of a sudden attack, the Baltic authorities will be able to fully assemble regular ground forces - given the possible loss of the ability of governments to communicate during the first hours of the conflict, ”the newspaper writes, saying that Russian soldiers“ are much better prepared and equipped than their potential adversary. "

According to The National Interest, at best, Russia will be able to deploy only half of the airborne troops due to the lack of transport aircraft. “Nevertheless, we must take into account the likelihood that Russia can land approximately 10 thousands of paratroopers if it uses all of its IL-76 planes, which it currently has 91,” the article says.

The forecast of the journal is based on data about the Russian exercises, which were held last year by 18 and in which "airborne troops took part." “In addition, two motorized rifle brigades and a marine brigade are currently located in Kaliningrad. Their total number is 14 thousand soldiers and supported by an artillery brigade,” writes the magazine.

As the newspaper VZGLYAD previously reported, in fact, since the beginning of the 90s, the number of troops in the Kaliningrad region has sharply decreased. The 11th Army located there was completely disbanded. At that time, it consisted of more than 90 thousand people. According to open data, now the units in the region are insignificant and cannot even pose a threat to NATO from a theoretical point of view. So, in the same Baltic fleet only a few connections are included. If in 1991 it included 32 submarines, now only two remain. The number of combat aircraft in Kaliningrad also decreased by an order of magnitude.
At the beginning of 2010, according to open data, the number of ground troops of the Kaliningrad defensive region was 10 military, plus 500 of the marine corps. Also in the region there were less than 1100 tanks, about 500 infantry fighting vehicles and armored personnel carriers, at least 600 guns and mortars. Of course, the number of Baltic Fleet sailors should be added to this, but it has also been sharply reduced since Soviet times.

However, the reports of the Rand Corporation still seemed very serious to the Pentagon. In the summer, her report was used by Assistant US Deputy Secretary of Defense Michael Carpenter, who at a hearing in the Senate Committee on International spoke about the possibility of Russia seizing the Baltic states in 60 hours. So he justified the deployment of additional US forces in the size of the armored brigade combat group on NATO’s eastern flank. NATO Secretary General Jens Stoltenberg responded to the report, assuring that the alliance is ready "to protect all allies from any threats, and this is also the reason why we are now adapting our defense organization."

Foreign Minister Sergei Lavrov has repeatedly stated that the NATO leadership is inflating the myth of the "Russian threat." This is especially true of the countries of Central Europe, including the Baltic states. Russia has no aggressive intentions towards these countries.

Do not bother to look Charter

The editor-in-chief of the magazine Arsenal of the Fatherland, Viktor Murakhovsky, told the newspaper VIEW that he had read the material in The National Interest and believed that he had nothing to comment on.

“To begin with, it is absolutely incorrect to deduce the number of personnel from the number of the military who participated in the exercises. Calculate this estimated number can be, for this all you need to know the content of such a thing as "airborne operation." The fantasies of the authors are absolutely not connected with its reality, there is nothing to comment on. The compilers of the material did not even bother to look at the Airborne Forces Statute, where the main stages of this operation are marked, ”said a military expert.

Murakhovsky noted that the authors of the report mention as an example that the garrison of the Estonian Kuperyanovsky separate infantry battalion in the city of Võru is located just 80 km from the Russian military unit in the Pskov region. Analysts conclude that the garrison will be an easy target for the rockets with which the Smerch BM-30 is firing, which the Russian part is equipped with. “That is, in their opinion, the Smerch will fire exclusively from the territory of a military unit?” Apparently, they will be deployed somewhere on the parade ground, between the barracks? ”He wonders. In addition, the military expert said, 88 km is the firing range of the Soviet version of the Smerch MLRS. "Now the figures are different, but what are the military secrets," Murakhovsky added. In his opinion, the material was compiled by simply illiterate people.

"An example of degenerative military analytics"

A military expert from Latvia, Yuri Melkonov, also called the material "a vivid example of degenerative military analytics." “To say that the author of the material adhered to some methodology, for example, it calculates the approximate number of personnel in the intended operation in the Baltic States, in general, it is impossible. It is enough just to mention that never any maneuvers have developed into a full-fledged attack afterwards, the expert has told the LOOK to the newspaper. “Personally, I presented a person sitting in family underpants on the couch and writing this“ analytical ”material.”
However, according to Melkonov, the publication does not cause him laughter. “In the armed forces of the main NATO countries, in particular in the United States and Britain, there are special departments leading the information war. Such analysts are throwing such publications into the Network - in order to create a sense of danger and insecurity, in this case, among the population of the Baltic republics, ”he explained.

“This is even taught in military schools. The weak point of this, if I may say so, analysts is that the authors of such stuffing hold their audience, to put it mildly, for fools, ”the military expert believes.

In this case, according to Melkonov, the society is being prepared for another increase in the number of Western NATO countries in the Baltic States, in particular, in the US. “In the Baltic countries, there are already people who are ready to greet Americans - liberators from the mythical Russian aggressors with flowers. We will see that tomorrow Mr. Obama will be removed from work, then we will see what will happen next, ”the expert concluded.