January 23 2017
13
History One of the most unusual pre-war bombers began in the UK in 1927, when the corresponding specification for the creation of a new night heavy bomber was received. It was supposed to replace the outdated Vickers Virginia aircraft. The competition for the creation of a new combat aircraft was attended by Handley-Page (project N.P. 38), Vickers (project Type 150) and Fairey (project Night Bomber Fairey). Of the projects listed, the most promising was the Fairey project, but the British Ministry aviation so “akin” to the designs of classic biplanes that they did not want to hear anything about the mass production of monoplanes.


At the same time, such anachronisms, which already at that time had a non-removable chassis, external suspension of bombs, open cockpits, a large number of racks and braces of a biplane wing box, did not allow the aircraft to rely on high speed performance. It was all of these problems that Fairey engineers offered to get rid of, creating their own Night Bomber Fairey monoplane bomber, devoid of these shortcomings. In this model, only the chassis in the bulky fairings and a large area of ​​the wing reminded of aircraft of previous generations. However, the arguments of common sense and promising projects passed by the leadership of the British Ministry of Aviation. It was quite difficult to understand the logic of the ministry officials, as well as their great passion for biplanes, all of which led to the creation of one of the most unusual bombers that the Royal Air Force had ever armed with.

The Handley-Page aircraft was a biplane that looked very massive, which, together with the main landing gear, which had racks with fairings, suggested a low speed and low efficiency of the bomber. This impression was only reinforced by the fact that the fuselage of the aircraft was installed under the upper wing, and a rather large gap between the lower wing and the fuselage filled the racks. Such an arrangement pursued a single goal: the central part of the lower wing had almost twice as much thickness as compared to other aircraft of that period. This allowed to place in the wing a significant bomb load. In addition, the holders, which were located close to the ground, allowed the ground staff of the aerodrome to easily and quickly hang bombs. Another distinctive feature of the bomber was the placement of three defensive machine guns caliber 7,7 mm. One of them was located in a special ventral turret, which could descend below the aircraft fuselage behind the wing. 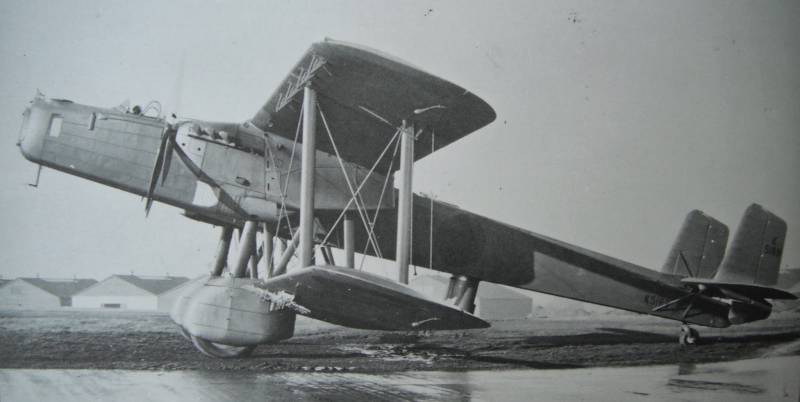 The design of the aircraft was mixed, for the most part it was metallic, but linen was used as well. The wings of the aircraft had a metal frame and linen trim. The upper wing was attached directly to the fuselage of the bomber, and the bottom was located on long racks under it. It was in the lower wing that the sectional bomb bay was located (while maintaining the outer bomb rack) with a total capacity of bomb load up to 1588 kg (3500 pounds). Also characteristic features of the aircraft were a sturdy landing gear with a tail wheel, as well as a tail stabilizer with struts to which two keels and steering wheels were attached. The chassis was also attached to the lower wing and covered with massive fairings.

The biplane scheme implemented on the plane not only facilitated the suspension of bombs for the aerodrome personnel, but also simplified access to the engines. At the same time, the cockpit was located at an all-time high from the surface of the earth — the 5,18 meter (17 feet). Placement of the crew in a bomber was fairly standard. The gunner’s seat was located in the forward part of the fuselage, behind it was the cockpit, and two more rifle points were equipped in the middle part of the fuselage. In this case, the lower turret, as already noted above, was made retractable down the type of "basket". The first version of the aircraft, designated N.P.38, was equipped with two in-line V-shaped Kestrel III engines manufactured by Rolls-Royce. They developed the power of the 575 hp, and were among the best at that time.

The first prototype aircraft first flew 12 June 1930 of the year. In the course of the next month, in parallel with the flight tests, the bomber was constantly being completed and slightly modified. At this time, his main rival in the face of the Vickers aircraft has already managed to fly 6 months, which forced Handley Page to accelerate work on the delivery of its aircraft for competitive tests at the Martlesham Heath center. However, a case intervened here. The Vickers aircraft crashed, which forced the transfer of competitive tests, they were postponed until February 1931. But then the Fairey aircraft already had an accident. Thus, the time of the competition was once again postponed. This time went to Handley Page for the benefit; they managed to eliminate most of the identified shortcomings of their prototype heavy night bomber.

As a result, the HP38 aircraft was transferred to Martlesham Heath only on October 3 1931 of the year. After some minor additions, he was handed over for military tests, which lasted until April 1932. Tests of the aircraft finished with positive ratings. He liked both the Ministry of Aviation and the pilots who piloted it. The characteristics of the bomber corresponded to those stated in the requirements of the specification for development, and during the tests with him there was not a single serious incident. At the same time, low flight speed and overall cumbersome design were not considered significant shortcomings at that time.

In the fall of 1932, the Handley Page bomber was declared the undisputed winner of the competition, as its most dangerous rival, the all-metal monoplane Night Bomber Fairey (future Hendon bomber), after an accident in which it hit the spring 1931 of the year, got up for a long overhaul. At the same time an order was made for the construction of 5 pre-production bomber, called "Heyford" (after the name of one of the cities in the UK). But the release of the aircraft did not start immediately, it was significantly delayed due to attempts by participants in the Geneva Conference to recognize the bombers banned. weapons.

Only in March of the following year, the Handley Page company received a contract for the construction of the 15, a little modified bomber, which was designated N.P.50. The full name of the aircraft is Handley Page HP50 "Heyford" Mk.I. Deliveries to the military aircraft of the first batch were completed in the middle of 1933. After that, another 23 bomber was assembled in the Mk.IA modification; they received the Kestrel III S-5 engines. In 1934, the power plants were replaced with the updated engines of Rolls-Royce "Kestrel" IV with the power of 640 hp. Bombers with these engines in a modification of the Mk.II were assembled 16 pieces. Mass production of heavy night bombers Heyford was completed with the assembly of 70 machines in the Mk.III modification, they were produced from September 1935 of the year to July of 1936 of the year. In addition to minor improvements in this version, improved Kestrel IV engines were installed, which developed the power of the 695 HP. In total, the British industry produced the 124 serial heavy bomber N.R.50 "Heyford" of all modifications, including the prototype - 125. 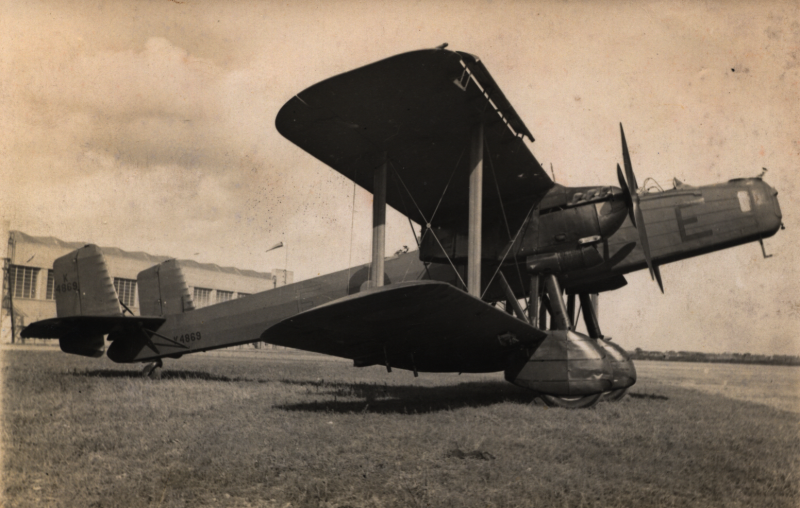 At the same time their drill career in the Royal Air Force has developed in more than a modest way. The RAF First Squadron was re-armed with new bombers in November 1933. By the end of 1936, the Royal Air Forces already had 12 night bomber squadrons that were armed with N.H.50 “Heyford” planes, in which they had replaced the “Virginia” planes that were noticeably outdated by that time.

The operation of these bomber in the RAF was short-lived, but quite intensive. In the prewar period, the main task, which was set before the night squadrons of bombers, was to work out bombing attacks on objects located in the territory of continental Europe - in France and Germany. Moreover, greater preference was given precisely to the French territory. Training flights were performed with enviable regularity, thanks to which British pilots gained valuable experience of departures at night. A significant role in the intensity of training flights was played by the high reliability of Heyford bombers.

In service with the Royal Air Force aircraft did not last long. Already in the 1937 year, that is, a year after the assembly of the latest version of this bomber, their decommissioning process began, which was fully completed in the 1939 year. British squadrons re-armed with new types of aircraft, which were more suitable for the battles of the coming war. The complete rearmament of the night bomber squadrons managed to finish in September 1939 of the year, just in time for the start of the Second World War. 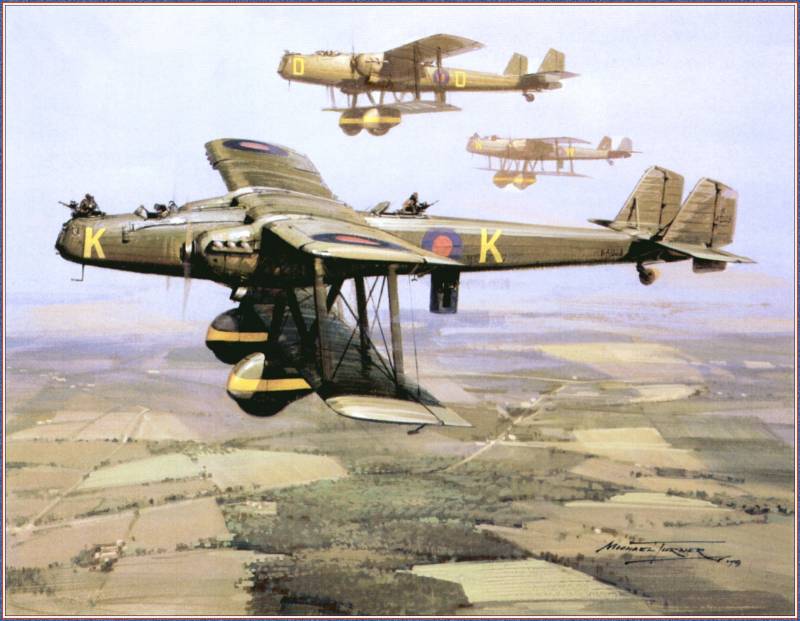 Meanwhile, the HP50 “Heyford” heavy biplane bombers continued to operate as training and auxiliary aircraft until the middle of 1940. They were transferred to the 3 and 4 training schools, where they were trained for more advanced combat vehicles. Part of the aircraft until July 1941, was used as towing targets, they also took part in a variety of experiments with conducting refueling in the air and radars of the air defense system. They were also used as gliders' towers "Hotspur" in the preparation of British airborne units. In 1944, one of these bombers was rated as suitable for flying, but the question of its further military fate was not raised. This unusual aircraft, created in Britain in the period between the two world wars, was the last combat biplane bomber, which was in service with the Royal Air Force. 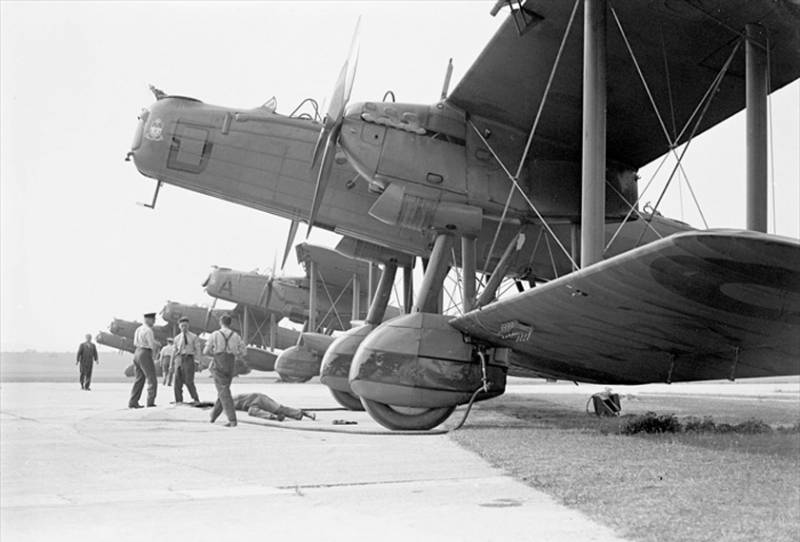 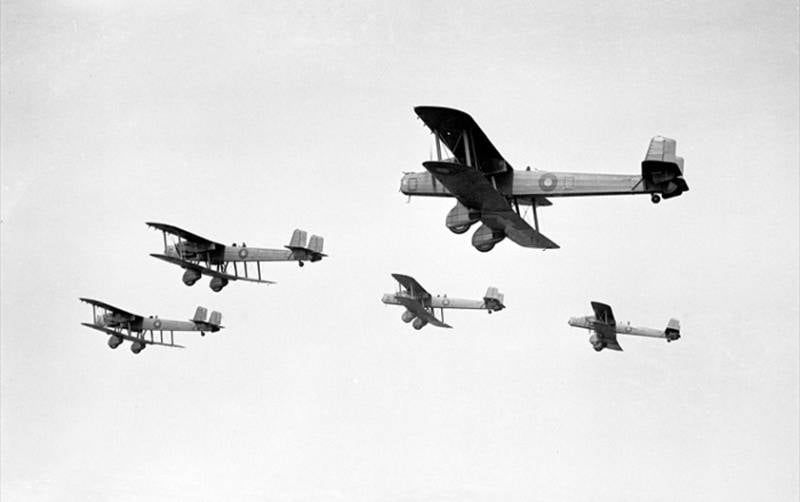 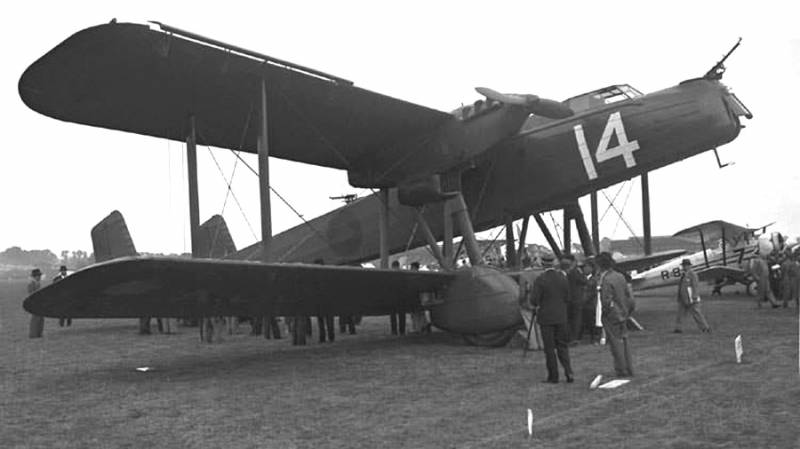